'Usually, only the impression of grandeur remains' 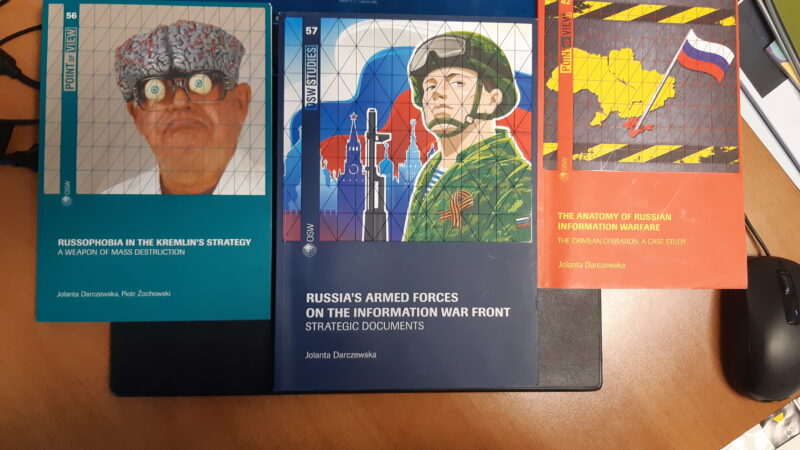 Books at the Centre for Eastern Studies (OSW): ‘Russophobia in the Kremlin’s strategy. A weapon of mass destruction,’ ‘Russia's armed forces on the information war front‘ and ‘The anatomy of Russian information warfare. The Crimean operation, a case study.’ Photo by Truthmeter.mk (CC BY 4.0)

This analysis by Prof. Mirjana Najchevska, an expert on the rule of law and human rights, was originally published by Truthmeter.mk. An edited version is republished in two parts by Global Voices as part of a content-sharing agreement. Read part 1 of this article here.

Much of the news related to Russia’s military equipment and military power, which is further transmitted on certain portals or even in reputable media in North Macedonia, is downloaded from the Russia Beyond portal. Most often in such cases, this portal is not indicated at all as a source of information/data, nor is it mentioned that the information is part of a network of media funded by the Russian government, which includes the parent publication “Российская газета” and Russia Today (RT). 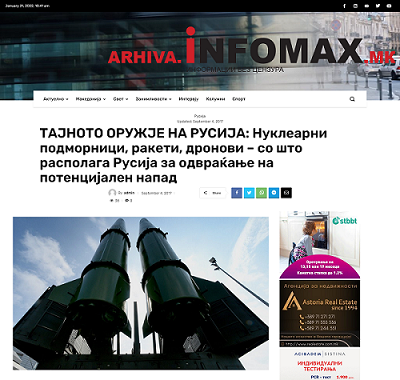 Printscreen of an article by Infomax.mk entitled ‘RUSSIA's SECRET WEAPON: Nuclear submarines, rockets, drones — what Russia can deploy to avert a potential attack.’

In building the impression of grandeur and fostering a fascination with Russia’s military power, some secret and brand-new weapons are often talked about.

No specific conclusions can be drawn from the articles presenting Russia’s military power (obviously that is not the purpose of those articles), nor are any negative connotations of such military power mentioned. Usually, only the impression of grandeur remains.

This type of article is frequent in situations of potential conflict involving Russia as a party to the conflict, such as the latest example with Ukraine.

At the beginning of the rise of tensions related to Ukraine, the media in North Macedonia did not have too much analysis on the topic. It is interesting that in some of those that were made, there was more talk about what is bothering the Russians than about what worried the Western European countries. In some of the information related to the conflict over Ukraine, some Macedonian media very openly take sides with the use of appropriate wording and context in which the statements of senior officials on both sides are transmitted.

The portal Lokalno relayed positions of the Russian embassy in U.S.: “Allow us to remind you that Pentagon spokesman John Kirby stated that Russia is allegedly preparing an excuse for the invasion of Ukraine, without providing evidence for those allegations …”

“Until the evidence is presented, it will be considered fake news and false accusations against Russia,” the portal Observer concluded in an article based on statements by a Kremlin official.

The number of columns analyzing the relationship between Russia and Ukraine in the light of European values ​​was even smaller. One of the few columns in which an attempt is made for a balanced approach, which tries to correlate with the developments in Macedonia and the attitude of European countries towards it, was published by Factor in 2019.

The next level was to develop a positive perception of Russia’s military power and to accept their actions as desired. In articles such as “Peacekeepers withdraw from Kazakhstan” published by the Express in January 2022, they become peacekeepers, with a clear peace role. Sometimes a positive perception is well packaged in a seemingly objective text.

This impression is emphasized by the quiet admiration for Putin’s tactics or “NATO disunity” and Western European countries, i.e. the “Western” disinterest in Ukraine, as well as by the one-sided portrayal of Russia as a victim.

In the context of the large presence of articles from the Serbian media that nurture a negative approach to NATO, this is gaining momentum.

The number of information and articles on the relations between Russia and Ukraine that show the overall situation and from another perspective is increasing with the growth of the possibility of conflict, i.e., the entry of Russian military forces into the territory of Ukraine in the last weeks of January to gain enormous proportions. In January 2022, articles appeared for the first time talking about military power and military assistance that the United States and NATO are beginning to manifest/provide in relation to the conflict.

There are still no analyzes by local authors, but the source of information (at least in the larger established media) is, above all, the Western media.

The information that tries to give an objective picture of the situation is gradually gaining in number and largely “covering up” those who continue to broadcast anti-NATO content in some of the media and content that belittles any form of sanctions in the event of possible aggression by Russia, i.e. such aggression is presented as moral and justified.

However, the problem remains with the transmission of content that very openly promotes support for Russia in the conflict with Ukraine through social networks. Namely, the official information and the transmission of the escalation of the conflict given in a number of media are not transmitted further by the social networks, unlike the content in which Russia is supported, which is transmitted through Facebook groups and informal groups that organize protests and declare themselves open opponents of NATO and silent supporters of Russia. Moreover, on informal portals and websites that do not have an impressum and transparent information about the ownership, such content is produced by people that some citizens perceive as serious journalists.

In recent years, Macedonian politicians in power have rarely spoken out about relations with Russia. When they do, they usually try to sound democratic and politically correct and not place open accusations against Russia.

For example, in 2019, Prime Minister Zoran Zaev commented on an incident with Russian pranksters, which was officially described as a “hybrid attack” by government officials, that it was “not an act by the Russian Federation, a country that is our friend.”

Regarding Russia’s conflict with Ukraine, the newly appointed Minister of Defense Slavjanka Petrovska gave open support to Ukraine for the first time on January 23. This statement was transmitted by a number of media in North Macedonia, but also caused an avalanche of insults and attempts at humiliation (which are again used to emphasize Russia’s military power).

In contrast, open support for Russia, even in the conflict with Ukraine, is given by a very small number of politicians and they are usually in the opposition. An even smaller number of politicians currently involved in government structures make statements that openly support Russia and oppose Macedonia’s NATO orientation.

One of them is MP Dimitar Apasiev, who belongs to the political party Levica (“The Left”), a party that won two seats in the 2020 parliamentary elections, and which in its election program clearly states that it is committed to Macedonia leaving NATO. Media reporting on his activities had mainly quoted party announcements.

The leader of the party Levica, Dimitar Apasiev, met with the Ambassador of Russia in Skopje, Sergei Baznikin, in the representative “Struga Room” of the Assembly of Republic of North Macedonia. The MP’s party [Levica] says that the professor and the diplomat, among other things, discussed the famous tweet with which the Minister of Foreign Affairs Bujar Osmani gave his support to the United States in dealing with the tensions on the Russian-Ukrainian border.

Apasiev’s statements are aimed at a positive perception of Russia.

It can be concluded that in some of the media, portals and websites within the social networks in the Republic of North Macedonia, a channel has been created for constantly and quietly building a positive attitude towards Russia’s armed power and fueling the fascination with its magnitude.

It is very difficult to determine the true impact that this kind of information has on the general public, but the fact remains about the constant presence of this type of perception that can be easily thrown to the surface and multiplied in times of crisis and especially in conditions of growing dissatisfaction in the country from the (non)support it receives in the European integration processes.