#StandWithUkraine: Protesters in North Macedonia call for an end to ‘Russian aggression’

Protesters shouted "Putin is a fascist, Putin is a murderer" 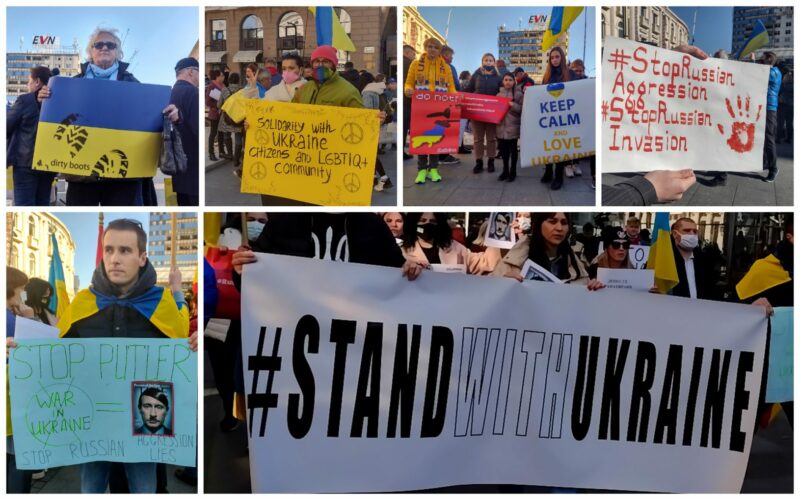 Dozens of citizens of North Macedonia and Ukrainians residing in Skopje protested against the Russian invasion of Ukraine through a march from the main square of North Macedonia's capital to the Russian embassy on February 25. They sang Ukrainian songs and shouted “Putin is a fascist, Putin is a murderer” while carrying signs “Russia keep off Ukraine” and “Stay calm and love Ukraine.” 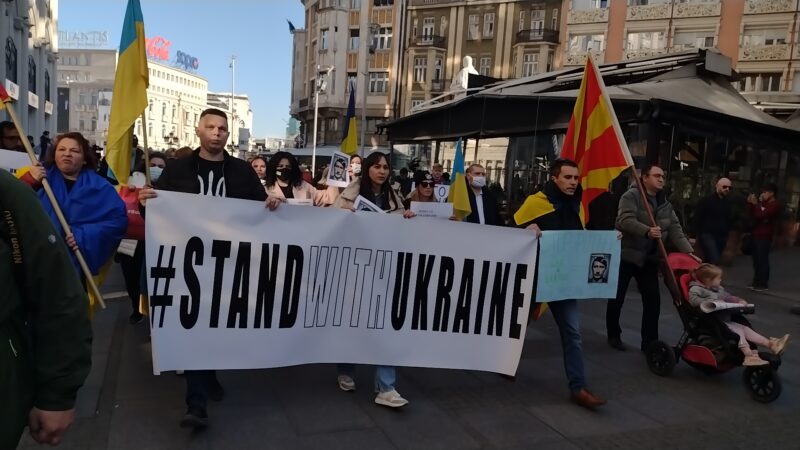 Many of the protesters interviewed by Meta.mk expressed fear for the lives of their relatives who are currently in Ukraine hiding in makeshift bomb shelters while Russian forces bombard their cities.

“I'm full of emotions, I can't restrain myself. My family is in Ukraine, and we are all the same. We are all one family. Every minute I write to my relatives: Tell me if you are alive? God protect Ukraine, protect the soldiers, they defend us,” a tearful Olja Obrezhina said to a Meta.mk reporter. This statement in Ukrainian is in the following video:

After the march came near the Russian Embassy, the protesters stopped in front of a police cordon about 20 meters from the embassy fence. The president of the Association of Ukrainians in Macedonia, Aleksandar Panovich, gave a statement for the media while standing among protesters carrying Ukrainian symbols and anti-war signs, as well as posters presenting Putin masked as Hitler. Panovich said:

Our main message is for Russia to stop the war, to take  their army back home. Starting a war is shameful. Our message is for them to make a diplomatic agreement. The Ukrainian people are ready to fight, they are ready for war. But we don't understand why they bomb us, why do they bomb peaceful cities with rockets. 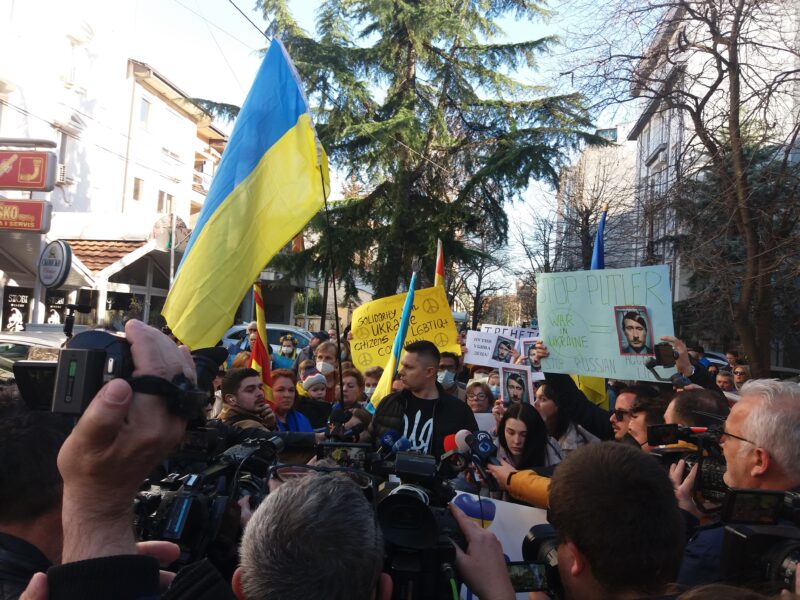 A journalist from Afghanistan who identified himself as Karan also spoke in front of the Russian embassy, and highlighted that he knows how it feels to be exiled.

I came to give support to Ukraine, because I know how it feels to be banished from your own home due to war and aggression of outside forces. 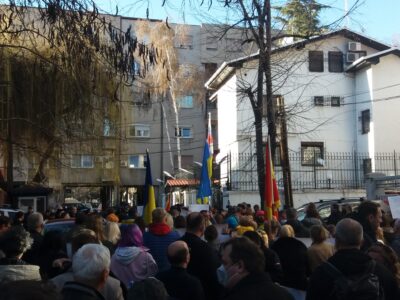 Ukrainian citizen Andrej Hafenic called out Russia for being an aggressor:

Russia  is the aggressor. In the 21st century we have been forced to come to the embassy of the aggressor and tell them it's not normal for people to get killed so Putin can remain in power. Our military is capable of resistance, but we reiterate, diplomacy should come first. This conflict should be solved at the diplomatic level, to stop the war and to achieve peace. Peace in Ukraine, peace in Europe, peace in the Balkans.

Kujtim Osmani, one of the local citizens present at the protest, expressed solidarity to Ukrainians:

We want the people to know what Putin does in Ukraine, that this [war] is a human rights violation. I am sorry for all those little children and mothers who suffer. I don't have family or friends in Ukraine, but  I accidentally saw [the information about the protest] on Twitter and came to express my support. It's saddening what happens to the people. 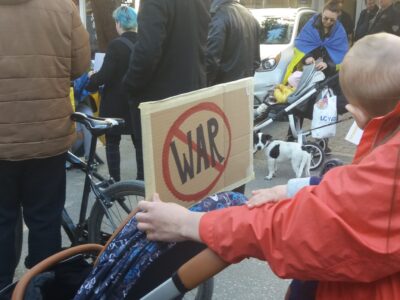 “No war!” sign held by a mother holding  a baby at antiwar protest in Skopje, North Macedonia, February 26, 2022. Photo by Meta.mk, used with permission.

Three days before the protest, the Association of Ukrainians “Lesya Ukrainka” (named after a 19th century writer) and representatives from the Ukrainian Embassy also organized a joint action at the Taras Shevchenko monument in the center of Skopje, under the motto “united for Ukraine”.

The aim of that public action was to demonstrate togetherness and unity of Ukrainians around the world and support Ukraine's right to choose its own future. At the occasion, the president of the association Aleksandar Urbanovich said:

Ukraine is at the front line of defending democracy and freedom. We call for a united front that will strive for the protection of joint European values and will remain determined to oppose the aggressor. Even when we are abroad, Ukraine remains in our hearts and we stand together with our homeland! 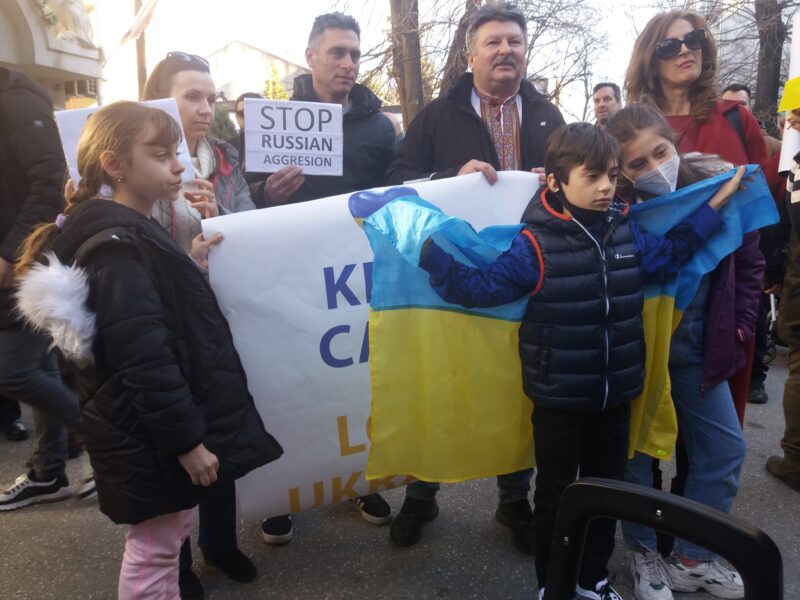 A family at the protest in Skopje, North Macedonia, February 26, 2022. Photo by Meta.mk, used with permission.

Thousands of Ukrainians living in European and American cities and their friends protested in front of Russian embassies and consulates around the world to send a message of stopping the Russian invasion over Ukraine.