Georgians rally in support of Ukraine as MPs scramble for response

People take the streets as the government issues a resolution 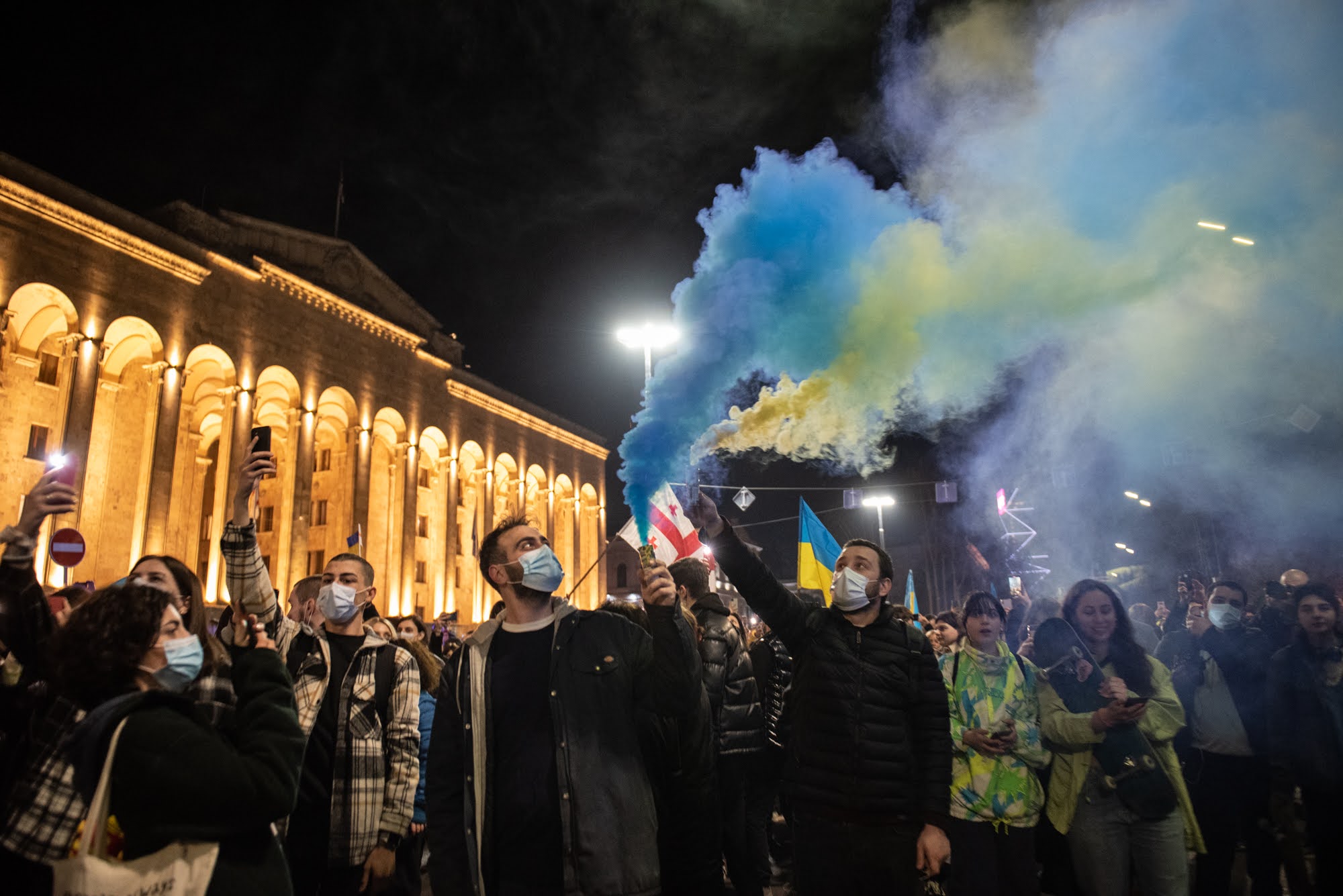 Supporters of Ukraine marched along the central Rustaveli Avenue on Thursday, February 24, forming human chains, waving Ukrainian flags, and lighting yellow and blue flares outside the Parliament building in Tbilisi. A parallel rally was held outside the Ukraine Embassy in Tbilisi.

This is Tbilisi right now. Thousands are forming into a human chain to express support to Ukraine. #StandWithUkraine pic.twitter.com/dZJi097p1v

After demands from several opposition groups, Georgian President Salome Zurabishvili said she would convene an extraordinary session of parliament on Friday, February 25, in response to the crisis.

In Georgia, parallels have been drawn to the 2008 five-day war between Russia and Georgia in the latter's two separatist regions of South Ossetia and Abkhazia. Tensions escalated when Georgia expressed interest in joining NATO in 2008, ending in a war that cost hundreds of lives, displaced tens of thousands, and left both territories in a state of frozen conflict. During this conflict, a six-point peace deal was signed between Russia and Georgia on August 16, 2008, negotiated by then-French President Nicolas Sarkozy in his role as European Union president. Ten days later, Russia recognized Abkhazia and South Ossetia, earning widespread condemnation by Western leaders.

🇬🇪 strongly condemns Russia’s « recognition » of 🇺🇦Ukraines’s Donetsk and Lugansk regions, repeating the scenario that led to the occupation of 20% of our territory. 🇬🇪stands by you Pdt Zelensky and in support of🇺🇦 ‘s territorial integrity and peace.

Giorgi Gakharia, the former prime minister and current leader of the opposition For Georgia Party, wrote that “[the] West should not repeat the same mistakes as in 2008. Allies must act now! We #StandwithUkraine!”

The Droa party, led by Elene Khoshtaria, meanwhile, urged the international community to supply weapons to Ukraine and to step up sanctions on Russia.

“We urge our international partners to use personal as well as economic, financial and diplomatic sanctions as an immediate, effective and unified response to the Kremlin's aggression,” the party said in a statement.

On February 1, the Georgian Parliament adopted a resolution that failed to mention Russian involvement in the ongoing crisis. While the resolution referenced “possible military escalation in Ukraine” and said that Ukraine and other countries should have the right to join NATO, Georgian Dream MPs stopped short of naming the obvious source of the threat to Ukraine's “sovereignty and territorial integrity” — the Russian Federation.

Members of the opposition parties, including the United National Movement (UNM), expressed anger that Russia was omitted from the resolution. In January 2022, the opposition parties drafted a separate strongly worded declaration about Russian aggressions and collectively signed the document outside parliament. They have since published it online for the public to sign. The document expressed “grave concern over Russia's military escalation and [condemned] its threats on the use of force against Ukraine's sovereignty and territorial integrity.”

In their defense, Georgian Dream's parliamentary leader, Mamuka Mdinaradze, described the language of the declaration as “free from populist and provocative rhetoric.”

As a result, Georgian Dream MPs largely voted alone on the parliamentary resolution in support of Ukraine.

In the adopted resolution, the Georgian Parliament insisted that NATO membership was the “sovereign right of any state and any attempt to curtail this right with the use of military or political instruments is categorically unacceptable.”

“Arms supply not a solution”

Criticism of the government has ramped up since Thursday's invasion over what opposition groups have largely described as their failure to properly protest Russia's actions.

After being challenged on Georgia potentially joining sanctions on Russia in an interview hours before Russia's invasion into Ukraine, Georgian Prime Minister Irakli Gharibashvili ruled out doing anything that would “potentially worsen the situation for the country or work against the interest” of Georgians.

During the same interview, which aired hours before Putin announced that he had ordered Russian forces into Ukraine, Gharibashvili went so far as to criticize the supply of arms to Ukraine.

“As you know, America was the biggest donor in this direction and made the biggest contribution with arms, as well as several European countries. But obviously, this is not enough and generally, I would like to say that supplying arms is not a solution in this situation. Any conflict should be resolved through negotiations.”

The Georgian government also faced criticism on February 23 for shaming Georgians who supported Ukraine during the Russian–Georgian rugby match, slated for Sunday in Tbilisi. The match was eventually canceled.

After Russia officially invaded Ukraine, Prime Minister Gharibashvili and the Foreign Ministry released more strong-worded statements. The PM called Russia's actions against Ukraine a “blatant violation of international order” and called on the international community to do everything possible to stop it.