Russia and Latin America: So far, and yet so near

In its defiance of the West, Russia aims to strengthen its position in the world 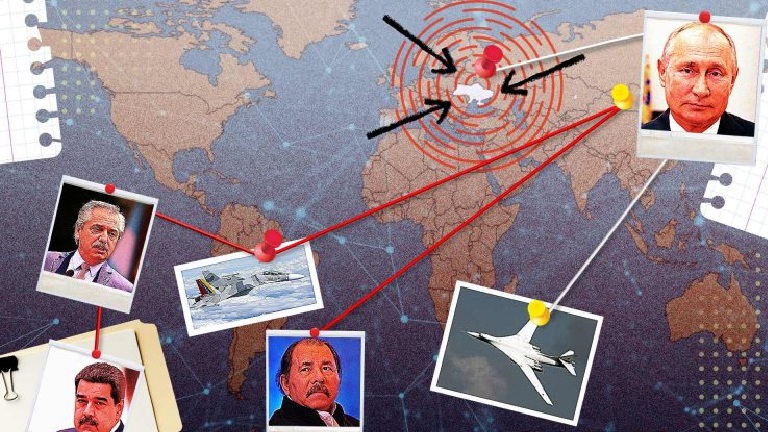 This article was originally published in Connectas. An abridged and updated version is published by Global Voices under a content-sharing agreement.

“The most consequential thing that has happened in the world in terms of war and peace since the Second World War.”

This is how U.S. President Joe Biden described what a Russian invasion of Ukraine would mean for the United States. Biden declined to elaborate further on the likely consequences of such a situation, nor is it necessary — no one would be oblivious. Then, on February 24, Russia attacked Ukraine.

But how, and with what effect, could such a conflict — one that does not de-escalate despite all attempts — have on Latin America?

To try and reach an explanation, one must first try to understand the long and complicated love-hate relationship between Russia and Ukraine. The narrative that Ukrainians and Russians are one people is the main argument Vladimir Putin is using to justify what he is really hiding: that he would like to turn his neighbour back into the satellite state it was for much of the 20th century, serving Moscow.

Vladimir Rouvinsky, a professor at the University of Icesi in Cali, Colombia, explained his view to CONNECTAS:

In the end, Ukraine is nothing more than an excuse. What is really at stake here is the international order being challenged by new emerging powers, in this case, Russia. In a way, we are beginning to see how Russia will act on the world stage in the future. Putin believes that the United States still regards Latin America as its backyard and based on this, claims that Russia has the same right to influence Ukraine, Belarus and other nations in its surrounding area.

The Russian president will not accept being told what to do and how to act in what was part of the former Soviet Union. According to Rouvinsky, “That's when reciprocal action started to appear in Latin America, I would say in more of a symbolic nature, to demonstrate that Russia is able to generate influence in apparently foreign territory.”

It’s clear that, at least for now, Russia’s preferred destinations are Venezuela and Nicaragua. Both countries have dictatorial regimes that Putin makes the most of by supporting them in the challenges they both face in terms of democratic guarantees and human rights.

At a first glance, Cuba would also be on this list, but Professor Rouvinsky disagrees:

Today Cuba is separated from Russia by ideology. Cuba is socialist, Russia is capitalist. Cuba may agree with the anti-American discourse led by Maduro and Ortega, but that is not enough to make it an ally. There is no longer that degree of trust from the time of the Soviet Union.

The Russian influence seems to have extended further than just the dictatorships. It appears that Argentine President Alberto Fernández was added to the list in recent days, while in the Kremlin itself.  Fernández told a clearly pleased Putin, “I am determined that Argentina stops being so dependent on the IMF and the United States and opens itself up to other opportunities, and I believe that Russia has a very important position.”

Fernández continued, going further than anyone would have expected:

We have to see how Argentina can become a gateway to Russia in Latin America, so that Russia enters in a more decisive way.

Russia is also the country on everyone's lips in Colombia. Bilateral relations have been affected by recent statements by officials from both sides. According to Defence Minister Diego Molano, the complex security conditions on the border with Venezuela are due to the nearby presence of troops from the Bolivarian Republic that have “the support of Iran and Russia.”

The Russian embassy responded immediately: “We are perplexed by the continuous attempts to accuse the Russian Federation of alleged ‘interference in Colombia's internal affairs,’ without any basis.”  According to the diplomatic representative, Molano is basing his accusations on unsubstantiated “intelligence data.”

So it is clear then that Russia, in its defiance of the West, is making its presence felt in Latin America. Professor Michael Shifter of the Inter-American Dialogue told CONNECTAS that Russia “is demonstrating its strength by presenting itself in the region. (…) Putin is interested in promoting democracy as he sees it.” Moreover, he is not doing so at just any time says Shifter, but is “taking advantage of the fact that the United States is having serious internal problems, with a very polarised and very toxic political situation.”

Along with Russia comes a not unlikely ally — the People's Republic of China. According to Shifter, “The solidarity pact between the two countries allows them to act in Venezuela, where they are heavily involved in technological and infrastructural projects.” Professor Shifter continued to add that in the past, the People's Republic of China was more interested in only commercial opportunities, but it is increasingly daring to do more, “in view of the undeniable loss of influence of the United States in the region.”

This was made clear when President Fernández included Beijing in his tour, after which he tweeted, “I had a cordial, friendly and fruitful meeting with Xi Jinping, President of China. We agreed to incorporate Argentina into the Belt and Road Initiative.” He also described the results of the meeting as “excellent news (because) our country will obtain more than 23 billion dollars in Chinese investment for works and projects.”

Still, with or without China, Putin proves to be an aggressive chess player who does not mind moving his pieces wherever he pleases. As Shifter notes, an important element to consider is that no one can anticipate how much longer this man — who is defiant and authoritarian and appears to epitomise cunning — will remain at the helm of the mighty Russian ship.