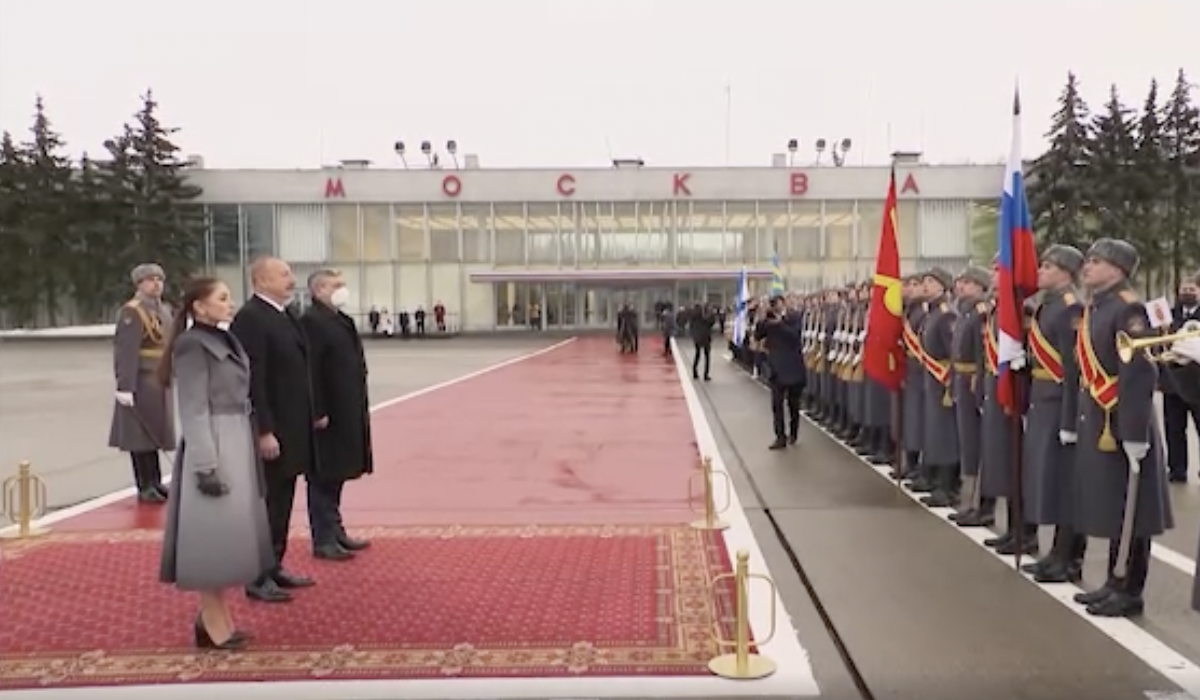 A screenshot from a video report by state news agency Azertag showing President Ilham Aliyev and the first lady, Mehriban Aliyeva arrive in Moscow on February 21, 2022.

After Vladimir Putin signed his now-infamous decree on February 21, recognizing the independence of the so-called Donetsk and Luhansk People's Republics in Ukraine, and ordering forces into the separatist regions to carry out what he described as “peacekeeping functions,” Western heads of states began weighing in with statements condemning the decision. One country that kept quiet was Azerbaijan.

That same day, Azerbaijani President Ilham Aliyev and the first lady Mehriban Aliyeva were on an official visit to Moscow where they were greeted by the guard of honor and Russia's Deputy Foreign Minister. At the time of writing this story, Azerbaijan’s ministry of foreign affairs had remained silent on the escalation.

As was much of Azerbaijan's pro-government media.

It's noteworthy that President Aliyev's visit to Russia was first announced by the Kremlin's press service. Even as no official statements were released on the escalation in tensions between Russia and Ukraine, and the media was quiet, social media users were discussing Aliyev's visit and criticizing the move, while others expressed their support for Ukraine, replacing their profile photos with Ukraine's national flag.

The following day, on February 22, instead of releasing any official statements, the President of Azerbaijan reportedly visited the tomb of the unknown soldier in Moscow ahead of the scheduled meeting with Putin.

The closest thing to a statement came late in the afternoon on February 22 from the ruling New Azerbaijan Party's Elman Nasirov of the Azerbaijan National Parliament who said there was nothing surprising in the decision announced last night by President Putin. “As noted in his address to the Russian people, in the current situation, they [Kremlin] were forced to take this step due to security issues,” the MP was quoted saying according to reporting by Azerbaijan Service for Radio Liberty.

Nasirov was referring to Putin's claim of protecting the security of the Donbas population. The Donbas region in eastern Ukraine has been a powder keg for tensions between Russia and Ukraine since 2014. According to the International Crisis Group, “the war pits Ukrainian government forces against Russia-backed separatists for control over much of the two heavily industrialized regions of Donetsk and Luhansk, also known as Donbas.”

Just one month ago, President Ilham Aliyev visited Ukraine on an official visit, during which the two leaders signed a joint declaration stating “the support for their countries’ territorial integrity and the desire to jointly counter hybrid threats,” reported Reuters. During a joint press conference following the signing of the declaration, Ukraine's president Volodymyr Zelenskiy said the declaration reaffirmed their “desire to ensure peace and stability in the Black Sea-Caspian region and beyond,” reported Reuters.

On February 22, President Aliyev discussed an “entire range of matters regarding the further development of bilateral political, trade, economic, cultural and humanitarian relations,” with Russia's President Putin, said the Kremlin's press office. “Also on the agenda is a review of the implementation of the November 9, 2020, January 11, 2021, and November 26, 2021, agreements on Nagorno-Karabakh between the leaders of Russia, Azerbaijan, and Armenia, including measures to resume economic and transport ties in the South Caucasus. Following the talks, the parties will sign a declaration on allied interaction that will elevate relations between Russia and Azerbaijan to an allied level,” read the rest of the press statement.

The contents of the agreement remained largely unknown to the general public until the two presidents finally signed the document that consisted of 43 articles.

Ahead of the meeting between the heads of the states, former Azerbaijani diplomat Nahid Jafarov, said Azerbaijan's inadequate foreign policy has resulted in an over-dependence on Russia in the nation on his personal Facebook page.

But opinions of the agreement changed little after the document was signed. Speaking with Azadliq Radio, the Azerbaijan Service for Radio Liberty, political analyst and journalist, Rauf Mirkadirov said, “Azerbaijan basically endorsed Russia's foreign policy by not only going to Moscow, but also by signing the document.” Mirkadirov also said that Aliyev's visit was planned by Moscow, to show the rest of the world there were still foreign leaders who supported Putin.

During a meeting between the two leaders, President Ilham Aliyev refrained from making any direct statements or comments on the recent escalation between Russia and Ukraine. And for a good reason, because as of February 22, and according to the signed agreement, the two sides will “refrain from any actions, including those carried out through third states, directed against each other.”