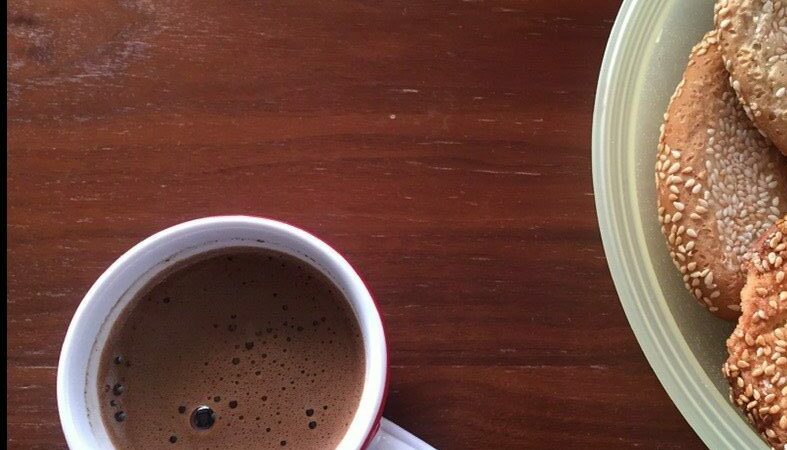 Al Hamra in Beirut has long been a mecca for coffee lovers of the city, as well as tourists. Today, the boulevard and its roasteries stand empty and abandoned. Image by Omar Boutine and used with his permission.

Hamra, a famous boulevard in Beirut, is a coffee lover’s haven — or perhaps it would be more apt to say that it was. Ranked by the World Bank among the top 10, if not three, most severe crises episodes globally since the mid-nineteenth century, Lebanon’s economic collapse, compounded by the tragic Beirut blast in 2020, has unraveled Hamra’s urban fabric and killed its cherished coffee culture.

The district’s once-bustling coffee shops sit eerily quiet, empty but for waiters shuffling aimlessly back and forth in the dark — for Hamra, like much of the rest of Beirut, suffers from regular power outages.

“The last time I went to a coffee shop was last week, but I didn’t get any coffee,” Christeen, a 20-year-old international business major at the Lebanese American University (LAU), says. “It’s too expensive. I only went there to meet up with friends and socialize.”

Fewer and fewer customers have been frequenting Hamra’s coffee bars, roasteries, and cafes, which is not surprising considering that the Lebanese economy has been in meltdown since 2019. The national currency, the pound, lost nearly 95 percent of its value by the beginning of 2022. In the aftermath of the crisis, prices multiplied, the value of salaries and wages crashed, large segments of the Lebanese population plunged into poverty, and businesses across the country struggled to stay afloat. The national minimum wage, which equaled LBP 675,000 or USD 450 at the 1,500 LBP-to-USD exchange rate, lost 84 percent of its value in 2021, plummeting in value to a mere USD 72 a month.

The resultant damage to Hamra's coffee culture is palpable. With coffee prices rapidly inflating amid a fluctuating exchange rate, many cash-strapped, coffee-loving Beirutis have been forced to do without. For many of the city’s beleaguered residents, a casual recreational outing to meet a friend, smoke a shisha, and enjoy a cup of coffee in one of Hamra’s many coffeehouses has long become a thing of the past.

“I’m not drinking as much coffee as I used to,” says Manar, a 21-year-old media and communications student at the American University of Beirut (AUB). “It’s become so expensive. Before the crisis I used to like to have several cups of coffee a day on Bliss Street but now I limit my consumption to one cup per day. It’s easier on my wallet, and I can brew my own coffee at home”.

Hamra street, in the heart of Beirut, and its coffee shops have survived the tiny country's turbulent history of civil wars, invasions, assassinations and violence. However, the ongoing economic crisis has proven to be a  powerful foe.

A single shot of espresso now averages LBP 20,000 at some venues, while, at others, a cup of Turkish coffee now costs LBP 25,000. Both a cappuccino and a flat white coffee cost LBP 40,000 in some places. For context, the daily minimum wage stands at LBP 30,000, in a country where fuel and medicine prices are constantly on the uptick, and the price of food is at an all-time high — up by 600 percent since 2019.

Coffee has become an unjustifiable expense that has to be weighed carefully against other more vital expenses.

The consequences on people’s coffee consumption habits have been severe.

Beirutis flabbergasted by the rapid rise in the prices of their daily coffees need not look too far to determine the cause. In a country that relies on imports to meet most of its consumer needs — from food to coffee to the razor blades used in barbershops — everything is impacted by the exchange rate of the Lebanese pound against the dollar.

“We don’t grow coffee locally in Lebanon,” says Ali Harb, of Good 2 Go, a café on Rue Makdisi off Hamra’s Main Street. “Café owners buy the coffee from a company called Barista, which imports its products from abroad. This sometimes makes it difficult for us to obtain certain types of coffee, such as decaf. The price of the coffee depends on the exchange rate at which it was bought. When my customers demand to know why the prices of their coffees did not decrease with the fluctuations in the exchange rate, I tell them that it’s because we’ve already bought the coffee at an inflated price, so we have no choice but to sell it at an inflated price.”

But, for many in Beirut, something bigger than affordable coffee prices is at stake.

“It’s not just a question of not being able to afford a cup of coffee,” Manar adds.

The district’s entire coffee culture is being affected. The crisis has impacted not only the frequency of coffee consumption in Hamra, but also our relationship to the cafes where we used to spend our time. It’s not about the coffee being consumed — it’s about the relationships that we built with the cafes and with the people with whom we’re sharing a cup of coffee. All that has been affected by the crisis. The cafes are empty. They’re not as busy as they used to be. Hamra’s coffee culture is dying. The crisis is killing it.