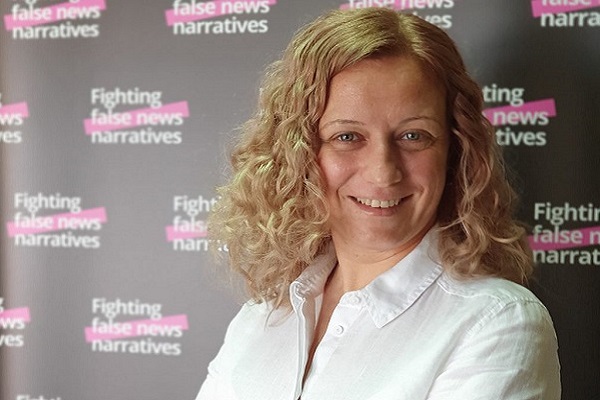 This interview conducted by  Ana Anastasovska was originally published by Truthmeter.mk. An edited version is republished here under a content-sharing agreement between Global Voices and Metamorphosis Foundation.

The NGO MOST, based in Skopje, North Macedonia, recently published the study “Disinformation and information distortion in North Macedonia,” which analyzed dominant narratives in 2020 in a sample of 2,658 articles from 211 portals and Facebook pages and groups. Fact-checking service Truthmeter.mk talked to Rosana Aleksoska, one of the authors of the study, about the main properties of ongoing disinformation campaigns that undermine democracy.

Truthmeter: What are the five general or 5D techniques of disinformation?

Rosana Aleksoska (RA): The Five Disinformation Techniques is a concept that originally included four elements: Dismiss, Distort, Distract, and Dismay. With the addition of the fifth element, Divide, the initial concept evolved into the 5D of misinformation.

Dismiss: if someone does not like criticism then, instead of facts and arguments, they attack with insults. Women in politics, marginalized groups or smaller ethnic communities are often the targets of such insults.

Distort: twisting the facts to produce a half-truth, which is more dangerous than a completely fabricated lie. One example is distortion in the reporting about the July 2021 Black Sea Incident involving British warship HMS Defender and Russian navy. Over 70 percent of articles about the event in North Macedonia contained only the Russian side of the story. Only 19 percent used information from British sources, often manipulated in favor of the Russian narrative.

Distract: defocusing the public attention from certain key events, or historical achievements, like the flood of disinformation about the harmfulness of the 5G network in North Macedonia around March 27, 2020, the day it became a member of NATO.

Dismay: when a country pursues a policy and chooses a course that is supported by the majority of citizens, as North Macedonia has chosen Euro-Atlantic integration, and then dismay happens by third countries that dislike the chosen path.

Divide: it uses every opportunity to divide citizens along political party, ethnic and religious lines, as well as between countries. 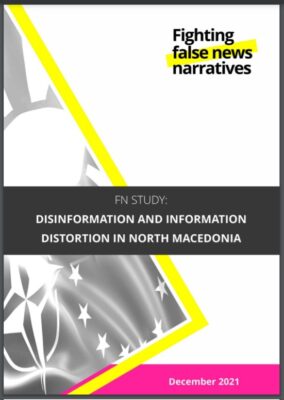 Front page of MOST study “Disinformation and Information Distortion in North Macedonia,” Dec 2021.

The use of these techniques is followed by the amplification of the disinformation via a number of known and anonymous pro-Russian and anti-Western portals, each tied to well-developed social media infrastructures.

The study, published by Fighting Fake News Narratives (F2N2) project in December 2021, analyzed the information on the assistance provided to deal with COVID-19 from various countries and international entities. It noted that articles related to aid from China and Russia were largely amplified through the social media networks, resulting in a much higher number of Facebook posts about the aid from these countries than other countries and entities, disproportionate to their real contribution.

Truthmeter: According to the 2021 Media Literacy Index,  assessing the potential for resistance to fake news in 25 European countries, North Macedonia is at the bottom — a position it has held since 2017. What are the main sources of disinformation in North Macedonia and why is our country at the bottom of the list?

RA: Our report lists the reasons why North Macedonia is at the bottom. One of them is [the low quality of] education and, consequently, the high level of distrust in science.

In addition to media literacy, it is worth mentioning the GLOBSEC research on the vulnerability of Central European and Western Balkan countries to the influences of Russia and China, in which Macedonian society is in the middle of the ladder with a vulnerability index of 40 out of 100. Factors contributing to this situation include the fragmentation of society, political polarization, as well as [exploiting] ethnic and religious differences…

In terms of sources of disinformation, our study identified several groups of pro-Russian and anti-Western portals with a well-developed Facebook disinformation infrastructure.

Truthmeter: Is there a foreign influence in North Macedonia and how is it reflected?

RA: Of course, there is. What we have noticed is that this influence extends to key periods and events for the country, especially when it comes to Euro–Atlantic integration. At every key event in this process, disinformation campaigns or information operations have been reported to distract attention from these historic achievements, attacking the West, and discrediting various figures, including Western institutions.

What is important to note is that this harmful foreign influence comes from authoritarian and liberal countries and it can be characterized as “sharp power.” This means that, while these authoritarian regimes suppress freedom of speech and violate human rights in their countries, they also abuse open democratic societies by promoting and imposing illiberalism and authoritarianism abroad. This “sharp” authoritarian influence in the young and vulnerable democracies of the Western Balkans penetrates or perforates their information space, trying to influence citizens through manipulation and distortion of information.

This process takes place through multiple agents of influence and information operations, both foreign and domestic, who are positioned at different levels and with different roles. The primary focus of disinformation narratives in North Macedonia, and in the Balkans, is to further polarize and divide.

Truthmeter: The study places particular emphasis on anti-EU and anti-NATO propaganda in North Macedonia. How did you notice it and how is it placed in the Macedonian media?

RA: As I said, one of the disinformation techniques is a distraction, which was especially noticeable in our country during key achievements or events related to Euro–Atlantic integration, so we witnessed two disinformation campaigns directed against the EU and NATO, respectively.

The first, ironically titled “Blanket for You,” was part of the anti-EU narrative “EU does not help North Macedonia/the Balkans” and aimed to downplay EU assistance to North Macedonia in dealing with COVID-19.

It followed the announcement from the then EU Ambassador, Samuel Žbogar, that North Macedonia would receive assistance through the EU Civil Protection Mechanism, which included, among other things, 1,000 blankets. An immediate anti-EU narrative “Blanket for You” emerged in the form of campaign with ironic twist of the slogan “EU for you.” This can be interpreted as an attempt to cover up the information that North Macedonia received 66 million Euros from the EU to deal with the new coronavirus, a fact willfully ignored by all actors involved in the campaign.

The second campaign was conducted around March 27, 2020, the day when North Macedonia joined NATO. It was aimed at distracting the public from this historic achievement, which is a strategic goal of the country since its independence and has consistently high support from citizens. Unfortunately, this well organized and coordinated campaign incited fear and panic by claiming that NATO is imposing the 5G network. Another Anti-NATO narrative further exploited the COVID-19 pandemic by attempting to discredit the Defender Europe 20 military exercise [as a superspreader event], through disinformation that alleged arrival of 70,000 US troops in Germany has caused panic across Europe.

These two examples show that the topics used for disinformation are most often emotional, something to which people react, such as their health, or the health of children, security, identity issues, interethnic relations, etc.

Truthmeter: Currently, the situation with Russia and Ukraine is top news. Is there a glorification of Russia in North Macedonia? What do the narratives in the public and media space reveal?

RA:  Most of the narratives directed against the West, the US, the EU or NATO, include direct or indirect promotion or glorification of Russia. A number of factors are (mis)used, such as the legacy of communism, Slavic origin and religion, and the openness of democratic societies.… These  disinformation and propaganda operations are often based on reinforcing existing misconceptions and biases.

Russian attempts to expand its “sphere of influence” to the region can't be reconciled with the fact that almost all Balkan countries have already become NATO members.

Russia applies similar strategies as against Ukraine. There, in addition to the hybrid war waged since the occupation of Crimea in 2014, the Kremlin promotes narratives that a sovereign state should not to run its foreign policy according to the interests of its citizens, but according to Russian interests. All this, from the suffering of Ukrainian citizens, with more than 14,000 lives lost, to violation of the territorial integrity and sovereignty of Ukraine, is contrary to the basic principles of international relations ensuring peace and security.

The glorification of Russia, among other things, is carried out through interconnected networks of foreign and domestic agents of influence, that often act very subtly.

One of the latest examples is [belittling] reactions to the 24 January statements by the Minister of Defense Slavjanka Petrovska that North Macedonia respects and supports the sovereignty and territorial integrity of Ukraine, and that, as part of NATO the Army is considering troop deployment scenarios.

What was surprising is that certain structures in society still behave as if North Macedonia is not a member of NATO, although it will be almost two years since its accession to NATO. NATO is above all an alliance, which means that we have entered into a defense-security alliance with the other 29 member states and of course, we should take part in any defense operation that NATO is undertaking or plans to undertake.