Domestic workers are struggling to find healthcare and accommodations 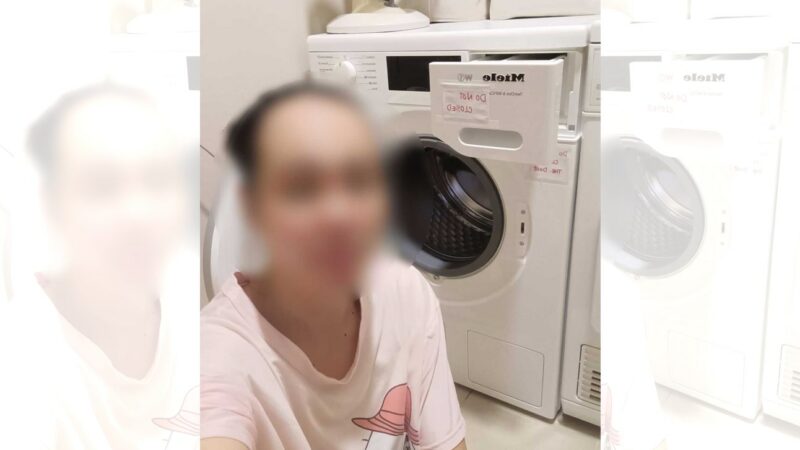 The following report was published in Hong Kong Free Press on February 17, 2022. It is republished on Global Voices via a content partnership agreement.

A 35-year-old Filipina foreign domestic worker who had her visa application denied was forced to live on the streets of Hong Kong for two nights after testing positive for COVID-19. The case has generated widespread sympathy and complaints about Hong Kong's insufficient resources for migrants. It comes as a migrant workers’ support group warns of an “emerging crisis.”

J, who wished to remain anonymous, told HKFP on Thursday that she had been living in a park in Hong Kong's Yau Ma Tei district since testing positive for COVID-19 on Tuesday. She was scheduled to fly back to the Philippines on Wednesday following a visa denial.

J was asymptomatic and was told by the hospital to quarantine at home as the hospital was at capacity. However, the 35-year-old did not have a place to return to as she had resigned from her previous employment over poor living conditions and was denied a visa to work for a new employer. Domestic workers must legally “live in” with their employers.

The migrant worker reached out to the Hong Kong Federation of Asian Domestic Workers Unions (FADWU) for help, and the group provided her with a tent, a sleeping bag, facemasks, some cleaning supplies, as well as some food.

Temperatures in Hong Kong are expected to drop to 10 degrees Celsius during the weekend.

In a press statement addressed to the Director of Immigration Au Ka-wang, FADWU said they tried calling the Centre for Health Protection (CHP), but the line was occupied.

The group said they also tried calling the Home Affairs Department’s “StayHomeSafe” hotline but was told that “the hotline only provides support to home quarantine people who have been issued with a home quarantine order by the Health Department.” 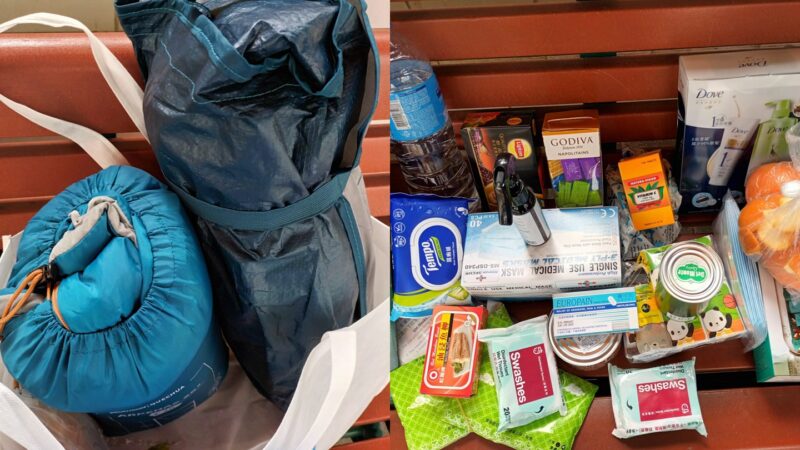 Supplies given to J by the FADWU. Photos via the Hong Kong Free Press. Used with permission.

FADWU said that J terminated her contract with her previous employer after the employer did not provide her with reasonable accommodation.

According to a video seen by HKFP, J had to sleep on the floor next to a shoe cabinet, washing machine, and dryer.

Another NGO, HELP for Domestic Workers, has since contacted J. The group’s Executive Director Manisha Wijesinghe told HKFP that there was an “emerging crisis” after the government increased testing and more domestic workers tested positive.

“So in the last two days, we have got quite a number of crisis phone calls from domestic workers who have tested positive for Covid, and [are] having difficulty finding places to stay,” said Wijesinghe.

The executive director said that the organization was also dealing with other five cases of foreign domestic workers struggling to find shelter. She said that three of the five cases were eventually sent to the government’s quarantine facility at Penny’s Bay, while the other two workers had to sleep overnight in hospital carparks.

Wijesinghe said that one of the two workers was on her way back to the Philippines when she tested positive during her pre-flight test, while the other was told by her employer not to return to the residence after she tested positive.

“We understand the increasing number of cases and issue, but I think with these domestic workers not having a place of residence to go back to, the fact that they’re sleeping out means it is a danger to the general public as well, because these are Covid-positive patients who may be engaging with the larger population, and increasing the possibility of infection,” the executive director said.

The group said they received help from government departments, but the authorities were “completely overwhelmed” and multiple calls were needed to order to get through.

Wijesinghe said that they were looking at a more sustainable solution in the long run. Apart from assisting with permanent accommodations, the group is also providing temporary measures including tents and sleeping bags, as Wijesinghe urged people to support their initiatives. 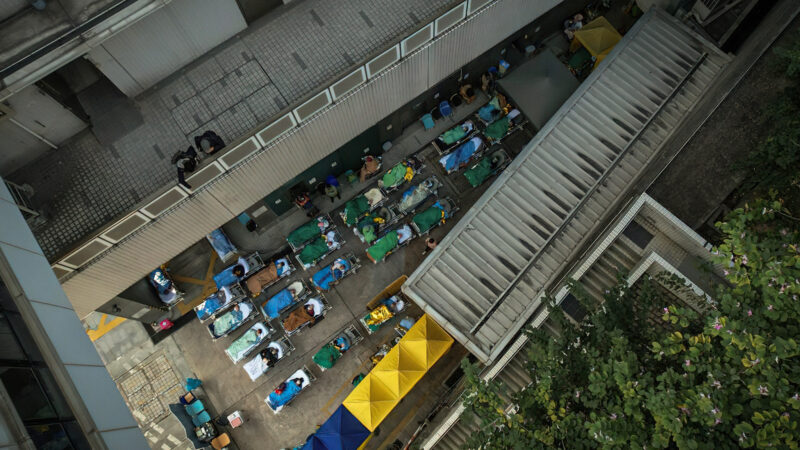 “I think the way the Omicron wave is going, this is just the tip of the iceberg and this will be an emerging problem over the next few weeks,” said the executive director.

HELP for Domestic Workers later told HKFP they would assist J with accommodation from Thursday night.

Eni Lestari, the chairperson of the International Migrants Alliance, said that her group also received calls from Indonesian migrant workers after they tested positive, and is currently facilitating at least two cases.

Lestari said that the group eventually contacted the Indonesian consulate after calling the department, and the consulate eventually put one of the workers in a designated quarantine hotel. 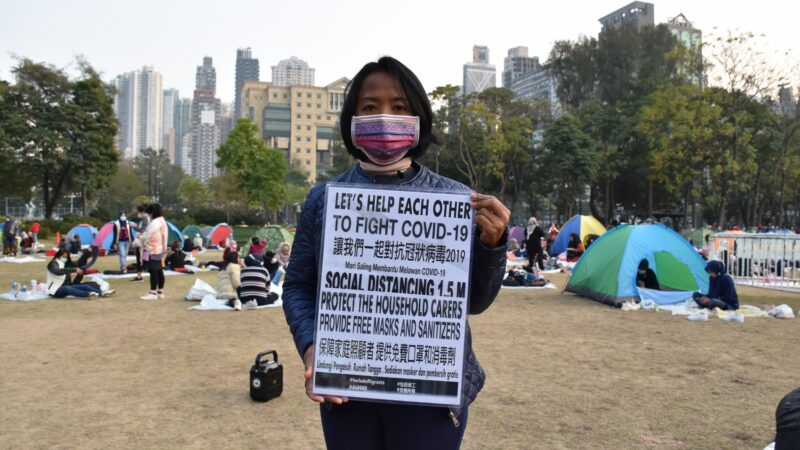 The migrant activist said that a lot of foreign domestic workers had to rely on their employers for information about the Covid-19 pandemic and the latest social distancing rules.

The chairperson also said that more domestic workers had been denied their day off since the Omicron outbreak, and even when migrant workers were given days off, often they were told to stay near the household.

Lestari also said that there was a double-standard when it came to employers of foreign domestic workers restricting social events: “What is the difference between you going out, going to the office, meeting your friends – some still go to yum cha, you still hang out with friends… [and] with us? So I think that’s one thing that Hong Kong employers must really consider…” said Lestari.

Hong Kong has recorded 37,071 infections and 242 deaths since the beginning of the pandemic over two years ago.

HKFP has reached out to the Department of Health for comment and received no response as of the publication of this article.