After a 12-hour blackout, Trinidadians wonder if their power supply is a shot in the dark

'Soooo ummm what happened? I feel like I deserve an explanation' 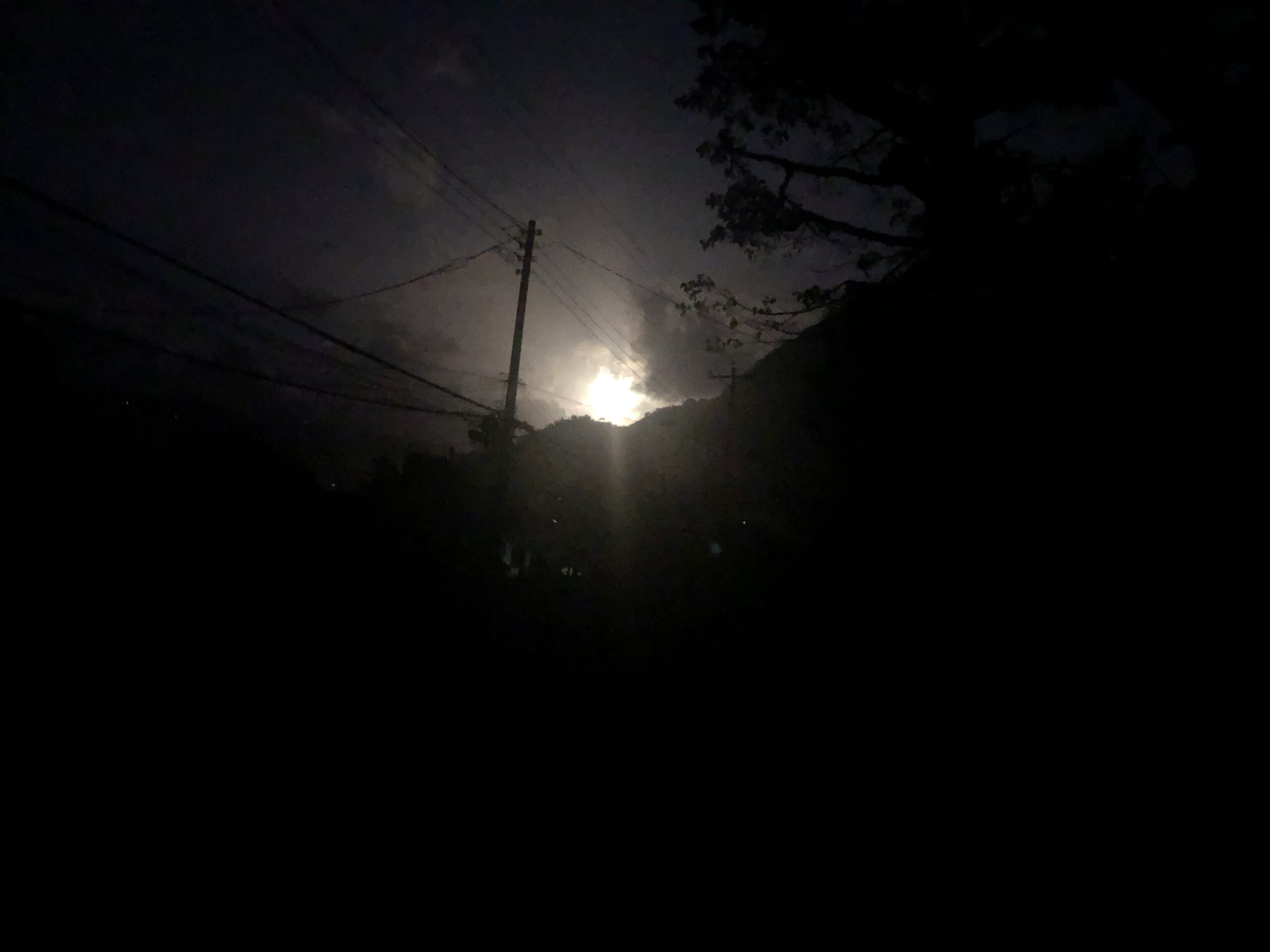 The moon rising over the silhouetted mountains of Trinidad's northern range on February 16, 2022, during an island-wide blackout. Photo by Janine Mendes-Franco, used with permission.

At about 12:30 p.m on February 16, there was an island-wide power outage in Trinidad, which lasted until approximately 12:30 a.m. the following morning, with some areas of the country getting their electricity supply back sooner; others later.

The Trinidad and Tobago Electricity Commission (T&TEC) stated that “a fault” had developed in its system, causing two major lines 220 KV (220,000 Volt) lines to trip at stations in the south and central parts of the island:

This resulted in system instability and caused all the generating machines operated by IPPs to trip, leading to a loss of supply to all customers in Trinidad.

The sister isle of Tobago was not affected by the blackout. In its statement, T&TEC also placed some of the burden of “get[ting] power back onto the grid for distribution to […] customers” on Independent Power Producers (IPPs).

However, electricity wasn't the only thing that needed to be restored. The outage had a ripple effect, with citizens left without internet and access to data, with many not even being able to make phone calls. Just as distressing was the fact that water supply was also affected, leaving many citizens without two of the most essential utilities. The Water and Sewerage Authority (WASA) has since estimated that it could take them as long as three days to fully restore the water supply across the island.

In addition, there were traffic delays caused by the non-functioning of traffic signals at major intersections, and online school, which is still the channel by which most children are getting an education, was disrupted.

Some people took the outage in their stride, appreciating the slower pace by making time to admire the moon or watch the dance of fireflies.

Had a gander at the moon last night – in the midst of the island wide blackout pic.twitter.com/AzX6Etof8U

Others, like Amílcar Presi Sanatan, opted for a humorous approach:

Bout AD Wagon and 4 Wheel Van. Either yuh with a man with generator or a man with solar power #thatisall

For many, the lack of electricity would have been more bearable if the water supply hadn't also been affected:

Can't remember the last time I had to use a bucket of water to get things done….thanks for making sure I have those skills intact TTEC 😂 #noelectricity #blackout #trinidad

Other social media users, however, were upset at the situation. On Facebook, Nigel Thompson weighed in:

Lesson:
T&Tec is obsolete and has been for a while now. At least for residential homes.
Everyone should get solar generators for their houses. They are quite attainable now. Get a good electrician who will guide accordingly.
If you can’t get immediately, take your time save your cash, but get it as soon as you can.[…]

Nigel Wall also offered details about a solar-based alternative, though at least one commenter on the thread said the loss of electricity was not a big deal for her, she just wished she had been more prepared. In fact, on some WhatsApp chats and social media pages, netizens expressed frustration over both the frequency of outages and not being properly informed, though Maria Rivas-McMillan had a different perspective:

T&TEC’s Manager, Corporate Communications, did a good interview based on their 1 am release today @tv6tnt Apologized, stuck to known facts, and promised more when details come to hand. She closed by emphasizing that this was an “anomaly” since service is generally reliable 🙌

Soooo ummm what happened? I feel like I deserve an explanation #Blackout #Trinidad

Facebook user Lara Quentrall-Thomas questioned why there seemed to be “no back-up generators or business continuity plans for our national power supply”, and was curious as to whether customers would be able to claim damages for claim for “ruined frozen food, and sockets and appliances blown when power returned.”

Despite a T&TEC union official pleading with citizens not to blame the blackout on the company's employees, many people wanted answers.

When the press conference is held…and it must be held…spokespersons from TGU [Trinidad Generation Unlimited, which supplies about 50 percent of the country's electricity] are just as necessary on that panel as persons from T&TEC, TSTT [Telecommunications Services of Trinidad and Tobago] and WASA to breakdown for us in loving detail what happened from the TGU rumble to an entire island blacking out, taps going dry and telecomms failing.

We already know that what happened yesterday was unacceptable. The country now needs to know why it happened and what is being put in place to ensure it does not occur again.

T&TEC has confirmed it is investigating the incident.