Undertones: What Russian media says about the Russia-Ukraine crisis 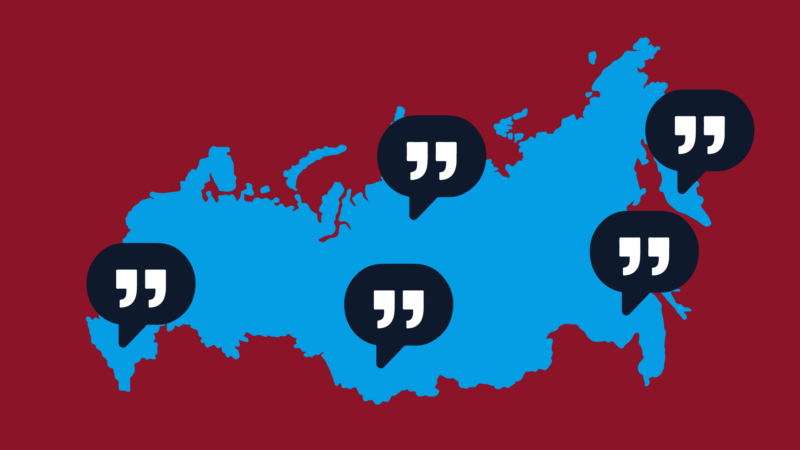 The news of thousands of Russian troops deployed along Ukraine’s borders has captivated world headlines for weeks, as Russia demands the withdrawal of NATO's troops from the states surrounding Ukraine. Tensions are increasing as European states consider the prospect of a possible war that could cause as many as 50,000 civilian deaths in Ukraine and turn many more into refugees, according to U.S. reports. In December 2021, nearly 40% of Russians believed that a war with Ukraine was “quite likely,” according to the independent polling agency Levada.

While western media has been raising the alarm over a possible Russian invasion of Ukraine since mid-January, Russian state media portrays the events quite differently.

What is happening?
In light of the deployment of Russian troops near Ukrainian borders in December 2021-January 2022, there is growing concern that Russia will invade Ukraine. Tensions between the two countries have been simmering since 2014, when Russia annexed Crimea and supported the armed separatist takeover of parts of eastern Ukraine. According to Russian officials, Russia’s recent moves are in response to the alleged threat of Ukraine’s possible accession to the North Atlantic Treaty Organisation (NATO). In December, Russia issued a list of demands to NATO that included a ban on Ukraine's accession to the alliance. The demands were rejected by the United States, the European Union and NATO, which are considering imposing new sanctions on Russia.

1. “Putin's strongman behavior is a reaction to Russia's treatment by the West”

Pro-government media have suggested that President Vladimir Putin must use strongman tactics to prevent Russia from being bullied by the West. According to their claims, as NATO has been expanding eastward in contravention of international agreements, Russia needs to show strength so that it is taken seriously on the world stage.

Older people in Russia were more likely (61%) to believe that the U.S. and NATO members are to blame for the escalation of the crisis in eastern Ukraine than younger ones (24%), according to Levada’s December 2021 survey.

Media headline: “Who is really preparing for war in Ukraine: five sure signs”

On January 20, Komsomolskaya Pravda (KP), a leading pro-government tabloid, offered five reasons to believe Ukraine – and not Russia – is preparing for war. The article implies that it is the West and Ukraine that have initiated war talks. The author does not mention Russia’s recent army deployment, nor the annexation of Crimea in 2014 and the ongoing conflict in eastern Ukraine. More analysis here. 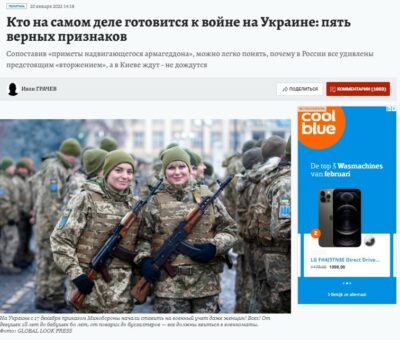 Russian officials and pro-government journalists have been using references to Russia’s history to threaten the West. On Telegram, Russian official Vyacheslav Nikonov – grandson of Stalin’s friend Vyacheslav Molotov – referred to Russia’s “glorious past” and threatened President Biden with a “cold shower,” i.e. nuclear power. The phrase “glorious past” may also evoke the Soviet Union’s decisive role in the victory of World War II. Subtle references to WWII have also been found in other media items and war rhetoric is ubiquitous in state-sponsored narratives.

As Russia’s social and economic fabric has deteriorated, however, and led to growing discontent and the shrinking of Putin’s popularity, fewer people support the kind of war rhetoric that played such a large role, for instance, during the annexation of Crimea in 2014.

In this Facebook video published on January 15, Vladimir Solovyov, news anchor at the government-owned VGTRK media conglomerate, warns the West not to “fight with the Russians,” because Russia will win. More analysis here.

3. “Putin does not know how to end the Russia-Ukraine tension without losing his reputation”

Some commentators have asserted that Putin and his associates in the Russian military have found themselves in a Catch-22 situation. Russian leaders do not want to start an actual war – the costs would be high and the resulting sanctions harmful – but they do not know how to de-escalate. Putin might also be afraid to lose his strongman reputation. For government critic Max Trudolubov, Putin “looks like a monkey that climbed a palm tree but does not know how to climb back down.”

Media headline: “Putin was dragged into the fog: visibility has vanished in relations with the West”

Daily newspaper Moskovsky Komsomolets (MK), which is close to the Kremlin's political elite, published an opinion piece by Mikhail Rostovsky arguing that the Russian people do not understand Putin’s military actions and that Russia's foreign policy is “at a dead end.” Without openly criticizing Putin, Rostovsky writes that a war between Russia and Ukraine will do damage not to the West, but to Russia – and that Putin is running out of options. More analysis here. 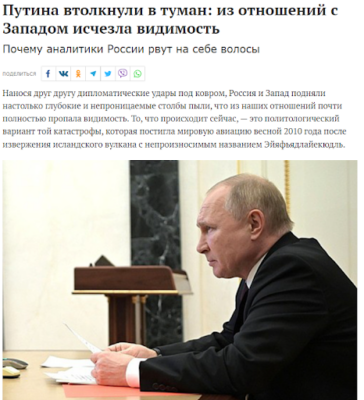 4. “The Russia-Ukraine crisis is a fiction created by the West”

More recently, pro-Putin commentators have claimed that Russia never had any intention of invading Ukraine and that the crisis has been invented and fueled by the West, specifically the United States.

Some Russian state officials insist that there will be no invasion of Ukraine unless the West provokes it – namely, if NATO does not heed Russia’s demands to stop its expansion. For them, the movement of Russian troops is an internal affair and the crisis is a result of hysteria fueled by Western media.

On January 31, Dmitry Peskov, Putin's press secretary, told Komsomolskaya Pravda that the US invented the Ukrainian crisis. Peskov stated that “the American media has been publishing a very large amount of unverified, distorted and deliberately false and provocative information about what is happening in Ukraine and around it in recent months.”  More analysis here. 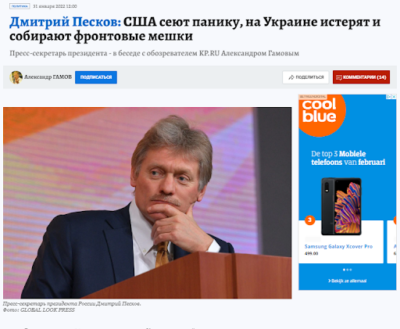 5. “Russia must not invade Ukraine”

Some Russian civil rights activists, members of the intelligentsia, politicians, retired military officers, and civilians believe that Russia should not take military action against Ukraine under any circumstances. But they are having a hard time finding spaces where they can voice their criticism.

The media landscape in Russia is very restricted; most large TV channels and editorial media either belong to the state or are controlled by state-affiliated entities. Most independent media are labeled “foreign agents” and are on the verge of being shut down by the state.

Many people do not dare openly express their views on social media for fear of reprisals. Hence, public statements and petitions remain an important tool of collective action for the Russian opposition, some of whom share memes.

Young users of Tiktok and Instagram appeal anonymously to Vladimir Putin to not start a war with Ukraine with a flashmob of sarcastic videos and comments saying “Daddy Vladdy please no war”. Hashtags include “#vladdydaddy” and “#plsnowar”. The users’ nationalities are unclear. More analysis here. 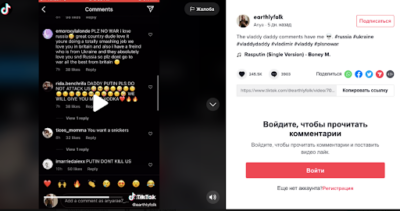