South Asia mourns the demise of the nightingale of India 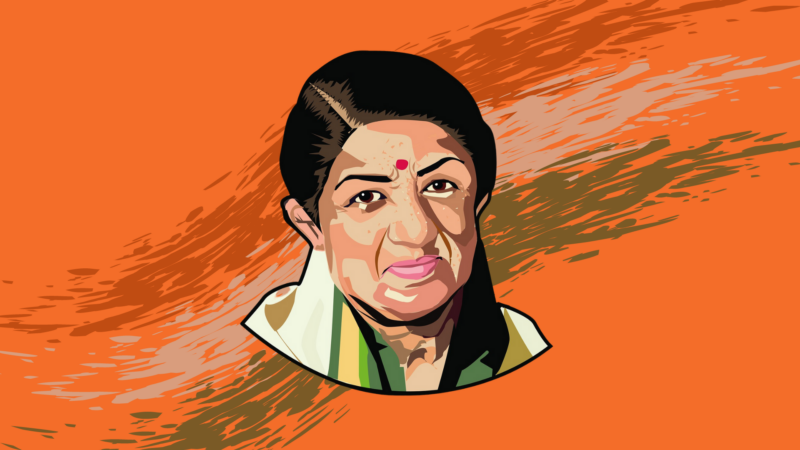 Illustration of Lata Mangeshkar by Laxman8 via Pixabay. Remixed by Giovana Fleck. Used under a Pixabay Licence.

Singer Lata Mangeshkar was one of India's biggest cultural icons, and her journey in Bollywood, cannot be pegged as anything but legendary. Her death on February 6, 2022, in Mumbai, India at 92 years of age, is leaving fans across South Asia mourning her absence.

Mangeshkar was fondly known as “the nightingale of India” because she lent the melodious lilt of her voice to innumerable songs for over seven decades, looming taller than any other female singer in Bollywood.

#LataMangeshkar may have been knows as the ‘#NightingaleofIndia‘ but the magic of her golden voice spread beyond the borders to Pakistan, Bangladesh, Sri Lanka and Nepal. #RIPLataMangeshkar #LataDidi 🙏 pic.twitter.com/jIIen31bKS

From the beautiful Madhubala in Mahal (1949) to the ravishing Madhuri Dixit in Dil to Pagal Hai (1997) and beyond, every prominent female lead of Bollywood has moved their lips to her iconic songs. Songs form an integral part of films in Bollywood. Actors lip-syncing to the voice of playback singers is a common practice in Bollywood musicals.

Mangeshkar was nothing if not versatile. Apart from Hindi and Marathi, she sang in 24 other languages, mostly for films. She had sung songs for several genres and different moods. Her music embodied the exuberance of youthful romance, deep sorrow, haunting nightscapes, spiritual bliss and patriotic fervour, all through her powerful, yet delicate voice. There’s seldom a dry eye when her poignant song, “Ae Mere watan ke logon, zara ankh mein bhar lo pain” (people of my nation, please shed some tears) echoes in a roomful of people. She worked alongside legends such as Kishore Kumar, RD Burman and Laxmikant Pyarelal, iconic pioneers who transformed the Indian music industry. 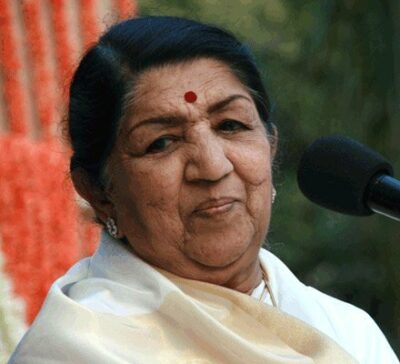 Lata Mangeshkar in 2008. Image via Wikipedia by Bollywood Hungama. CC BY 3.0.

Mangeshkar was born into a family of artists. Deenanath Mangeshkar, her father was a Marathi and Konkani musician. Her younger sister Asha Bhosle is a well known Indian singer as well. Unfortunately, Mangeshkar lost her father at the tender age of 13, leaving her to support the family. However, the vagaries of life did not prevent her from pursuing a career in music.

During her stellar seven decades of artistry, she won several awards including the Bharat Ratna, the highest civilian award in India. Bollywood, which still reverberates the many songs she sang, also bestowed a number of awards on her during award ceremonies, and she received much international acclaim. Lata Mangeshkar holds the Guinness Book of World Records for the most recorded artist with a whopping 30,000 songs to her credit.

Here are a few tributes that poured from her fans across South Asia to honour Lata through social media.

The Indian cricket team wore black armbands on February 6, 2022, during the ODI match against the West Indies.

Actor Randeep Hooda mentions on Twitter how she matters to India, since before its independence:

The relevance of the #LataMangeshkar to the history and self actualisation of India as a nation !! 🙏🏽 pic.twitter.com/VsRltFnsx6

Touching the lives of two billion people in the South Asian region is inconceivable. #LataMangeshkar did that through her songs in Hindi, Urdu, & Bengali. Celebrating Lata Mangeshkar's music is one of the very few things that the leaders of India, Pakistan, & Bangladesh agree on. pic.twitter.com/OnVDDIoONu

Journalist Murtaza Solangi from Islamabad mentions that she was also popular in neighbouring Pakistan:

On the sad demise of #LataMangeshkar the outpouring of messages coming out of every section of Pakistanis proves; music has no boundaries, reiterates the reality of common heritage and the fact that the people of Pakistan want to have peaceful and cordial relations with India.

Former Chief Minister of Punjab Shehbaz Sharif recalls how his generation grew up with her songs:

In the passing of Lata Mangeshkar, the world of music has lost a singing legend who mesmerized generations with her melodious voice. The people of my generation grew up listening to her beautiful songs that will remain part of our memory. May she rest in peace!

A legend is no more, #LataMangeshkar was a melodious queen who ruled the world of music for decades she was uncrowned queen of music her voice shall keep ruling the Hearts of people for all times to come #RIPLataMangeshker

Lata Mangeshkar also made a mark in the world of Bengali music as her songs captivated the people in Bangladesh over the decades.

Bangladeshis thankfully acknowledged how Mangeshkar took part in concerts to raise funds for the Bangladeshi refugees in Kolkata and Agartala during the Bangladesh Liberation War in 1971.

Musician Lata Mangeshkar organized a fund-raising concert in Mumbai in 1971 for the Bangladeshi refugees who fled during the Liberation war. She also organized processions and rallies in Bombay with artists, writers and intellectuals to raise funds for the refugees.

Many Nepalis, including Prime Minister Sher Bahadur Deuba, acknowledged that Mangeshkar sang a number of songs in the Nepali language. According to news reports, she didn’t want other singers to cover her songs in Nepali.

One of the Nepali songs by Bharat Ratna Lata Mangeshkar. ‘jun mato ma mero’ from Maitighar (1966). The lyrics were penned by the then King of Nepal, Mahendra Bir Bikram Shah Dev.#FilmTwitter #LataMangeshkar #Legend #BharatRatna https://t.co/LHxiDBceUy

Expression of grief at the passing of Lata Mangeshkar coming from current or former heads of state/government of Afghanistan, Bangladesh, Maldives, Nepal and Pakistan alongside India makes clear that all of Southasia has thus bid farewell to a little bit of its collective past. pic.twitter.com/85YAhgsA2m

As we bid farewell to Lata Mangeshkar, the legacy of her music shall forever live with us. As will her infectious smile, simple saree and the red bindi that adorned her forehead. May she rest in peace.