Hijab ban stirs protests in the Indian state of Karnataka 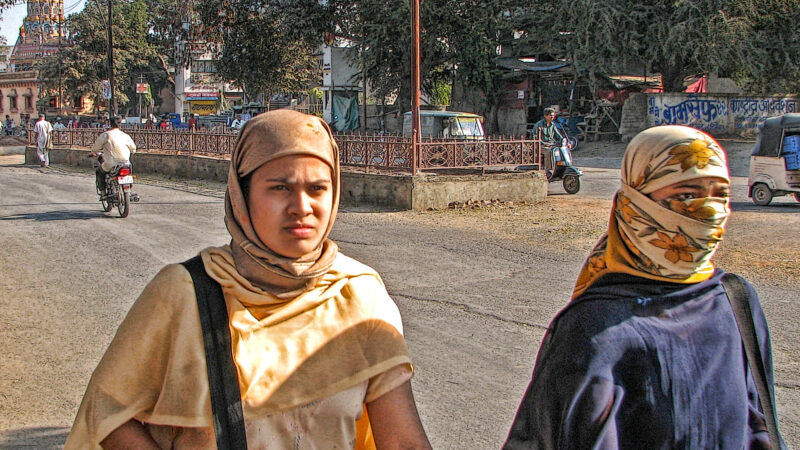 Women in hijab on the streets of Pune, India. Image via Flickr by Eric Parker. CC BY-NC 2.0.

Protests have broken out in the southern state of Karnataka in India over the past months, after colleges in the state banned female students wearing hijabs from attending classes. The ban was backed by the state government led by the right-wing Hindu nationalist Bharatiya Janata Party (BJP) which maintains that “clothes which disturb equality, integrity, and public law and order should not be worn.” According to Human Rights Watch, the ban is the latest example of marginalizing the Muslim minority in India, “exposing them to heightened violence.”

What is happening in Karnataka?

The problem started in December 2021 when a college in Udupi, in Karnataka, stopped some women students from attending classes in their hijabs.

The issue only came to light when the students started protesting on December 31, claiming that the college authorities had not allowed them to attend classes for the past two weeks. The BJP MLA from Udupi, Raghupathi Bhat who also heads the development committee of the college, claimed that students need to follow the college's dress code. The students filed a petition with the Karnataka High Court and also approached the National Human Rights Commission.

Journalist Karthik KK shared a video of a Muslim girl standing up to one such group. The video went viral. The girl in the video, Muskan, was hailed for her courage and came to be considered the face of the protests.

Similar protests by Hindu groups took place in several colleges in Udupi where they demanded a ban on hijabs, as seen in the video shared on Twitter by a writer with the username Bala:

Following this incident, other colleges in the region also started barring students in hijabs from attending classes.

Contradicting claims made by BJP ministers that students had started wearing hijabs only recently, in an interview given to The Wire, students said that they had been coming to college in a hijab for a long time, and it had not been labeled as violating dress codes until recently. They claimed that there were no provisions in the college rule book that banned the hijab, and past students had faced no issues regarding it either.

Why is this incident significant?

Attacks on Muslim women have increased in India in recent times. It is important to note that the hijab ban issue has come to light less than a month after the Bulli Bai app case made national headlines. Denying women access to education because they dress according to their religious beliefs is a violation of their fundamental rights guaranteed by the Constitution of India.

On February 7, one of the colleges allowed some Hijab wearing girls to enter the premises, but they were seated together in a different classroom and not permitted to take lessons. This has been seen as an act of segregation and apartheid based on religious identities. BJP leader Prathap Simha declared that, if girls want to wear hijabs, they can go to madrasas, which appears to be an effort to ghettoize Muslim women.

The issue was politicized

Several opposition parties including the INC, Communist Part of India (Marxist) (CPI(M)), and the Dravida Munnetra Kazhagam (DMK) also staged a walkout in the Rajya Sabha, the upper house of the parliament, after raising the subject of the hijab ban.

Right-wing groups on the internet seized the opportunity to further politicize the issue and hurl personal attacks against the protesting students, which included posting their phone numbers online, and sharing fake images and misinformation to paint the hijab ban protest as a politically motivated act.

Beware of RW propaganda. The girl in the pic isn't Muskan. pic.twitter.com/4chUZGCep0

There has also been a larger effort to discredit the movement and the cause by linking it to terror groups and political outfits.

On one hand, people sided with the saffron-scarves protests of right-wing Hindu groups against hijabs, upholding it as a sign of courage and Hindutva pride. On the other hand, some media houses and individuals posted in support of the pro-Hijab protests, emphasizing the students’ right to dress according to their beliefs.

Hijab ban: for secularism or Hindutva?

One of the major arguments used to justify ban on hijabs is the need for educational institutions in India to be secular. Supporters of this perspective have used the example of France to substantiate their argument. But there is a marked difference between the secularism practiced in France and the secularism practiced in India. As opposed to the classical idea of secularism which calls for a complete separation of religion from all state institutions, the Indian interpretation of secularism is based on equal respect and consideration for all religions. Institutions like schools and college are thus not free from religious influence. With 78 percent of Indians being Hindu, it is the religion most present in civic spaces. As a result we see state educational institutions celebrate Hindu festivals like Saraswati puja, and Navaratri, and school curriculums find an overwhelming presence of Hindu religious texts whereas texts from other religious groups are absent.

However, these and similar practices have been going on for decades; so why is the hijab seen as an attack on the secularism of colleges?

Religious intolerance is not new to Karnataka. The BJP-ruled state has in recent times witnessed a rise in attacks on religious minorities and overall growing Hindutva fervor, fueled by communal speeches given by BJP leaders. Many churches were attacked by Hindutva activists in Karnataka in November and December of 2021. The state government passed the Anti-Conversion Bill during the same period. There has been an overall push to Hindufy all public spaces and institutions.

As evidenced by this remark made by Vijayapura BJP MLA Basanagouda Patil Yatnal, “This is India and our country is founded on the Indian culture. We have already given them Pakistan on the basis of religion for them to wear Hijab,” the Hijab controversy is not about secularism, but about Hindutva.

The matter is in court

The Karnataka High Court ordered higher education institutions to remain closed till February 16 in view of ongoing protests. In an interim order, the court sided with the college authorities and dictated that students should refrain from wearing any religious clothes like saffron shawls or hijabs in college till the final verdict is declared. The court then referred the case to a larger bench. An appeal has been filed with the Supreme Court to challenge the interim order.

Meanwhile, last week, one of the colleges in Udupi leaked the personal information of the women students who have been protesting against the hijab ban. The leaked information included phone numbers and address. The students, who have since then been receiving threatening phone calls, fear for their safety.