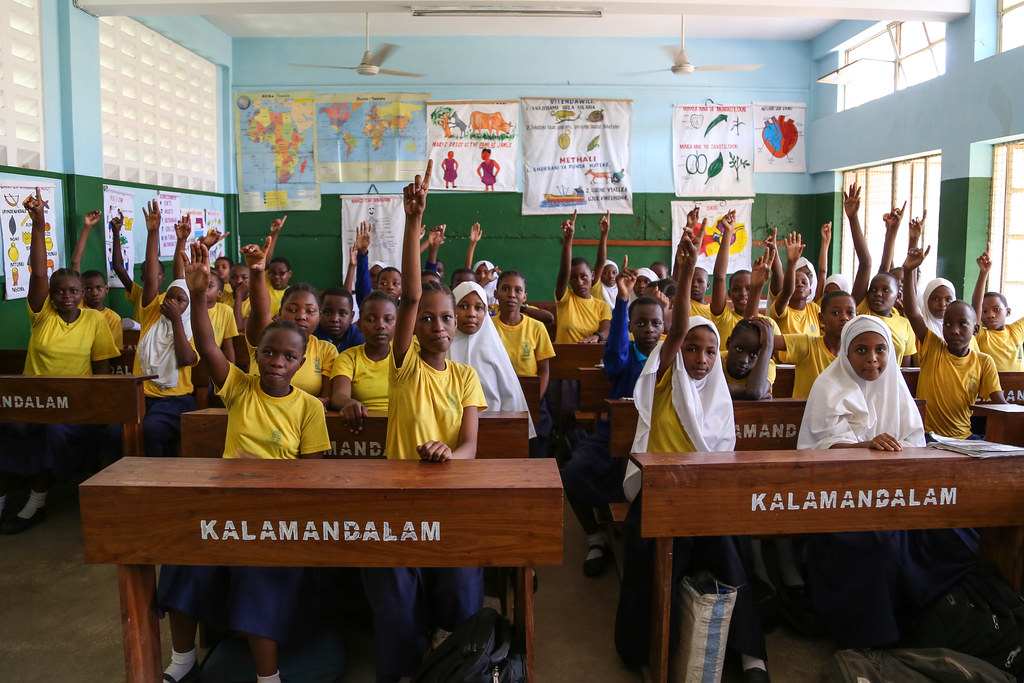 ‘Students in Primary Seven at Zanaki Primary School in Tanzania’ by World Bank Photo Collection is licensed under CC BY-NC-ND 2.0

There are approximately 150 languages in Tanzania. However, because the country's language policies prioritize Swahili, community languages have suffered — particularly in the area of primary education. The findings of an ongoing study by a team of researchers and linguists show this phenomenon isn't unique to Tanzania, but is occurring across the African continent.

In this article, we share some of our views with Global Voices about how the country's language policies affect Swahili and other community languages. We also looked at multilingualism in Tanzania and the way in which the language policy deals with the multilingual reality of the country.

According to findings from our study, in some parts of Tanzania, children encounter Swahili for the first time when they begin primary school. There are a variety of different languages spoken in these regions, such as Sukuma, Ha and Iraqw. There are other areas in which Swahili is used to a limited extent, and there are areas where Swahili is not used at all, except for in specific contexts such as administrative matters, religious purposes or public meetings.

In fact, the Culture Policy is the only one that explicitly references community languages, saying:

Community languages will continue to be used as natural assets to grow Swahili.

For example, on October 30, 2003, the Majira newspaper quoted a representative of the Tanzania Broadcasting Commission who prohibited the use of community languages on the radio, claiming these languages could be dangerous.

We argue the language policy in Tanzania is discriminatory as it prioritises Swahili at the expense of the many other languages, and by doing so, negatively impacts communities in the country who don’t use Swahili as their main language.

Our research with community members shows that the use of Swahili in primary education in rural districts does not facilitate the learners’ comprehension in their studies. If you look at the results of the grade four and grade seven national exams, there are huge differences between regions. For example, in our research in Nzega, Tabora, where Sukuma and Nyamwezi are the main languages of the community, approximately half of the grade four students in one of the schools we visited in 2020 were forced to repeat a year. As a result of this, the grade four class had twice as many students in it as the other classes that year. 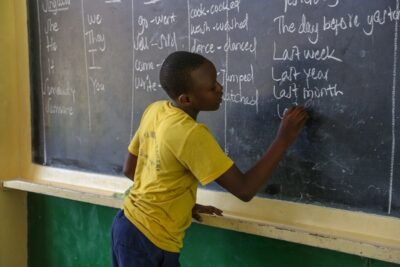 ‘A student in Primary Seven at Zanaki Primary School’ by World Bank Photo Collection is licensed under CC BY-NC-ND 2.0

Our research appears to shows that forcing learners to speak Swahili exacerbates educational issues and causes poor results in these national exams. For example, numerous reports from the NGO Uwezo Tanzania show that the comprehension level of students in grade three in terms of reading, arithmetic and writing is very low. They have also shown that even in grade seven, there are still a large proportion of students who have comprehension levels equal or lower to grade two students. This includes a large number of students from rural areas where they are not exposed to Swahili.

What does this mean?

We believe that this situation means lots of people are simply wasting time in school. It is continuing to undermine progress in these areas. There are students who study for seven years and who are still unable to answer relatively basic questions. People might think that these children are not very clever, but this is simply not the case. They have sufficient knowledge and are capable of success, but they have not yet been able to acquire a level of Swahili that would enable them to learn through Swahili medium instruction.

Another issue that needs to be examined closely in relation to this policy is that in addition to the students who do poorly in their studies and exams, some of these parents don’t believe that their community languages can help their children in their education. This was observed in earlier research carried out by Gastor Mapunda (2013) titled “Ngoni People's Attitudes towards the Use of Kingoni in Beginner Classes.”

Similarly, in our research in Songea District, when a parent was asked whether she would like her second-grade child to be taught in Ngoni, she responded:

No, I don’t want that at all. I myself speak Ngoni. How has it helped me? Up until today, I’m poor because of the Ngoni language.

Is it really true that the language has caused her to suffer like this? Or is it the lack of support for speakers of community languages?

In our view, not valuing community languages is a real problem and this is the situation that we find in Tanzania and many other countries. It is the right of every citizen to be respected and given the opportunity to shape their identity, including their right to choose which language they want to use in their daily lives. This must be supported through policy.

In addition to celebrating the announcement by UNESCO that will recognise Swahili as a global language via the announcement of a Swahili Day on July 7, it is important not to acknowledge that there are other languages that also need to be recognised. When children finish primary school without having their needs cared for, ultimately they will lose self-respect and feel devalued. In our view, this is not something that we can ignore.

This article was originally written in Swahili. Click here for the Swahili version.