Crimes and violence have marred COVID-19 lockdowns amidst peaking stress 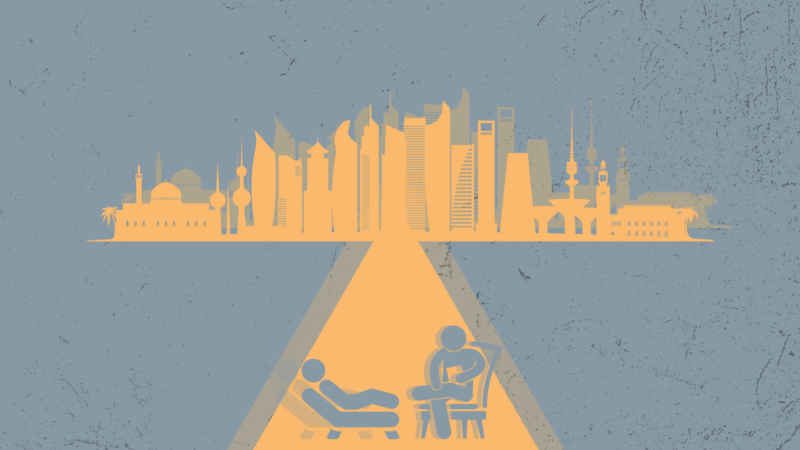 This article was first published on January 26, 2022 on Raseef22. An edited version is published under a republishing agreement.

To this day, and despite the piling stresses of the everyday life exacerbated by a pandemic that has affected billions around the world, visiting a psychiatrist remains widely unacceptable in the Arab world, especially among people of the Arabian Gulf, where rigid customs, traditions and beliefs continue to shape the choices of many.

Sarah, a Kuwaiti woman in her forties, has been suffering from panic attacks before the COVID-19 pandemic, which has placed emotional, psychological and mental strain on millions around the world. When she ran out of solutions, she resorted to visiting a psychiatrist, but was unable to continue her treatment as the prices of psychological counseling and treatment became unaffordable for her.

This in itself is a critical factor that causes those in need of a therapist to give up on the idea. But another factor also plays an equally important role: the societal shaming that accompanies such a step, which causes many to end up fighting their own battles without professional help.

As a result, acts of violence became part of the daily news, especially in the early days of the COVID-19 imposed lockdowns. These incidents of violence, including a wife who killed her husband by smashing his head with a hammer, and numerous instances among young people that led to death in many cases, continue to this day, albeit to a lesser extent.

Children and adolescents have also been greatly affected. At least one in seven children and young people across the world has lived under stay-at-home policies that were imposed or recommended by their government, which “put their mental health and well-being at risk,” according to a report by UNICEF. “Many children are left feeling afraid, lonely, anxious, and concerned for their future,” an effect that will last for years, according to UNICEF Executive Director Henrietta Fore.

The recent string of racist statements, incidents of violence, and killings are clear evidence of the serious social crises that are a byproduct of the pandemic.

During the pandemic, writer Amal al-Harthy experienced bouts of anxiety. She tells Raseef22 she felt like she had symptoms similar to those of the virus, so she sought treatment and ended up getting behavioral therapy without drugs. However, she recounts how the problem persisted until she took the vaccine and her mentality began to improve, “as if the effect of the vaccine was also psychological, instead of just physical.” She also spoke of the importance that a person be aware that psychological conditions are normal and that any person may go through them and be okay, as long as they are recognized and treated.

Meanwhile, Lama (pseudonym), a university doctor, says that she fell into depression in the midst of the pandemic. She tells Raseef22 that, at first, the lockdown was an opportunity to learn new skills such as cooking and enjoy her time with the family. However, she soon started to feel like she was being deprived of the things she loves, such as work and travel, which triggered dark thoughts that greatly and negatively affected her mental state.

So Lama turned to a life coach. “It greatly helped me in changing the way I think. I also invested my time in writing, which helped me overcome my depression that had lasted for an entire year.”

Saad Ibrahim, a Kuwaiti middle school teacher in his mid-thirties and father of three, went through a similar experience. His mental health began to deteriorate with the start of the quarantine period, and worsened with the death of his father. “Being a man, I had to bear the responsibility of the family without showing any weakness, which increased the pain I was experiencing. I stayed in this spiral for months, suffering from unprovoked fits of rage, until I found an online advertisement for an organization that offers psychological counseling at reasonable prices, and indeed this experience has changed me for the better. After committing to the sessions for a year, my mental state has greatly improved,” he says.

Basma al-Saad, a specialist in rapid transformational therapy, notes that “during the Coronavirus pandemic, there was an increase in mental health problems, most notably depression and obsessive-compulsive disorders, as unprecedented conditions led to high levels of fear and tension in Kuwaiti society and the world.”

As humans, we have emotional needs, including the need to communicate with others and having a sense of safety. In light of the lockdown and having to isolate and stay at home, people felt lonely and the feeling of fear from this pandemic increased as well.

She indicates that “children have also suffered during the COVID-19 pandemic due to the absence of their normal school routine and having to undergo remote learning, in addition to the isolation that led to anxiety and an addiction to video games. This leads to dangerous consequences for some that may reach self-harm.”

This increase in the demand for psychological treatment during the pandemic in Kuwait led to a surge in prices, especially since the price of the session is determined by the type of treatment and techniques used in psychotherapy, as al-Saad explained.

But at the same time, she considers psychotherapy “an investment in a person’s life.” In her opinion, “the most important of all is that a person is ready to begin change, and this requires courage and commitment, and the high prices increase commitment and responsibility for the individual.”

Al-Saad warns that neglecting treatment leads to the deterioration of both mental and physical health, “since suppressing thoughts and underlying psychological issues causes a person to resort to addiction to soothe, relieve, and numb emotional pain, through alcohol, drugs, overeating or even shopping, and here the problem becomes more complicated and controlling it becomes more difficult, because the body is harmed by these unhealthy behaviors, and the levels of stress and anxiety thrust upon the body and its immune system increase.”

Despite the awareness that many have of the importance of psychological treatment and therapy, the accompanying societal shaming still controls and dominates a large number of people.

But some people, including celebrities, are breaking their silence and sharing stories of the psychological disorders they’ve faced and suffered from. Sheikha Majda AlSabah, a pioneer in the cosmetic world, announced in 2018 that she suffered from severe depression, fought her battle bravely, and founded the ASAP initiative, a campaign promoting mental health awareness. Kuwaiti broadcaster Hashem Asad appeared in an interview with al-Qabas Online in December 2021 to talk about his story with mental illness. These have contributed, if only slightly, to spreading awareness and breaking the barriers standing in the way of psychological treatment and acknowledging any kind of mental disorder.

Saad Ibrahim advises anyone who feels ashamed to visit a doctor or psychiatrist to resort to online consultations because this lifts the societal shaming factor, “and makes you more comfortable to speak and vent to those who do not know you, which in turn makes you much more honest,” noting that when he relapses from time to time, he just books an appointment online.