Karate: A path to non-violence in Colombia

Karate is very popular in Cauca, a Colombian region plagued by armed conflict

The Shoowa Gymnasium, a martial arts school in Popayán, Colombia, celebrated its 35th anniversary on Feb. 4. It has transformed the bodies and minds of children, young people, and adults, both Colombians and foreigners, who have trained there. In southern Colombia, this department has been plagued for decades by the country's armed conflict. Yet here, communities are constantly sowing seeds of peace.

Cauca has historically been hit hard by Colombia's armed conflict. According to the Institute for Peace Studies (Indepaz), of the 13 massacres that occurred up to Jan. 29 of this year, three have taken place in this department. Five of the 14 social leaders assassinated in Colombia this year are from Cauca.

This is why it is so important that this department, where illegal armed actors have settled and are disputing the territory to establish illicit crops, such as coca, have the opportunity to focus their minds and bodies on a discipline that promotes respect, companionship, and non-violence. 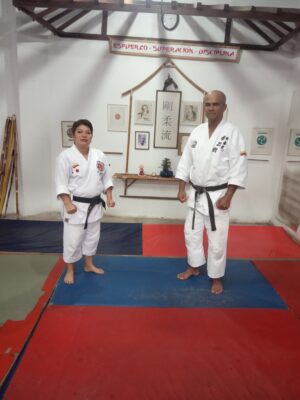 Juan Carlos Escobar and Yadira Rocío Flórez, teachers and instructors of the school. Photo by the author.

The Gōjū-ryū style is practiced there, which means strength and flexibility, a Karate style that promotes non-violence. Juan Carlos Escobar Quirá, a black belt and fifth dan, who directs this school, explained to Global Voices that, in a country that experiences as much violence as Colombia, he opted for the formative martial arts, with an emphasis on values.

UNESCO highlights Karate's transformative role, pointing to specific programs, such as a peacebuilding program in Brazil, a program to train female victims of sexual abuse in Peru, and a youth empowerment program in the Philippines.

Such has been the success of this discipline in the region that Cauca obtained more than 14 medals in the national championship — inter-league and inter-club — held in October 2021 in the department of San Andres Islands, in the Colombian Caribbean.

An alternative to violence

With that goal in mind, Escobar recalls with nostalgia his work as a Karate teacher between 1999 and 2004 in Belalcázar, one of the many municipalities in this department hit by violence.

Escobar traveled to the reservations, where the Indigenous peoples live, far from the urban center of the municipality. In these towns, Escobar says, there are not as many job opportunities as in the city.

“Many people found a path in Karate, they got away from violence, alcoholism, smoking, and the guerrillas. In addition, they left behind the illicit coca crops, which were replaced by coffee crops,” Escobar points out.

This Colombian school's commitment to values and peace can also be seen on other continents. In October last year, the Great Lakes Region in Congo in Africa held a martial arts championship, betting on lasting peace among young people who have been victims or perpetrators of armed conflicts.

The practice of Karate is for pacification, Escobar insists, which is why this training in childhood is so important. The sensei (instructor), Yadira Rocío Flórez, told Global Voices that they instill physical and emotional self-control so that minors will be good students, citizens, and family members.

One way to instill values such as respect is to do so is through training with people of different ages. 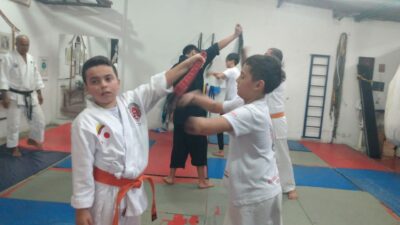 David in his karate practice. Photo by Yadira Rocío Flórez, used with permission.

David González, 10, a student at the Champagnant School in Popayán, has been practicing for nine months with his father. “What I like the most is that it serves to channel emotions. There are schools where they say that if someone provokes you, you have to throw a fist, not here; here they teach me that this is to defend myself, not to be on the offensive,” said González.

“In a country like ours where there are so many freedoms, but also drug addiction, martial arts focus children and young people towards a goal. It disciplines them. In such an aggressive and violent environment, it releases tension and reduces the speed at which the world turns. It frees you from all those burdens and you acquire the knowledge to defend yourself from other people who go out to attack,” he explains.

UNESCO declared Karate as the best training for children between the ages of 4 and 21, and Karate in Okinawa as an intangible heritage of humanity. It also recommends its practice at any age.

De-stressing and being calm are two great benefits for David. His father believes that this discipline is ageless and can be practiced as a family.

Julieta García, the mother of Juan José, has seen how her five-year-old son has become a little calmer, thinks before he acts, and enjoys the time he spends three times a week with other children.

Victor performs one of the warm-up exercises with his son David. Photo by Yadira Rocío Flórez, used with permission.

At Shoowa School, integration is fundamental, which is why different generations are trained and treated with the same respect. The youngest student is three and the oldest is 70.

Jonas Rûger, a German who lived and worked for several years in Colombia testifies to this. “I would go with my daughter. It was a very familiar space; we would train in an environment of mutual respect and care and where we would start with an oath, saying it is to defend ourselves if necessary. We learn about trust and mutual care; that's why I liked to take my daughters there because it was more than just punching a good fist.”