Does the state's failure to act enable online sexual violence in North Macedonia? 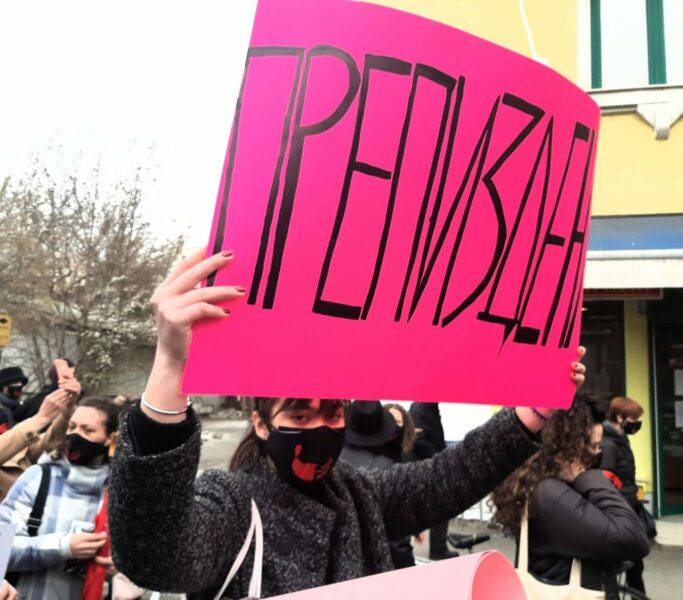 Protester with sign reading “Beyond Pissed Off” in Skopje, North Macedonia. Photo by Elena Gagovska, via Unbias the News. Used with permission.

This article was originally written by Elena Gagovska, edited by Tina Lee and published in Unbias The News. An edited version is republished in two parts by Global Voices as part of a content sharing agreement. Read part 1 of this report here.

After a private Telegram channel called Public Room was again found to be sharing non-consensual images of and private information about women and girls, there was a call for action from the state. By threatening to ban the app, the then-Prime-Minister seemed to indicate that Telegram bore responsibility for policing this

After street protests demanding the end of impunity for sexual violence took place in Skopje, the capital of North Macedonia, in February 2020, essentially no action was taken by the state. Several guerilla actions and two press conferences by the Platform for Gender Equality — a broad coalition of civil society and non-governmental organizations — took place after the protest resulting in a hostile official reaction from the Macedonian Police Union (a labor or trade union of police employees). Part of the statement read:

“As a trade union, we will not allow individual cases to be generalized and — through those generalizations — for police officers to be insulted and belittled as being unprofessional, unethical, or not sensitized to gender issues, or that police officers are guided by prejudice and stereotypes when performing their duties.”

However, it is more than clear that the Macedonian police not only has a history of not taking gender-based violence seriously, but also that they did not properly conduct an investigation when it came to the victims of Public Room.

“Had the police been serious about pursuing an investigation, there would be no need to get Telegram involved,” Irena Cvetkovic told Unbias the News.

“A real investigation would have involved either police officers infiltrating the group or the police actually listening to the victims, since they are the ones who know best to whom they sent their pictures. In other words, by taking witness testimony from the victims, the police could have found their first suspects.”

The trial of the two accused creators and administrators of the Telegram chat began on July 22, 2021. They have only been charged with production and distribution of child pornography, and have not yet been convicted.

A problem throughout the Balkans

Meanwhile, groups similar to Public Room appeared regionally with even less of a reaction from authorities. Radio Free Europe reported that in March 2021 it was discovered that private photos, videos and contact information of an unknown number of women were shared in a Telegram channel called “Ex YU balkanska soba” (Ex-Yugoslavia Balkan Room) to over 35,000 members. It was reported that the group was shut down and that the administrator of the group was arrested, but it is unclear if the victims have received any further justice.

Other than demanding a thorough investigation of the Public Room case, criminal prosecution of the perpetrators, and professional handling of cases for gender-based violence, the Platform for Gender Equality also demanded that a new law be added to the Criminal Code to specifically address sexual harassment online.

A day before the March 8 protest, then-Prime Minister Zaev wrote a Facebook post in support of the victims and announced that the government was starting a process to introduce two new laws relating to sexual harassment and stalking.

On July 27, 2021, then-Minister of Justice Bojan Marichic announced that a new criminal act called stalking, which will take into account sexual harassment online, has been added to the Criminal Code. While the criminal act still has to be voted on in the Parliament in order to officially enter the Criminal Code, it was largely seen as a positive first step, even though it came too late. He stated:

“A person who without authorization follows, persecutes or otherwise interferes in the personal life of another person, or establishes or tries to establish unwanted contact with them, by moving in the space where that person is, by abusing personal data, by using the media and other means of communication, or is otherwise psychologically abusing, harassing or intimidating them, will be punished with a fine or up to three years in prison.”

However, Nataša Boškova of Coalition Margins believes that Public Room could have been investigated by the responsible institutions even in the current legal framework.

“Amendments to the Criminal Code in accordance with the Istanbul Convention are currently in preparation. But, as a law practitioner, I think that not much can change in the protection of the victims of gender based violence solely by adopting the legal changes if work is not being done on changing the attitudes and transforming institutions in the direction of understanding the power relations and gender dynamics in our society,” she added. 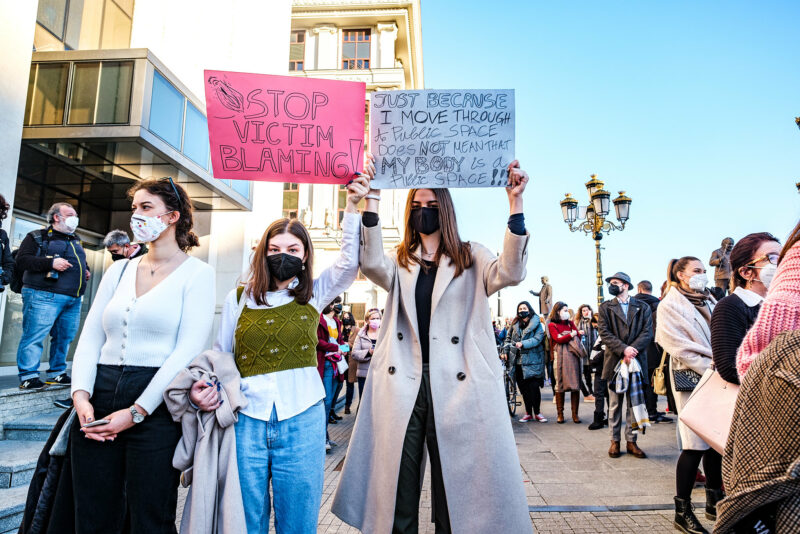 Towards prevention: The start of the sex ed pilot program

Another discourse that both feminists and other supporters have put forth is the need to not only punish the crimes that have already happened, but also work on prevention.

Many believe that the key to such prevention is to institute Comprehensive Sexual Education (CSE). HERA (Health Education and Research Association), a local non-governmental organization which is a part of the International Planned Parenthood Organization (IPPF), has been spearheading the campaign for sex ed in Macedonian public schools and together with the Ministry of Education has launched the first pilot sex ed program in the country.

Starting in September 2021 a new year-long sexual education pilot program has been implemented for ninth-grade students in four schools in Tetovo and Skopje (both in urban and rural environments) where CSE is currently taught as an elective subject.

“The fact that “Public Room” happened, as well as the spike in domestic violence since the pandemic began, is just proof that we desperately need to implement CSE in schools as a prevention method,” Katerina Ivanova, an experienced sex educator with HERA and law student who helped train the public school teachers who are teaching CSE in the pilot program, told Unbias the News. She added:

“In order to become an emancipated society in a sexual, gendered, and health aspect, we must have equal access to all this information. That is why I believe that the start of this institutional implementation is so important.”

However, the CSE pilot program has been met with a lot of opposition from emerging reactionary forces. A far-right organization called Od Nas Za Nas (which translates to “From Us For Us”), which has spread anti-vaccination and anti-Planned Parenthood conspiracy theories in the recent past, has been undermining the CSE program for months through the spreading of fake news and moralistic, transphobic fear-mongering around the fact that the CSE program will teach students about the concept of gender.

The organization’s president Gordana Godjo is also a notorious QAnon believer and anti-vaccination activist who encouraged demonstrators at an anti-COVID-19 measures protest on August 15, 2021 to cut up their masks.

Godjo has become the de-facto leader of the anti-sex education movement and on August 29, 2021, she publicly expressed gratitude to a middle school in Kučevište, a village near Skopje, that invited her to speak to parents about sex education, presumably spreading misinformation about the actual program to parents. “The parents were in disbelief,” wrote Godjo.

With the authorities still moving too slowly and ignoring cases of gender-based violence, and a reactionary anti-sex education movement becoming more organized, it is unclear if another Public Room can be prevented in North Macedonia in the near future.