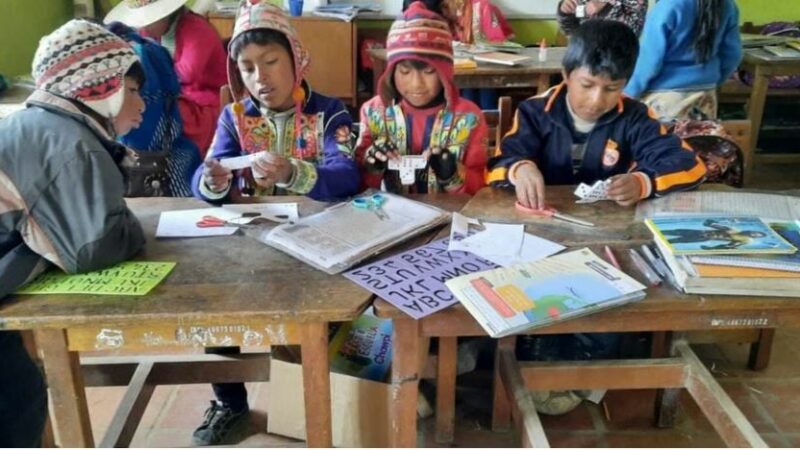 Boys and girls from rural areas of Bolivia who were part of the Radio Escuela. Photo: Courtesy of CEPRA.

This article was originally published in our partner Bolivian outlet Muy Waso and was edited and republished by Global Voices.

Since the start of the COVID-19 pandemic in Bolivia, the gap in access to education between schoolchildren in urban and rural areas has increased. An educational radio project has sought to fix it.

During 2021, educational activities in Bolivia were virtual and blended due to the pandemic, yet about 30 percent of students attend schools in rural areas with limited access to the internet and computers. The dropout rate in 2021 was around 20 percent in Bolivia, one of the highest in Latin America and the Caribbean.

According to data from the National Institute of Statistics from 2018, nine out of 10 households in rural Bolivia do not have internet access. In cities, the situation is not much better: only six out of 10 households have an internet connection. Four out of 10 Bolivian adolescents or young people indicated that they were not attending classes through any internet platform in a UNICEF opinion poll.

Boys and girls from rural areas of Bolivia who were part of the Radio Escuela. Photo: Courtesy of CEPRA

It was in this context that a radio school project from the non-profit radio organization Centro de Producción Radiofónica (CEPRA) emerged to provide educational materials to primary school children in 24 municipalities in the country in 2021. The project was managed by their own funds and donations.

CEPRA's radio school reached areas that received little to no resources from the State. It brought printed and radio materials such as booklets, radio stories, and radio dramas to support children's education.

“In 2021, this project aims to close the gap that left rural areas without any support or guidance at the end of the 2020 school year. (Following government regulations), radio and educational booklets are included, but with a lesson-based approach, giving only instructions to the students,” explains Juan Luis Gutiérrez, CEPRA coordinator.

CEPRA's radio school project also sought to recognize the different types of intelligence and ways of learning that children have “without qualifying or categorizing them.”

CEPRA reached children in four rural departments of the country: Potosí, Oruro, Cochabamba, and Chuquisaca. The booklets and radio materials include themes, characters, flora and fauna from each of these areas of Bolivia. The project addressed issues specific to each region.

The activities of the CEPRA project addressed community issues and the flora and fauna of the place. Photo: Courtesy of CEPRA.

The project not only focused on the distribution of materials but also included the training of teachers and community media broadcasters.

“Twenty-four community radio stations had an hour dedicated to children. It is something that had not happened until now,” emphasizes Gutiérrez, who is also a specialist in neuroeducation. It was not easy, some teachers said that trying to apply this project was “one more task for them to do,” but others cooperated with the project.

They had to evaluate the connectivity conditions and check if the students had internet and radio signals. This allowed them to carry out interventions in the households where they identified situations of violence.

“The 15 teams of educators who were going to implement the radio school sessions evaluated what was happening in the schools. During this process, we witnessed situations of violence from teachers, parents… so we set up spaces for psycho-pedagogical support and the pedagogues increased the number of visits to the households,” highlights Gutiérrez.

The initiative also sought to implement cultural, community, and environmental values, under the Montessori educational methodology. “Our educational approach includes more resources in the classroom and does not focus on the teacher. We want to support the student's perspective. We wanted to dignify the children, promote them as people with voice and decision power, and to create well-being with education,” says Gutiérrez enthusiastically.