Diaspora Diary: The account of a Nepali migrant worker in Qatar 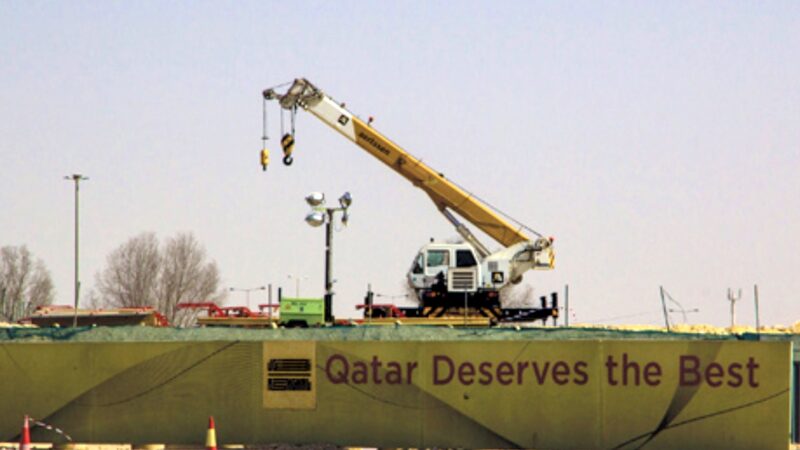 A construction site in Qatar. Photo via Nepali Times, used with permission.

This article was first translated from a conversation in Nepali and published in Nepali Times. An edited version is republished on Global Voices as part of a content-sharing agreement.

More than a million Nepalis work in the Middle Eastern countries and an estimated 12.5 percent of the Qatari population of 2.8 million are from Nepal.

In recent years, thousands of people were hired from Nepal to work on the construction of stadiums, hotels and other infrastructures being prepared for the 2022 FIFA World Cup to be held in Qatar, and there are reports of poor working conditions and a high number of unexplained deaths among migrant workers. Here is an account of a Nepali migrant worker in Qatar who returned home in 2021:

“I am sharing my story so others can learn about my experience. I prefer to remain anonymous.”

It has not even been three months since I said my goodbyes to my family, but I am already back in Nepal from Qatar.

I was promised a job in housekeeping in a five-star hotel but ended up at a construction site where they wanted me to carry around heavy stuff all day. I paid over Nepali Rupees 100,000 (USD 837) for this job, supported by loans and selling my sisters’ jewellery. But it was not what I signed up for.

Even then, I had no choice but to accept my fate. But after a month of physical labour, I fell ill and realised I was not cut out for this work. My company never once asked about my health while I was in the hospital, or recovering in my room.

I wanted to come home, but my employer was unwilling to let me go, and ultimately I had to escape without letting them know. Employers have been known to file cases falsely accusing people like me of stealing so workers cannot leave the country.

I only made it out because I had the support of some helpful Nepali brothers in Qatar. Not the embassy. Not the employer. Not the recruiter. Just some Nepalis with big hearts.

They were generous with their advice about what to do and provided me with a taxi fare. They pitched in for my ticket. They called me to remind me to keep my spirits high. Even now, in Kathmandu, my stay at this hotel has been financed by a fellow Nepali in Qatar.

In a foreign land, just being Nepali makes people bond together, and people go out of their way to help strangers — it is an inexplicable kind of brotherhood that I will never be able to forget, or repay.

Despite my bad luck, I have been lucky in many other ways. I am young, I sought help and help came spontaneously from many people. But I know it for a fact that there are many like me who have it even worse, are suffering silently, and struggling.

It is not bad for everyone. I know other Nepalis who have been in Qatar for years and are happy with their jobs. It is like a lottery, and I was dealt a bad hand this time. The company I was posted in happened to be the worst of the lot.

I have been lucky previously. I worked in Malaysia in a hotel for three years starting in 2011 and earned USD 480 a month (Nepali Rupees 57,356), which at the time was a huge amount for me. After returning, I worked in a hotel in Nepal. But I needed to earn more, and that would only happen if I found a job overseas again. I chose the Gulf this time but was unlucky.

As I sat in my room alone in Qatar when I was recovering and my roommates were at work, I used to reflect on many things, as I had so much time on my hands. You leave home for a few extra thousand rupees to a foreign land, but what all do you lose in the process? 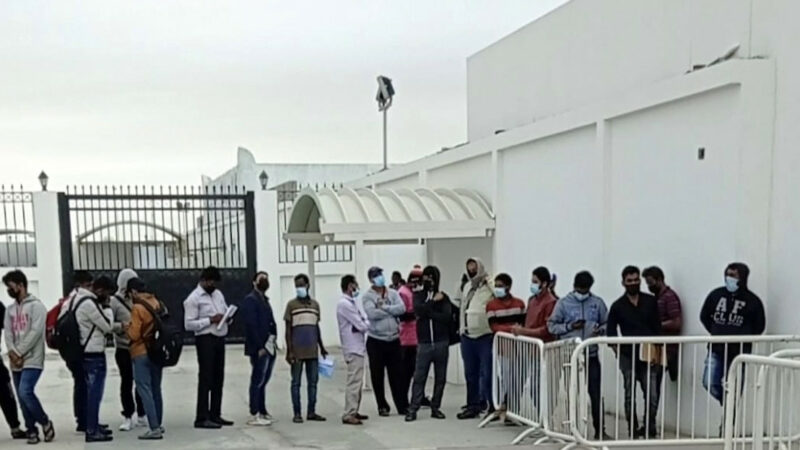 Nepali migrant workers at the Dept of Interior in Doha. Photo via Nepali Times, used with permission.

My work in Qatar required me to get up at 4:00 a.m. for the bus that came to pick us up. We packed food that we cooked the previous night, but sometimes it went bad because there was no fridge at the construction site. You also cannot eat when you feel hungry; you can only eat when you are told to eat.

I even had to ask my supervisor to go to the toilet at the construction site. Our work would end at around 6:00 p.m., but by the time we reached our camp, it would be 8 o'clock. We would then have to cook dinner and our meal for the next day. By the time we were done and ready to wind down, it would be past midnight only to wake up at four the next day.

It went on and on like this. We were moved three times in the short period I was there. You don’t have a say in any of this, you just do as told, to do as they say.

I remember looking at fancy buildings in the past and wishing I could work on those. But it took me a terrible overseas experience in Qatar to realize that it is the people inside those buildings that matter. A Nepali in what they call a Wakala (small shop) was much happier than me.

When I was recovering alone in my room desperate to come home, I told myself I would never consider migrating overseas again. That I would do something in Nepal itself. I cannot explain the rush I felt when I finally held my boarding card in my hand at Doha airport. It was a well-planned escape that could have gone terribly wrong.

This is our reality

But reality hit soon after I came to Nepal. Where are the jobs? What will I do here? What will I earn? I have to feed my family and have loans to repay. You make a lot of sacrifices for a job abroad — even your dignity at times. But we also need those jobs.

I am sharing my story so others can learn about my experience. I prefer to remain anonymous. Besides my wife, no one in my family knows about what I faced abroad. I was in so much pain and stress, what is the point of getting my ailing mother all worried?

I am beginning a battle with my recruiter to get back my money, and he has shown some willingness to cooperate. I might eventually have to go back overseas one day, and sharing my story publicly may hurt my chances since I will be viewed as a “troublemaker.”

A fellow Nepali in Qatar who had not been paid for months was transferred and accused of being a “ring leader” among camp workers — just because he asked the manager for an overdue food allowance.

That is our reality. They want the quiet ones. The ones who can be silenced.