Everyone is talking about the Minsk Agreements, but what do they mean for Ukraine?

Russia and Ukraine have differing interpretations of the peace agreements 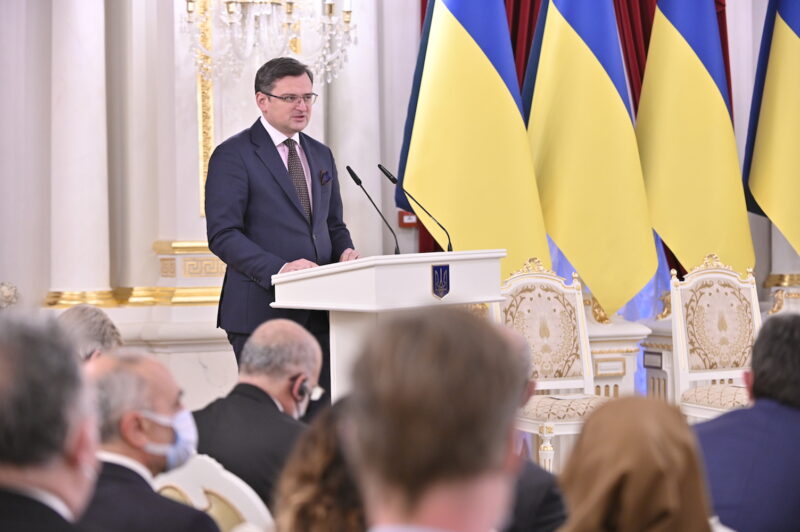 Ukraine's Minister of Foreign Affairs, Dmytro Kuleba, speaks at the Meeting of the President of Ukraine with heads of diplomatic missions of foreign states and international organizations, January 28, Kyiv, Ukraine. Image: Presidential Office of Ukraine, CC BY 4.0.

This article by Isobel Koshiw appeared on OpenDemocracy on February 4, 2022. It is republished as part of a content-sharing partnership and has been edited to fit the GV style.

The Minsk 2 peace agreements between Russia and Ukraine, intended to stop the fighting in the Donbas region of Ukraine, were signed in February 2015, when Ukraine was experiencing some of its heaviest losses against Russian-controlled forces. Hundreds of Ukrainian soldiers had been killed and many more were injured after being surrounded for a month in and around the Ukrainian town of Debaltseve. The losses came just after another crushing defeat for Ukraine at Donetsk Airport.

While the first section of the Minsk Agreements establishes a ceasefire, prisoner exchange and military withdrawal from the line of contact, the second deals with the Ukrainian government restoring control over its eastern border and holding local elections in the occupied territories, followed by the reintegration of Donbas into Ukraine via a special autonomy status.

Seven years on, the two sides want diametrically opposed outcomes and have two interpretations of the agreements. Yet talks, with the participation of France and Germany, continue.

The Minsk Agreements have only ever achieved a reduction in the intensity of the fighting, and even that is never permanent and changes constantly. And the political provisions designed to provide a real solution to the conflict lean in Russia’s favour.

Representatives of Ukraine, Russia, France and Germany — the so-called Normandy Format — are due to meet on February 10 in Berlin in an attempt to de-escalate Russia’s military presence around Ukraine. But the Format has so far failed to unlock the stalemate and this week, Russia moved forward with planned military exercises along Ukraine’s border with Belarus, worrying Kyiv and the West.

“The key political provisions are incompatible, in my opinion, with Ukraine’s existence as a sovereign country,” said Duncan Allan, a fellow at Chatham House who specialises in the Minsk Agreements.

In his analysis, the Minsk plan for the political reintegration of Donbas was put together hastily and contains contradictory points, which has led to the two sides arguing for interpretations that are advantageous to them.

Indeed, other analysts suggest that if Kyiv was pressured into implementing Russia’s version of Minsk, there could be a severe backlash from ordinary Ukrainians that could destabilise the country internally.

Allan believes that the agreements have a “very convoluted and confused sequencing procedure.”

Under the agreements, Ukraine wants Russia and its proxy forces to withdraw and allow Ukraine to take back control of the border before the proposed local elections under international standards take place. Then, instead of granting the territories the special status that Russia has argued for, Kyiv would give the territories some extra powers but essentially incorporate them into its existing decentralisation programme.

Ukraine’s interpretation of the agreement envisions alterations to some of the prickliest political elements, but in doing so, it negates what Russia has shown it wants from Minsk — the ability to continue to control the territories and through them have a say in Ukraine’s national affairs on an ongoing basis.

If Ukraine fulfilled Russia’s interpretation of the agreements, it would give the occupied region special status. In Russia’s eyes, this would include its own police force, described as a ‘people’s militia'; the right to choose judges and prosecutors; support from Kyiv of the region’s transnational cooperation with Russia; amnesty for anyone involved in the fighting on the Russian side; and elections. All of this would happen before the Russian-controlled and Russian forces withdrew.

The principle of elections and giving special status to a territory that has been through the horrors of war and occupation seems like a reasonable model.

But experts, like sociologist Oleksandr Shulga from the National Academy of Sciences of Ukraine, say that Ukrainians fear the reality would differ from the principle, and that Russia resists properly defining how the processes would work in practice.

Firstly, Shulga says, it is difficult to envision Russia or its forces in eastern Ukraine allowing the Organization for Security and Co-operation in Europe (OSCE) to organise free and fair Western-style elections in the Donetsk and Luhansk regions. Even if they did, according to Shulga, there is a strong possibility that candidates might be members of the former authorities, who have killed Ukrainian soldiers. Amnesties for these people would be extremely controversial.

According to Shulga, people living in separatist territories have been exposed to extreme anti-Ukrainian propaganda since the war began eight years ago, and this adds another level of difficulty to any election: “How can elections take place in these circumstances? Their whole frame of reference about the war is completely different.” The official line from the authorities in the occupied territories follows Russian state propaganda, which describes Ukraine as perpetrating a genocide against eastern Ukraine.

Russia’s idea of special status provision for Donbas would more likely than not see Russia use its proxies to have a say in Ukraine’s parliament for the indefinite future. And the ‘people’s militia’ which would theoretically be integrated with the Ukrainian police force, would very likely be de facto subordinated to Russia. However, probably hardest for the Ukrainian public to stomach, according to Shulga, would be seeing former warlords, many of whom are Russian citizens, sitting in Ukraine’s parliament or even as members of Ukraine’s police force.

Fears of an internal backlash

He believes that if Ukraine’s leadership did give in, viewing their predicament as a choice between Russia’s version of Minsk and more death and destruction, they could face a backlash internally.

In 2015, four national guardsmen were killed outside Ukraine’s parliament when members of a far-right nationalist political party threw a grenade to protest a law which would have introduced elements of the special status for the occupied regions. The first draft of the law was initially passed but it did not get any further and has since been rescinded.

Far-right expert Michael Colborne believes that if Kyiv’s government tried to implement Minsk, there would be backlash from large swathes of the Ukrainian population.

“With Minsk, it would not even be explicitly the far right. I think it’s mostly the nationalist civil society [in Ukraine] that would be the driving force, though the far right would certainly try to frame themselves as the vanguard of such efforts,” he said.

Colborne defines nationalist civil society as those, including many veterans, who hold non-ethnically exclusive nationalist views, which they see as compatible with liberal democratic government. Colborne sees some parallels with the anti-imperialist elements of Irish nationalism.

“It’s what I call the general patriotic turn in Ukrainian society after 2014, which, again, is understandable. It’s something that’s going to happen in a country at war,” he said.

Meanwhile, there have been no signs that Russia will embrace Ukraine’s interpretation of Minsk, even amid its worries about its future relationship with the West, but some argue that perhaps Ukraine should refocus on Minsk to create ‘breathing room’ amid the alarming buildup along the borders.

Volodymyr Artiukh, an anthropologist at the University of Oxford, believes that if Ukraine were to make overtures to Russia’s version of Minsk, it could give Russia the face-saving opportunity it needs to back down and perhaps make it more willing to offer concessions.

“This could be one small hope for avoiding the immediate kind of danger — the immediate destruction of the [Ukrainian] state that exists right now,” Artiukh said. “It will probably elicit some sort of concessions from Russia. They would have to tone down their rhetoric.”

“It will not solve all the problems, but it could give some breathing room, a room for manoeuvre for probably further negotiations,” he added.

The recent build-up of Russian troops along Ukraine’s borders are a signal that Russia is willing to use further military force to achieve its desired outcome. This could be through pressuring the West to make Ukraine implement Russia’s version of the agreements, or other, yet-to-be determined, policies.

The West periodically reiterates its support for the Minsk agreements by issuing statements such as promising to “lift EU sanctions against Russia after the implementation of the Minsk Agreements,” but it does so without defining whose version of the agreements it supports.

In an article, Allan urged the West to decide: “Is Ukraine sovereign, as Ukrainians insist, or should its sovereignty be limited, as Russia demands?” But, Allan said, he worries that “there are some Western policymakers who don’t want to face up to the stark reality.”

If Russia’s problem with Ukraine was about a single policy issue, like the language laws, the decommunisation laws, the EU or even NATO membership, and it used only diplomatic methods, then perhaps a solution could have been reached through mediated talks.

But Russia started a war in 2014 because it wants to control Ukraine on a permanent and everyday basis. It continues to fuel the war because it is unable to accept that Ukraine does not want to be controlled by Russia.