Music fan signing book of condolences on Macedonia Square in Skopje, North Macedonia. The banner slogan in the background “Our street is sad [since you are no longer here]” is lyrics from the song “Moja je pjesma lagana” (My song is slow). Photo by Meta.mk, CC BY-NC 2.5.

Rock fans across the region of former Yugoslavia have been mourning the death of Macedonian-Croatian musician Aleksandar “Aki” Rahimovski (66), lead singer of the Croatian band Parni Valjak (“Steamroller”), who passed away on January 22. According to the Croatian media, the musician, who suffered a stroke four years ago, had been taken to hospital in Novo Mesto after experiencing a seizure, where he later died.

News of his passing, which was shared via Parni Valjak's social media accounts, incited a wave of reactions by fans hailing from the countries that succeeded former Yugoslavia, as well as from a wider circle of music lovers from the Balkans region.

Aki's funeral was scheduled to take place in Croatia's Zagreb cemetery, but to prevent overcrowding in keeping with COVID-19 provisions, the band asked fans who wished to pay their respects to do so at a designated spot in the city center. Hundreds of citizens left flowers or candles next to Aki's photo:

We are touched by your response and the numerous personal messages in memory of Aki left next to his photo at the Well of Life. We thank you all from the bottom of our hearts!

In the main square of Skopje, the capital of North Macedonia, Aki's friends from the local radio station Buba Mara organized a similar space, where citizens could pay homage by signing a book of condolences, leaving flowers, or lighting candles. 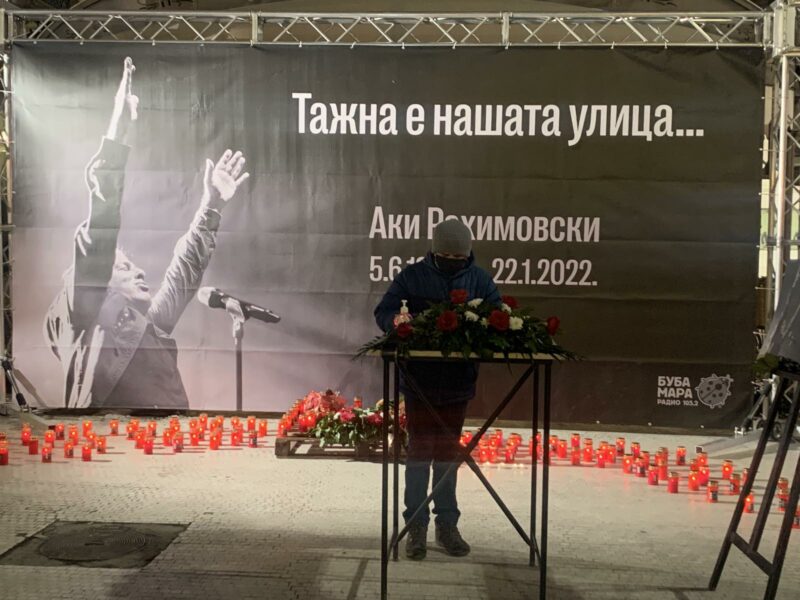 Music fan signing book of condolences at event honoring Aki Rahimovski. The slogan in the background “Our street is sad [since you are no longer here]” is lyrics from the song “Moja je pjesma lagana” (My song is slow). Photo by Meta.mk, CC BY-NC 2.5.

Even President Stevo Pendarovski paid his respects by participating in the event:

Aki Rahimovski left an indelible mark and lasting values that are an inspiration for current and future generations of musicians. His contribution, expressed through timeless songs, will be deeply engraved in the collective memory of the entire region. Rest in peace. Eternal glory to him.

On the evening of January 27, a day before the funeral, fans gathered in Skopje to sing Aki's songs. Similar events took place in other cities across former Yugoslav space, including Novo Mesto in Slovenia, where the musician had resided in recent years. 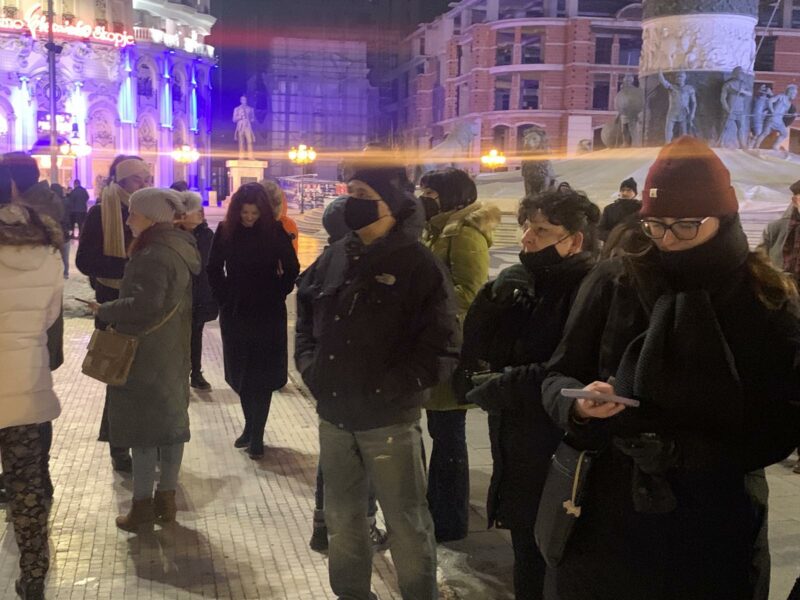 Aki Rahimovski was born on June 5, 1955 in Nish, Serbia. His father, a music teacher, moved the family to Skopje, North Macedonia, where Aki spent his formative years. A friend reminisced about when they used to sing in a high school choir:

Tweet: I remember as if it were today, when he came to choir practice and told us he's going to leave for Zagreb to sing there. He followed his dream and succeeded big time. Hats off, my friend.

Video: Parni Valjak song Jesen u meni (“Autumn inside me”) at a concert dedicated to the late Macedonian singer Toše Proeski (1981-2007)

As a teenager, Aki joined several bands, including Vakuum, Blood Brothers and Thor, moving to Zagreb, Croatia, at the age of 19 and participating in the Zagreb Festival in 1975. That same year, he met guitarist and composer Husein “Hus” Hasanefendić, and singer and guitarist Jurica Pađen, with whom he would form Parni Valjak, under the guidance of their music manager, Vladimir Mihajlek–Miha. Aki sang lead on 18 Parni Valjak albums.

Unlike many other 1970s and '80s rock bands creating music after the breakup of Yugoslavia, the multiethnic Parni Valjak didn't pander to patriotic or nationalistic sentiments, nor did they blend their work with turbo-folk. By remaining true to their original hard rock style and their main themes of love, lust and loneliness, they retained a loyal following across political divides.

The song Moje zastave (“My flags”) is a hymn lauding the individual dignity of those who follow their own path, and one of the few Parni Valjak songs that can be interpreted as indirect social commentary, decrying nationalist flag-waving and opportunistic changing of allegiances.

One song that exemplifies their eclectic style is Sve još miriše na nju (“Everything still smells of her”), which melodically tells the story of a man who confesses his obsession with another woman to his current lover, all while longing for youth. This 1993 video is one of the few performances from the first half of their five-decade career that is available online:

Over the course of the COVID-19 pandemic, Parni Valjak supported the work of medical professionals by staging online concerts and re-issuing some of their famous songs, like Ljubavna (“A love song”) under the motto #StayAtHome.

First you have to crawl if you want to walk
And when everything
Presses you to the wall, raise your head
Don't give up, just keep singing love songs
Shed a tear when no one looks your way

Although Parni Valjak's songs are in Croatian, Aki would sing in many other languages — including his native Macedonian — on solo projects. Offstage, he led a quiet and private life, with those who knew him describing him as a good neighbor and friend: “A great man! A simple, modest man who was always ready to help.”