In Azerbaijan, a man arrested for disrespecting a flag

Activist's arrest prompts discussion on the use of national symbols 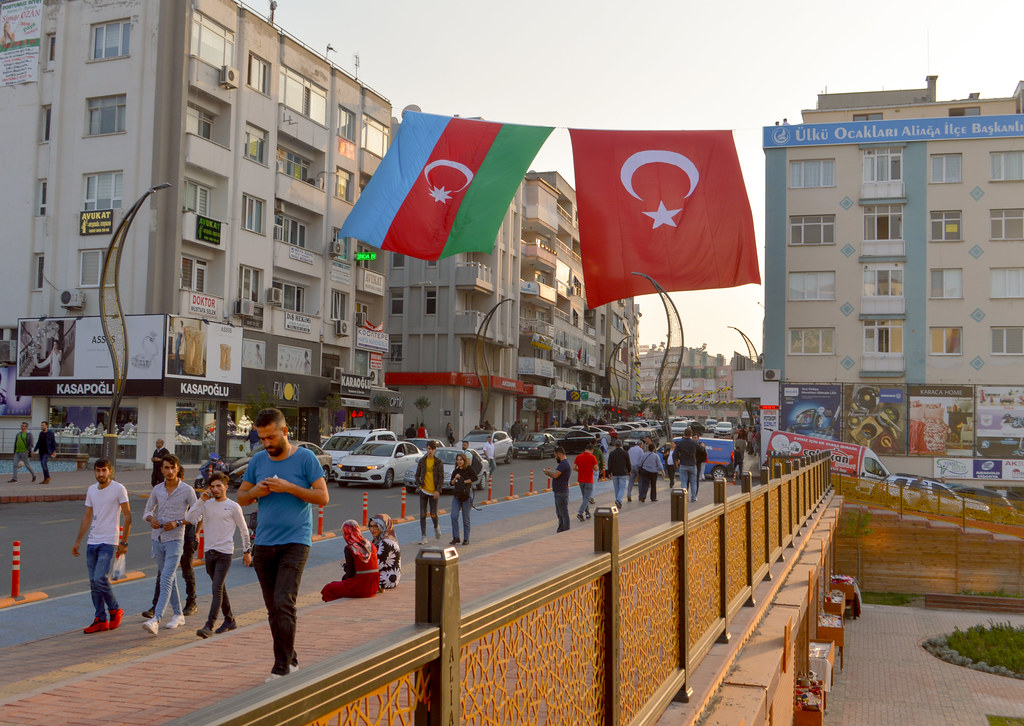 “Azeri and Turkish flags” by Francisco Anzola is licensed under CC BY 2.0

Political activist Fuad Ismayilov, 36, was sentenced to thirty days in administrative detention on February 1, 2022, after being arrested for lowering a Turkish flag that was hung outside a restaurant in Azerbaijan's capital Baku. According to an official statement by the Ministry of the Interior, he was arrested for “disrespecting the State Flag of the brotherly Republic of Turkey” and charged with disobeying police according to the Code of Administrative Offenses Article 535.1. The activist was caught on security cameras cutting the rope holding up the flag.

His arrest, prompted a discussion among Azerbaijani users on Facebook and Twitter on the use and perceptions of national symbols such as flags.

To arrest someone under the name of “insulting” the flag is, in my opinion, a robbery. Nothing is more valuable than human life. What you sanctify as a state is to serve the people. The main duty of the state is to protect the citizen, their freedom of expression. Who determines the state symbol? In general, why should a person respect the state symbol? What is this absurd idea? Why should citizens who do not support the idea of the flag and express this belief in practice be arrested?

According to national legislation, there is no reference to a criminal offense for disrespecting national symbols of foreign countries. “The Criminal Code of Azerbaijan contains rules regulating only conduct towards the state flag and state attributes of Azerbaijan,” said lawyer Fariz Namazli in an interview with OC Media.

Baku police arrested a man who pulled the rope of the Turkish flag & dropped it to ground.
But Azerbaijan Administrative Offences Code establishes responsibility only for the irregularities in raising and placing the foreign state& Intl Org flags but not the dropping them down.

Another independent lawyer, Subhan Hasanli, addressed in a Facebook post the division the case of the activist created in the society, with some calling for his immediate punishment, while others question the reasoning.

First of all, the flag in this country can be considered, a piece of cloth by some, and a sacred symbol by others. We must accept this. In a society, if we live together, we have to think of not only those who think alike, but those who think differently. It would be good if we consider, not to hurt those who think differently, not to disrespect symbols and values they consider sacred. Second, I cannot understand those who keep going on about the importance of the flag this time around. Weren't you applauding when LGBTQ+ symbols and flag were being burned? Or described those acts as freedom of expression? But now, when someone stood against your values you asking for a punishment? We must respect other's values, considered valuable, principled, or sacred. Even when those symbols can be shocking, and annoying.

But it is not only about tolerance and respect. “Symbols are powerful, and psychological research suggests that the increasing use of the national flag could actually have a damaging impact on social cohesion,” wrote Amit Katwala in this Wired piece. Quoting Markus Kemmelmeier, a social psychologist at the University of Nevada, Katwala notes, “Flags are tricky. If you allude to a collective and say, ‘This is us,’ there’s always somebody that’s not included.”

Kemmelmeier breaks down this argument in a research paper titled “Showing Patriotism, But Reaping Nationalism? Consequences of Exposure to the American Flag.” He and co-author David G. Winter write, “National symbols are central to any nation state. The provide an outward representation for a collective, its history, and its achievements.” The authors argue, “Salience of one's national identity engages the process of self-stereotyping,” which leads to individuals behaving in ways “they consider normative or desirable for their national identity. In sum, national symbols likely bring out in nationals that for which they believe their nation stands.”

In the case of the arrested activist, the flag in question was the Turkish flag. The two countries describe each other as having fraternal relations. The unequivocal support of Azerbaijan by Turkey during the Second Karabakh war culminated in further reinforcing these relations, as well as a trend of hanging Turkish flags in front of establishments across the country, including, cafes, restaurants, banks, and retail shops. Much of social media and traditional media criticized  Ismayilov for disrespecting the flag of the “brother country, Turkey.”

This is perhaps the first instance of strong public backlash against someone disrespecting a foreign flag in Azerbaijan. Journalist Shemshed Agha looked into previous instances where a foreign flag was disrespected and documented at least six examples in which the flags of Russia, Iran, Israel, US, Armenia, and Colombia were disrespected, but not in one case the perpetrators were arrested. “That is why, the Ministry of the Interior should refer not to its brother, but the existing laws and make decisions based on that,” wrote Agha.

Ironically, Ismayilov said after his arrest that he cut the rope not because he disrespects the Turkish flag but because he felt the flag was displayed at inappropriate places (cafes, restaurants), reported BBC Azerbaijan service.

In the meantime, Ismayilov's lawyer, Javad Javadov told BBC Azerbaijan service that they will be appealing the decision.

On a broader note, as Moises Naim points out in this opinion piece for the Washington Post, “flags and nationalism go together, and we are living in times of heightened nationalism. We surely need a deeper understanding of the dynamics of nationalism and the powerful appeal of political symbols.” One may only add the need for selective relationships some countries may have towards others, especially the ones perceived as “fraternal.”