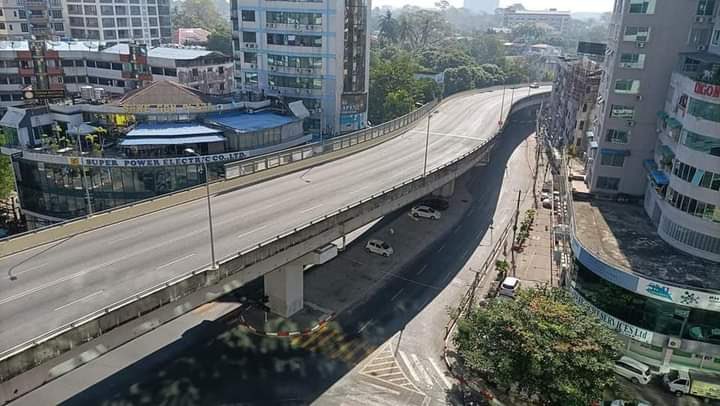 Despite threats of arrest from military authorities, Myanmar citizens largely remained indoors on February 1 as part of the ‘silent strike’ against the junta.

After grabbing power on February 1, 2021, by arresting officials of the ruling National League for Democracy, the military declared a state of emergency and established a new government, the State Administration Council (SAC), whose members were appointed by Tatmadaw (armed forces).

But the junta’s rule was immediately challenged by concerned citizens who launched a civil disobedience movement and called for the restoration of civilian rule. Over the past year, more than 1,500 have been killed and nearly 12,000 arrested for resisting the junta.

To evade arrest while demonstrating, pro-democracy forces organized a ‘silent strike’ on March 24 and December 10, 2021, by encouraging people to remain inside their homes. During the strike, cities became deserted for several hours, and the streets were emptied of people and cars.

The military government tried to dissuade people from joining this year’s ‘silent strike’ by arresting shop owners who announced that they will stop operating from 10 am to 4 pm on February 1. Despite their efforts, millions of people chose not to go outside during the day.

1/3 Members of the anti-junta General Strike Committee in Yangon staged a flash protest in the commercial city on Tuesday morning before the nationwide “Silent Strike” began at 10am. (Photos: CJ)#WhatsHappeningInMyanmar pic.twitter.com/k7IpD0ZS7I

This is Yangon today. A silent strike against the coup which took place a year ago is keep many off the roads #2022Feb1Coup pic.twitter.com/d4Klmp62Qu

Even residents in the capital Naypyidaw and other cities with heavy military presence were not seen outside their houses:

Roads and towns have been emptied even in the military stronghold – Pyin Oo Lwin and Lewe in Naypyidaw – which become known as military’s towns.

People across the country are observing the “Silent Strike” to remember the ruthless military coup which took place on 01 Feb 2021. pic.twitter.com/fJFliI1mTE

Some markets were forced to remain open out of fear of reprisal, but there were no customers:

Although open market vendors are coerced to open the market stalls, there is no buyers and even the sellers are not seen in the open shop stalls in Thiri Mingalar market in Yangon, 01 February 2022.
Photo – CJs pic.twitter.com/OG8cKFpGVt

The Civil Disobedience Movement said the ‘silent strike’ was successful

All the cities in the country – no matter big or small are observing #SilentStrike. Despite disproportionate intimidation and violence, SAC has failed. #WhatsHappeningInMyanmar pic.twitter.com/2Gx7Rspiik

Despite arbitrary abductions, threats and confiscation of properties, our people has shown once again to the world that they are still defiant and bowed to fight the military junta till the end!

An opposition leader shared a map showing the extent of the protest across the country:

Rohingya refugees in Bangladesh, who were displaced from Myanmar because of military operations, also joined the ‘silent strike’

The Human Rights Foundation of Monland interviewed a local resident about his participation in the strike:

I found that places which are usually bustling with people have fallen silent today. I saw some strangers join the pro-military rallies in the morning but now they are gone. There are very few cars on the roads. Most shops are closed, some on the main street are open…I feel like this is the safest way to express opposition to the illegal coup group.

After the strike ended at 4 pm, people began loudly clapping from their homes, as documented by Mizzima News

Pro-military rallies were held during the coup anniversary and they were permitted by authorities despite the existing regulation against mass gatherings.

The military government extended the state of emergency for another six months which reflects its failure to convince the majority of the population to accept its authority to rule the country. This editorial from The Irrawaddy echoes the sentiment of those who continue to reject the military government:

This is not just a pro-democracy movement: The people are determined that the era of recurring dictatorial regimes must end once and for all; they know that each day under a military junta is a day in hell.

The people have refused to allow themselves to once again become slaves of the military, and will never give up.