Musahars on the margins in Nepal

Nepali Dalits did not receive targeted benefits during the pandemic. 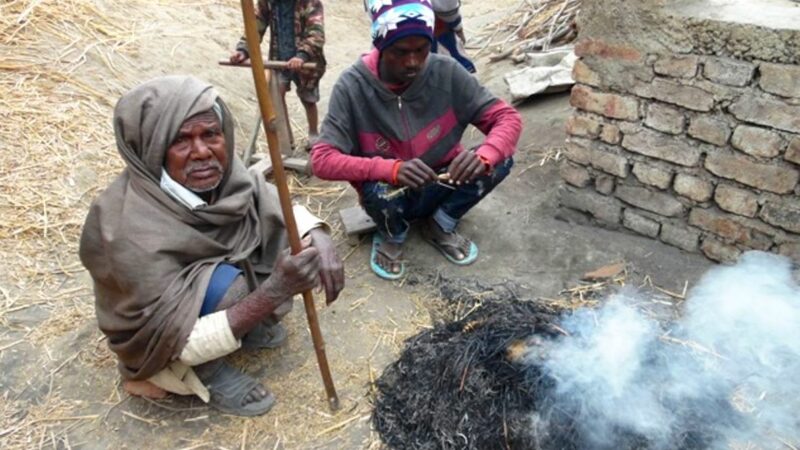 Musahars in Mahottari warm themselves by a fire. Image by the author. Used with permission.

This article by Rakesh Prasad Chaudhary was first published in The Record (Nepal); an edited version is republished below as part of a content-sharing agreement with Global Voices.

Fifty-two-year-old Chhathu Majhi of Bihar’s Bhitta village arrives in Khaira of Jaleshwor Municipality, Mahottari District in Nepal, at 6 a.m. Along with many other men and women from the Musahar community, Majhi travels to Mahendra Chowk in Jaleshwor, also known as Labour Chowk, where he looks for daily wage work. At the end of the day, Majhi and the others walk the two kilometres back home across the border. Musahars are a Dalit community found in the eastern Terai region of Nepal and they are facing hardship due to the ongoing COVID-19 pandemic.

On the Nepal–India border in Mahottari district, Khaira village lies on the Nepal side while Bhitta is on Indian territory. The Musahar community, which shares families and relatives, resides in both these villages. It is common for Indian Musahars to enter Nepal in search of work and for Nepalis to do the same in India due to the open border between the two countries.

The population of the Musahar community in Nepal and in the Indian state of Bihar is about 2.5 million. In Nepal’s Tarai, Chamars make up the largest Dalit population, followed by Musahars and then Dusadh/Paswans. Despite the size of their population, Musahars remain one of the most marginalized communities in both India and Nepal. According to a report by ILO, Dalits and Labor in Nepal: Discrimination and Forced Labor, among Tarai Dalits, Musahars rank third-to-last in the social hierarchy, followed by Halkhor and Dom. The highest in the Tarai Dalit caste hierarchy are Dusadh (Paswan), followed by Tatma, Khatwe, Dhobi, Chamar, Batara, and Parmadiya.

In the 2011 census, Musahars were the second to last in terms of literacy with a rate of just around 20 percent, after the Dom community. A vast majority of the community is landless and they are still victims of untouchability and ethnic discrimination, according to Sijendra Sada, a Musahar activist. Their name itself, Musahar or eater of rats, alludes to their position within society.

According to Pramod Sada, an activist from Nepal's Siraha district, Musahars continue to face discrimination in daily life, including untouchability as Dalits. Their plight is often ignored by so-called upper castes when seeking justice for ethnic and other forms of discrimination.

For instance, in the village of Madhwa in Mahottari districts, a consumer committee was to be formed to connect pipes for drinking water. Despite the drinking water affecting mostly Musahar community members, a Brahmin man was made chairman of the community. Even now, Musahars are not able to demand rights, says social activist Suresh Thakur. 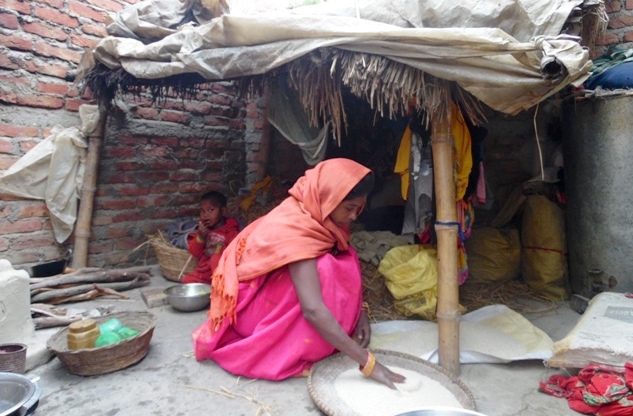 Many members of the Musahar community live in slums. Image by the author. Used with permission.

Across the border in India, things are marginally better for Musahars. Although they still face discrimination, they have been able to access assistance from the state government. In Nepal, Musahars face difficulty even obtaining citizenship cards.

Still, Musahars remain politically marginalized in both India and Nepal. In India, one in every four positions in village panchayats is reserved for Harijans, i.e., Dalits. Despite such an arrangement, it is difficult to find Musahar mukhiyas (head of community) or sarpanchs (decision makers). In the 2021 village panchayat elections, out of 8,072 mukhiya and sarpanchs, 91 and 1,342 posts were reserved for Dalits and Scheduled Castes. But the number of those who have won these positions from the Musahar caste is negligible.

In Nepal, the political situation of Musahars is no different. It is difficult to find any rural municipality chief or deputy chief from the Musahar community. In the local level elections held in 2017, only six Dalits were elected as mayors and 11 as deputy mayors, according to Samata Foundation, a non-profit advocating for the marginalized people. Despite Dalits making up more than 13 percent of the population, only 19 of the 275 members of the House of Representatives are Dalits. The proportion of Musahars among these is negligible.

The Mushar community primarily mainly works in agriculture. But a decline in agricultural work in Nepal and Bihar has led them to migrate elsewhere for work. Despite facing problems in education, health, employment, and access to justice, Nepali Musahars have begun migrating to Qatar, Malaysia, and Saudi Arabia for employment. But most Musahars are still employed in Haryana and Punjab in India, where they work as agricultural labourers. Musahar children also work in the labour markets of Delhi, Mumbai, Chennai, and Calcutta. Similarly, many Indian Musahars come to Nepal for work, finding jobs as daily wage labourers and in brick factories.

Unfortunately, the COVID-19 pandemic has pushed Musahars even further to the margins. Untouchability and caste discrimination continued against members of the Dalit community, especially Musahars, in government quarantine. In 2020, during the lockdown, Malar Sada of Saptari died of hunger. Even though food was distributed through the ward office, it did not reach many Musahars and, even when it did, it was finished within a week.

Dalit communities have been demanding cash assistance or concessional loans from the government but these voices have not been heard. Many Dalits died not only from starvation but also from a lack of cash for medical treatment. Raju Sada died in isolation after not receiving medication for diarrhea. 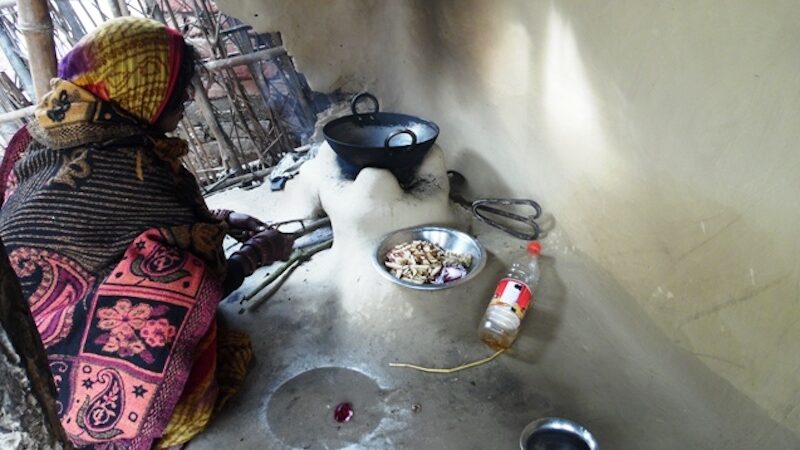 A Musahar woman from Anaitha village in Mahottari prepares food using firewood. Image by the author. Used with permission.

According to a report by Samata Foundation on COVID-19's impact on the Dalit community, out of 1,500 Dalit respondents from across the country, 82 percent reported financial difficulties and 45 percent lost their jobs. Fifty-two percent said that they faced a food crisis. Although disaggregated data is unavailable, it is likely that Musahars were affected disproportionately in these instances too.

During the pandemic in Bihar, food rations were provided to Scheduled Castes and the poor. During the lockdown period, the government deposited INR 1,000 (USD 13.35) in their bank accounts. Nepali Dalits did not receive any such targeted benefits, despite being much more at risk.