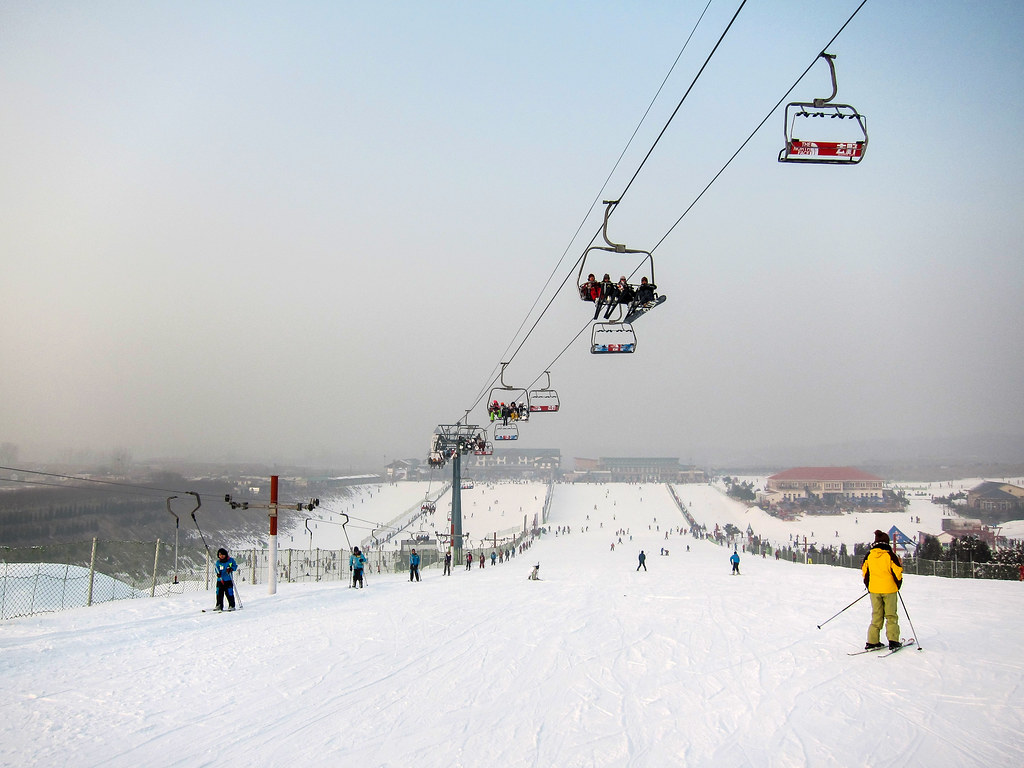 “初级雪道 / Entry-level ski trail” by livepine is licensed under (CC BY 2.0)

With the 2022 Winter Olympic Games in Beijing, China from February 4–20, Beijing will become the first city ever to host both the Winter and Summer Games. The Chinese city has been abuzz with activity, COVID-19 preparation, and controversy as the Games draw closer. However, with virtually no precipitation in the country's driest region in recent weeks, environmentalists have been raising concerns over the city’s snow — or lack thereof.

In the absence of any snowfall, Beijing organizers have resorted to creating fake snow for the alpine hills at the Yanqing Skiing Hub and have been blasting 290 cannons, also known as “snow guns” round the clock since December 2021, to prepare for the Games. In fact, for the first time, all of the snow at the upcoming Olympics will be entirely man-made.

To create the snow, the turbines mix water with compressed air, before propelling the droplets into the air to form snow. Workers driving “snowcats” spread the snow onto the ski runs and sculpt jumps and turns. This is to ensure that the venues have snow that meets precise standards of depth, hardness, and consistency.

“The biggest challenge for us is maintaining uniform snow quality,” said Li Xin, deputy chief of mountain operations at the National Alpine Skiing Centre in Yanqing, about 80 kilometers (50 miles) from Beijing, according to a France24 report.

Experts have raised concerns over the environmental sustainability of this process, as man-made snow requires thousands of liters of water and Kilowatts of energy. And in a 2020 study published by the Nature journal, scientists warned that groundwater depletion in northern China was some of the most severe globally due to urbanization, lack of precipitation, and intensive agriculture irrigation, calling it a “critical issue.”

According to the estimates, the Games will need almost 49 million gallons of water to create enough artificial snow for the winter events. In their Pre-Games Sustainability Report organizers estimated approximately 890,000 cubic metres of water would be used in Yanqing from November 2021 to March 2022 and 1.9 million cubic metres in Zhangjiakou, with actual figures to be published in the post-Games report.

Environmentalists have also raised concerns about the proximity to the 4,600-hectare Songshan National Nature Reserve. Many are also concerned that the noise pollution from the artificial snow machines will disturb wildlife at the reserve.

In Beijing, state-controlled media outlets have been touting the upcoming games as a feat of sustainability, even going so far as to call them the “green games.” In their Pre-Games Sustainability Report, the Beijing 2022 organizers highlighted steps made to reduce carbon emissions and use renewable energy.

In an article from the state-owned China Daily news site, critics argued that snow-making is not an irreversible process of consuming water, instead, snow-melt water can be recycled into reservoirs. As part of the Games, organizers have put up three reservoirs that will collect and recycle the snow-melt and rainwater to be used for making the artificial snow.

But experts have other ideas. Professor Carmen de Jong, a hydrologist with the University of Strasbourg, Paris, commented “these could be the most unsustainable Winter Olympics ever held…these mountains have virtually no natural snow.” Due to the high water and energy consumption, she said, the fake snow will damage soil health and cause erosion, not to mention the chemicals that are used to prevent the snow from melting. Other concerns arise on the time it takes for artificial snow to melt. According to a Spiegel story in 2008, it takes about two to three weeks longer to melt than natural snow and may affect the normal levels of underground water.

Organizers of the Games voiced a different opinion saying concerns over the artificial snow are “ill-informed and unfounded.”  Joe Fitzgerald is a Canadian slope-building expert hired as a consultant at the Genting Snow Park, Zhangjiakou, Hebei province which is co-hosting the Games. He told the state-owned China Daily that artificial snowmaking has been at eight other Winter Olympic Games and Beijing is no exception. He also noted that artificial snow helps to make a consistent surface, reducing the incidence of injuries from falling on the snow.

But other experts and winter sports athletes disagree, saying artificial snow causes more injuries because it is wetter and becomes harder and more densely packed, meaning a fall can result in more severe injuries.

Artificial snow is no new phenomenon at the Winter Games and was first used at the 1980 Winter Games held in Lake Placid, New York, USA to subsidize low natural snow levels. This was after an “exceptionally dry” winter forced organizers to manufacture artificial snow at the different venues.

Other experts from previous Olympics insist that it is difficult to rely on naturally occurring snow when organizing the Games, which can also have an impact on fairness during the competitions.

Various users turned to Twitter to either raise concerns or share their opinion on artificial snow use.

While Beijing people lock down at home, suffering hunger!
Chinese Communist Party is holding Winter Olympic in a man make snow city.
The Games is damaging the Spirit and Image of Olympics.
Beijing Winter Olympics is inhumanity, no human rights, no freedom! pic.twitter.com/jzjMBBCWuY

Well China has area like Beijing where it’s pretty cold in winter (it is currently -5). Artificial snow is used when the weather is not able to produce natural snow. Natural snow is what is supposed to be used, but the weather at Zhangjiakou didn’t produce enough snow apparently

New research from the Sport Ecology Group at Loughborough University in England and the Protect Our Winters environment group suggests that as the climate crisis continues to worsen, winter sports could become less feasible and may even become more dangerous. “The risk is clear: man-made warming is threatening the long-term future of winter sports. It is also reducing the number of climatically suitable host venues for the Winter Olympiad.” The report adds:

“Climate change is eroding the ability of snow and ice sports to take place under natural conditions… We hear that the intensive use of artificial snow could lead to more injuries, warnings over the environmental damage from pesticides used to keep manmade snow cold, concerns that grassroots opportunities will dry up as ski seasons become more erratic.”

Meanwhile, a new study in the Current Issues in Tourism Journal shows that only one of the 21 previous Winter Olympic locations will have enough ice and snowfall to host Winter Games by 2080 if global emissions remain on the current path. The same study finds that by the same year, there will only be nine cities globally with enough snow to host the Games.

“No sport can escape the impacts of a changing climate. Achieving the Paris agreement targets is critical to save snow sports as we know it and ensure there are places across the world to host the Winter Olympics,” said Daniel Scott, a researcher and lead author of the study.

It will remain to be seen what the Beijing Olympics organizers will do to mitigate the environmental concerns raised above. It will also offer the International Olympic Committee (IOC) food for thought when considering future hosts and venues for the Winter Olympics.

Freedom of Speech  1 week ago
END_OF_DOCUMENT_TOKEN_TO_BE_REPLACED