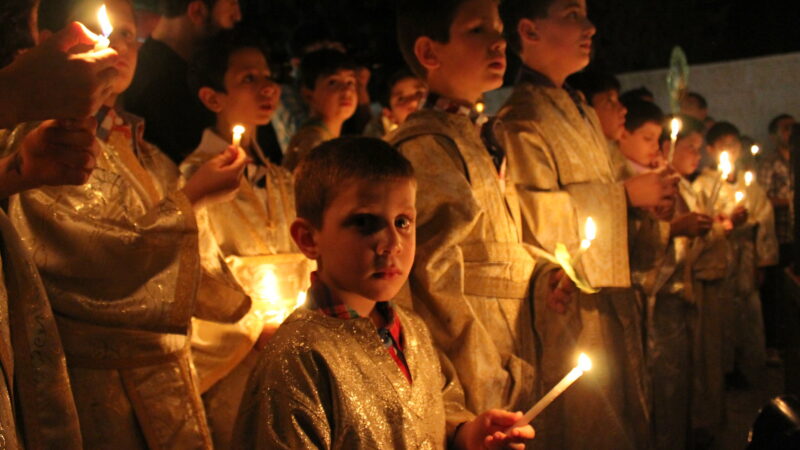 Palestinian Christians have been the target of Israeli aggression, which has driven a large percentage of the religious minority away. Image used under Attribution-NonCommercial 2.0 Generic (CC BY-NC 2.0)

This article was originally published on December 21, 2021 by Raseef22. An edited version of the article is republished by Global Voices under a partnership agreement.

As tensions escalate in Jerusalem in the wake of Israel's latest wave of evicting Palestinians  from the city, it is important to note that Israel's targeting of Arab civilians has not been limited to Muslims alone. It has also reached the Palestinian Christians of Jerusalem, which prompted Christian leaders to let out a cry of distress: “Our existence is shaky and our future is in danger.”

According to the Al Quds International Institution (QII), an Arab NGO that seeks to safeguard the city of Jerusalem, preserve its Arab identity, and save its Islamic and Christian sanctities from Judaizing and Israelizing schemes, the Christian population in Jerusalem is in the neighborhoods of the Old City, Beit Hanina, Beit Safafa, Mount of Olives (Jabal al-Zaytoun), Shu’afat, Dahiat al-Barid, Sheikh Jarrah, Kafr ’Aqab, al-Matar and Semiramis.

Since 2012, in conjunction with the escalation of attacks against Christian communities and sanctities in Jerusalem, the churches of Jerusalem have repeatedly made calls for help against Israel’s attempts to “undermine” the Christian presence in the city. The recent attacks, plots, and violations against them have been viewed as “unprecedented” and particularly worrying.

Terrorizing Christians and desecrating their sanctities

In late December, Father Francesco Patton, Custodian of the Holy Land of the Catholic Church and Chief Custodian of the Christian Holy Places in Jerusalem, said in an article under the title: “Holy Land Christians are at Threat of Extinction: Israeli radicals are waging a war of attrition against peaceful believers who have no desire to fight. We need outside help to survive”.

Patton explained that while the Christian presence in Palestine dates back to more than two thousand years, it has become “threatened and our future is at risk. Where once we numbered 20 percent of the population of Jerusalem, today the Christian community counts for less than 2 percent.”

Father Patton accused “radical local groups with extremist ideologies” of making “the lives of many Christians unbearable” by repeatedly committing “hate crimes” and offences against priests, monks and worshipers alike.

In conclusion, he urged that “radical groups cannot be permitted to undermine the presence of any community or the beautiful diversity which makes Jerusalem the spiritual capital of the world.”

The Times of Israel has conceded that “extremist Jewish activists have for years carried out acts of vandalism against Christian sites in Jerusalem and other areas of Israel, including writing hate graffiti and arson.”

Last week, the patriarchs and heads of Christian churches in Jerusalem appealed to the Israeli, Palestinian and Jordanian governments to stand up to radical groups threatening the local Christian communities.

In their statement, church leaders in Jerusalem referred to physical and verbal assaults against priests, attacks on churches, and acts of desecration and vandalism on sanctities and holy sites. They said that these “continuous abuses since 2012” are now an organized and systematic attempt to drive the Christian community, which is “an integral part of the tapestry of the local community”, out of the city. This poses risks to the freedom of worship and religion in the occupied city.

Likewise, Christian leaders expressed their grave concern about the “failure of local politicians, officials and security services (law enforcement agencies) to put an end to the activities of radical groups who regularly intimidate local Christians.” Members of these groups are also purchasing strategic property in Christian neighborhoods “with the aim of diminishing the Christian presence, often using underhanded dealings,” non-public sales agreements, and “intimidation tactics to evict residents from their homes, and further disrupting the historic pilgrim routes between Bethlehem and Jerusalem.”

Even though it was not specifically named in the public statement, the accusation applies to the agenda and plans of the Zionist “Ateret Cohanim” organization, which is working on filling the Old City and the various neighborhoods of East Jerusalem with Jewish residents after buying the property from non-Jewish owners.

While stressing that pilgrimage is a right for all Christians around the world, the heads of the churches of Jerusalem pointed out its great benefits to Israel when it comes to economy and society.

A recent study by the British University of Birmingham has shown that Christian pilgrimage and tourism contributes USD 3 billion to the Israeli economy. But this activity has recently declined, with Israel banning the entry of Christian tourists and pilgrims until December 22 under the pretext of containing the COVID-19 pandemic and the Omicron variant, even though it has allowed the entry of Jewish groups.

In addition, the patriarchs and bishops warned that the Christian community in Jerusalem, while small in number, provides “a disproportionate amount of educational, health and humanitarian services in communities throughout Israel, Palestine and Jordan.”

Concluding the statement, the religious leaders demanded that the authorities first, “deal with the challenges presented by radical groups in Jerusalem to both the local Christian community and the rule of law, so as to ensure that no citizen or institution has to live under threat of violence or intimidation,” and, second, “begin dialogue on the creation of a special Christian cultural and heritage zone to safeguard the integrity of the Christian Quarter in Old City Jerusalem.”

In a joint article, the Archbishop of Canterbury Justin Welby and the Anglican Archbishop of Jerusalem Hosam Naoum warned of a “coordinated concerted attempt to intimidate and drive away Christians.” They considered that the increase in Israeli settler communities, along with the restrictions on movement associated with the separation wall erected by Israel had “deepened the isolation of Christian villages.”

The repetitive pleas from the Christians of Jerusalem have brought about wide interaction from the worldwide church community. The World Council of Churches (WCC), which represents 349 churches, expressed its strong support for them in a statement stressing the need for Christians in the Holy Land to be “respected and valued as part of both the heritage and future of the region.”

In turn, the “Churches for Middle East Peace (CMEP), an organization based in the United States, stressed the importance of Christian communities in the Holy Land.

According to a recent study by the QII launched in early December, Israeli routes of Judaization follow several simultaneous paths: a religious and urban Judaization path, including cultural, religious and urban landmarks; a path for inventing a Jewish identity for Jerusalem; the path of demographic Judaization; and the path of Judaizing the daily life sectors of Jerusalemites in terms of education, health, and economic and civil institutions.

The research warned of the danger of displacing the Palestinian population, Muslims and Christians alike, from neighborhoods such as Sheikh Jarrah and Silwan and others, under the pretext of Jews having a claim to their homes and lands from decades ago, or under the pretext of public interest, which is the most dangerous tool within the plan to Judaize Jerusalem.