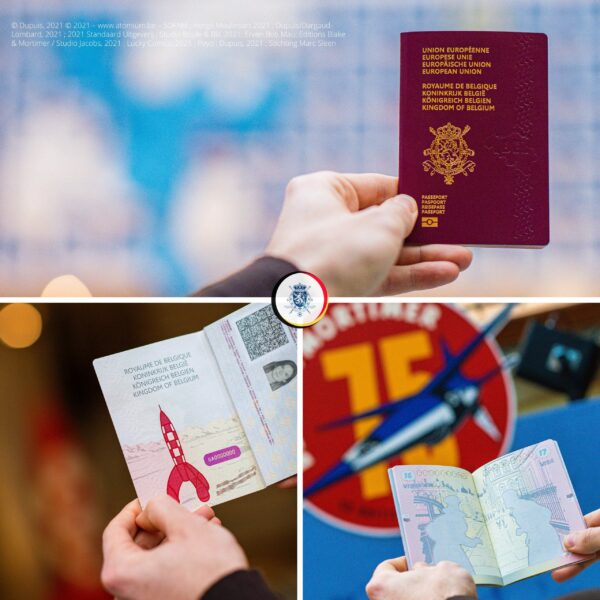 Promotional photo collage published by the Ministry of Foreign Affairs of the Kingdom of Belgium. Fair use.

This story is based on news coverage by Meta.mk. An edited version is republished here under a content-sharing agreement between Global Voices and Metamorphosis Foundation.

On January 27, Belgian Deputy Prime Minister and Minister of Foreign Affairs Sophie Wilmès launched the new Belgian passport. According to the Ministry of Foreign Affairs,  the new passport is more secure thanks to new security and personalization techniques, while the new original design makes it more recognizable “honoring one of the jewels of [Belgian] culture: the heroines and heroes of comic strips.”

The ministry also published a video clip presenting the leafing through the new passport.

The front part of the passport containing the personal data features scenes from the legendary Tintin episode “Destination Moon,” including the iconic rocket, a model of which also serves as mascot at the Brussels Airport.

The new Belgian passport honours one of the jewels of our culture: the heroines and heroes of comic strips whose main theme is travel. The work of Hergé had to be represented, then Tintin will accompany you on your next adventures! 🌏✈ https://t.co/gFU15LnF1T@BelgiumMFA pic.twitter.com/TFLVa3QMKd

The ministry announced that the new passport was made through exceptional collaboration with the publishing houses and right holders, who have agreed to use their famous cartoon figures to illustrate the document.

On the occasion of the launch of the new passport, a temporary exhibition on the history of the Belgian passport will be accessible at the Comics Art Museum from January 28 to March 6, 2022.

In her official statement, the Deputy Prime Minister and Minister of Foreign Affairs Sophie Wilmès stressed:

“The Belgian passport is one of the best in the world, it is a source of pride for us, but also an object of desire for counterfeiters. This is why we are constantly working to improve its security. The introduction of this new passport is also an opportunity for us to highlight the 9th art, the comic strip, which is a central element of our culture and our influence abroad. I would like to thank the publishers, authors and rights holders who have agreed to participate in the project. Finally, a very important point for me: the quality and security of the passport have been reinforced, but the price charged by the Foreign Affairs will not increase. In a context of general price increases, this is a strong gesture that will be cost-beneficial for our citizens.”

The ministry charges EUR 65 for adults and EUR 35 for minors, plus possible municipal taxes. The passport is valid for 7 years for adults and 5 years for minors. It can be obtained in 5 working days via standard procedure, or in a day or less through the urgent or super urgent procedures procedures, at extra cost.

The  response by both Belgian  citizens and international comics fans have been overwhelmingly positive.

Your passport: some dead people, an eagle, a mountain

French political analyst commented on Twitter that “the new Belgian passport is genuinely very cool,” while US cartoonist and art professor Ben Towle designated it as “amazing!”

Let’s say it reflects a shift from a somewhat exclusive and formal character of international travel to a more relaxed and open-minded experience. ;)