'We have to stay and fight and do our part' 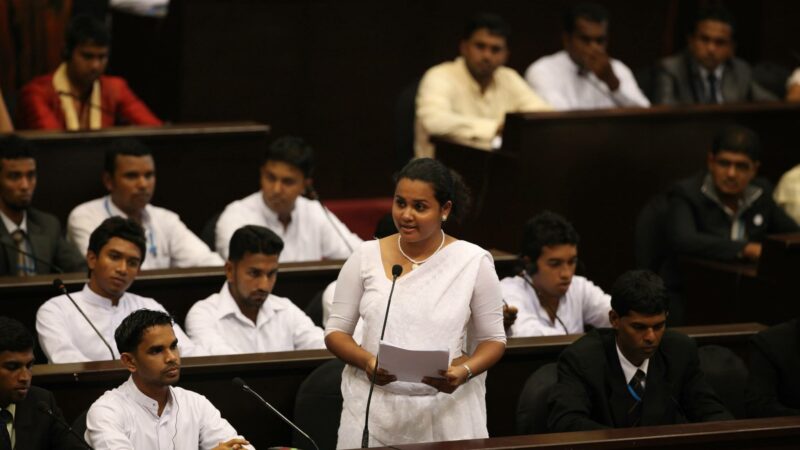 This post originally appeared in Groundviews, an award-winning citizen media website in Sri Lanka. An edited version is published here as part of a content-sharing agreement with Global Voices.

Once known as being the best fed, most educated and healthy people in South Asia, Sri Lankans are facing the bleak prospect of a full-blown economic crisis that will dramatically push back hard-won social gains of several decades. The Sri Lankan economy had a brief recovery after the 30-year civil war which ended in 2009.

The World Bank estimates that 500,000 people had fallen below the poverty line by 2021. Food and fuel shortages, escalating costs of basic goods, import restrictions, school closures and strains on the health system, partly due to the mishandling of the COVID-19 pandemic, have resulted in long queues at the passport office as one in four Sri Lankans, mostly the young and educated, say they want to leave the country. Skyrocketing food prices have left breadwinners struggling to feed their families, as government leaders go with begging bowl in hand to all and sundry. Even Bangladesh, which faces its own economic challenges, has turned into a benefactor.

The passport office queues, heavy demand for immigration lawyers, and many grievances about daily life aired on social media are pointing to the fact that most people are not happy with their lot. They feel there is no hope in a country riddled with corrupt politicians, systemic discrimination and an ever-widening gap between the rich and the poor.

The less fortunate are forced to endure harsh conditions as migrant labourers working for demanding employers in Middle Eastern countries households, factories and offices while the more educated and privileged get to try their luck in a Western country where the weather, quality of life and unequal treatment are challenges.

A recent survey by the Institute for Health Policy (IHP) showed that increasing numbers of Sri Lankans want to leave the country, more than at any time in the past five years. About one in four Sri Lankans would like to migrate if they had the chance. The youth and the educated want this most, with around half of them wanting to leave the country. One in four who wish to migrate already had plans to do so. Apart from inadequate incomes and skyrocketing prices, selling off of national assets and haphazard governance were also reasons for leaving.

In this desperate scenario, what should stop anyone who can just leave? Why sacrifice their children’s futures to serve a country that has no hope of redemption? Leaving must be the right answer.

But not according to Prashan De Visser, president and founder of Sri Lanka Unites, an organisation working to empower the younger generation and motivate them to coexist peacefully, while giving back to their country. “Just because a bunch of robbers come to your house and ransack it, you don’t pack up and leave; you stay and fight. We have to stay and fight and do our part and we can,” he told Groundviews in an interview:

Groundviews (G): Why are people leaving the country or feeling they need to leave?

Prashan De Visser (PDV): There has always been an exodus of capable people, with an estimated three million Sri Lankans living offshore. Waves of people are leaving and the brain drain has a direct impact on hopes of becoming a developed country. This generation sees the world more clearly because of social media, access to information and interaction with other young people across the world. The choice is to go because they are not going to achieve their potential here. There are some who are not seeking to leave the country forever but intend to return. However, once you get sucked into life there, it becomes impossible to come back. We need to address this because the country can’t withstand another generation or two of a brain drain.

G: How can people be convinced to stay?

PDV: Not everyone will be inspired by their duty and responsibility to the nation. People who are leaving are the privileged ones who can get visas to go abroad, but we have a responsibility to those less privileged. People who want to leave should realise that if you go to the West, your success is not guaranteed, so these exaggerated notions should be taken away. There are people who have made a success here, having seen opportunities and achieved more here than they could have anywhere else. We have an ageing population, parents who provided and cared for us.

G: How can minorities be made to feel they are part of the country so they don't want to leave?

PDV: Governments and politicians have failed us and created a divisive culture of divide and rule. Fellow citizens are treated as second class. We have a responsibility to speak out against injustices; for too long we have been passively against it or turned away. The cost to pay is that people will embrace extremism and send the country back through cycles of violence. You and I can’t continue to be silent about discrimination and racism and have to speak out. People are realising that politicians have created hate to hide their political incompetence.

G: What gives you any cause for optimism?

PDV: Given everything we have been through as a country, we have to be optimistic regardless of how bad the situation is, as it is darkest before light. This generation can be the generation that thinks beyond themselves and have a vision for the country where no one is a second-class citizen. Young people want to serve, be honest, and be held accountable, living beyond the parameters of their own selfish needs so we need to invest in them to come together across ethnic, religious, professional and regional lines. This is what gives me hope. For 15 years I have been dedicated to working with young people, mining for the incredible talent of young Sri Lankans who are the greatest asset of our nation. We need to ensure that they are not depressed or lose the capacity to hope.

G: What changes have you seen through your work with Sri Lanka Unites?

PDV: Students who believed that violence was the only way and hated others today believe in peace. Sinhalese from the south who thought every Tamil was a terrorist now see the injustices done and speak out for them. There are hundreds of stories of young people whose minds have been transformed; they want to be part of the solution.

G: What do you hope for your children's future?

PDV: We have two sons aged three and four. If we went abroad we could have a more affluent lifestyle but we decided to stay and serve here. The question is whether our sons will curse us 20 years from now and ask why we didn’t leave. That means I have a responsibility to work hard so that they will proud of our generation for not giving up, and we can talk about the history of violence, broken structures, poverty and corruption in the past tense. We would have lived up to our potential and become a model to other nations — a success story from bankruptcy to a thriving nation. It seems improbable and impossible right now but all things that inspired us seemed improbable until they were done.

We have to give it a shot, give it with everything we have got. Politicians and political parties have no solution or vision so it is we the people who have to transform the country.