It was world's strongest volcanic explosion in over 30 years 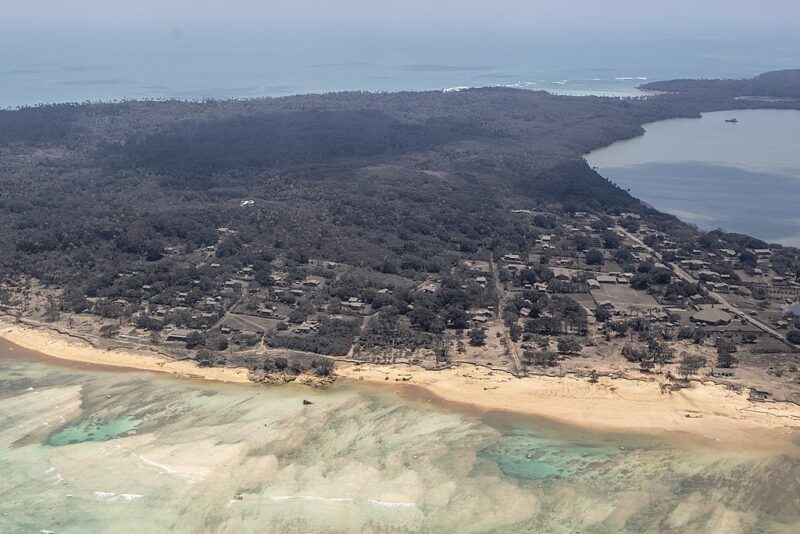 An area of Tonga that shows the heavy ash fall from the recent volcanic eruption within the Tongan Islands. Source: Wikipedia. Photo by NZ Defence Force, (CC BY 4.0)

The Hunga-Tonga-Hunga-Ha’apai underwater volcano erupted on January 15 spewing ash into the atmosphere and surrounding regions, and triggering multiple tsunamis that devastated several islands in the South Pacific nation of Tonga.

Scientists estimate that it was the strongest volcanic eruption on the planet in the past 30 years. The Hunga explosion was also the loudest noise on Earth in the past century. Tsunamis related to the eruption were recorded as far as Japan, the United States, and Peru.

According to the Tonga government, ashfall and a tsunami from the volcanic eruption affected an estimated 84 percent of the population. It took several days for power and internet connection to be restored on the main island.

First-hand accounts of the eruption

Matangi Tonga Online, a news website, reported that communication lines continued to be unreliable almost a week after the eruption:

This is a traumatic time for everyone in Tonga and also for our families overseas who are anxious for news. We are disrupted from our normal activities.

Our communications were knocked out along with our main power.

Slowly, bit by bit services are being restored. We do not have full internet in our office. We are able to upload today thanks to a service provider, sharing a limited satellite link.

When internet was partially restored in some areas, Tongans were able to post photos of the destructive impact of the eruption:

Scenes from Tongatapu… Lots of dust, damage and clean up to do! But generally calm and stable. People are ready to get to it. Praise God we are still standing. #Tonga #TongaVolcano #tongatsunami pic.twitter.com/7VCWOFriow

Some Facebook users, such as Tevita Tai Fukofuka, also shared their experiences during the eruption:

…it felt like the heavens cracked open and the world exploded inside my ear. It left my ears ringing as if I’m in a descending plane and I’m half deaf for a couple of seconds. I’ve never heard a louder noise in all my life. Everything shook. The car, house, earth. I look up the sky and see a dozen flocks of birds heading in all directions

… Down came the sulphur ash rain in the form of pebbles, ash and dust. We can hear it on the our roof and the houses along the road. The sky darkened full of ash clouds forcing night on us.

The owner of Ha'atafu Beach Resort recalled how their family and guests were able to survive the first tsunami wave:

According to Moana [the resort manager], the first tsunami wave actually hit before the major eruption happened. So they actually didn’t even have time to do anything as the waves continued to sweep through the land. Once the guests had escaped, Moana, Hola and the kids actually had to climb up a mango tree to escape the waves before fleeing into our family friends car and eventually rushing off in land in the nick of time.

A survivor remembered the tsunami reaching as high as a coconut tree:

“The sea was already as high as the coconut tree. We dropped everything and jumped in the car. As we drove off, the clouds darkened.” Ma’ata, 10, from Kanokupolu Village in Tonga.

An estimated 85,000 people, including 36,500 children, have been affected by the tsunami. pic.twitter.com/RpaIvAz9LN

Hon. Frederica Tuita saw the roads covered with three inches of ash. She was separated from her children and was relieved to see her family again:

As we drove on the road, no other vehicle was moving, everyone had been told to find shelter, anyone found driving around by police were instructed to park there. Everything was covered in at least 3 inches of ash. The road was dark and the island was completely still with uncertainty lingering in the air. We turned into my home and relief washed over me as I saw candle light shining out from inside. As I walked up I greeted my sister and her husband who had sought safety there and walked inside to all 3 of my children running towards me. I knelt down and embraced them all at once, this was all the sustenance I needed.

She also posted a video showing the extent of the ash fall in her community:

We're all still cleaning up after the volcanic eruption. Some roads are a little better than others with the dust. The impact of the volcanic ash and dust on our people will start to show months maybe years from now #TongaVolcanoEruption pic.twitter.com/I6wbU7N9WB

Lisala Folau remembered not responding to his son while he was washed away by the tsunami so that his son will not follow after him:

This was 7pm.
We floated at sea, just calling out to each other. It was dark and we could not see each other. Very soon I could not her my niece calling any more but I could hear my son calling. The truth is no son can abandon his father. But for me, as a father I kept my silence for if I answered him he would jumped in and try to rescue me. But I understand the tough situation and I thought if the worst comes and it is only me.

My thinking was if I answered him he would come and we would both suffer so I just floated, bashed around by the big waves that kept coming.

He floated in the waters for 27 hours before he was rescued. His story was covered in the news:

A 57-year-old Tongan man, Lisala Folau, is being hailed a real-life ‘Aquaman’ for surviving 27 hours at sea after the devastating tsunami struck his island. Folau told @Reuters he went under nine times before latching onto a log and making it to safety https://t.co/7UtwLEeooD pic.twitter.com/mWLuEzvKIE

The Facebook page Ordinary Tongan Lives shared photos and interviews with some survivors. One survivor lamented that they could no longer go back to their island:

There’s a yearning to be back home. But there’s only very few houses, a church, and a school building standing there. Everything else is gone. The middle of the island has long ditches running across from the waves. It’s only been a week but the memory of it all will take a while to go away. Last night, my daughter called at 2:30am asking me what noise she’s hearing. Imediately, I panicked. Every noise, even a roaring vehicle can strike fear. That’s a reality we have to live with now.

Relief and recovery efforts are ongoing in Tonga. Since the devastation, residents have organized clearing campaigns to clear the airport runways so that aid from other countries can be delivered.

Tongans sweep the runway of Salote Pilolevu Airport in Ha'apai with brooms following the #TongaVolcanoEruption. Not sure what happens with the ash but I've heard ads on the local radio livestream from at least 1 local company willing to buy the stuff in bulk. #TongaVolcano #Tonga pic.twitter.com/XBcRN2ShLZ

Tongans have started rebuilding their lives and communities but many are worried about the future since the island nation is also at risk from the harsh impact of climate change.