Will the Gambian beat Cameroon in the quarter-final? 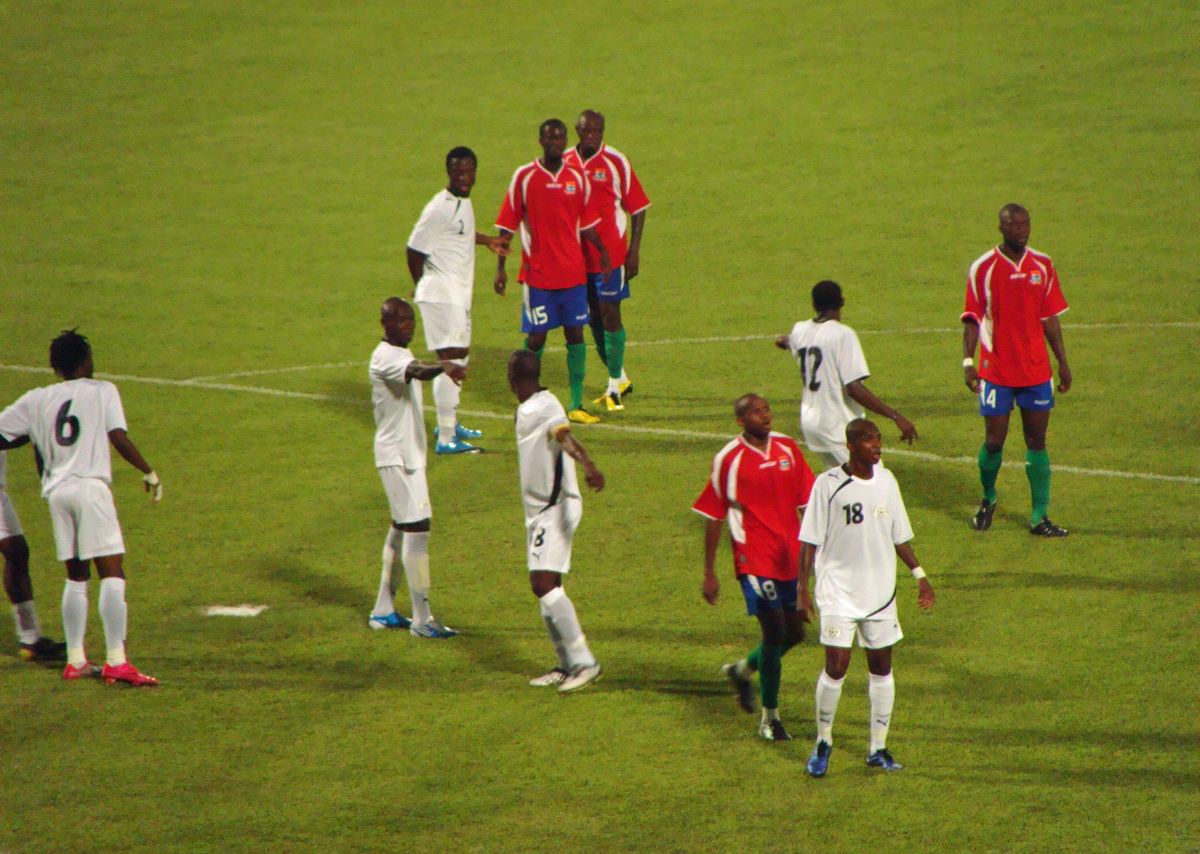 When The Gambia arrived in Cameroon for the Africa Cup of Nations, many thought they were just there to make up the numbers and won’t surely be a force to reckon with. But they have proved everyone wrong and have hit form at the continent’s premium sporting tournament in devastating fashion.

The Scorpions have enjoyed one of the most spectacular debuts in the history of the Africa cup of Nations reaching the quarter-finals in their maiden appearance.

After finally ending a long wait to feature at the Nations Cup, The Gambia navigated a sequence of testing fixtures en route to reaching the last eight and will certainly look at their past games with great pride.

The statistics back up the assessment. Drawn in Group F of the delayed Nations Cup, The Gambia finished second on the logs with 7 points from three unbeaten games. They edged Mauritania 1-0 to earn their first ever win, drew with Mali (1-1) and beat Tunisia (1-0) to seal a spot to the knock-out stage.

Their heads did not drop as they eliminated Guinea to reach the quarter-finals. In a nutshell, The Gambia won three of their four AFCON games scoring 4 goals and conceding just once.

The Gambia has produced some tactically brilliant displays and few teams have been able to match them for quality. Questions have been asked how a team that once looked doomed in the past, now seems increasingly capable to mount an unlikely title chase in a competition that provided them with dark moments.

They have three more hurdles to negotiate before they can claim the Holy Grail. Cherno Badja, a coach in Gambia and member of the country’s football players association believes the Scorpions are driven by the desire to improve and can do the unthinkable. “It’s beyond our wildest dreams being here, given the poor preparations we had before the tournament. But we are very happy and now we believe that we can go all the way and bring the trophy home,” he told Global Voices.

Out of inconsistency comes stability

The Gambia has come a long way and its rise to prominence at the Africa Cup of Nations hasn’t been a straight forward journey.

Its history is dotted with frequent disappointment and failures. Before making their debut at the 2021 Africa Cup of Nations, The Gambia was the only West African country yet to qualify.

In 1975, they entered their first qualification for the Africa Cup of Nations but failed to reach the 1976 finals in Ethiopia after a humiliating 6-0 aggregate defeat to Morocco. Since then, there have been recurrent themes of frustration as every attempt to break the spell seemed futile.

In May 2014, The Gambia was banned from CAF competitions for two years after deliberately falsifying players’ ages. Due to the ban, Africa’s smallest mainland nation missed out a chance of qualifying for the 2015 AFCON. That verdict from Africa’s football governing body, only added more misery and pain to their quest of playing elite football on the continent.

But in 2019, they almost broke the jinx. They came so close to qualifying for their maiden competition after finishing four points behind second place Benin. It was a new era for the team that was completely bolstered. During the qualifiers, they held Algeria twice to a 1-1 stalemate. Those were genuine signs they had recovered from their setbacks and had plotted to overturn their misfortunes.

Their remarkable form helped them to qualify for the following edition of the AFCON. It was an appropriate reward for their endurance and a well-established plan facilitated by an abundance of talents.

Kebba Touray, first vice president of The Gambia Football Coaches Association, who is also head coach of Bakau United FC, told Global Voices that “we’ve been yearning for this moment which has never come. Our first game and first goal was a great moment in AFCON. I’ve followed the team through the qualifiers, and I’m not surprised. It is a tactically disciplined team.”

“Talent has never been our problem. In 2005, we hosted the Under-17 AFCON and won it on home soil. The same year we qualified for the African championship. From the Under-17 team they graduated to the Under-20 where we went to the U-20 championship and ended up with a bronze medal. Then proceeded to Canada for the Under-20 World Cup. Rebranding sounds funny for many Gambians but I think that is what paved the way for us now,” Kebba said.

The Gambia’s domestic league has also been instrumental in the last couple of years. About 95% of the current squad is made up of local grown players, most of whom started with community football. The championship is now highly ‘competitive’ and there have been improvements in the teams.

Their stunning debut at the Africa Cup of Nations means Gambian's football will enjoy a new lease to life in future. With some Gambian players also attracting the interest of European clubs, there is optimism that more and more talents will make moves abroad. Kebba further asserts that:

The league has been very competitive and very positive. Now we see players moving out of the country which is a sharp contrast from the olden days. Overall it has been very much progressive for The Gambia. Now, I think the players have opened up to the world and the world has seen what The Gambia is made of. Although people are moving out of the country to play professional football in Europe, I think this time around people will know that there are talents in that small tiny country.

Buba Jallow, a Gambian football expert who’s been covering the team for the last five years believes it’s high time for football in the country to gain elevated status after several years in bondage.

“Some players didn’t have opportunities. We had talents at our disposal but we didn’t have the exposure. That’s why we have arrived late at the continental stage. Our performance at the AFCON is a wakeup call for the government, for the entire private sector to invest more on sport, especially our football. The success and the story of Scorpions will pave the way for greater opportunities in Gambia,” Jallow said.

Poised for victory against the host? 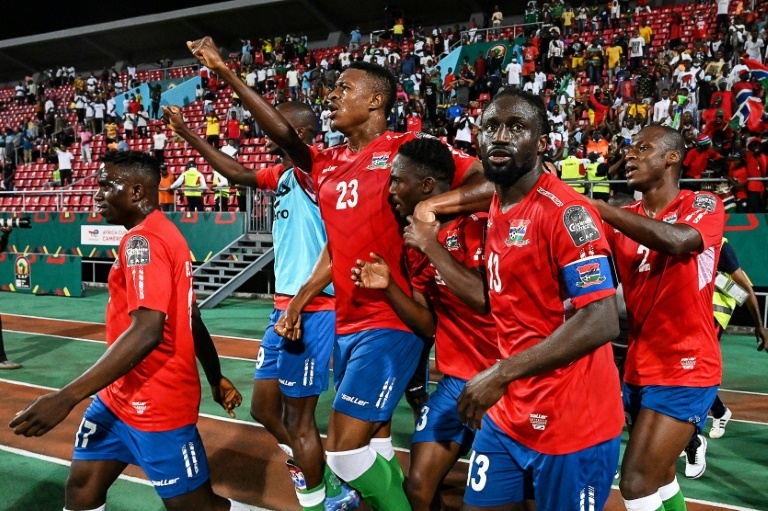 The Gambian's Scorpions celebrating a goal in the ongoing 2022 African Cup of Nations. Image by The Gambia Football Federation.

The Gambia faces host nation Cameroon in their first ever quarter-final of the Africa Cup of Nations on Saturday, January 29, at the Japoma Stadium in Douala.

The game promises to be full of twists and turns. But the Scorpions will fancy their chances and pose a real threat to five time African champions, the Indomitable Lions.

It will be another huge challenge for coach Tom Sainfiet who was appointed in 2018. By then, The Gambia were ranked 172nd in the FIFA rankings but today they have settled at the 150th position.

Saintfiet, a former gaffer of Togo and Zimbabwe national teams has no doubt been one of the main catalysts behind their decent display. He has been able to turn young prospects in a team capable of playing at such an elite level and plausible winning titles. Jallow further emphasised that:

I think the Gambia can go a long way. I’m optimistic. This is a unique story. The coach has been putting a lot of confidence on these players and the players in turn believe in themselves. This AFCON means a lot to the Gambia as a nation. The more games we have, the more our confidence swells. There have been celebrations throughout the tournament since we won against Mauritania. We believe in ourselves. The last time Cameroon won the Africa Cup of Nations in 2017, they didn’t have the best squad. They had a good coach and great players but it wasn’t the best of the team. And Zambia also did so when they won the Africa Cup of Nations back in 2012. All these are inspirations especially for the players.”