Pinning abolition to anything but humanitarianism challenged Britain's playbook 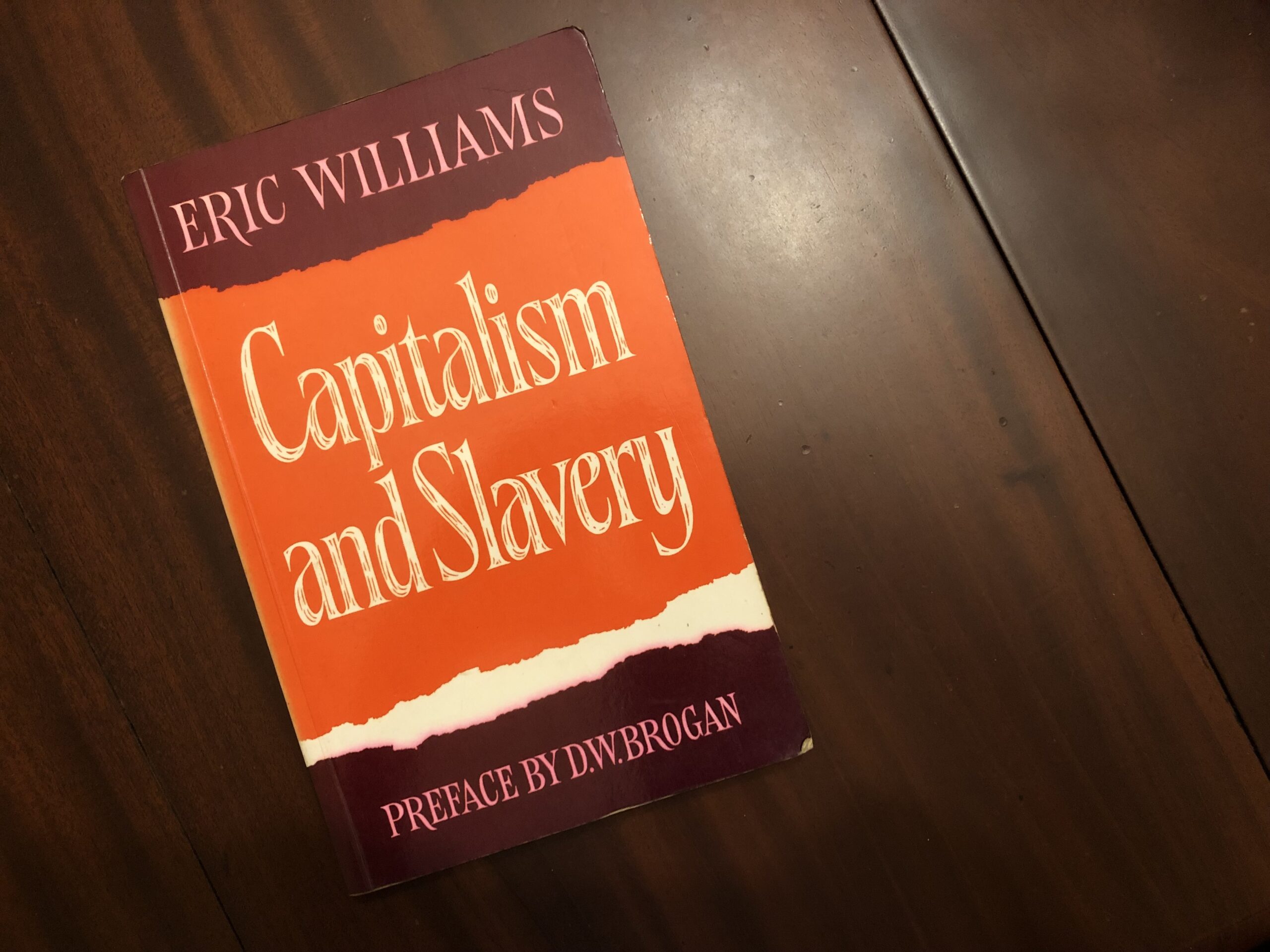 Photo of Eric Williams’ ‘Capitalism and Slavery,’ the ninth printing of the British, Andre Deutsch, edition (dated 1990), by Nicholas Laughlin, used with permission.

“Capitalism and Slavery,” the published form of Eric Williams’ doctoral dissertation, famously argues that the decline of the transatlantic slave trade was precipitated, not by the sudden moral enlightenment or conscience of slave owners as the prevailing British narrative claims, but rather, by economics.

Williams, who later became Trinidad and Tobago's first prime minister, put forward a compelling case for this revolutionary argument in the late 1930s during his time at Oxford University; he described the work as “first, a study in English economic history and second, in West Indian and Negro history […] a study of the contribution of slavery to the development of British capitalism.”

The book, light years ahead of its time when it was first published in the United States in 1944, is currently receiving new interest after both the UK Observer and Guardian erroneously claimed this week that after more than 80 years, the groundbreaking work was finally getting a British publisher.

As Trinidadian Reginald Dumas pointed out in a letter to the editor of the Trinidad and Tobago Newsday, however, his copy of the book “states very clearly that it was published by Andre Deutsch of 105 Great Russell Street, London, in 1964.” Meanwhile, British writer and academic Paul Gilroy tweeted:

The Guardian subsequently issued a correction stating that it had amended its headline and original article due to its incorrect claim that Capitalism and Slavery was first published in the UK “in 1966 when a small university press gave it a very limited print run,” noting:

It was published in 1964 and then reprinted a number of times; and the André Deutsch publishing house was not a university press.

Nevertheless, the fact that the book is enjoying a resurgence is unsurprising to many in the Caribbean. At the Trinidad and Tobago-based Bocas Lit Fest‘s 2019 event, the year that marked the book's 75th anniversary, there was a discussion about “Capitalism and Slavery” as part of Bocas’ “Big Ideas” segment. The literary festival — arguably the premier such event in the region — credited the book with “chang[ing] the way we understand colonialism, the British Empire, the institution of slavery, and the rationale for Emancipation.”

The panel, which was chaired by academic Gabrielle Hosein, comprised historians Selwyn Cudjoe and Heather Cateau, as well as writer Caryl Phillips. Festival director Nicholas Laughlin introduced the book as “a work of economic history that's very much based on things like trade statistics […] but that also has a much wider cultural significance because of the arguments it makes [and] the ground it covers, [as well as] how it fits in to our contemporary understanding of our past, but also our present.”

The tone of the book might best be reflected by a quotation from Williams himself, which the moderator used to kickstart the discussion:

The West Indian historian of the future has a crucial role to play in the education of the West Indian people in their own history, and in the merciless exposure of the shams, the inconsistencies, the prejudices of metropolitan historians.

Panellist Selwyn Cudjoe, who praised the book for “giving voice to the voiceless,” made the point early on that “Capitalism and Slavery” is “not about stale facts and history, but the philosophical attempt to understand a particular social phenomenon.”

Caryl Phillips, the sole novelist on the panel, acknowledged the ways in which writers often stand on the shoulders of historians like Williams, who once said, “History is the basic science” — which Phillips took to mean, “If we don't understand the various forces that have shaped our past, we just cannot possibly understand the present [and therefore] no possibility of shaping the future […] particularly in the Caribbean context, where so much of our history has been corrupted and corroded by others interpreting our lives for us.”

Admitting she's never found it an easy book to read, historian Heather Cateau said that it is a multi-layered text which at its most basic level says, “This is what the world is like.” She also stressed that only someone like Williams, with his particular experience as a well educated and well travelled black man born into colonialism, could have written the book — with Phillips adding that, like his compatriot C.L.R. James, Williams had a profound love of the English language, which comes across strongly in the text.

With regard to the issue of Emancipation, the economic fulcrum on which it hinged, and the question of whether it came “from above” or “from below,” Cateau explained:

As for the book's contemporary significance, Phillips said that it is now held “as a complete truth” that slavery funded the Industrial Revolution. For Cateau, it was Williams’ warning that “the ideas built on these interests” continue. “We have to guard,” Williams says in the book's conclusion, “against these old prejudices, but also against new, which are being constantly created; no age is exempt.”

In a time when African Americans have had to form movements to make their compatriots see that Black lives matter, Williams’ words ring true, solidifying him as the visionary that he was:

[These points] are not offered as solutions [to] present-day problems. They are noted as guideposts that emerge from the charting of another sea which was, in its time, as stormy as our own. The historians neither make nor guide history [but] if they do not learn something from history, the activities would be cultural decoration or a pleasant pastime, equally useless in these troubled times.

You can watch the full panel discussion, here.