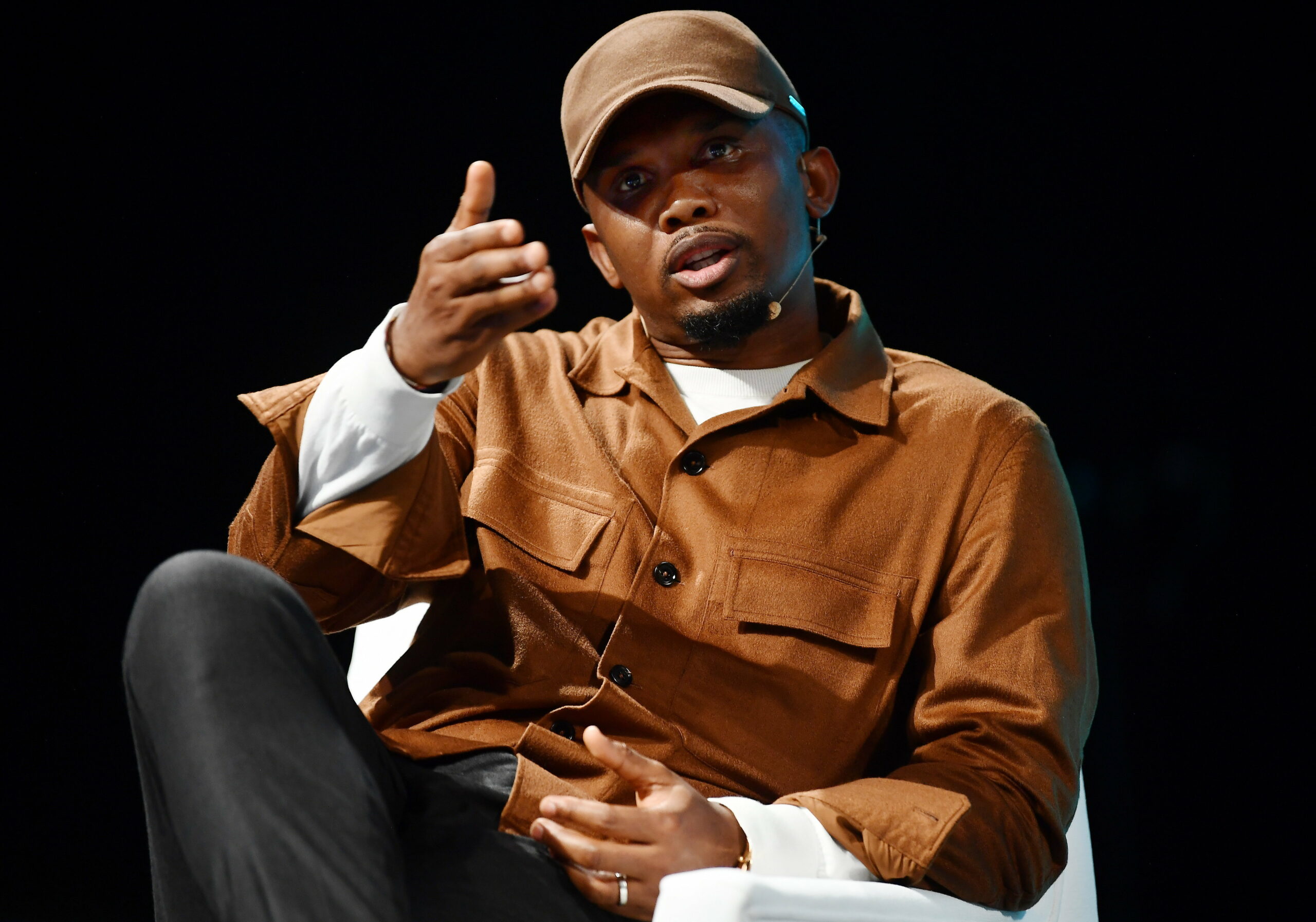 Samuel Eto’o speaks in Lisbon, Portugal, after being presented with the Web Summit Innovation in Sport Award. Photo by Diarmuid Greene/Web Summit via Sportsfile, November 2, 2021, (CC BY 2.0)

On December 11, 2021, Cameroonian star and international football sensation Samuel Eto’o, 40, was  elected president of the Cameroon Football Federation (FECAFOOT). After the joy of his victory which reverberated on the streets of Cameroon has subsided, the football legend now faces the great task of rejuvenating the country’s football back to its global golden status.

Eto’o won with 43 votes, against incumbent Seidou Mbombo Njoya’s 31 votes, during the general assembly of FECAFOOT. He is the third former footballer from that Central African nation to head FECAFOOT, after Emmanuel Mve and Pascal Owona Baylon.

The Cameroon great has his sights set on achieving his objectives at all cost. Eto’o spoke to this reporter during a short press briefing immediately after his election in Mount Febe Hotel, Yaoundé:

Thanks for making me your 17th president. I want to thank the delegates for bestowing the confidence on me. And to those who didn’t vote for me, I hereby extend my hand for collective work. I sincerely thank and appreciate Seidou Mbombo Njoya for the incredible work he has done so far. We shall start work immediately to ensure that our football is taken to higher heights. I have taken the challenge to give my best and I always deliver.

Yesterday officially marked my first day as the new president of @fecafootofficiel. Thank you to my predecessor @MbomboSeidou for passing the baton. I have high hopes of what can be achieved in this next chapter of Cameroonian football 🇨🇲 pic.twitter.com/AXtRC695bc

The former FC Barcelona and Inter Milan star is adored in Cameroon and admired across the globe. The former footballer, now sports administrator, shoulders great expectations. Many are looking forward to great changes after a monumental collapse of Cameroon football.

“This is the time to bring in change. Eto’o has been a great player on the pitch and he has to use that greatness off the pitch this time. So many people are looking up to him. And to whom much is given, much is expected,” Etienne Mainimo, a sport journalist in Cameroon told this reporter in Yaoundé, venue of the FECAFOOT election.

Once Eto’o’s victory was announced, his fans flooded the streets in various cities to celebrate his win.

Exhiliration at the Samuel Etoo street in Nkongmondo, Douala where Etoo spent part of his childhood.

“I am so happy and excited. It is unbelievable; I can’t believe this is happening, I am speechless. They said we could not win. But finally Eto’o has finally been elected president. We knew we would win and today we have,” Otto Bernard, a supporter, told Global Voices, as he dropped to the ground in joy. Although Otto was denied access to the election venue by security officials, undeterred, he waited at the gate till the election ended. “He is the savior of Cameroon football and I have no doubt in the next couple of years, we shall see total transformation. We trust in him and he has all our support,” Otto stated.

The time to move ahead together

Samuel Eto’o takes over management of the Cameroon Football Federation at a perilous time, with the sport undergoing perennial administrative upheavals.

The internal squabbles in FECAFOOT have deterred football from its glorious path. The feud between FECAFOOT and the Ministry of Sport has generated some bad blood among club presidents , causing disunity among football administrators and untold harm to the game.

Raymond Elume, a Cameroonian Sport analyst told  Global Voices that he believes that “Samuel Eto’o is the candidate for unity. That is what he represents to me. Eto’o can bring the football family together.”

Eto’o is reported to have made a lot of enemies during his hay days with the national team. Hence, he appreciates how important reconciliation is in his quest for exemplary leadership.

“You have to bring the various fractions on the table. It is true that these people will not have the same ideology as you, but do your maximum best to see that you bring these parties together. Great leaders don’t live by regrets. They rather live by examples. This is the time we need to move ahead”, Etienne Mengnjo Mainimo asserted to Global Voices, a day after the elections in Yaoundé, Cameroon.

Abah Isidore, freelance investigative journalist and strategist told Global Voices via WhatsApp, that “there was a need to change the status quo because people who were calling the shots were politicians and they had nothing to do with football. Footballers are coming back to manage the affairs, it will actually cause a paradigm shift, so that people can get to trust the league and enjoy it,” he said.

Despite satisfactory infrastructural growth, football in the Central African nation is crumbling under the weight of corruption. Football is played more in the offices and courtrooms than on pitches. The sharp decline in the promotion and interest of local football over the years is telling of how the country’s most popular sport has been widely affected.

Atia Tilarius, award winning Cameroonian journalist told Global Voices that “it is very important to have a change in the leadership of FECAFOOT. When a kingmaker becomes king, it is to straighten the things that his protégé could not do. Long stay in power breeds corruption, and complacency. A new leader is bound to perform and secure a fresh mandate. This will go a long way to improve Cameroonian football.”

Cameroun won it without conceding a single goal in open play.

Tilarius also believes there is a glimmer of hope with Eto’o's accession to power, “As a former footballer, Eto’o should already know that Cameroonians football has been struck in a time warp mainly due to moribund leadership that increasingly appears to be out of touch with reality. Since Iya Mohamed fell out of power, the management of Cameroon Football has never known good.” 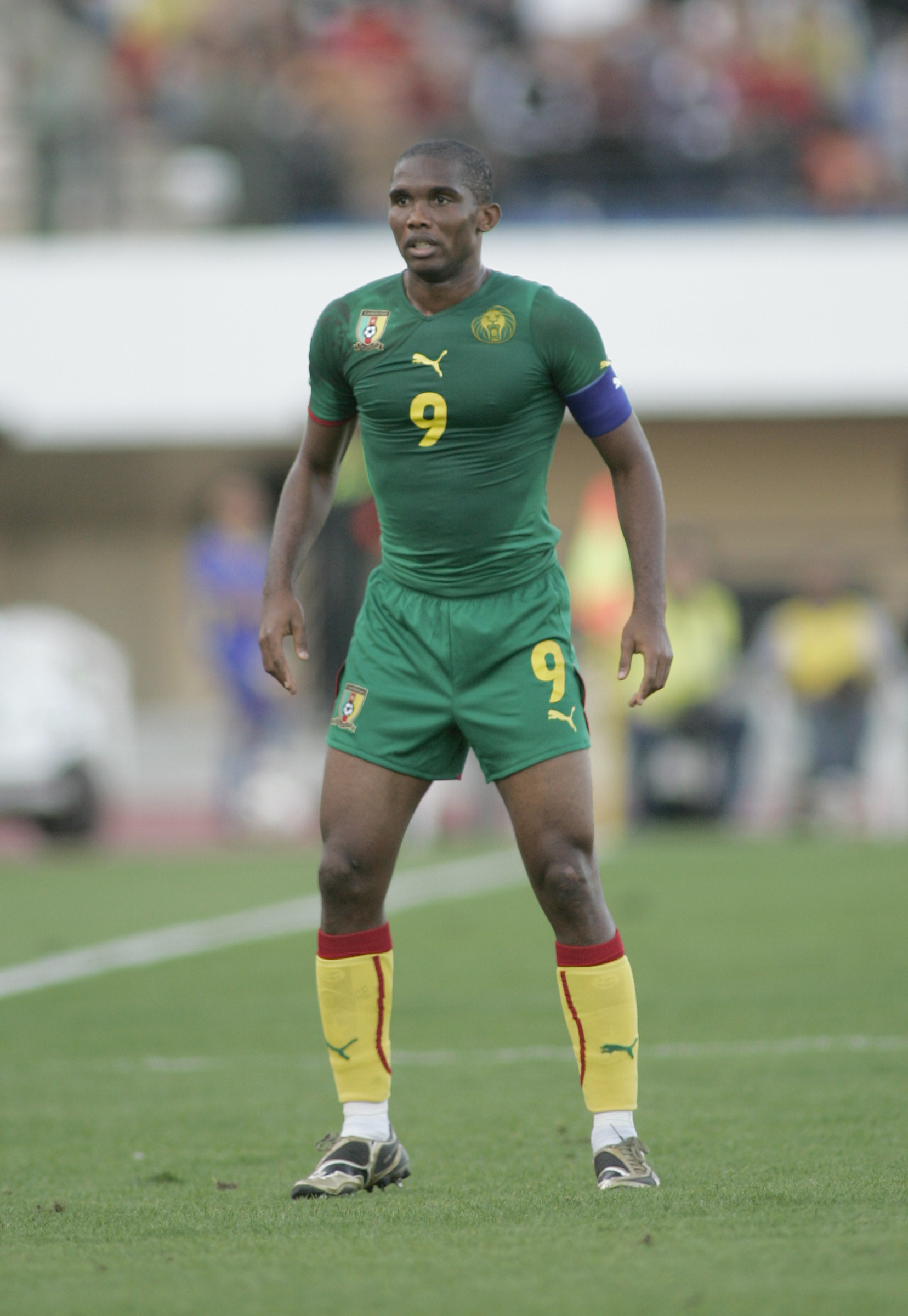 Samuel Eto’o astronomical rise to the top of his career is enough to inspire a change in the way football is perceived in Cameroon.

“Samuel Eto’o did not play Elite One and Elite Two football, he was an amateur football player. He left from an amateur league straight to Real Madrid. That is the dream that Cameroon Football should now have. If you look at the talent pool of Senegal, and Ivory Coast, is what we should be aspiring for,” Raymond Elume told Global Voices.

The reforms  from Samuel Eto’o’s led team – which will serve as a springboard for better organization and a sponsor-backed domestic championship – didn’t take long to come.

President Samuel Eto’o is in charge and is hitting the ground running. pic.twitter.com/n4h2lv9JkW

Kudus to Samuel Eto'o who got to work as soon as he was elected, leaving no room for the Lions to feel the impact of transition and power vacuum before his installation. We thank him for the moral and material booster towards our team!

On January 5, 2022, FECAFOOT announced an increase in the prize money for the Elite One and the subsidies to clubs, after a meeting with the Association of Elite Clubs (ASEC).

However, Eto’o’s ambition for football goes beyond Cameroon, he wants an African country to win the World Cup.