According to surveys, Bukele's popularity in El Salvador is undeniable 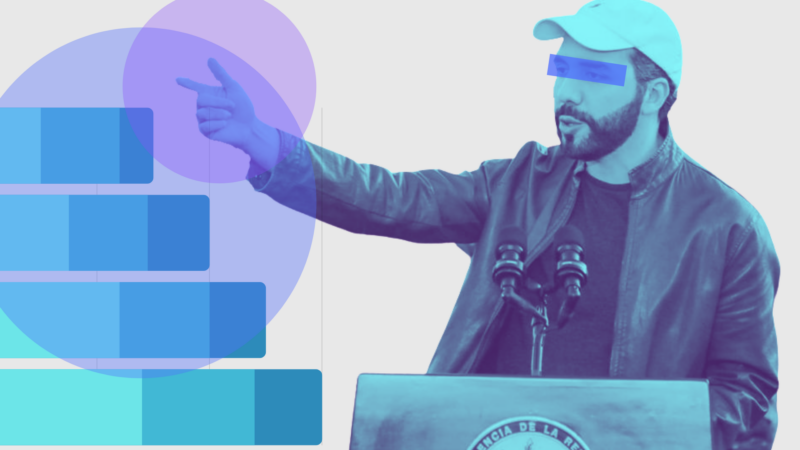 Despite accusations of negotiating a secret truce with organized crime, authoritarianism, corruption, and nepotism, Salvadoran President Nayib Bukele keeps a strong score of popularity among Salvadorans.

During the first half of his five-year term, the international community has condemned military actions, such as when Bukele entered the Salvadoran parliament with heavy-armed military staff to pressure legislators into approving the financing for his security plan in February 2020.

In 2021, his political party Nuevas Ideas (New Ideas) gained absolute control of the legislative branch. On their first day of work, they removed and replaced the attorney general and all five magistrates of the Constitutional Chamber of the Supreme Judicial Court, sparking fear of erosion of El Salvador's hard-won check-and-balances system. Bukele has also fallen out with the Biden administration, on top of being accused of spying on members of the Salvadoran press.

Bukele's actions have provoked international condemnation by human rights groups, the international press, and many foreign government officials. Within El Salvador, however, the president's governance keeps him popular.

The trust Salvadorans place on President Bukele is slightly higher now than when he got elected, going from 61.4 percent in 2019, according to the Jesuit-led University of Central America (UCA), to 67.9 percent in December 2021, with a peak in May 2021 with 86.6 percent.

Surveys, which are conducted by two prestigious Salvadoran universities including UCA, a local newspaper critical of Bukele, and an international organization, CID Gallup, show his overall average approval rating of 2020 and 2021 is 90.04 percent. They cite the lowering homicide rates and managing the COVID-19 pandemic as the top reasons for his popularity.

In early 2021, the Lowy Institute ranked El Salvador as the best in Central America regarding managing the pandemic; and number two in Latin America. In conversations with Salvadorans, the population seems to agree with El Salvador's confinement measures and vaccination rates and see improvement in the healthcare system. Also, the past couple of years set low records in lethal violence in a country known for its high homicide rate.

Yet, in 2022, maintaining high approval ratings may not be easy for Bukele. The principal pillar of his popularity, lowering the number of homicides, has come under heavier scrutiny.

On December 8, 2021, the U.S. Department of the Treasury issued sanctions against two of Bukele's cabinet members. Osiris Luna Meza, the Chief of the Salvadoran Penal System and Carlos Amilcar Marroquin, Chairman of the Social Fabric Reconstruction Unit.

According to the U.S. Treasury Department, Luna and Marroquin organized secret meetings involving incarcerated gang leaders and gang members on the outside. The report stipulates that they facilitated the entrance of gang members into high-security prisons to secretly meet with senior gang leadership.

In his usual antagonistic manner, Bukele responded to the accusations on Twitter, saying that U.S. authorities use old evidence and support the political opposition, which has been previously accused of negotiating with gangs.

Cell phones and prostitutes in prisons?

When did that happen?

They didn't even check the date?

How can they put such an obvious lie without anyone questioning them?

There are videos yes, but of their friends doing that. Not us.

They don't even pretend anymore.

Accusations that the Bukele administration has been negotiating with gangs are nothing new. Online investigative newspaper El Faro has been reporting on these negotiations since before 2020 dating back to when Bukele was mayor; however, most people in El Salvador do not believe it. The latest survey from UCA reports:

(Survey question.) Throughout this year [2021], some media outlets have revealed information about possible negotiations between the current government and the gangs. Do you think the government negotiated with the gangs or that it did not? 60.2% responded that there is no negotiation.

Besides the accusations of negotiating with gangs, Bukele faces other issues that could affect his approval rating. For instance, accusations of human rights violations, corruption, and spying on reporters and activists. As of September 2021, Bukele has also been facing regular protests. Different groups of society are protesting his authoritarian governing style, the use of the military for security purposes, and the increasing rates of disappeared persons.

Other reasons for Bukele's popularity

Nevertheless, despite all the accusations and condemnations, Bukele still has a high probability of maintaining a high approval rating in 2022. Here is why.

First, Bukele is a savvy communicator. Also, he has government-sponsored media outlets, such as a TV station and print newspaper, that help spread the government's messages. President Bukele's favorite way of communication is his Twitter account.

Second, traditional media outlets critical of Bukele's governance have low credibility among Salvadorans. A 2021 survey conducted by a local university revealed that less than 15 percent trusted the investigative newspaper, El Faro, despite it receiving multiple journalism awards. Also, less than 30 percent trusted La Prensa Grafica and El Diario de Hoy, two of the oldest newspapers in the country. These are the principal media outlets that have been reporting on Bukele's alleged negotiation with gangs and corruption cases.

Support for the president's political party, New Ideas, has also declined. In May 2021, it had a 49.6 percent political preference; but, at the end of 2021, it had fallen to 27.7 percent. This drop could affect Bukele's approval in 2022; however, with strong mediatic support, a lack of trust in critical media, and a weak political opposition, Bukele could maintain a high approval rating in 2022 as president.