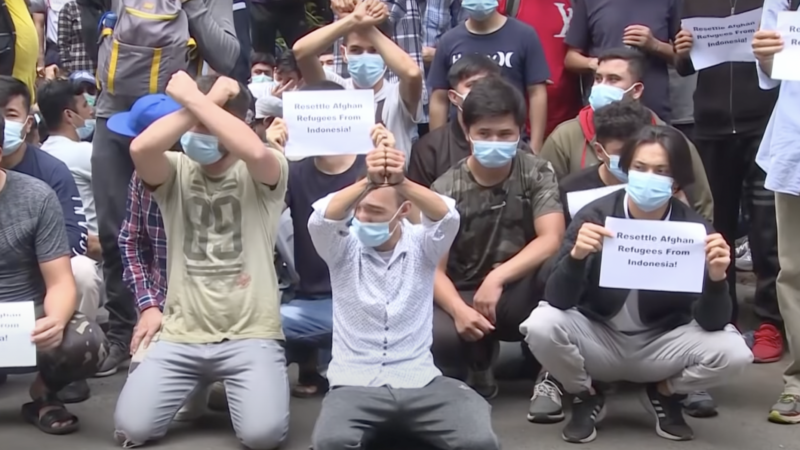 Afgan refugees in Indoneisa have been meeting to protest perceived inaction from the UNHCR. Refugees are calling for either Indonesian citizenship, or resettlement elsewhere. Image via YouTube.

A peaceful protest of Afghan refugees was violently broken up by police on January 17 in Pekanbaru, Indonesia, a city on the island of Sumatra. The refugees were attempting to draw international attention to their years of displacement, mistreatment, and neglect by the Indonesian government and the international community. Police dispersed the protest by beating attendees and striking them with batons. Several attendees were reportedly injured.

The protest emerged outside of the United Nations High Commissioner for Refugees office because an Afghan refugee community member committed suicide on January 16. They were the 15th person to die from suicide in the community. Veronica Koman, an Amnesty International representative tweeted a video of the clash [content notice: some viewers may find the following video disturbing]:

Dozens of Afghan refugees were subjected to violence during forced dispersal by Indonesian police today (17/1/22) in Pekanbaru.

They were protesting in front of the @UNHCRIndo office following the suicide of an Afghan refugee yesterday.

They are all desperate for resettlement. pic.twitter.com/NiLhZctoAR

Some Afghan refugees have been living in limbo in Indonesia for over a decade, waiting to either receive citizenship from the Indonesian government or get approval and documents to move to another country.

Mohammad Juma Mohseni was forced to leave Afghanistan in 2011 and has been living in Indonesia for nearly a decade. He told Gandhara news, a branch of Radio Free Europe, “[Fifteen] people have committed suicide and 10 have been prevented from committing suicide.” He added, “neither Indonesia nor the UNHCR has had a positive message for us.”

The Indonesian government is not party to the 1951 UN Convention Relating to the Status of Refugees or the 1967 protocol intended to eliminate restrictions on who can be considered a refugee. It does not have any official asylum laws and delegates all oversight to the UNHCR office and the International Organization for Migration (IOM). There are over 13,700 Afghani refugees in Indonesia who have been there for over 10 years.

According to the SUAKA, an Indonesian civil society organization for refugee rights, asylum seekers in Indonesia are not permitted to work, receive social benefits from the Government of Indonesia, ​​own a car or motorbike, travel outside city limits, or go to university.

The IOM covers basic living costs while they await repatriation or resettlement. Some Afghan refugees in Indonesia have been camping outside of the UNHCR building for months. Screenshot courtesy of YouTube.

Monday’s incident is the latest in a number of heartbreaking incidents in recent months as Afghan refugees desperately try to call attention to their plight in Indonesia. Some refugees have been continuously camping out outside UNHCR offices waiting for news about their resettlement and attempting to raise awareness about their situations.

A group of Afghan refugees staged a 24-hour protest outside the IOM office in Medanon on November 30, 2021. One attendee, Ahmad Shah, 22, set himself on fire in front of the building. He had been in Indonesia awaiting permanent resettlement, separated from his family and loved ones, and unable to leave the country since 2016.

He suffered third-degree burns and was reportedly taken to a nearby private hospital until he was moved to a public one on the same day.

UNHCR Indonesia spokesperson Dwi Prafitria Juma told The Jakarta Post the agency was “deeply concerned about” and investigating the incident.

“This is the seventh person we saved who was experiencing undue stress and fighting depression from living in limbo for around seven years,” said Juma in a press conference in front of the UNHCR office.

In recent months numerous refugees in Indonesia have sewn their mouths shut as a form of civil disobedience and protest.

In an interview with the Voice of America news agency the founder of Solidarity Indoenisa for Refugees (SIR), Ali Yusef, explained that Indonesia's refugees feel forced to take such extreme measures because they feel silenced and unheard. He worries for their mental health and urged UNHCR representatives to take immediate action.

The facts on the ground are that the UNHCR is less responsive to the fate of refugees in Indonesia. The proof is that they are not able to communicate with UNHCR when they want. … Don't let their delay mean the refugees who are sewing their mouths can injure themselves or even take their own lives. In the name of humanity UNHCR, please meet them. Explain that UNHCR is looking for a solution for them.

He added, “The world will judge Indonesia to be indifferent to international citizens.”

Both the UNHCR and IOM are responsible for managing refugees in Indonesia until they can be moved to another more permanent location. Both have been accused of neglecting and mishandling refugee affairs in the past.

Before the Taliban came to power in August 2021, Indonesia housed the fourth-largest number of Afghan refugees in the world — behind Iran, Pakistan, and India. Most of these refugees intended to stop in Indonesia only temporarily until they could reach Australia. However, in 2013, Australia closed its borders to refugees and asylum seekers. Many were left stateless and stranded in Indonesia without recourse.

The situation has worsened since Kabul fell in August 2021. Experts say the situation in Afghanistan is likely exasperating feelings of helplessness that many Afghan refugees already deal with. It has also crushed their slim hopes of potentially returning to their home country and made it even more unlikely they will get rehoused, due to added influx of new refugees who have fled the Taliban.

Additionally, many countries have lowered the number of refugees they accept in recent years, and during the COVID-19 pandemic, the number of resettled refugees has reached a 20-year low, according to the UNHCR. The organization found that 160 countries had closed their borders at some point during the pandemic in 2020, with 99 states making no exceptions for people seeking protection.

As a result, many refugees are finding it impossible to relocate to a third country or attain stability.

For years, refugee advocacy organizations have been calling for improved conditions in Indonesia, though those calls have not received much traction. In the meantime, citizens are doing what they can and using the hashtag #HelpRefugees_Indonesia on Twitter and social media, as a rallying call to support refugees.

Freedom and a peaceful life are the right of refugees in Indonesia#HelpRefugees_Indonesia pic.twitter.com/L3JV8onO5t

Their most basic fundamental rights, which are emphasized in international instruments such as the Universal Declaration of Human Rights, are systematically infringed on a daily basis. Their freedom of movement, education, employment, and political and social rights have been ignored. These people have been forgotten and the world has turned a blind eye to their crisis.