Djokovic deported, but many refugees and asylum seekers remain imprisoned 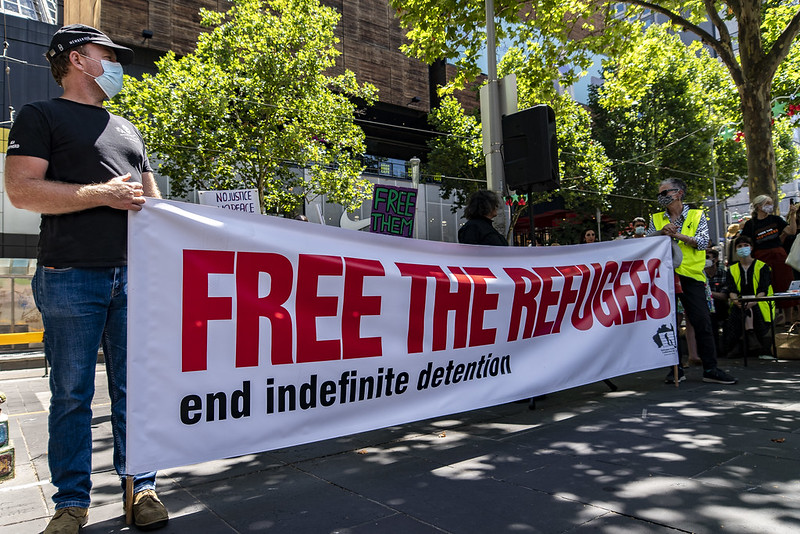 A rally led by the Refugee Action Collective, calling for the release of refugees currently being detained in Park Hotel, Carlton. Flickr photo by Matt Hrkac, (CC BY 2.0)

Australia’s refugees and asylum seekers highlighted their struggle for justice by comparing their situation with Serbian tennis star Novak Djokovic who arrived in Melbourne on January 5 but was prevented from entering the country after his visa was canceled by immigration authorities.

Djokovic refused to be vaccinated against COVID-19 but he got a medical exemption to allow him to play at the Australian Open. Australia requires vaccination in order to enter the country. After his visa was canceled, he was placed in the same hotel where 25 refugees and 7 asylum seekers have been indefinitely detained. He pleaded his case in court but in the end, he lost his appeal and was deported from Australia on January 16. The Immigration minister Alex Hawke had made his decision based on Djokovic ‘being a risk to “civil unrest” and a “talisman of anti-vaccination sentiment”’.

Australia has a complex history regarding its treatment of refugees and asylum seekers.

For much of its recent history, Australia accepted refugees for resettlement, with over 800,000 refugees and displaced persons settling in Australia since 1945, according to the Federal Parliamentary Library.

Each year, the Australian government usually allocates around 14,000 places to refugees and others with humanitarian needs.

The main difference between an asylum seeker and a refugee is that asylum seekers are people seeking international protection whose claims for refugee status have not yet been determined.

Nevertheless, a refugee may still not have been granted a visa, in which case they may face indefinite detention.

Since July 2013 anyone arriving in Australia by boat without a valid visa has not been eligible for asylum. Many have been held in offshore detention centres in Nauru or Papua New Guinea. Many have also been turned away and sent to Indonesia. Some of these people have been settled in other countries such as the United States or returned to their country of origin, whilst others have been brought to Australia for medical attention.

In addition, as the Refugee Council of Australia explains:

…detention is mandatory for those without a valid visa. It is also indefinite, and there is no independent review.

…Australian law requires that a person should be detained until they are granted a visa or leave the country.

They may be detained in a prison-like detention centre or in community detention.

Several refugees were able to draw attention to their plight because of the public mania over the Djokovic case.

Reaction from refugee communities in Australia

Mehdi Ali, an Iranian refugee, is disappointed that interviewers want to know more about Djokovic than refugees like him who have been in detention over the past nine years.

It's so sad that so many journalists contacted me yesterday to ask me about Djokovic. I've been in a cage for 9 years, I turn 24 today, and all you want to talk to me about is that.

Pretending to care by asking me how I am and then straight away asking questions about Djokovic.

He posted a photo featuring fellow refugees carrying banners about the number of years they have been seeking asylum in Australia:

This photo speaks for itself.. pic.twitter.com/nQnVBoKBT6

Adnan Choopani, a refugee from southwest Iran, called out the government's double standard and said that some citizens are more equal than others in Australia.

All animals are equal,but some animals are more equal than others”.
32refugees hold 3years in hotel detention no access to the basic rights. my wish since when I was 15 In detention until now they call me by my name instead detainee or ANA–023.#Djokovic

He was also curious to know if the Australian Border Force (ABF) is treating Djokovic with respect:

I'm just wondering did ABF handcuff Djokovic or hold his arms? remember rules are rules.
ABF handcuffs me and @MehdiAli98, with 2 officers grabbing us at any appointments we go to.
Rules are not for everyone in Australia! #only15

During a protest, refugees demanded access to basic human rights which had been denied to them. Mohammed Joy, a refugee from Bangladesh, tweeted their demands and said he is grateful to Australians who have been pushing for the recognition and protection of the rights of refugees. In this video he talks about the plight of refugees while addressing a crowd in front of the hotel:

When the Djokovic saga ends tomorrow, one way or another, the spotlight will move on.

And they’ll still be inside those rooms, crying out for help.

Former refugees, Mostafa Azimitabar also weighed in on the issue and urged the public to learn more about how Australia is treating refugees and asylum seekers:

The whole world is watching as Novak Djokovic is detained at Park hotel prison. As a refugee I was imprisoned there, & refugees are still imprisoned there in tiny rooms without fresh air. No one deserves this. Let’s not forget the people that will remain long after Novak leaves.

Journalist and award-winning writer Behrouz Boochani, an Iranian-Kurdish refugee who was detained in Australia’s immigration detention center for six years before his release in 2019, compared the situation of refugees with what Djokovic experienced in Australia:

The difference between refugees and @DjokerNole goes beyond the length of their detentions. The asymmetry extends to the fact that Djokovic is able to defend himself in court and refugees are not; they are totally failed by the judicial system.

While Djokovic has a safe, comfortable life to return to, refugees who flee their homes only to be deported- are doubly persecuted. They cannot return safely. This is what it means to be a refugee.

A further furore emerged after the court's decision, when Prime Minister Scott Morrison tied to muddy the already troubled waters:

How can the PM of this country not know that most of the detainees being held in cruel conditions at the park hotel are genuine refugees? Not asylum seekers. We have totally lost our moral compass. https://t.co/CrZYNQ8Hoj

Djokovic is already in Serbia, but the campaign for the rights of refugees continues in Australia. He has not yet made any statement of support for the refugees in the detention hotel, despite many calls for him to do so.