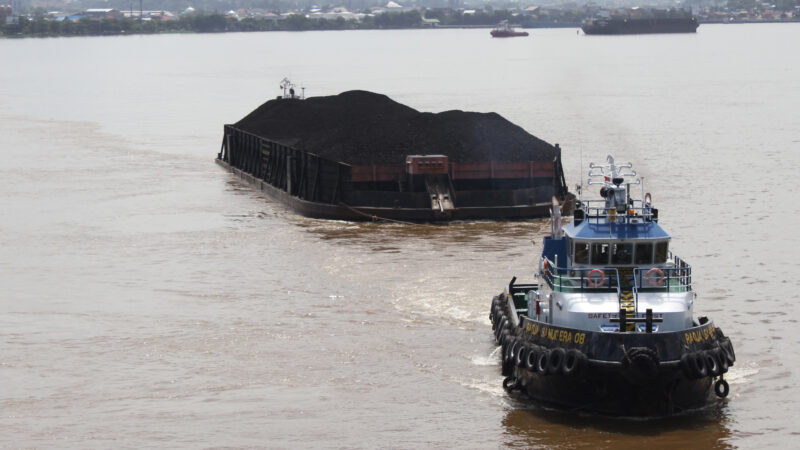 A coal barge off the coast of Kalimantan, Indonesia. Courtesy of Andrew Taylor. Used via (CC BY 2.0)

Coal prices have shot up around the world this month after Indonesia — the fourth biggest coal producer in the world — temporarily banned coal exports from January 1 to January 31 after domestic stockpiles at the state-owned PT Perusahaan Listrik Negara (PLN) power plants fell to critically low levels. By December 31, the PLN had less than 1 percent of the coal it needed this month, according to officials from Indonesia's Ministry of Energy and Mineral Resources. Without the ban, islands including Java and Bali may have faced widespread power loss and blackouts, according to Ridwan Jamaludin, the ministry’s director general for coal.

The announcement immediately caused a global spike in coal prices and left China, the world’s largest coal importer, in a temporary lurch.

Immediately following the ban, Indonesia’s domestic coal suppliers rushed to restock the PLN. Mining companies and advocates have been pressuring the government to lift the ban, with the Indonesian Coal Mining Association (ICMA) saying in a statement the policy was “taken hastily without being discussed with business players.”

This is the fifth time in the last 15 years that Indonesia has had to institute a coal export ban due to domestic shortfalls. All coal mining companies in Indonesia are required to reserve 25 percent of their coal supply for domestic sale as part of the 2009 “domestic market obligation” (DMO) policy.

Through the DMO, domestic coal prices in Indonesia are capped at USD 70 per ton — less than half the current global market rate of USD 154 — in order to protect consumers from price fluctuations in the international market.

When the DMO was first introduced, the market price for a ton of coal was around USD 55, meaning Indonesian coal manufacturers were raking in cash by selling locally. However, as prices rose in 2021, hitting a record high of USD 270, in October 2021, companies began to shirk their domestic responsibilities and put all their supply toward the international market, ignoring their 25 percent mandate. This caused the critical coal shortage.

In August 2021, 34 coal mining companies were prohibited from exporting coal after failing to meet their DMO.

President Joko Widodo (Jokowi) took a hard line with coal companies. “This is an absolute rule that must not be violated for any reason,” he said in a statement on January 3, reported Tempo, “If necessary, not only do we refuse to issue export permits but also revoke their business licenses.”

Meanwhile, since the export ban was introduced, coal companies’ bottom lines have been hit hard. With over 100 ships loaded with coal stalled out in the Kalimantan bay, awaiting export, the companies are shedding money. Coal representatives have been pressuring the Jokowi government to lift the ban, with some claiming that Indonesia could miss out on up to USD 3 billion due to the export ban. They have also demanded that the government lift the cap and pay international prices for the coal.

As of January 8th, Indonesia’s coal supply has somewhat stabilized. Jokowi has since eased the ban and allowed 37 ships to deliver coal internationally on January 15 and a total of 67 ships are expected to depart this week. Officials will not fully lift the ban until January 31.

The ban and subsequent price jump have put pressure on economies throughout Asia. So far officials from Japan, South Korea, China, Malaysia, and the Philippines have all called on Jakarta to lift the export ban.

Indonesia exports about 75 percent of its annual coal yield to Asia — 54 percent of which goes to China, its largest export destination.

As China’s relations with the US and Australia have soured, China implemented an unofficial ban on coal imports from Australia in 2020. Since the ban went into effect, Beijing mobilized its own domestic coal miners, which temporarily stabilized the market and added an influx of supply to drive its behemoth economy. It also turned to neighboring Russia to help subsidize its energy needs. As of mid-January, China’s coal looming shortage had “basically been solved” according to state-run media outlets.

Since the ban was eased on January 15, 35 vessels have docked in China and two in Japan. But even with the easing restrictions, Kazuhiro Ikebe, the chairman of the Federation of Electric Power Companies, Japan (FEPC) said in a press conference that they expect prices will continue to rise until the ban is lifted. “As Indonesia is a major coal exporter, there will be a certain amount of upward pressure on coal prices, though it depends on how quickly things return to normal.”

Once the ban is officially lifted, experts predict a sharp drop in coal prices and an overflow of coal onto the market, said a Beijing-based coal trader in an interview with Reuters.

“It is almost certain that we would see oversupply and a coal price plunge soon if the domestic output boom continues.”

Because of its dependence on coal, Indonesia is threatened with an electricity crisis in early 2022. The reason is that coal companies do not comply with the mandatory domestic supply (DMO) provisions, so the government has temporarily banned coal exports.

During the November 2021 COP26 conference, Indonesian President Joko Widodo (Jokowi) pledged to phase out coal by the 2040s and to decommission a quarter of the nation's coal mines by 2030. Indonesia currently powers 60 percent of its energy grid through coal each year. 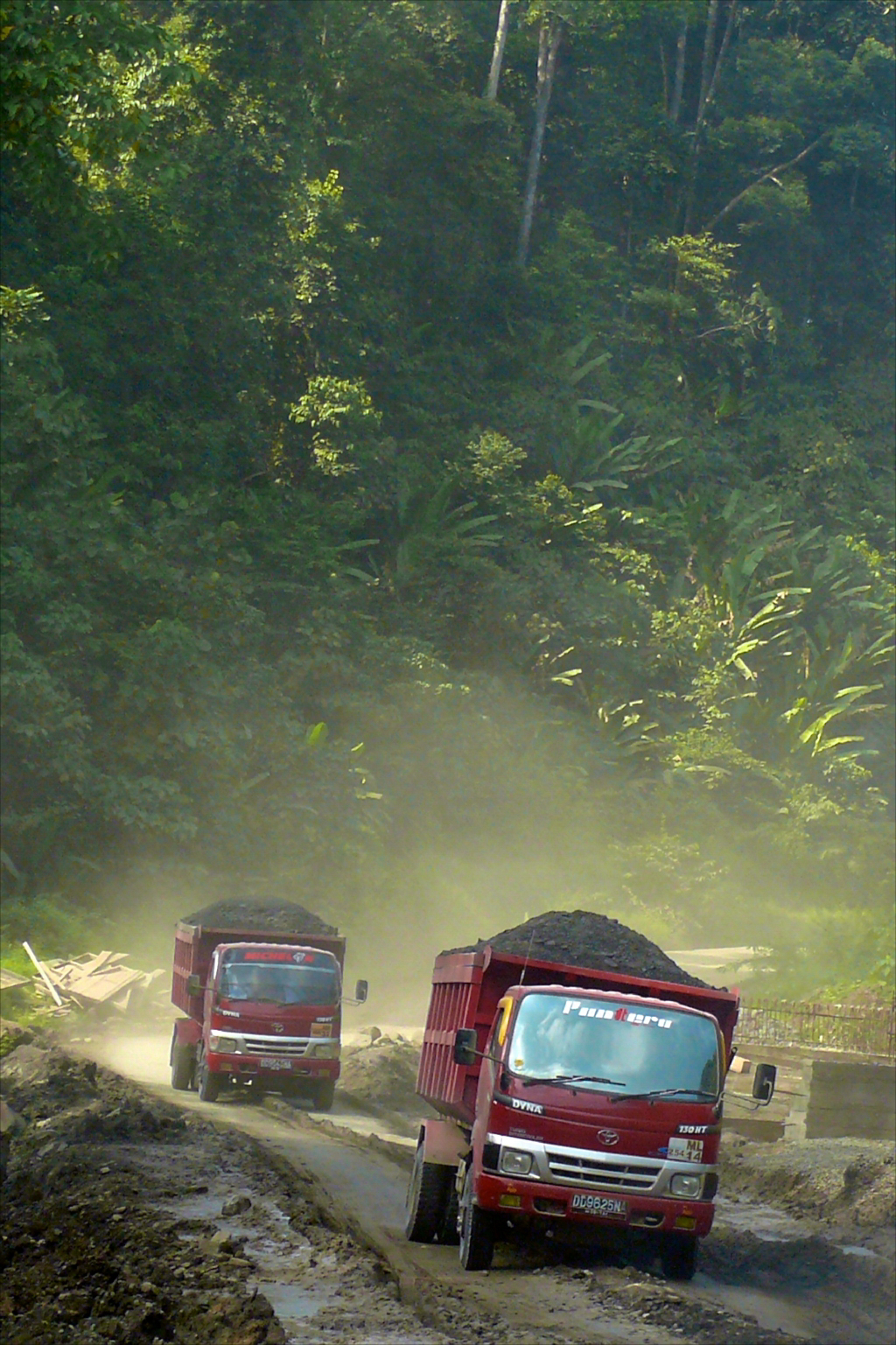 Trucks transport coal through a forest in East Kalimantan, Indonesia. Photo by Michael Padmanaba at CIFOR used via (CC BY-NC-ND 2.0)

Five of Indonesia's largest coal mines are based in Kalimantan on the island of Borneo. The region is one of the most biodiverse on earth and is severely threatened by environmental destruction wrought by mines and the deforestation required to build them.

Meanwhile, China is the world’s largest producer, consumer, and importer of coal. China’s President Xi Jinping has pledged to reach net-zero emissions by 2060 and will begin reducing its coal usage in 2026. China has funded numerous energy and infrastructure projects in Indonesia, including coal and green energy plants, through its belt road initiative to support continued mining and trade.

Kevin Tu, a Beijing-based non-resident fellow at Columbia University’s Center on Global Energy Policy, warned that as international natural energy sources become more scarce, China may pull back on its previous environmental commitments and bolster its domestic coal production and supply, noting, “Beijing has deep concerns about its energy security.”

“Because of the rising anxiety over security, including energy security, China is expected to be a little bit more cautious regarding further upgrading its climate commitments.”