A self-help group can become self-sufficient within four months 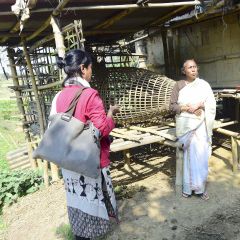 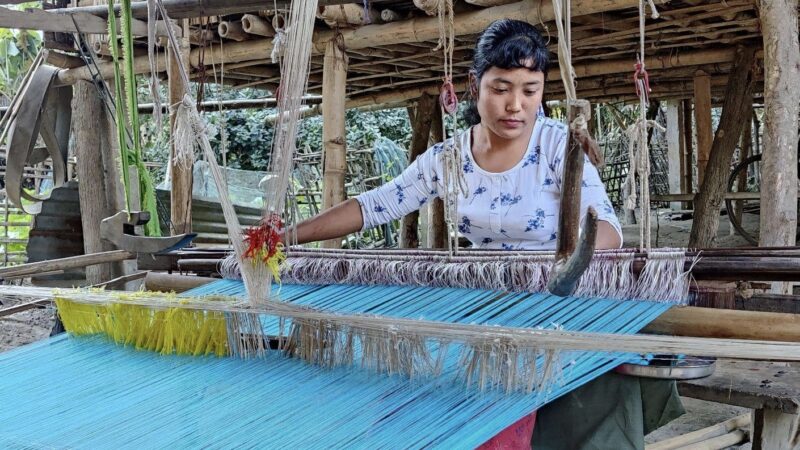 The interviews of the characters in the story were conducted in-person as a part of the field research between October–December 2021.

The northeast state of Assam has been more impacted by climate change than nearly any other place in India. Women across 210 villages in Assam have created a network of self-help groups to promote traditional skills such as weaving and gardening to supplement their family income during the COVID-19 pandemic.

Priyanka Pegu weaves an intricately designed purple chador (scarf) in the covered backyard of her home. Her nimble fingers deftly interlace multi-hued yarns, amidst the clatter of her wooden loom and the tapping of her feet. And what she churns out is a visual treat of colour and eye-catching motifs.

She is not formally trained and the loom she works on is more than 70 years old. “Weaving comes naturally to us, the skill being traditionally passed on by our mothers and grandmothers,” says Priyanka from Bholukaguri village in Golaghat district of Assam.

Until recently, her loom lay unused and dusty.

National studies have determined Assam is the most vulnerable to the destructive impacts of climate change among the twelve Indian states in the Himalayan region. Erratic rains, flash floods and erosion have chipped away at traditional livelihoods in the region, such as agriculture and fishing. Since March 2020, this uncertainty around their livelihoods has worsened due to repeated surges of the COVID pandemic.

These factors have compelled women such as Priyanka to leave their homes for the nearest cities in search of daily wage work to support their families. 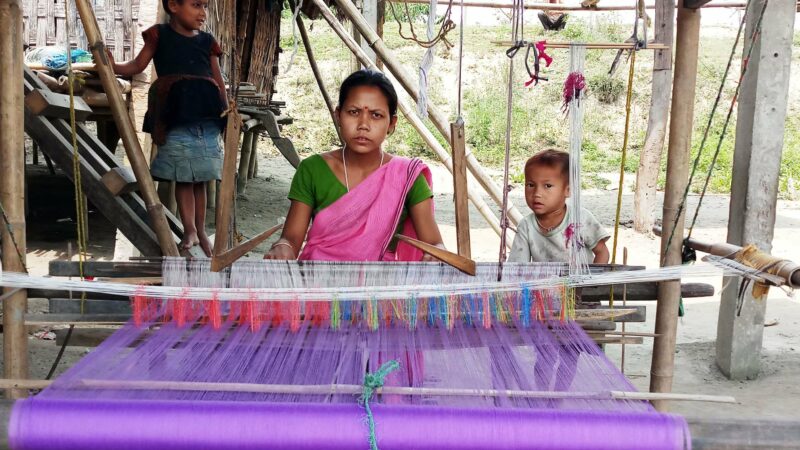 Priyanka Pegu from Bholukaguri village weaves a Mekhla chador (scarf) in the backyard of her home. Image Credit: NEADS. Used with permission.

“To cope with such unpredictable crises, we have been reviving the traditionally acquired weaving skill of our women folks to make it a sustainable source of their livelihood,” says Jamini Payeng from Assam’s Majuli district. She is the 2015 recipient of the Shanta Prasad Award for Excellence in Handloom Weaving, given by the Crafts Council of India.

For the past two decades, her women’s initiative, the Rural Economy Development Society (REDS), together with grass-root based non-profit North East Area Affected Development Society (NEADS) has organised about 6,000 women into weaving self-help groups in the districts of Majuli, Golaghat and Jorhat.

According to Jamini, their initial aim was to support women who had been impacted by erosion and flooding to supplement their family income, without having to leave their homes. But over the last two years, it has also helped sustain families during COVID and the economic slowdown.

Today there are 200 self-help groups (SHG) of weaver women across 210 villages selected based on their vulnerability to climate impacts, according to Ibhimni Singh, the Coordinator, Livelihood Restoration for NEADS. 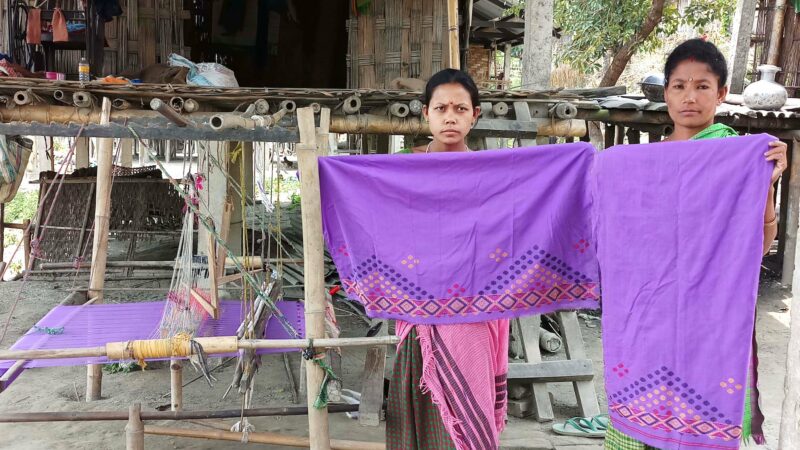 The Finished products created by Priyanka are being displayed by her group members from Bholukaguri village. Image credit: NEADS. Used with permission.

Each self-help group has about 30 members. As start-up support, NEADS provides 90 kilos of yarn to a group, with each woman receiving three to five kilos depending on their output. Jamini and her associates from REDS initially mentor them on the latest market trends in color combinations, designs, motifs, etc. to make their outputs marketable.

“Three kilos of yarn can make three to four Mekhla chador [a traditional Assamese dress resembling a long skirt and stole],” says Ranu Doley the head of the Birangona SHG in Bonkuwal Balichapori village in Golaghat. It takes her seven to ten days to weave a set, with each fetching between INR 2,000 (USD 27)  to INR 3,000 (USD 44), depending on the designs.

To enable them to earn a fair price for their products, NEADS has linked the SHGs to Women weavers’ cooperative groups. Jamini also provides marketing support through an outlet in her home village of Kamlabari, where their products are displayed and sold. Majuli is a popular tourist destination that attracts buyers from across the country. 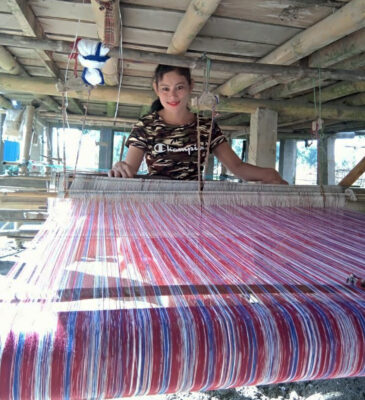 According to Ranu, each member on average manages to weave three to five sets in a month, devoting about three to four hours per day. Part of the earnings of each member is pooled together in a bank account opened in the name of the respective group. This money is used to buy yarn and may even be used to take out bank loans in the future.

“This way, a group becomes self-sufficient within about three to four months and we move on to our next selected village,” says Ibhimni.

The sweet fruits of their labour

In 2019, Rupali Morang along with a dozen other women from their Morangaon village in Assam’s Jorhat district pooled together 0.5 hectares of land, to work out a unique concept — developing a “Nutri garden,” comprising multi-colored beds of diverse fruits and vegetables. For instance, red and orange beds would contain tomatoes, carrots and papayas; then brinjal and onion would be in a purple bed; and green beds would contained cucumber, gourds, spinach, broccoli, limes, etc. 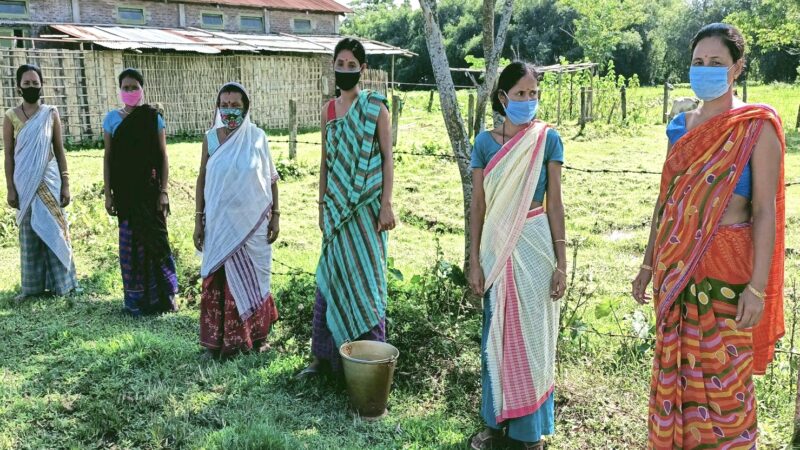 A Self help group of women photographed near their community garden in Morangaon village in Jorhat during COVID times. Image credit: NEADS. Used with permission.

These gardens, according to Rupali, were initially targeted to fulfil the health needs of expecting and lactating mothers and malnourished children in the villages. However, little did they know then, that they would be able to savour their sweet fruits of labour during the pandemic. 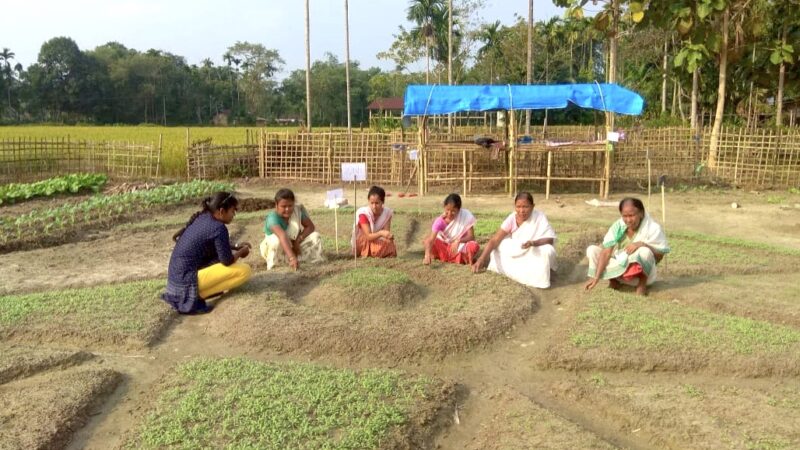 Ashaporna Borah (extreme left) discusses the setting up of a Nutri garden with a self-help group in Phesual village in Jorhat. Image credit: NEADS. Used with permission.

“Our gardens producing between 15 kilos to 18 kilos of various fruits and vegetables daily saves us from pushing through crowded markets to get our daily needs during the COVID crisis,” says Moni Doley, another villager.

They also sell off their surplus to other villagers. Today nearly 400 families from across 40 villages have worked together to create these community gardens, through seed and sapling exchanges.

Some families are also collectively growing patches of “cultivated wilderness” with medicinal plants. According to a folk healer and village elder Jyotirmoy Doley from Nikori village of Golaghat district, such plants come in handy to treat fevers, body aches, coughs and colds with a decoction prepared from its fresh leaves.

“One major way to stay protected from COVID is to have a strong immunity system,” says Dr. Jahanara Khanam, an Ayurvedic medicine practitioner in the Government-run health centre in Dhula village of Assam’s Darrang district. She has been treating corona patients with herbal medicines.

According to her, traditional medicinal plants are rich in antioxidants and have multiple therapeutic properties and nutrients. “So why visit a hospital when there’s a herbal dispensary in your backyard?”