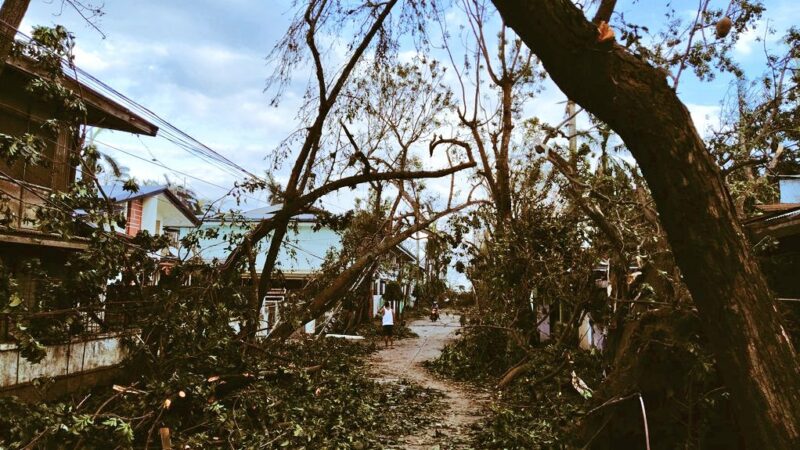 The prolonged aftermath of Typhoon Rai (local name Odette) highlights the Rodrigo Duterte government’s sluggish response to the storm, which wreaked havoc across the Visayan Islands and parts of Mindanao in the Southern Philippines on December 16, 2021.

Affected communities and local governments have been appealing for help after the typhoon-ravaged agricultural zones across Samar, Leyte, Bohol, Cebu, and Negros Islands and even overwhelmed Cebu City, a major commercial and cultural hub in the Visayas-Mindanao regions.

From @paghimutad: With 14confirmed deaths, Bais City has become an area most affected by Typhoon #OdettePH in Negros Oriental. Roads inaccessible due to the destruction the storm left in its wake have made relief efforts difficult. pic.twitter.com/2fN96XSKnO

Typhoon Rai destroyed thousands of homes while the damage to agriculture, infrastructure, and other properties displaced people’s livelihoods and left many more without electricity, internet connectivity, or access to water.

IN PHOTOS: Super Typhoon #OdettePH displaced an estimated 33,000 out of 35,000 residents of Trinidad, Bohol, LGU confirms. These are some of the houses of the members of the Trinidad-Talibon Integrated Farmers Association (TTIFA) in Brgy. San Vicente. (1/3)

Initial relief goods and other assistance gathered by Balsa Mindanao and Sisters Association in Mindanao arrived in Surigao City on Christmas Day. Thank you to all volunteers and those who donated for this relief mission.

Yet Duterte and his officials have failed to respond to the crisis, using excuses such as depleted governmental funds, media underreporting, and impassable roads to deflect blame for the government’s delayed disaster response and garner public sympathy.

The impending arrival of Typhoon Rai did not merit any public statement from President Duterte.

When the president spoke in a televised government briefing a day after the typhoon amid calls for immediate government response, he claimed he was still looking for funds to assist typhoon survivors as the government’s money had been “depleted” because of the pandemic:

This COVID really emptied our coffers. So we’re trying to screen how much we can raise so that we can marshal it to the areas affected.

On December 22, Duterte announced that he would be directing USD 199 million (PHP 10 billion) for typhoon relief. Yet his budget department would not commit to expediting the funds to provide immediate assistance to affected areas.

Duterte’s claim of “depleted” funds was challenged by left-wing opposition legislators who pointed out that the Philippines was, in fact, the biggest borrower from the World Bank in 2021. Bayan Muna (People First Party) chairperson Neri Colmenares commented:

The country has a history of being ravaged by typhoons, and it should have the budget to mitigate and provide immediate relief even while responding to the pandemic.

Later that week, on December 27, Duterte would draw criticism for suggesting the government should use the relief funds to purchase “trapal” or tarpaulin sheets as temporary shelters for typhoon survivors.

He's the President. Why can't I demand for something better than trapal especially since more than a week na dumaan dito sa amin si Odette? This is an exact quote. It's not taken out of context. The President literally said bili tayo ng trapal 2 weeks after Odette hit the PH

He’s the president. Why can’t I demand for something better than tarpaulin sheets especially since more than a week has passed since Odette? This is an exact quote. It’s not taken out of context. The President literally said let’s buy trapal 2 weeks after Odette hit the Philippines.

Indeed, for many Filipinos, Typhoon Rai’s aftermath once more highlighted the Duterte government’s lack of adequate disaster preparedness and delayed response that had been the subject of scathing public criticism in the past.

Kara Ahorro, a resident of world-renowned surfing paradise Siargao Island, shared that before the storm, she felt confident that Typhoon Rai would not be as strong as Typhoon Haiyan (local name Yolanda) in 2013, in an interview with SunStar news:

It was forecasted to be just 150 kph at its peak, We were here during Yolanda and that was 300 plus kph, though Yolanda did not made landfall in Siargao, we just thought ‘ah, kaya lang’ [we can handle it].

The economic impact has been especially dire on Siargao Island, where resort and business owners had been prepping to open for visitors again after coronavirus travel restrictions were eased during the Christmas holidays.

Speaking to the Guardian, marketing coordinator Elka Requinta shares how the strength of Typhoon Rai caught everyone by surprise in Siargao:

We didn’t expect it to be this bad. You have locals who were hit because I don’t think there was a call for any evacuation from the government.

But a top Duterte official, Presidential Assistant for the Visayas Michael Dino, blamed the national media for the slow disaster response, claiming they failed to adequately report about the typhoon beforehand.

Journalists pushed back on these accusations, noting the constant steam of coverage in the aftermath of the typhoon amidst great challenges, as Rappler’s Head of Regions Inday Espina-Varona underlines:

From Siargao and Dinagat in Mindanao, Silago, Sipalay, and Ubay in the Visayas, all the way to Palawan, officials and residents waded for hours through mud and water, inching their way through on motorcycles, bangkas, and on foot, just to get their first scratchy messages out into the world. Media reported that.

Ironically, government itself now controls the most extensive regional media network after it denied ABS-CBN, the country’s biggest broadcast network, the right to operate in 2020: