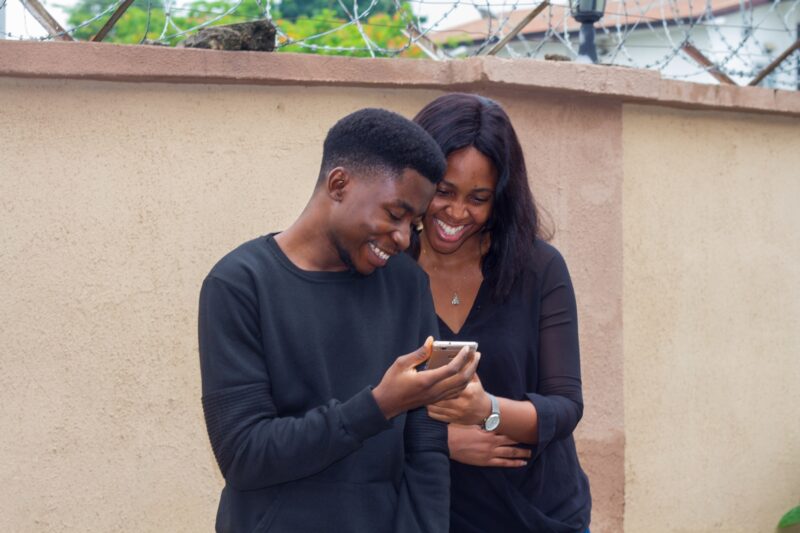 Two young Nigerians smile as they read from their smartphones. Image by iamdavidrotimi via Iwaria, Oct. 5, 2021. Free to use. No attribution required (CC0)

On Jan. 13, the Nigerian government lifted the suspension of Twitter, ending a seven-month embargo of the microblogging site in Africa’s most populous nation. However, it appears that the lifting of the Twitter suspension came with a rolling back of freedom of expression, as demanded by the government and with the acquiescence of the tech company.

The reinstatement came after Twitter “agreed to meet all the conditions” made by the Nigerian government, according to a statement by Kashifu Inuwa Abdullahi, the government’s lead in the Nigeria-Twitter negotiations. The conditions included Twitter’s legal registration in Nigeria, the payment of taxes, and the agreement to abide by Nigerian law to manage prohibited content.

Did Twitter throw Nigeria's digital rights under the bus?

The tech company has neither denied nor confirmed the deal with the Nigerian government that led to Twitter’s unblocking in the country. Rather, the company tweeted an evasive diplomatic statement stating that their mission in the country is “to serve the public conversation.” The tech company, while keeping silent about the specifics of the agreement with the Nigerian government, emphasized that they are “deeply committed to Nigeria.”

This tweet is evasive. @Twitter has to specifically address the claim of FGN (Federal Government of Nigeria) that agreement on access right to your backend (to delete citizens’ tweets) has been reached. Address this and stop being evasive https://t.co/zLRUOUVFb5

Media reports supported the Nigerian government's version of events that the government did not back off from the fight against Twitter without gaining some concessions from the tech company. Rather, Twitter agreed to the conditions made by the government, which will further clamp down on Nigeria’s citizens’ digital rights.

On Jan. 13, a report by the BBC stated that it “understands” that Twitter “has largely agreed to the government demands.” Similarly, journalists Abubakar Idris and Peter Guest of Rest of the World affirmed that “Twitter had agreed to all of the government’s demands in November 2021.” However, government bureaucracy delayed the announcement until January.

It remains to be seen the effect of Twitter's deal with Nigeria in these three areas: legal registration in Nigeria, taxation, and co-management of prohibited content according to Nigerian laws.

Specifically, Twitter has enrolled the Nigerian government in both its Partner Support Panel (PSP) and Law Enforcement Portals (LEP). These two “taken together” were described by government negotiator Abdullahi as “a comprehensive compliance apparatus.”

The PSP is Twitter’s dedicated reporting channel for the tech company’s global partner organizations that allows the organizations to rapidly report suspected violations of Twitter community rules directly to the company. As of July 2019, Twitter had over 80 European Union partners — election monitoring or research organizations, universities, and academics — on the PSP. Hence, Nigeria’s inclusion on the PSP is not so unique.

A repeat of India squeeze or Russia’s throttling of Twitter?

In the past, Twitter has struggled to adequately protect and stand up for the digital rights and freedom of speech of its users, especially in countries with a form of digital authoritarianism.

In India, even though Twitter promised to defend freedom of speech, it took down accounts that belonged to media organizations, journalists, and activists. The tech company, at the request of the Indian government, removed more than 500 accounts, including accounts from journalists and media outlets, for protesting against the Indian Prime Minister’s policies that affected Indian farmers. In a similar incident, Twitter succumbed to requests from the government of Russia and removed about 60 percent of specific tweets “banned” in Russia, after the government slowed down the speed of Twitter’s services in the country.

Twitter vaguely agreeing to the Nigerian government’s request, via Twitter’s Law Enforcement Platform, to take action against content its suspects violates the country’s laws, is certainly worrying and affects the democratic framework of Nigeria. Nigeria’s journalist Tola Owoyele fears that this deal grants the government “a degree of access to Twitter, such that tweets that are deemed unpalatable or unfriendly to the government can be monitored and filtered. This would enable the government [to] track down Twitter users.”

The final call on account information and content removal requests remains with the tech company. But in practice, considering Twitter's compliance with the Indian and Russian government's demands, a similar occurrence in Nigeria is most probable.

This Nigerian government has consistently worked to stifle citizens’ ability to use online platforms to participate in governance. In 2019, the Nigerian government proposed a controversial social media bill that legalizes internet blackout and criminalizes any criticism of the official narrative.

With the Nigerian government’s temperamental past, the violation of citizens’ online freedom of expression will be much easier because Twitter is now a company registered under Nigerian laws and taxable in the country. In addition, this agreement made between Twitter and the government, without any civil society organization involvement, gives the Nigerian government enormous power to control the social media platform.