The Facebook page they run receives messages from several Balkans women every day. 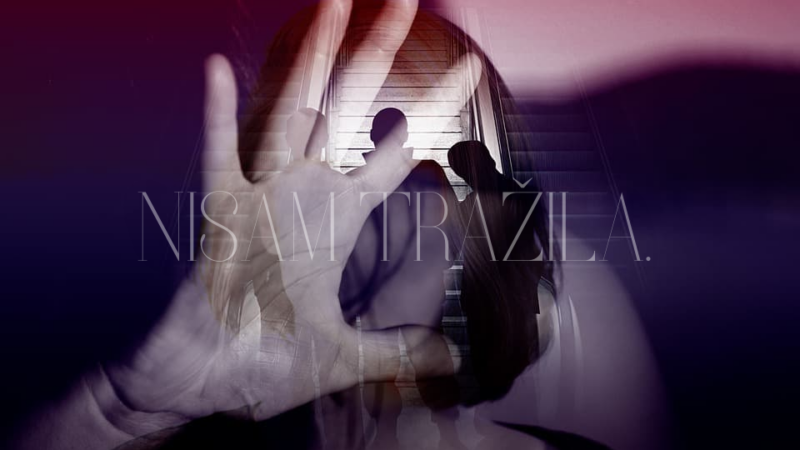 Illustration based on photo by Pixabay user Geralt, used with permision based on Pixabay license.

This article by Samira Trešnjo was originally published on Balkan Diskurs, a project of the Post-Conflict Research Center (PCRC). An edited version is republished by Global Voices as part of a content-sharing agreement.

When the four women started talking and sharing their private experiences, they concluded that each of them had been in at least one situation in which they were victims of sexual abuse. They decided to launch the Facebook page Nisam tražila at three o'clock in the morning on January 18, 2021.

Ana Tikvić, one of the leaders of the initiative, recalled in a statement for Balkan Diskurs:

“That Facebook page is just proof that victims have more confidence on an anonymous Facebook page than in the system and organizations that are responsible for dealing with this problem. We received hundreds and hundreds of messages in the first few days. Victims are not ready to report sexual abuse because they do not trust the system, because they do not feel protected, and because they do not think that would solve anything. They don’t trust that the perpetrator would be properly punished, that they will eventually be protected and get justice and at least a little peace that they absolutely deserve.”

She points out that it was a very stressful time for them because they began the page spontaneously without thinking about how it could escalate.

“At some point, we really thought, ‘what do we need this for?’ and then a person messaged us and said, ‘You encouraged me, I feel better, I decided to report my abuser.’ These kinds of messages gave us strength — if we even help one woman, everything is absolutely worth it.”

Since then, the initiative has garnered support across the region of former Yugoslavia, from women and men alike.

For instance, after their page popularized the hashtag #NisiSama (“[Woman,] you are not alone”), the Bosnian band Bombaj Štampa released the eponymous song “Nisi sama” made in cooperation with Serbian rock star Bajaga as expression of support for the movement.

The four young women from the campaign continue publishing cases of violence against women on their Facebook page and post reactions to injustice daily.

“It was interesting how surprised everyone was and how much they see the rape of this actress as an isolated case — but these things are happening to a much greater extent than we think. Of course, rape is somehow the last degree of sexual abuse and the most extreme, but there are many levels of sexual abuse and harassment that lead to that last most heinous act.” 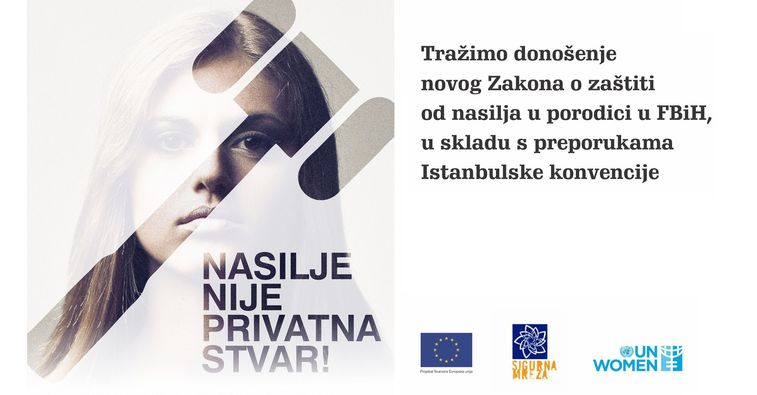 Social media graphics from the UN Women campaign “Violence is not a private matter.” The text reads “We demand enactment of a new Law on Protection from Domestic Violence in the Federation of Bosnia and Herzegovina in line with the recommendations of the Istanbul Convention.”

UN Women in Bosnia and Herzegovina, initiated the public campaign “Violence is not a private matter,” emphasizing that half of all women and girls over the age of 15 in BiH have experienced serious violence, most often at home, and that the perpetrator is almost always a man. All this becomes a serious problem because there is no adequate psychological help for victims of violence.

“There is no legally regulated form of psychological help that a person can receive when reporting sexual violence. Many organizations provide free legal and psychological advice, but again, nothing is regulated at the state level. Our Facebook page has about 40,000 followers, and we also have a closed group on FB that has about 13,000 members where people continue to write about their experiences with sexual abuse. Finally, at least a space has been created, even if it’s only online, where a person can really write about what bothers them without being judged by others.”

Tikvić explained, emphasizing that they report every form of discrimination shared on their website.

Apart from the citizens of BiH, the initiative was supported by numerous politicians and public figures, but, as she says, that is not enough for change.

However, to fight against violence, the violence itself must be reported, which often does not happen due to societal pressure and patriarchal norms in our society. Tikvić added:

“We live in an extremely patriarchal environment where the word of a man is still the law and the absolute truth, and women are, of course, afraid of society’s condemnation — whether someone will believe them, what the first neighbor will say. Unfortunately, we still live in such an environment where it is not a man’s shame, but, in the end, a woman’s shame.”

However, the four activists who run the platform do not have enough power to protect other women because they are neither the police nor the court. They consider those who receive a salary for this type of work responsible for finding a solution to the problem and changing the law. Tikvić demands accountability from competent institutions:

“Ultimately, it is the state authorities and institutions that must protect the people who contact them. So, they have had a duty to do that for years, but unfortunately, it has not been done yet. We as an organization constantly make calls to action and warn others about these issues, but that’s it. I think that we must unite and that we mustn’t stop talking about it.”

She is pleased that their initiative has encouraged a regional public discourse on sexual abuse.