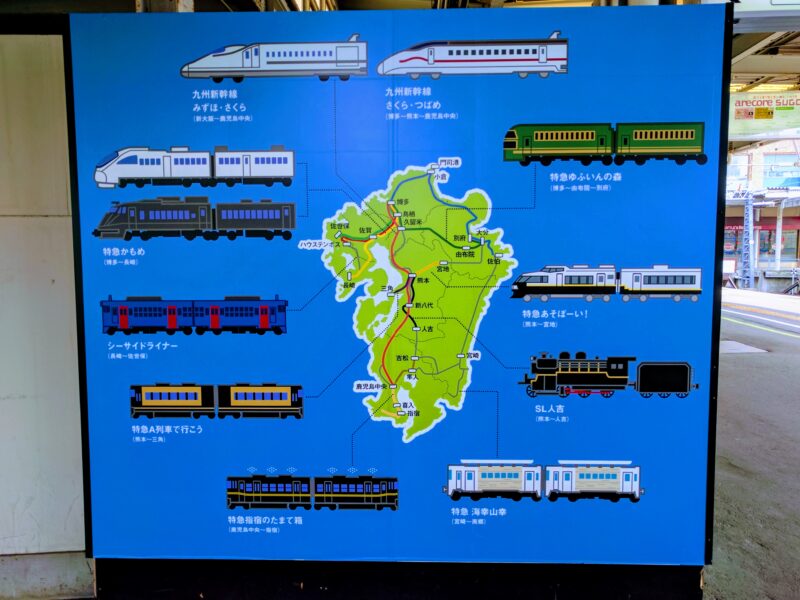 Map of Kyushu's JR rail network from 2017. The new West Kyushu shinkansen route, which partially links the western city of Nagasaki with the rest of island's high-speed rail network, is not pictured. Photo by Nevin Thompson. Image license: Attribution 3.0 Unported (CC BY 3.0)  [1]

In early January, devoted railfans in western Japan welcomed the country's newest bullet train (known in Japan as the shinkansen, or super express). As spectators lined up to catch a glimpse of the new N700S [2] train cars as they left the factory, others questioned the utility of the new West Kyushu shinkansen line itself, which remains only partially completed.

The N700S’s rolling stock (train cars) already travel on the Sanyo and Tokaido shinkansen lines that connect Fukuoka and Kyushu island in western Japan with Tokyo about 1,000 km to the east, at speeds of up to 300 km/h. The train will travel at 265 km/h [2] on the new West Kyushu route.

The new train cars were manufactured by engineering giant Hitachi at its facility in Kudamatsu, Yamaguchi, on the western end of the island of Honshu, north-east of Kyushu. Hitachi's Kudamatsu plant is already a major destination [5] for railfans, partly because newly completed train cars are paraded through town from the factory on their way to the port.

After the new train cars were loaded onto barges at Kudamatsu, enthusiastic trainspotters continued to track their progress through the Inland Sea and on to the neighboring island of Kyushu, and Nagasaki.

The ‘Kamome’ passing by the Hario radio transmission towers [16] in Sasebo (quite near the final destination of rail cars, at Omura, just outside the city of Nagasaki).

The new West Kyushu shinkansen route, which will connect Nagasaki with Kyushu's existing high-speed rail network, is not without controversy. When the route comes on stream sometime in fall 2022, only 66 km of track will be in service, with just three stations, according to the Asahi Shimbun [17]. A journey on the new high-speed route will last just 25 minutes before passengers will need to transfer to slower limited express trains.

The new route has nevertheless been hailed as an economic revitalization tool for Nagasaki prefecture, which is experiencing the sharpest economic decline [17] of all prefectures in Kyushu. 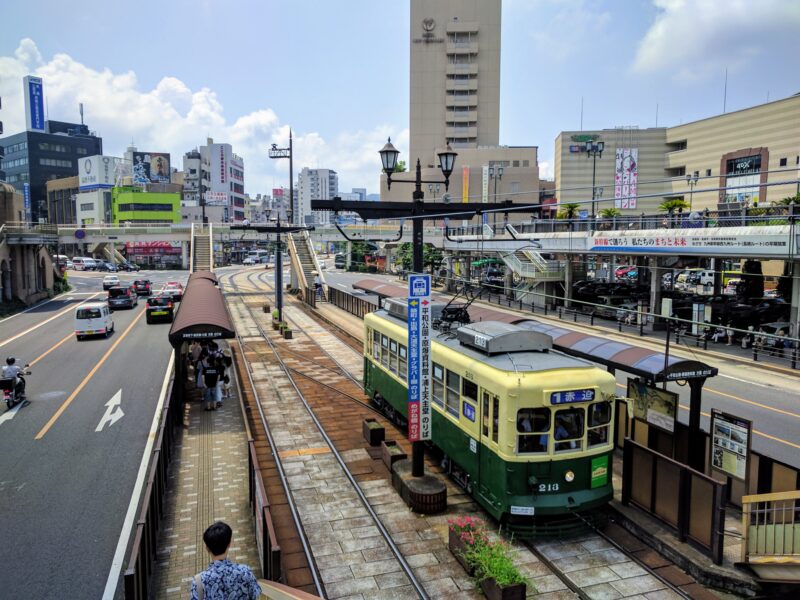 In front of JR Nagasaki Station in August 2019. The entire station complex has been demolished, and a new shinkansen station has since been built. Trams are part of the city's electric light rail network. Photo by Nevin Thompson. Image license: Attribution 3.0 Unported (CC BY 3.0)  [1]

With traditional industries such as shipbuilding being phased out, Nagasaki is pinning its hopes on increased tourism. For now, however, the new route potentially saves only 30 minutes in travel time, while increasing the number of transfers to other trains and modes of transportation.

Map of new West Kyushu shinkansen route (red line) that provides service to Nagasaki. The route is still unfinished, so travelers will need to transfer one or two times to reach Fukuoka (green line).

Currently, travelers can transfer from a super-express rail line from Fukuoka or even Tokyo to an existing limited express service that travels directly to the Nagasaki terminus.

Nevertheless, many Nagasaki residents were waiting to welcome the new train cars to Kyushu and posted their photos to Twitter and other social media platforms.

The (new) West Kyushu shinkansen ‘Kamome’ cars are passing through our neighborhood!

Suzukawa Ayako, popular YouTube vlogger and railfan, made the trip to Nagasaki from her home just outside of Tokyo to greet the new shinkansen cars.