Simple people, not terrorists, took part in the initial protests 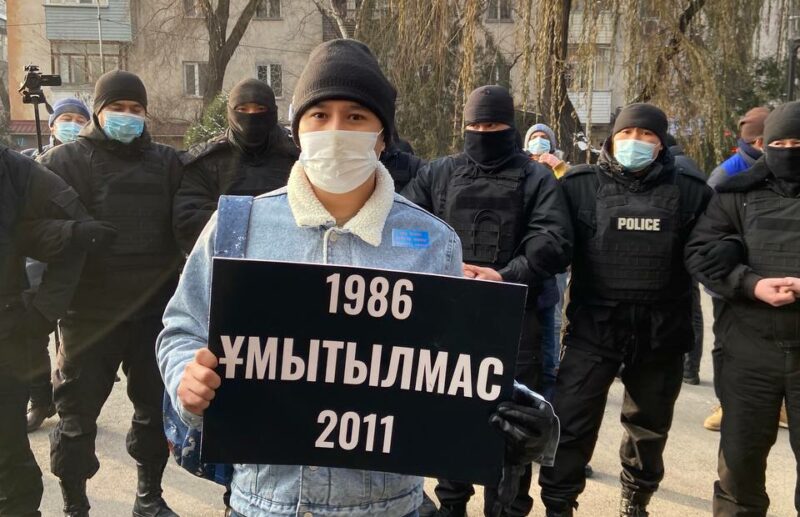 Inside a police kettling circle, Darkhan Sharipov with a placard “1986 don't forget 2011″ in relation to two historic events of state repression in Kazakhstan: “Zheltoksan” and “Zhanaozen.” Photo from Sharipov's personal archives. Used with permission.

The internet works again after a blackout of five days in Almaty, theater of the bloodiest urban clashes in  Kazakhstan's history. Activists are thus back online trying to make their voices heard, posting their accounts of the days of protests that shook the country and the days of violence that frightened Almaty.

Global Voices spoke to Darkhan Sharipov, an activist of the youth group Oyan, Qazaqstan! (Kazakh for “Wake up, Kazakhstan!” henceforth just Oyan), which was born in 2019 after the resignation of long-time President Nursultan Nazarbayev. For almost three years since its formation, Oyan organized demonstrations, civil rights walks (in defiance of the restrictive regulations on peaceful assembly), and art performances of protest. 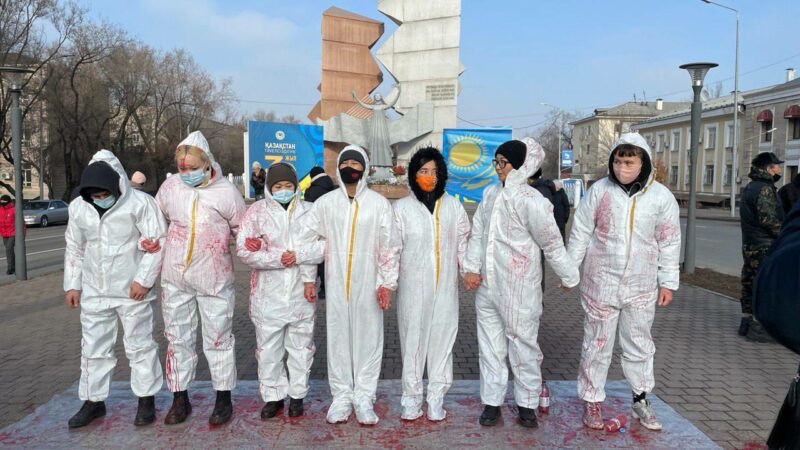 On 16 December 2021, Oyan activists performed as peaceful targets of a bloody repression, mourning the 10th anniversary since the police shootings in Zhanaozen, an oil town in the west of the country. Photo from Sharipov's archives. Used with permission.

After the January protest rallies, which were hijacked by violent groups, Oyan activists were targeted as the instigators of the riots. “It's clear to all that Oyan Qazaqstan and the unregistered Democratic Party of [Zhanbolat] Mamai were the accomplices of the terrorists and looters,” said Marat Shibutov, a political analyst close to the country's leadership, in his Telegram channel.

Oyan activists reject this claim as baseless and possibly driven by Shibutov's political agenda against them, especially given that Shibutov was not on the streets with them.

During his January 7 address to the nation, President Kassym-Jomart Tokayev accused civil activists of abusing the freedoms they were given.

Some so called “defenders of human rights” and “activists” put themselves above the law and believe that they have the right to gather where they want and say what they want.

While Tokayev didn't name names, it was clear that Oyan was among those targeted by his words.

During a phone interview, Sharipov, a 32-year-old accountant living in Almaty, explained how they gathered in peaceful rallies, how they were met by strong police resistance, and how they witnessed the destruction of Almaty from the sidelines.

GV: Let's go in order. On January 4, Oyan activists were rallying along the streets of Almaty.

Sharipov: Yes, we wanted to show our solidarity with the people of Zhanaozen, who came out in protest the days before for the increase of the price of fuel. We remembered what happened the last time there was a mass protest in that city: in 2011, the state ordered the shooting of unarmed citizens; we did not want that to repeat. We first gathered in the Park of the First President [in the south-western part of the city] and walked north. We started with a few dozen, and we were joined by hundreds of people as we walked. On the other side of the city, at Almaty Arena, members of Oyan joined another peaceful rally, which directed the crowd to the city center. The city was already cordoned off with hundreds, maybe thousands of police forces.

GV: You were chanting “Oyan, Qazaqstan!” and voicing your political demands. How did the police react?

Sharipov: We have our own political demands, which we have expressed for the past three years in all our actions. We want reforms, a multi-party system, and a parliamentary republic. After a long walk, the first crowd was met by special security forces, which stopped us and dragged us into their vans. Eighteen of our members were among the detained people that were transferred to a nearby police station. Our activists then went to the station to request the release of our comrades. Those who were taken in for questioning were treated fairly respectfully. Finally, at 3 a.m. we were told that we could only be released if we left our phones in the station for the night. The police understood that the demonstrators in the protest were communicating via Telegram, WhatsApp, and Instagram, and the crowds were growing. We agreed and left our phones, moving to join our second group, in the city center. The tension there was higher, as the police was pushing back against the demonstrators.

GV: The peaceful protest of January 4 transformed into a riot on January 5. How did this happen?

Sharipov: We went back to the Republic Square in the city center on January 5, late in the morning. We found a different crowd. The akimat [the city government building] was already in flames. Three fire trucks appeared, but with people draped with Kazakh flags on the top. The crowd followed them. Then a tractor appeared, directed to the presidential residence, not too far from the burning akimat. The crowd had pushed back against the police. There were already shootings, we saw wounded people in a pool of blood.

Sharipov: We left the square. The chaos was unbearable and we were scared. The following day, other activists rallied peacefully with banners begging the police not to shoot. “We are simple people. We are not terrorists!!!” but bullets were flying. At this point we had nothing to do with the protest.

GV: Once the internet connection came back a few days later you found yourself between the attacks of a political analyst and a direct attack by Tokayev, who placed the blame of the riots on activists, as well as on human rights advocates and journalists. What do you think will happen next?

Sharipov: Our activism won't stop for sure. We heard the accusations and reject them. We have never broken the law since our formation almost three years ago. Tokayev's speech has already had consequences: journalists across the country are being detained and questioned for having reported on the protests. We are scared that they could come after us now. The authorities know us well. When I was in the square, I was spotted because I had a red jacket. They knew who I was.

For us, now, the goal is to continue being active and try to be even more transparent about our objectives and vocal in our rejection of violence. We don't know what is happening to the elites and to the system itself. But we don't expect our lives to become easier.