There is still only a trickle of commuters moving on spokes 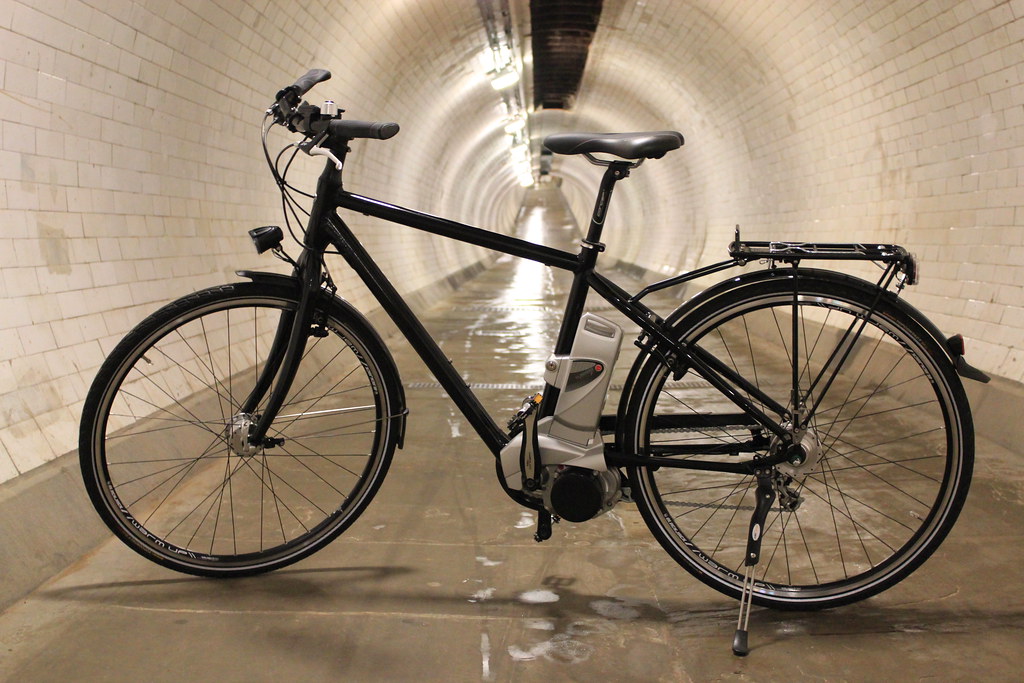 “eBike inside the Greenwich Foot Tunnel” by londoncyclist is licensed under CC BY 2.0

This article was first published on Investor.ge. An edited version is republished here with the permission of the original website.

After years of construction, Tbilisi is now abundant with bike paths and trails — but where are the cyclists? There is still only a trickle of commuters moving on spokes, rather than the steady flow city planners were hoping for.

One factor that could soon change this is the increasing availability of e-bikes. Bike aficionados note that Tbilisi’s many hills might be deterring potential cyclists. E-bikes could make all the difference by helping when the going gets tough.

Jeffrey Kent, the honorary consul of the Republic of Ireland, is an early e-bike adopter in Tbilisi. While his drilling work often takes him outside the city, he says that once in town, he usually leaves the car at the office and returns home by e-bike: “I mostly enjoy not being frustrated by traffic,” he says, adding that biking past card stuck in long traffic jams offers a special thrill. Jeffrey is one of several million who have taken up e-bikes around the world — no wonder the CEO of Bosch eBike Systems estimates that half the bikes sold in the EU in 2025 will have a motor, according to a report by the Financial Times.

Obstacles to e-bikes in Tbilisi

So what inhibits the uptake of e-bikes in Georgia in 2021? Some of the factors preventing their wider adoption may be about to melt away. For a few years now, premium bike shops such as Bikes.ge have offered quality e-bikes as part of their selection. Bikes.ge says they have sold 25 e-bikes in the last two years. Local availability is critical, as airlines do not permit e-bikes as sports equipment because their batteries are a fire hazard.

While e-bikes remain expensive, proponents say that their cost should be seen in the context of them replacing a car for most urban trips: half the wheels and double the fun. While midmarket e-bikes are priced at USD 2,000–4,000 (GEL 6,150–123,00), a steep cost even inside the EU, these remain more affordable than cars.

Volto Bikes, a Tbilisi-based company, converts existing bikes into e-bikes as a less expensive alternative. Used e-bikes, or budget versions with limited ranges, are available at upwards of USD 1,200 (GEL 3,690).

With such an investment, protection from theft is a major concern: “I can leave my house with a bike,” comments one cyclist, “but then I don’t know where to park it once I reach the destination and the risk of somebody just taking it away is quite big.” Here, too, some solutions are now finally making progress. Several startups have developed viable GPS trackers. Users can set an alarm to receive a notification once the bike changes its GPS position. An e-Bike battery can power a tracker for weeks and send signals via GSM/mobile phone networks. Tracker company PowUnity claims that it has assisted in the recovery of more than 160 stolen e-bikes in recent months. It is likely that once these systems catch on in Georgia, a few bike thieves will be surprised to find their pursuers so close on their heels.

The tracking systems don’t, however, solve the overall difficulties of parking the e-bike. Due to the heavy battery and engine, many mid-range models weigh more than the luggage limit of even generous airlines. Add in some shopping, and the weight becomes a major challenge for upper-level apartment dwellers.

There will be a need for new urban solutions. With video cameras, locking stations, and possibly even electrical charging, e-bike owners may well become enthusiastic clients for underground parking. London has pioneered neighborhood bike hangars, which replace street-side car parks and can house six bikes at a time, with yearly rental fees offsetting the municipal subsidy. The hangars are locked, in addition to the bike lock, giving extra protection also from the elements.

Bike lifts are another potential solution. In this popular storage solution, bikes are lifted out of reach,  under a balcony, for example.

Environmental and safety sides to e-biking

Sustainability is a key feature of e-bikes. Some studies have suggested that cycling could have ten times the positive impact towards reaching net-zero than a comprehensive switch to electric cars. While e-bikes need to charge, one Tesla could power an entire fleet of them. 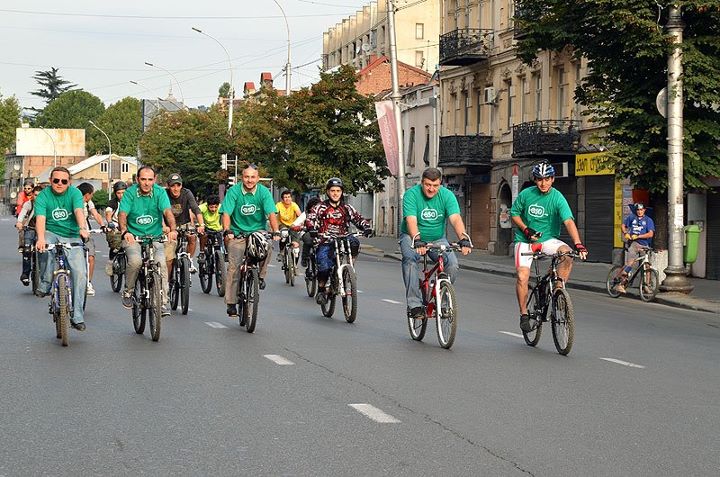 Yet the parking conundrum illustrates that increasing cycling in Tbilisi requires more than just an infrastructure boost. Many still see the roads as too fraught, despite the many new bike paths. Vakho, a local student, says that he “thought about cycling as a way to get past the terrible Tbilisi traffic, especially on big crowded streets. But I can’t do it because the roads are too dangerous.”

Reducing speeding and reckless driving is essential to make more space for more vulnerable bikers. Here, too, the actions of a few hundred or thousand men (and it’s almost exclusively men) with misdirected testosterone greatly constrain what everyone else can do and enjoy in the country. There is still a long way to go (and a few extra-reckless drivers to be removed from the road) before many parents will be comfortable strapping their children onto a Cargo e-Bike to wheel them to school.

For safety reasons, too, it would make sense for Georgia to adopt regulations similar to those in many other countries: bikes that offer assistance up to a maximum of 25 km/h are free to use. Faster bikes, with assistance up to 45 km/h, require registration, insurance, and a helmet.

For many in Georgia, another basic building block is missing: “I would never cycle because I do not know how. They [parents] never taught me,” says Iva. Another student comments that while they cycle in their village, they don’t think they have enough practice to navigate mean city streets.

Social contagion is likely to lead to dynamic change. “I don’t have anyone to cycle with,” a student said. Bringing a friend out to bike, and showing them safe paths to cycle, may thus be one of the single best ways Tbilisi’s cyclists can help people switch. The Caucasus Cycling Network, a group of cycling enthusiasts, regularly organizes community rides, with increasing popularity.

With regards to taking safe paths, e-bikes could be a game-changer. There are many back roads in Tbilisi, some of them with potholes that make them thoroughly unattractive for anyone in a low-seated BMW. Douglas Morris and other local cyclists created a detailed map showing such paths, available here. These scenic back alleys could indeed contribute to a greater flow of cyclists, but they often require that bit of extra uphill muscle. As the old adage goes, “sweat saves blood,” and now, that friendly e-bike motor can take care of the sweat, too.