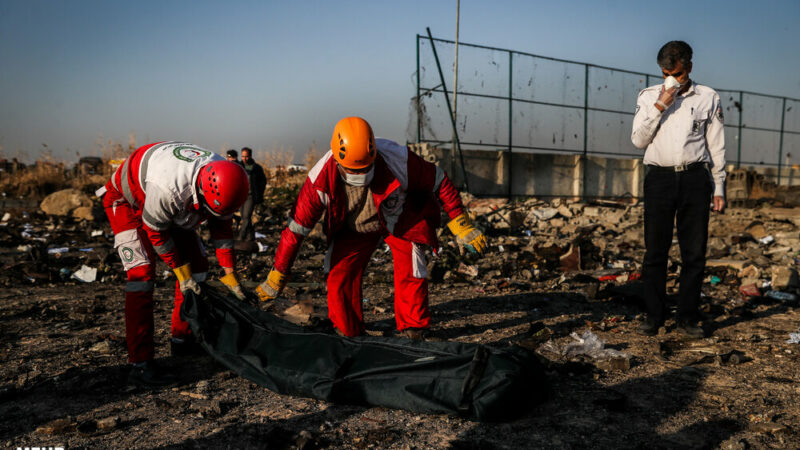 All 176 passengers aboard Ukraine airline's flight 752 were killed. Image used under the Creative Commons Attribution 4.0 International.

Iranians on January 8 commemorated the second anniversary of the shooting down of Ukrainian Airlines Flight PS752,  with slogans such as “We demand justice” and “We demand the truth” in stands around the world and on social media.

Iran's Revolutionary Guard shot missiles at the plane only three minutes after take off from Tehran's IKA airport, killing all 176 passengers aboard. Over 100 of the Iranian victims had Canadian citizenship or residency, prompting some families of the victims to sue Iran in Canadian civil court.

The shooting down of the jet came days after a US drone strike in Iraq killed Qassem Soleimani, the commander of the Quds Force, a branch of Iran’s Islamic Revolutionary Guard Corps (IRGC). This was followed by Iranian missile attacks on a US base in Iraq. Iranian authorities initially denied being responsible for the of the attack on the civilian jetliner close to Tehran’s Imam Khomeini international airport. But, facing mounting evidence of its accountability, Iran's Armed Forces Central Command admitted on January 11 that the Revolutionary Guards had “mistakenly” shot down the passenger jet.

On April 6, 2021, Iranian authorities said 10 people were found guilty for their role in the incident but their ranks, identities, the sentences and the charges against them, were not revealed.

A few days before the second anniversary of this tragedy, a Canadian court ruled that Iran should pay about $84 million in punitive damages to families of six people with Canadian citizenship or residency.

Families of victims advocating for justice

On the second anniversary of the crash, the families of the victims commemorate their memory from Toronto to Tehran.

In Tehran's international airport, protesters chanted slogans for justice and truth. They also called for a fair trial of those responsible for the assault.

⚡ BREAKING:
Families of flight #PS752 victims gathered at Tehran Int'l Airport, where they said their last goodbyes to their loved ones two years ago. They demand JUSTICE!

There tweets were posted by the Association of PS752 Families of Victims which was formed in Canada in March 2020 with the main goal of “unit[ing] grieving families, keep[ing] the memories of the passengers alive, and most importantly seek[ing] justice. We are determined to uncover the truth and find out why a commercial flight was shot down by IRGC’s missiles.”

In Toronto, where many victims lived, their memory was honoured.

Yesterday at #AradZarei memorial at ElginMills cemetery & Today at @ps752justice event at Mel Lastman square in Toronto, I paid my respect to families of victims and lit a candle in memory of the victims of #ps752#IWillLightACandleToo #من_هم_شمعی_روشن_خواهم_کرد#PS752Justice pic.twitter.com/3yE95iEnzn

Several Iranian citizens circulated photos of victims and remembered the children who were killed in that attack on social media.

Solidarity, from artists to academics

Many artists and political activists showed their solidarity with the families of victims by sharing designs, photos, and the hashtag #IWillLightACandleToo on Twitter.

Golshifteh Farhanai, the globally renowned Iranian actress, shared a couple of posters commemorating those who died.

Dr. Faisal Moola, a forest conservation and management professor at Ontario's University of Guelph, remembers one of his Ph.D. students, Ghanimat Azhdari, who was a specialist in Geographic Information Systems (GIS), working to support the participatory documentation of territories of life.

Today is anniversary of downing #PS752 by Iran.Among victims were dozens of children & students, including my precious PhD student #GhanimatAzhdari. State sanctioned murder no different than massacre of youth at Tianamen Square, Soweto deserving of same international condemnation pic.twitter.com/M1q98rlh4w

Several Iranians criticized Iranian politicians who published posts mourning the victims of the Ukrainian airplane, such as former Minister of Information M. J. Jahromi, and Mohammad Javad Zarif, former foreign minister, calling them part of the Iranian State, covering up the attack.

Iran's Information Minister at the time of the regime's downing of Flight #PS752, tweets that “there is a knot of sorrow in [his] heart.”
Jahromi's Ministry was believed to largely be responsible for cracking down + restricting internet and flow of information inside the country. pic.twitter.com/8ct55cCAnE

‘Our patience is exhausted’

Hamed Esmaelion, spokesperson of the Association of Families of Flight PS752, whose wife and daughter were among the 176 passengers slain by Revolutionary Guard's missile, delivered a statement on 8th January:

“Our patience is exhausted. Today, is the day when diplomacy ends and justice begins.”
Statement of the Association of Families of Flight PS752 delivered by spokesperson @esmaeilion on the 2nd anniversary of the downing of flight #PS752.#ps752justice pic.twitter.com/mWhMEumnS4