Funny, mischievous, clever and confrontational, he was a man who understood his purpose 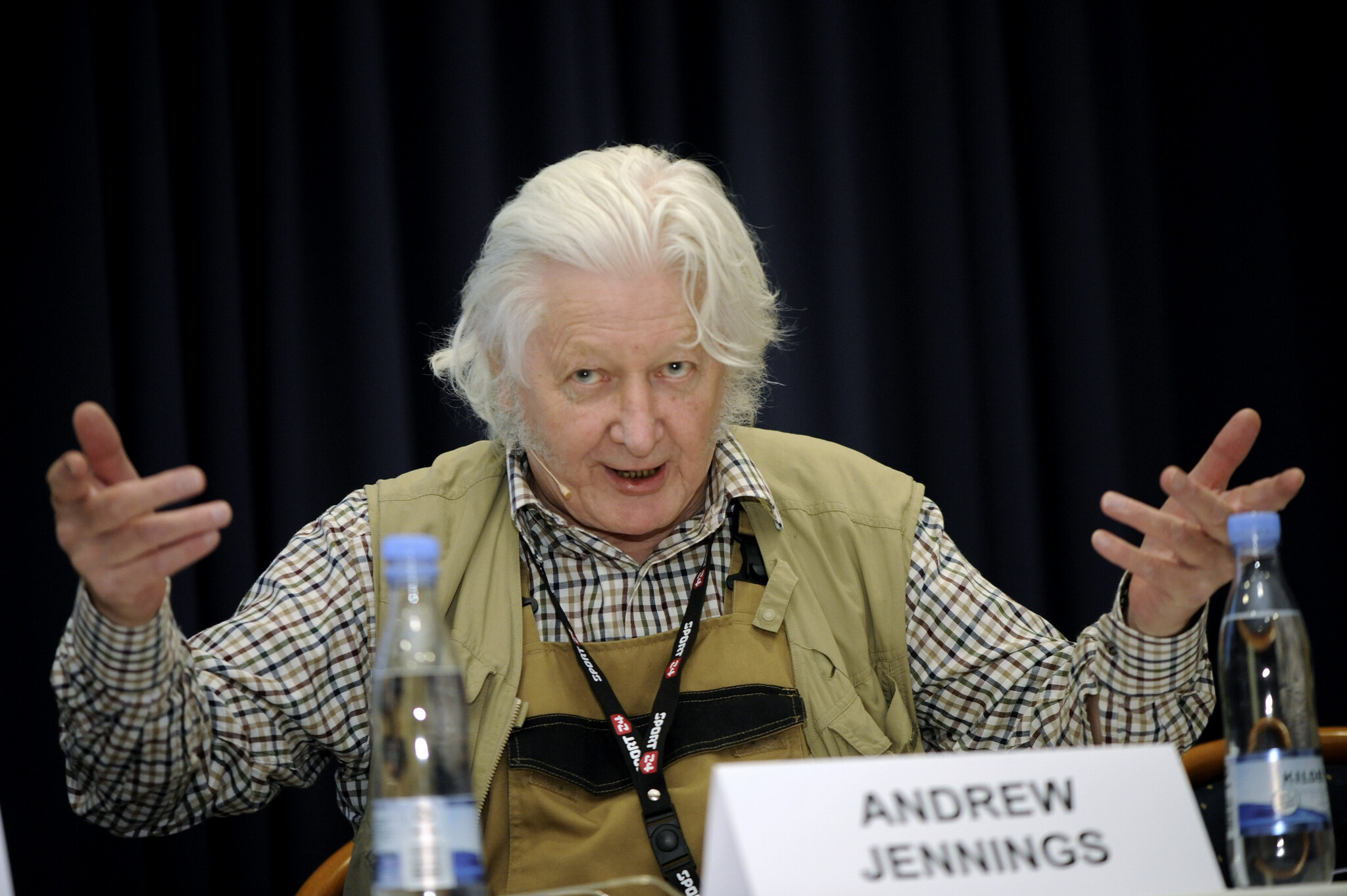 Investigative journalist Andrew Jennings on October 30, 2013, giving the presentation ‘Who wants to go to Qatar in 2022? Hands up!’ Photo by Thomas Søndergaard/Play the Game via Play the Game on Flickr, CC BY-NC-ND 2.0.

Trinidadian sports journalist Lasana Liburd pays tribute to his mentor, British investigative reporter Andrew Jennings, who died in England on January 8 following a brief illness, at the age of 78. This article was first published at Wired868. An edited version appears below with permission.

One of my most vivid memories of Andrew Jennings came on our second meeting, after a media conference at the Trinidad Hilton in the build-up to the 2001 FIFA Under-17 World Cup in Trinidad and Tobago.

It was an elegant event, attended by then FIFA president Sepp Blatter, with every local sports reporter of note present. Jennings had not yet distinguished himself in football, but he caught the attention of the room with some spicy questions to the head table during the Q&A session.

Refreshments in hand, curious local reporters surrounded the short, plump, grey-haired Brit to learn more about his mission on the island. Jennings put up with barely a few minutes of chit-chat before he leaned purposefully towards the group, as if to share a secret. Instinctively, his local “hosts” reciprocated by leaning towards him.

“Let’s get those crooked fuckers,” hissed Jennings, in a fierce whisper.

Eyebrows shot up and, to a man, everyone seemed to remember somewhere else in the room they needed to be. In less than a minute, I was the only one left in his company.

“I find it better not to waste time separating the wheat from the chaff,” he told me, with a wink and a wry smile.

It epitomised Jennings: funny, mischievous, clever and confrontational. He was a man who understood his purpose.

I’d met him a few days earlier, when he sought me out—on the recommendation of an undisclosed third party. He was investigating corruption in FIFA and, naturally, he found that there was ample evidence of it in the Caribbean. So he was searching for someone in the region he could trust.

I was 24 years old and had already been a journalist for five years. Within my first year on the job, I wrote a critical piece on the administration of the Trinidad and Tobago Football Federation (TTFF)—steered by then FIFA vice-president Jack Warner—for the Trinidad Guardian newspaper, and I never changed course.

But Jennings was something else entirely. He was an investigative journalist; and he became my mentor in that field. (His wife, Clare Sambrook, a former UK Guardian editor and author, certainly gave me some valuable writing tips, too.)

I know personally of Jennings’ interactions with Brazil striker Romário, Trinidad and Tobago goalkeeper Shaka Hislop, and West Indies batsman Sir Viv Richards. There are no doubt hundreds of others—some more illustrious, most less so—who reached out to the veteran journalist and found someone keen to empathise and make their challenges his.

A lot will be said of Jennings’ excellent work over the years. That is as it should be. His first sport book The Lords of the Rings: Power, Money and Drugs in the Modern Olympics, which he co-authored with Vyv Simson in 1992, shook up the International Olympic Committee (IOC) and was listed by the New York Times as one of the best sport reads of the century. He wrote two more books on the IOC and three on FIFA, in addition to producing dozens of documentaries and giving maybe hundreds of lectures.

Jennings zeroed in on how money meant to further the sport was funnelled away by corrupt officials; he shone a light on the way conscientious administrators, managers and coaches were bullied and purged, and athletes, fans and governments were abused and cheated.

It is hard to overstate the real value of journalism of that sort.

For the fan-in-the-street, the abiding image may well be of a feisty, grey-haired man picking fights with powerful sport officials. But Jennings could never have amassed the multitude of well-placed contacts he did without whistleblowers feeling absolutely certain that his concern about the sport was genuine and his discretion regarding their identities was unimpeachable.

For me, though, Jennings’ most important qualities were his empathy, honesty, tenaciousness and generosity.

As we collaborated for years, eventually sharing sources, I can say with complete certainty that some of the persons who trusted Jennings with inside information held very high positions within FIFA and its confederations. And they often remained his confidants for years.

There were administrators and athletes on every continent who believed in Jennings. He never took that responsibility lightly; he worked tirelessly to create a better world for them.

In Trinidad and Tobago in 2006, Warner started a narrative that Jennings was an English irritant who was trying to stir up trouble so as to unsettle the Soca Warriors before the two nations faced each other at the World Cup in Germany. I could not stop laughing at that. Jennings could barely tell the difference between Dave Beckham and Peter Crouch! He was not a football fan and knew very little about the game.

Jennings entered this field because he was challenged—and financed—to replicate his eye-raising IOC work on FIFA. His interest was solely in the moral and fiduciary responsibility of administrators to the young men and women who played “the beautiful game.” It meant that, unlike most sport reporters, Jennings could not be bribed or threatened with non-access to tournaments.

Jennings did not have many friends within the profession, but he kept those he thought were the right ones close. And, long before Facebook and the rise of social media, he created a network of investigative sport journalists across the globe that has eventually outlasted him.

During my stay in England and Scotland between 2003 and 2006, I often visited Jennings and his family for four or five days at a time on their farm in Penrith, England. This was where Jennings refuelled mentally between frequent work trips or did the bulk of his writing.

When the mood was right, we would take long walks to the Lake District or enjoy staring straight across the Pennines in the direction of Leeds and Newcastle. I remember his immense pride in having me try the organic tomatoes he grew himself. He told me how he responded when his young son, Henry, asked what he did for a living.

He had a way of stripping any matter down to its bare bones, its true essence. It was how he worked and how he lived.

One of Jennings’ most impressive tools was the “doorstep” interview, where he would seemingly materialise out of nowhere with a tricky question. He would patiently research his target, secure their potential schedule, and stake out the potential locations beforehand—like a hit man in an action movie.

Jennings converted the surprise interview into an art form. “What is just the right opening question—not too convoluted for viewers to grasp, or so simple as to be easily brushed off?” Warner, of course, was “doorstepped” by Jennings on at least three occasions. The Trinidadian’s furious responses—in particular, “go ask your mother”—became viral hits.

On learning of the great man’s passing, former Sunday Times journalist James Corbett posted this comment to a WhatsApp group of global investigative journalists: “Imagine being doorstepped by Andrew Jennings at the gates of heaven.”

Indeed. If there is any justice in the afterlife, maybe the greedy fat cats of sport have not seen the last of Jennings just yet.

Lasana Liburd is the managing director and chief editor at Wired868.com and a journalist with over 20 years’ experience at several Trinidad and Tobago and international publications, including Play the Game, World Soccer, the UK Guardian and the Trinidad Express.