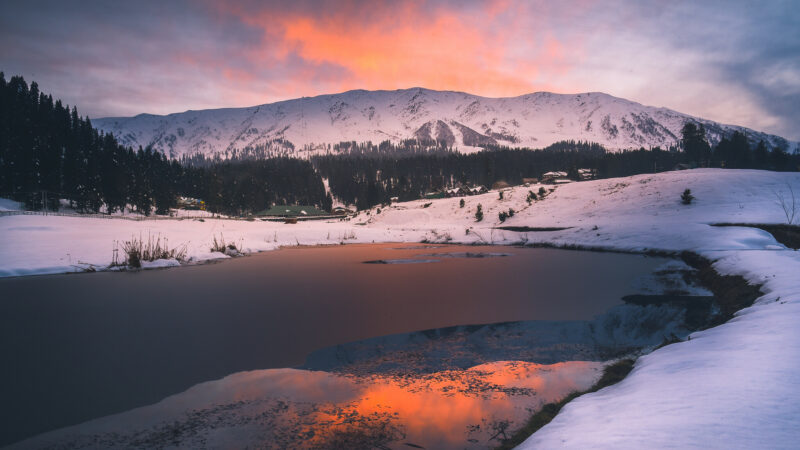 Winter Postcard from Kashmir. This is Aparwhat Peak looming large on Gulmarg valley, Kashmir. Image by Rajarshi Mitra via Flickr. CC BY 2.0.

Snow-clad mountains, scenic valleys, houses draped in white and silent puffs of falling flurries from the pale grey sky—these are glimpses of winter in northwest India's Kashmir region, as the valley experiences the 40-day winter period known as Chillai Kalan (major cold), which began on December 21.

Heavy snowfall started in early January throughout most of Kashmir, resulting in the cancellation of dozens of flights. Temperatures in many parts of Kashmir were either at or below freezing point, with certain locations recording up to minus four degrees Celsius (24.8 degrees Fahrenheit). Though Chillai Kalan can be harsh, many Twitter users have also been appreciating and sharing photographs and videos of its beauty.

Kashmiri Chillai Kalan attracts 18500 tourists since January 1st with around 3,000 in Gulmarg and 1700 in Pahalgam.https://t.co/H7fnVAAJfK@diprjk #JammuKashmir @manojsinha_ @JandKTourism

Journalist Ieshan Wani shared a video that captured the peacefulness of winter mornings:

Not everyone, however, was pleased with the amount of snow. Journalist Majid Hyderi (Jimmy) complained that the Srinagar Municipal Corporation (SMC) didn't clear the snow as expected:

In fact, Shehryar Khanum made the point that romanticising snow is a privilege:

It took me a long time to realise that romanticising snow is a privilege. Guilty. Kashmir has no infrastructure for this kind of weather. We don’t build weather friendly homes, power supply is bleak, access to roads becomes a challenge, and it just cripples daily routine.

Winter brings many challenges to local residents, as in this instance—shared by Kashmiri journalist Irfan Amin Malik—when people carried a pregnant woman on snow-covered roads:

Journalist Tabeenah Anjum also spared a thought for the region's birds, which have been having a difficult time collecting food during the heavy snowfall:

Woke up to this sheen video. Folks back home, sent me this. Slightly late, but the birds did drop in for breakfast today.

With snow everywhere, it is difficult for winged friends to find grains. Let's do our bit & place grains at accessible places 🌨️#SheenStories#Kashmir pic.twitter.com/Y2Qpy7l2c8

Nevertheless, Kashmiri student Falak Qureshi looked on the bright side:

Akhtar Ahmed also chose to show how people are enjoying the snow in Kashmir:

On January 7, the weather department sounded fresh alerts for heavy rain and snowfall, as well as possible avalanches and landslides, warning people to expect flight disruptions as a result. A landslide triggered by heavy rains has already blocked the Jammu-Srinagar highway, leaving a few thousand vehicles stranded.

According to the authorities, there is still an adequate supply of essential commodities for residents in far-off snowbound areas in the Kashmir valley, as people were given a four-month advance of food supplies. In these areas, people adhere to old customs during the winter to survive—including stocking up on sun-dried vegetables and fish.

Drying food in the sun is a safe and economical way to preserve food,
In #Kashmir sun drying of different food items for winter is an age old tradition, earlier it was done on large scale to fight the food scarcity during harsh winters. pic.twitter.com/CqWgfSIsqF