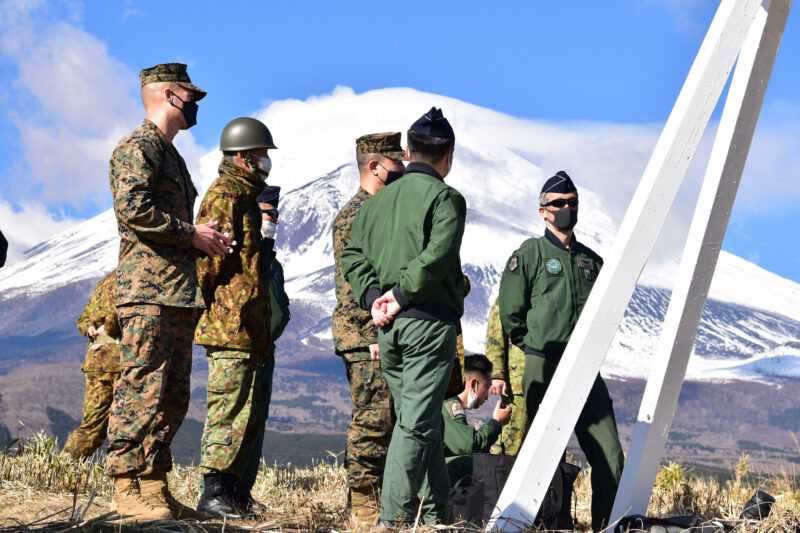 The Japanese government has declared a limited state of emergency in three prefectures after a sudden spike in COVID-19 infections during the first week of January. While there have been daily increases of COVID-19 all across Japan, there are fears American military personnel are responsible for igniting an explosive new wave of COVID-19 in the country.

Two of the prefectures, Yamaguchi in western Honshu, and Okinawa, an archipelago in Japan's far west, host extensive United States installations that have also seen sudden increases in COVID-19 over the past week. The third prefecture, Hiroshima, neighbors that of Yamaguchi and its own American military presence.

Jim Rion, a writer and translator who resides in Yamaguchi, noted the correlation between case counts and U.S. military presence in western Japan:

Can anyone spot the US military bases? https://t.co/ViaiQJaSuN

Fears of a COVID-19 outbreak sparked by U.S. military personnel began on January 3, after U.S. base commanders in Iwakuni (Yamaguchi prefecture) announced 143 new cases of COVID-19 over the previous five days. In Okinawa, there had been 235 cases reported within the U.S. military on January 1, a single-day record for the military there so far.

By January 5, more than 2,000 daily COVID-19 cases were recorded across Japan for the first time in over three months. While not linked to the country's U.S. military presence, major cities— including Tokyo and Osaka—were recording a spike in new COVID-19 cases as the week went on.

On January 6, Hiroshima, which neighbors Yamaguchi, announced 273 daily cases, the highest since late August. By January 8, Okinawa recorded more than 1,000 daily COVID-19 cases, characterized as an “explosion” by prefectural governor Tamaki Denny, who pleaded with the Japanese central government for more decisive action.

In the meantime, under Japan's quasi-state of emergency, also known as “mambo” (マンボ, or まん延防止等重点措置), restaurants and bars in the three prefectures will no longer be allowed to serve alcohol from January 9, and will be encouraged to close early in an effort to help prevent the transmission of COVID-19.

For some, Japan's “mambo” is not enough to deal with the current COVID-19 threat. Perceptions that U.S. military personnel, contractors, and their dependents generally refrain from wearing masks and abiding by other behavioral measures to help mitigate the spread of COVID-19—paired with the fact that there are at least 54,000 such personnel stationed at 85 facilities located all over Japan, not to mention 8,000 civilian and contractor employees, plus an additional 45,000 dependents—have contributed to people's concerns.

Military facilities of the United States in Japan (2016). Source: Wikimedia. Image license: Government of Japan Standard Terms of Use (Version 1.0)

There are also fears there are no COVID-19 testing or vaccination requirements for U.S. military personnel and their depedents as they are rotated into Japan on military flights.

In response to pressure from Okinawa's Tamaki and other prefectural governors, Japanese foreign minister Hayashi Yoshimasa called on U.S. commanders to impose more restrictions on the movement of military personnel to base, to help prevent the spread of COVID-19.

On January 6, U.S. Secretary of State Antony Blinken said the Biden administration would “do everything it can by working together with Tokyo to curb the spread of the virus.” However, a readout of the meeting between Blinken and Hayashi, his Japanese counterpart, does not mention COVID-19 outbreaks at U.S. bases across Japan. By the end of the week, some opposition politicians in Japan were calling for more rigorous restrictions on the U.S. military, including confining personnel to base.

Governor Tamaki of Okinawa, where daily COVID-19 cases surged to 1,400 on January 7, demanded that Japan review and update the Status of Forces Agreement, which provides a legal framework for the American military presence in the country, in order impose a mandatory quarantine on service personnel.

Under the agreement, Japanese police can exert little legal authority over U.S. personnel stationed in the country. Japan's COVID-19 measures, such as masking and social distancing, rely on voluntary compliance and shared social norms and conventions. In contrast, American military personnel stationed in host communities across the country generally follow their own rules about personal conduct, which are enforced by their own chains of command.

For some U.S. residents of Japan, including Dan Castellano, a writer and translator residing in Tokyo, the American military's perceived role in Japan's newest COVID-19 wave is a source of shame:

As an American I’m absolutely enraged from this behavior of the US military https://t.co/7a7DCpXqUY

For the time being, American military leadership in Japan has pledged to enhance COVID-19 mitigation measures by implementing new health restrictions, including masking and a mandatory negative COVID-19 test before travel to the country.