'Mas is Dance and Fight' 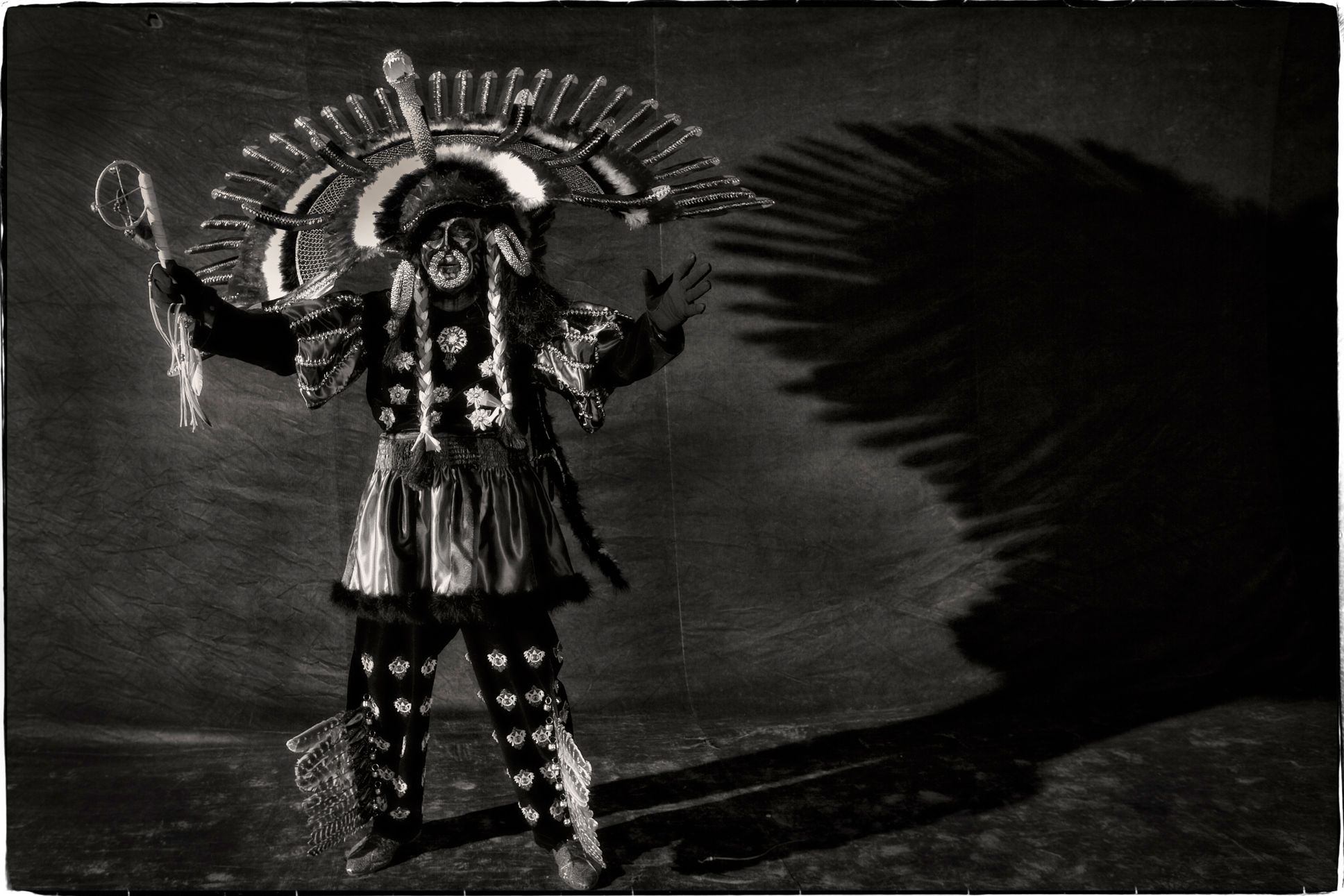 Okenaga—Black Indian culture bearer Narrie Approo at Victoria Square, Port of Spain, Trinidad, in 2009, taken by Abigail Hadeed as part of her outdoor backdrop project, through which she documented masmakers like Approo and the costumes they made. Used with permission.

To put on face paint and a costume in the context of Trinidad and Tobago Carnival—especially within the realm held by the characters of traditional mas—is to be transformed, not just physically, but mentally, emotionally and spiritually. It was a routine metamorphosis for Narrie Approo, the country's oldest “Black Indian” masquerader, who passed away at the age of 94 on the evening of January 6, leaving behind a legacy of creation and performance that is hard to match: 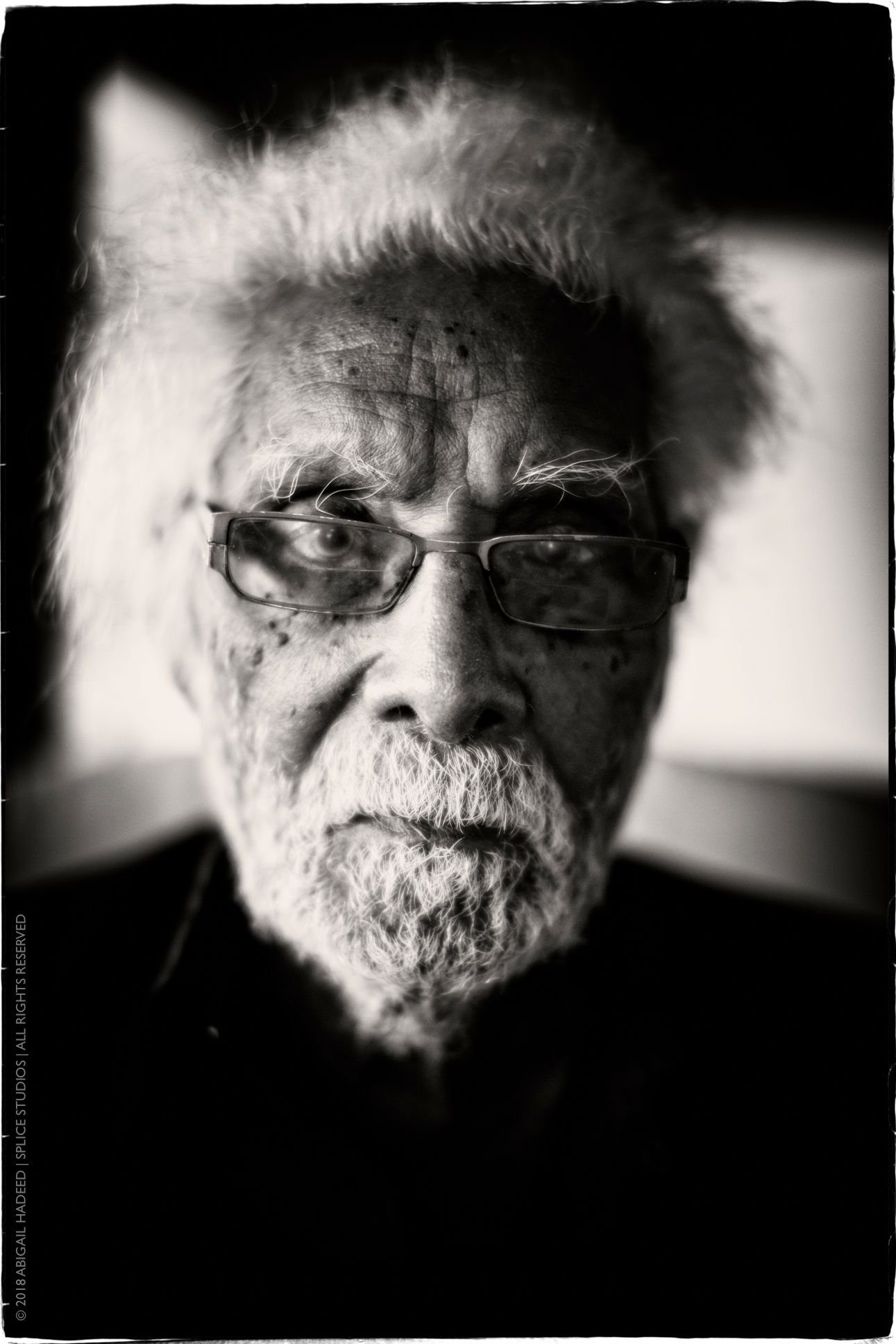 Portrait of Narrie Approo by Abigail Hadeed, used with permission.

Black Indian mas, which celebrates the many ways in which Indigenous people and Africans banded together throughout the horrors of colonisation, dates back to the 19th century. Through his annual portrayal of this tradition, Approo and his troupe, “Warriors of the Black Tribe”, did yeoman's service in preserving this unique aspect of Trinidad and Tobago's cultural heritage. As a consummate “masman,” he was also skilled at the craft of Carnival creation, making intricately beautiful costumes and papier-mâché masks, some of which are displayed at the Toco Folk Museum on Trinidad's east coast.

Writing for Caribbean Beat magazine, academic Dylan Kerrigan noted that Black Indian mas, “the fiercest of the traditional Indian masquerades,” may well have had roots outside Trinidad and Tobago, with Approo himself suggesting links with runaway slaves in the United States who were taken in by Native American communities in the early 1800s—a “cultural intermingling” that came to fruition in New Orleans’ famous Mardi Gras. 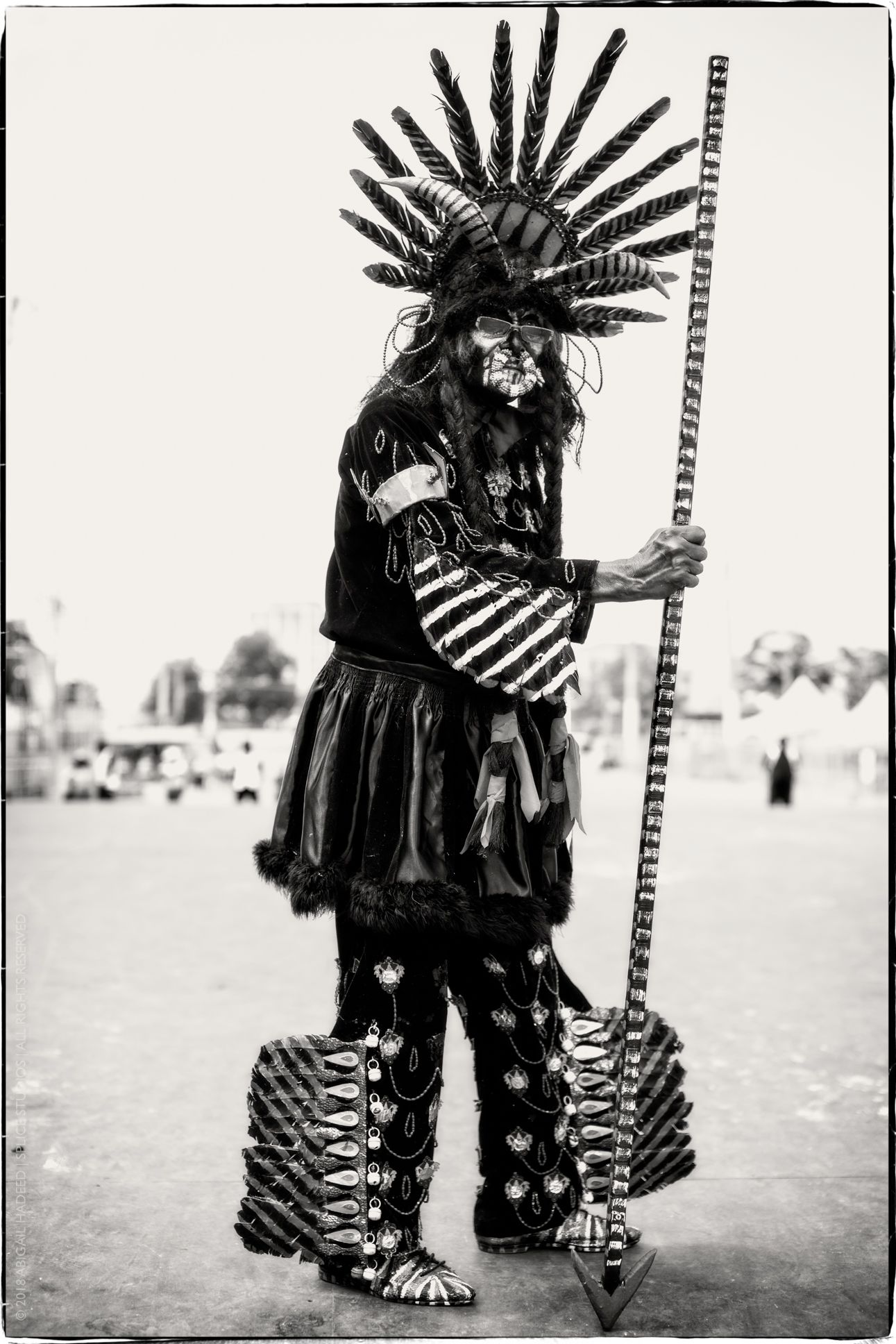 Okenaga—Narrie Approo portraying Black Indian in the band ‘The Warriors of Huracán,’ led by Patrick Anderson. This was Approo's last performance at Port of Spain's Queen's Park Savannah, in 2018. Photo by Abigail Hadeed, used with permission.

To be an authentic Black Indian, though, was not a matter of external trappings. An integral part of Black Indian masquerade is its own language, sounds and songs, evolving from Indigenous and African languages, the languages of the Spanish, French and English colonisers, and even Hindi, post-emancipation, when plantation owners introduced East Indian indentureship to fill the labour gap. Approo once said this aspect of the mas required commitment and practice: “We always went to the yard to rehearse our performance before we hit the road, and we chanted a prayer in black Indian language asking for strength.”

In photographer Maria Nunes’ book “A World of Their Own,” which is an ode to traditional mas, fellow Black Indian masquerader Darlington “Boysie” Henry said, “Narrie Approo was the Flying Agitan…he's a high grandmaster of language!”

Another key aspect of the mas is its hierarchical structure, with the Okenaga (king of the band) and Malerao (queen) in the leadership positions. Then, almost in military fashion—as documented by Nunes—are the Flying Agitan, Wagadaraja, Jeppetok and Jeepnaf­agna, with the Jeeps being the lowest ranking warriors. 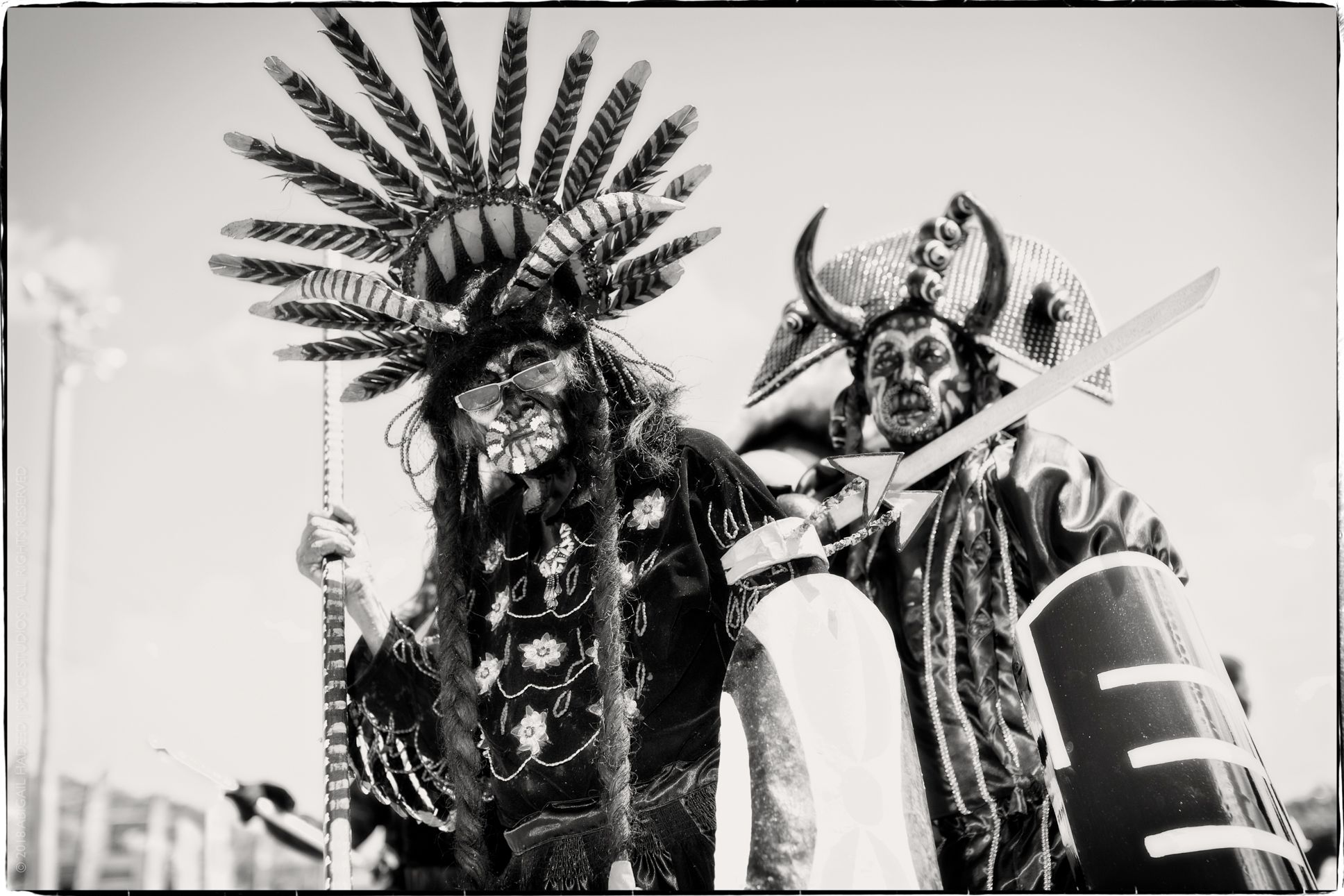 Okenaga—Narrie Approo (front) trailed by another member of the Black Indian band ‘Warriors of Huracán,’ on stage at the Queen's Park Savannah, Port of Spain, Trinidad, 2018. Photo by Abigail Hadeed, used with permission.

Photographer Abigail Hadeed, who has been documenting Black Indians for decades, is most captivated by the fact that the portrayals have a deep spiritual link with the once-banned Orisha faith as masqueraders “dance and chant through the streets […] rituals of a spiritual nature, wearing mostly black costumes handmade from local corbeau feathers, river beads, chip-chip or snail shells, and cow horns.” Though marginalised, she says, by the ever-increasing commercialism of the national festival, practitioners like Approo routinely “reclaim with apt ceremony what was denied during slavery and post-emancipation: the freedom of the individual, and of a people, to choose and celebrate their own spirituality, and to express themselves culturally.” 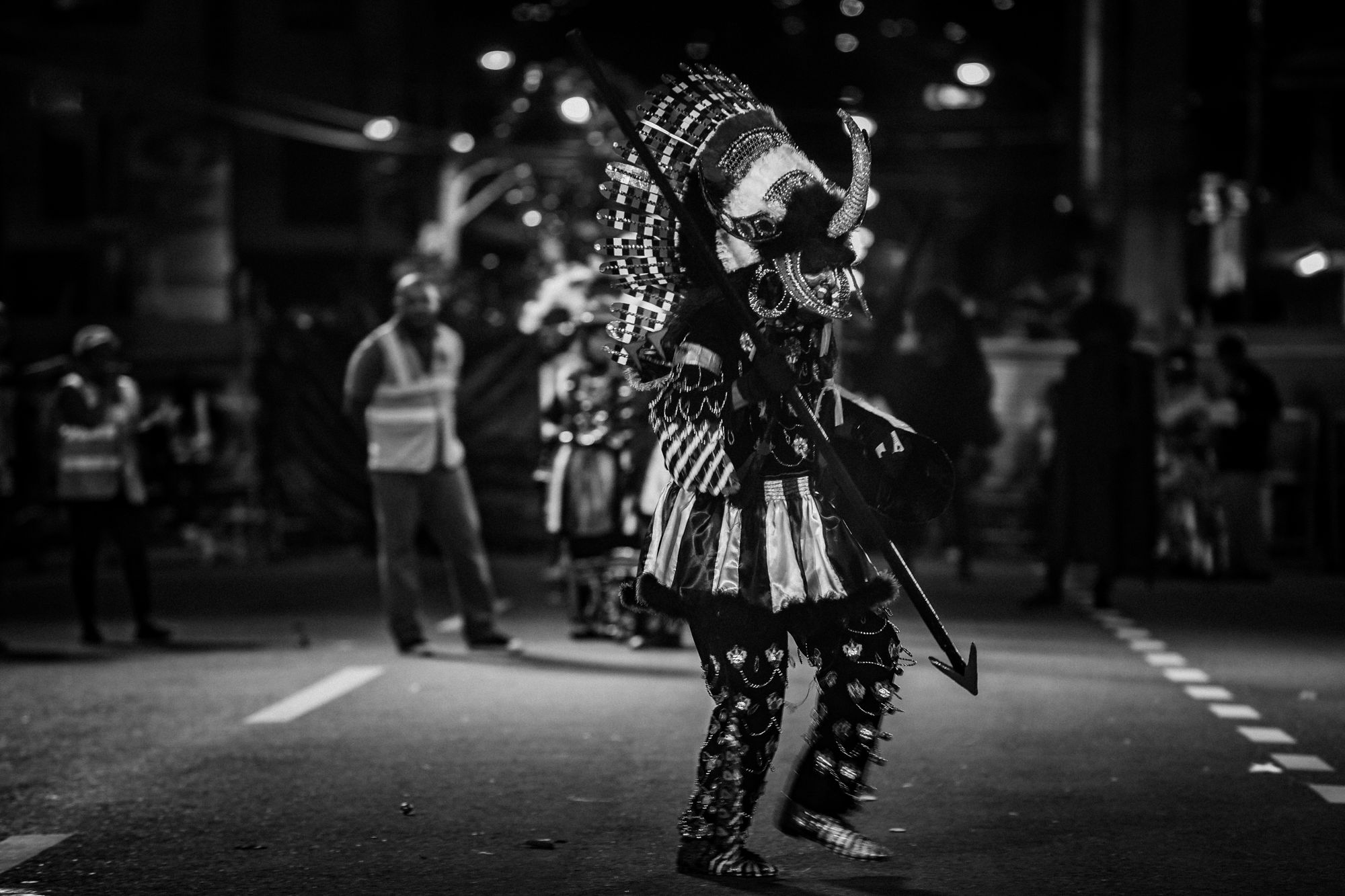 Okenaga—Narrie Approo, Victoria Square, Port of Spain, Trinidad, 2009, as he embodies the invaluable connection between a tradition that is as old as the society itself and an unknown future. Photo by Abigail Hadeed, used with permission.

Born in San Fernando, in south Trinidad, on April 22, 1927, Approo moved with his family to the capital, Port of Spain, when he was five years old. Living in John John, in an area of Laventille known as “behind the bridge”—a community rich in the creativity of all things Carnival, including the steelpan—Approo first participated in Carnival in 1934, playing his first Black Indian mas at the age of 11.

Inundating himself in every aspect of the festival, he also played tenor pan with a steelband called “Cross of Lorraine” (now known as “All Stars”). Back in those early days of the instrument finding its footing, the steelband movement garnered a reputation for being explosive, and violent clashes between different pan sides were not unusual. Approo experienced one of these scuffles when Cross of Lorraine got caught in the crosshairs of a fight between two other pan sides—”Invaders” and “Tokyo”—on Carnival Monday, 1946. But Black Indian mas was where his heart was, and Approo described it as “fighting mas,” which began with battles of language and skill and occasionally transmuted, just as the steelband wars did, into physical altercations. 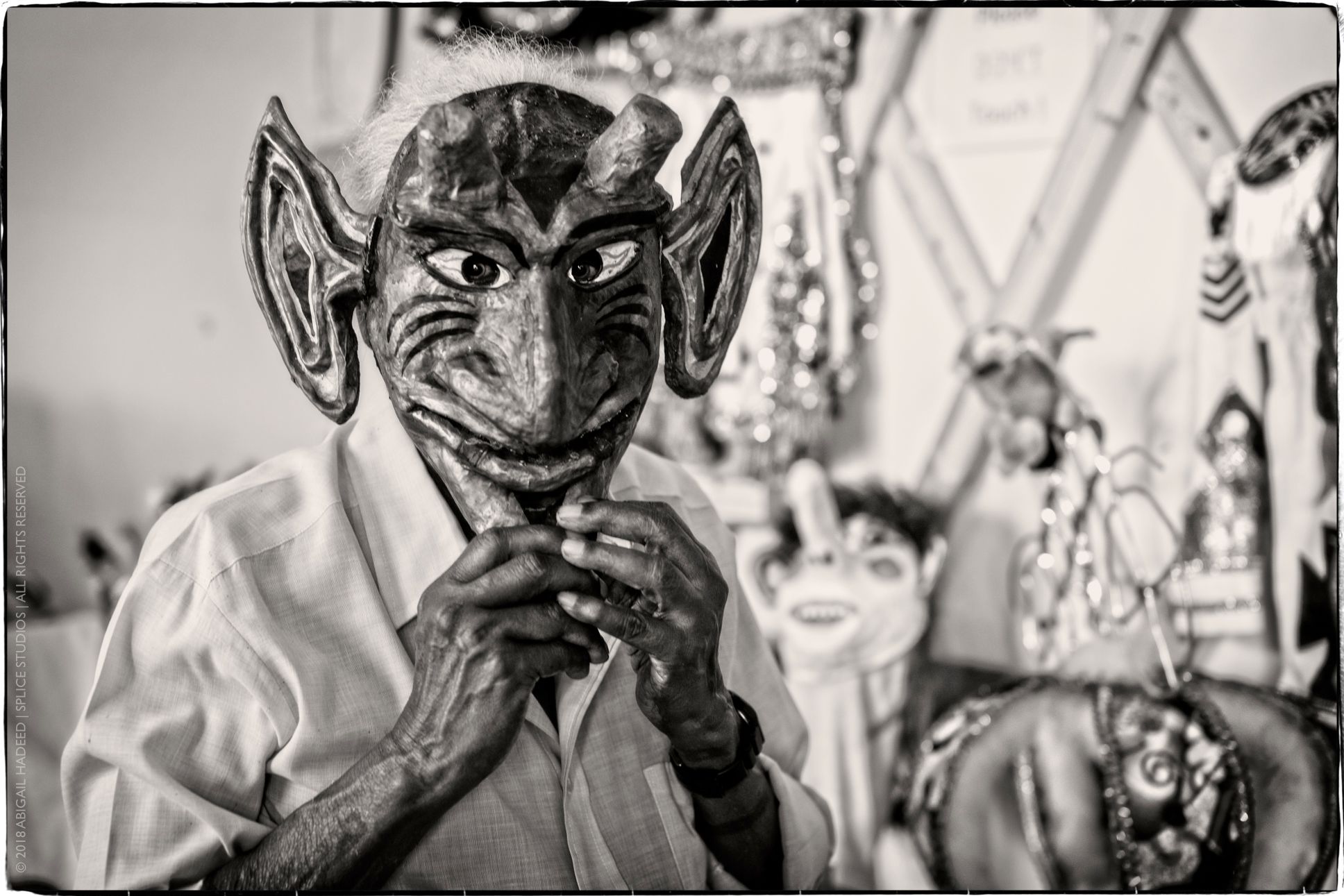 Narrie Approo behind one of his exquisite papier mache masks. Photo by Abigail Hadeed, used with permission.

Approo realised the importance of preserving his life's work in order for such Carnival traditions to be handed down. On February 12, 2021, he donated his extensive Carnival collection to the Alma Jordan Library at The University of the West Indies’ St. Augustine campus in Trinidad and Tobago. Kathryn Chan, who curated the collection, said on Facebook:

What a relief that Narrie Approo's work will be in a safe location and preserved (away from the threats of mildew, floods, fire etc). I now see that this is just the beginning. It was a very small and short gathering to honour Narrie, to take him to see The Alma Jordan library where his works will live on […] After Covid times, the universe willing, maybe I can take him back to see the actual collection. […]

This collection is only possible because Narrie was the chief archivist. He would have photographs taken every year, hunt down and collect any of him and his fellow mas players and place them in chronological order in multiple albums that date back to the 1960's. He saved articles and movie posters that he studied to make his own costumes. It is truly due to his own meticulousness that all of this has survived. 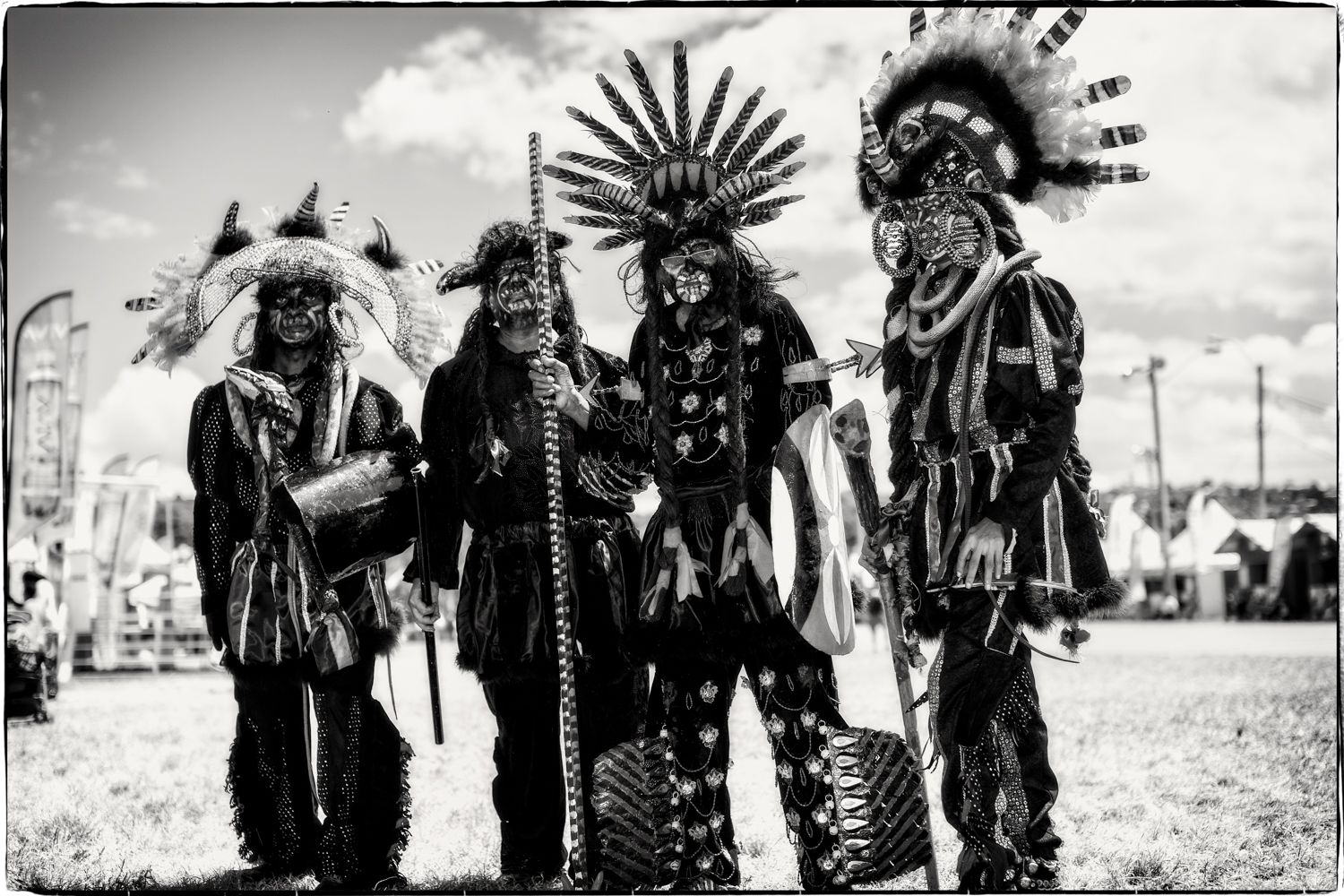 Okenaga—Narrie Approo, Queens Park Savannah, Port of Spain, Trinidad, 2018. The photo, by Abigail Hadeed, shows Narrie in costume (second from right), prior to performing on the Queen’s Park Savannah stage, the largest competition venue in Trinidad and Tobago Carnival. Approo came out of retirement to celebrate his friend, fellow Black Indian and the Flying Agitan, Dalington ‘Boysie’ Henry, who had recently passed away. Used with permission.

In 2018, Approo received the Hummingbird Medal, a national award, for his significant contribution to Carnival culture. It was also the year he would make his last public appearance as a Black Indian, coming out to pay tribute to his friend “Boysie” Henry who had recently died.

Upon learning of Approo's death, Maria Nunes shared some of her photographs on Facebook, saying: 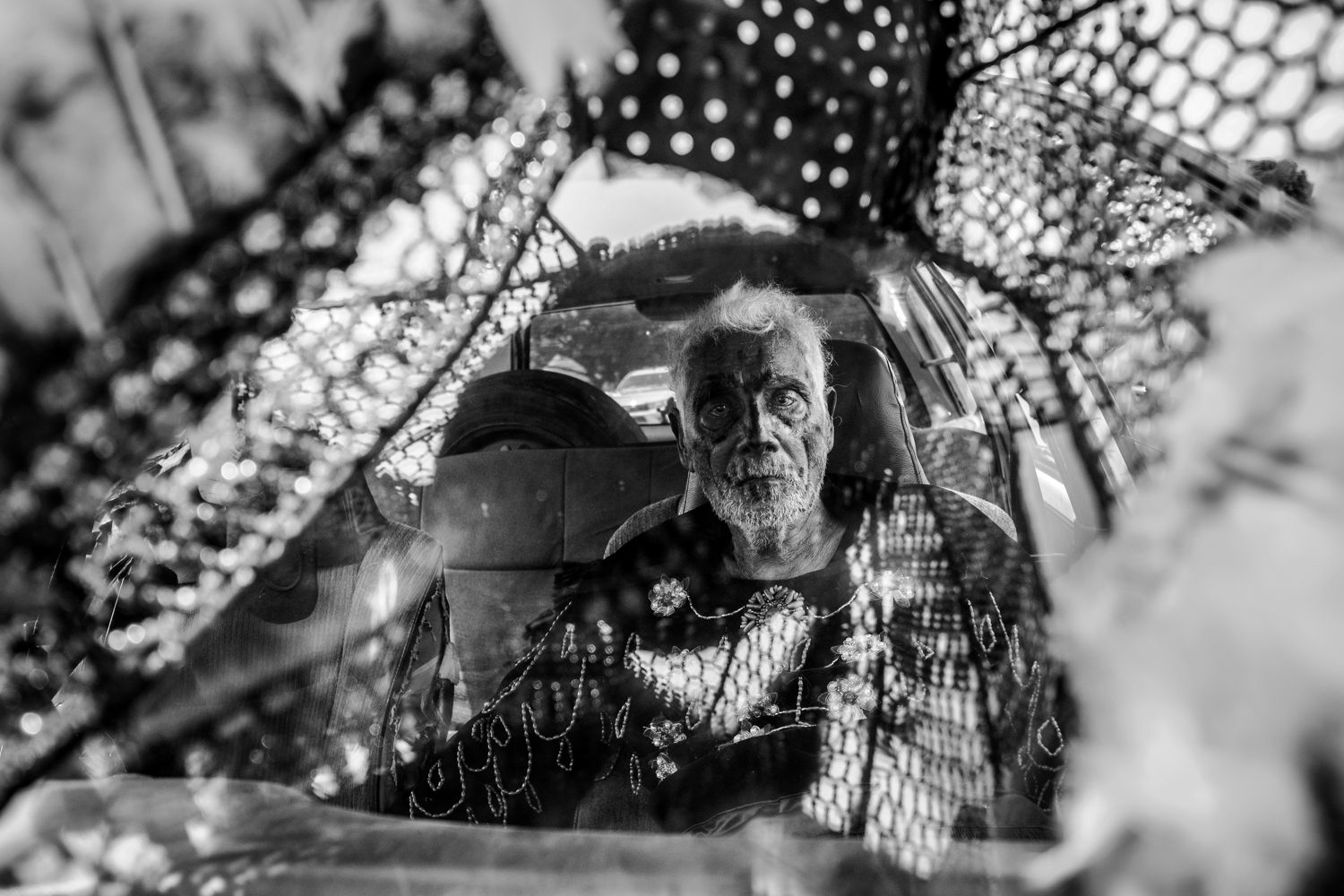 Narrie Approo after crossing the stage with ‘The Warriors of Huracán’ on Carnival Monday, 2018. The former Okenaga, who was initiated into Black Indian mas at 11, was the oldest living Black Indian. Photo of him through his headdress as he waited to be driven home, is by Abigail Hadeed, used with permission.

End of an era. […] Thank you for the example and your profound wisdom. 🙏🏽 You once said to me, quite simply and with much certainty in response to my question what is Mas? ‘Mas is Dance + Fight’.💥

Every molecule in my being reverberated and I was humbled and grateful and honored to be in your presence and felt empowered and blessed by your generosity of spirit and inherent humility and profound wisdom. Walk Good Masman 🖤🔥✊🏾