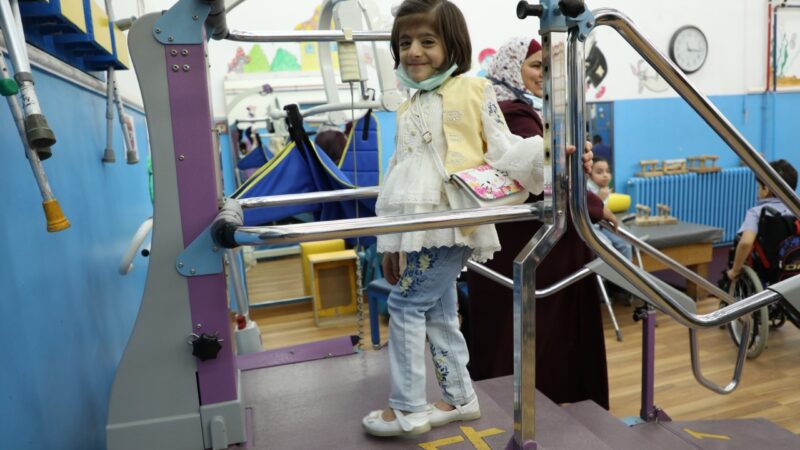 Situated within a residential cul-de-sac in west Amman, Jordan, a sloping path leads to the colourful sliding doors of the Al Hussein Society. For more than forty years, the Society has been dedicated to serving individuals with disabilities across the Kingdom. Today, it faces the threat of closure due to the economic challenges of the COVID-19 pandemic.

“Al Hussein Society for Child Welfare” was founded in 1971 by Her Royal Highness (HRH) Princess Majda Raad to provide services for, and empower, Jordan’s orphaned children. When a well-renowned centre catering to children with physical disabilities closed down, desperate beneficiaries approached the Al Hussein Society for support. In 1978, HRH decided to redirect the Society’s mandate to serve children with physical disabilities and expanded it to include a small primary school and a modest physiotherapy department.

The Society was soon overcrowded, and HRH noticed a great need for a larger and more professional rehabilitation centre.

Over the years, the Al Hussein Society transformed from focusing exclusively on child welfare to ministering all individuals with differing disabilities regardless of age, gender, or nationality. It became the only organisation in Jordan to assist beneficiaries without requiring any form of personal documentation. It was built by the public, for the public.

According to literature, disability prevalence in Jordan as of 2018 is estimated to be between 11 and 15 percent of the kingdom's population of over 10 million people. This means at least 1.1 million people rely on the support and services of the society.

Al Hussein’s history represents the history of the concept of disability in Jordan as a whole. It developed from a medical model into a social model.

Anni added to Global Voices: “We are not providing a complimentary service to individuals with disabilities. Our services are fundamental to facilitate their inclusion within their communities. It is our duty and their basic human right.”

The Al Hussein Society provides comprehensive rehabilitation services for persons with disabilities and their caregivers, at both an institutional and field level – reaching people who cannot reach them. It is a national resource centre for mobility aids and environmental adaptation, equipping beneficiaries with assistive devices and making their environment accessible.

Furthermore, inclusive education is at the heart of the institution, with a primary school built for differentiated learning and meeting the specific needs of each child. The Society also offers clinical training for university students in physiotherapy, occupational therapy, and inclusive education.

The modest physiotherapy department grew to include occupational therapy, psychosocial support, speech therapy, and hydrotherapy. Beneficiaries ranged from newborn babies to the elderly.

Demand for rehabilitation swelled as the Syrian crisis unfolded in 2011, with the prevalence of disability among refugees reaching more than 20% of the total population. The increased demand was soon followed by increased support, and the Society began offering partner organisations capacity building to help meet the growing needs.

By mid 2019, the Al Hussein Society was actively serving over 4,000 individuals across the Hashemite Kingdom of Jordan, through both its headquarters in Amman and its roving mobile clinics.

The 2019 peak for the Al Hussein Society fell with the arrival of the COVID-19 pandemic. Travel restrictions, numerous lockdowns, and the redirection of major donor funding, meant that the Society was facing its most challenging financial year yet.

In an interview with Jordan News, Jordan’s Minister of Social Development, Ayman Mufleh, stated that the “economic uncertainty caused by the pandemic caused many donors to reduce or even stop their support, which consequently affected the work and support the local charitable organizations do.”

“The Society’s survival heavily relies on development and income-generating projects. COVID-19 forced our donors to redirect their funding towards humanitarian relief efforts and all of our programmes came to a staggering halt,” says Ms. Mazagopian. “Over 100 employees’ livelihoods were threatened and we were unable to reach our beneficiaries, particularly in hard-to-reach areas where the need is greatest.”

An award winning organisation – the leading expert in the field of disability and rehabilitation in Jordan – was left unsupported.

The Threat of Closure

The Al Hussein Society is still recovering from the economic fallout of the pandemic.

“If urgent support is not offered to the Society in order to sustain its programmes, then it is at an extreme risk of closing down. The closure of this national institution would mean the termination of the only available model in Jordan that provides comprehensive and integrated rehabilitation services, which work towards attaining and maintaining the independence of persons with disabilities,” says Ms. Mazagopian.

The threat of closure looms ever closer, and thousands of beneficiaries stand to lose access to critical services, including specialised education and rehabilitation. Not only that, but organisations and partners working in the rehabilitation sector will also miss the opportunity of gaining half a century’s worth of knowledge and skills, which are on par with internationally recognised standards.

“Closing down the Society will heavily affect students academically,” said a parent of a child who benefits from Al Hussein Society’s education and rehabilitation services. “We cannot find better services for our children elsewhere, from both an education and rehabilitation standpoint…the teaching methods used at Al Hussein Society cater to and develop my son’s abilities,” said the parent.

Overcoming this financial crisis, however, is still within reach, Ms Mazagopian said, but it demands the combined efforts of all the Society’s stakeholders and members of the wider Jordanian community.