Some elements of the rituals date back to ancient, Vedic times 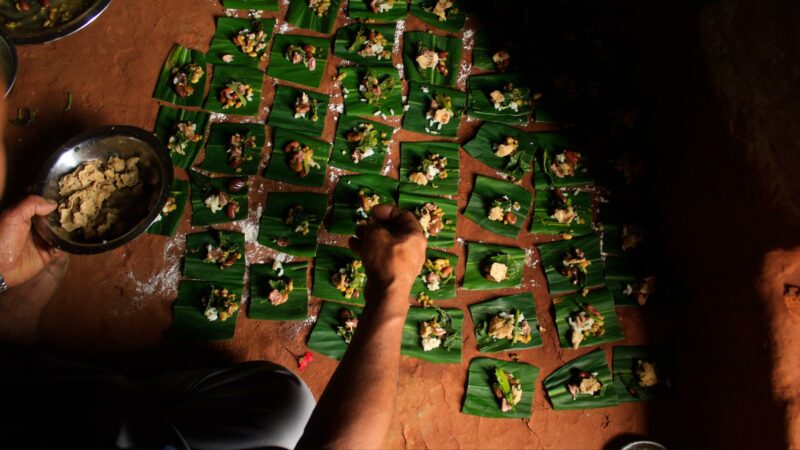 The Newar ritual of feeding frogs is immediately followed by the festive procession of the cow, which was actually the expected day for the monsoonal birth of the calves. Photo: Nepali Times Archive, used with permission.

This article by Gautama Vajra Vajracharya is based on a keynote address to the Madan Puraskar and Jagadamba Sri Award Ceremony in Kathmandu and was published in the Nepali Times. An edited version is republished by Global Voices as part of a content-sharing agreement.

Some monsoon- and cow-related Vedic concepts and rituals remain discernible in the annual religious observances of South Asia, particularly in the Indigenous Newar rituals and festivals of the Kathmandu Valley. This article explains my studies on the Vedic frog hymns, and the epithetic name of Vasudeva, father of the Hindu deity, Kṛiṣhṇa.

My investigation into the ancient Newar rituals and seasonal festivals, and particularly into the custom of frog worship, is related to my own life experience. Before I left Nepal for the United States in December 1974, I had never been outside of the monsoonal land of the Himalayan rimlands of the Subcontinent. While working with renowned art historian Pratapaditya Pal as a trainee at the Los Angeles County Museum of Art, I became familiar with important art history books by Zimmer, Coomaraswamy, and Kramrisch.

Because these scholars frequently refer to Vedic literature to explain Indian art, I began to take an interest in Vedic studies. After finishing my job at the museum, I entered the PhD program of the Department of South Asian Studies at the University of Wisconsin–Madison.

Compared to Kathmandu and Los Angeles, Madison is extremely cold. Winter lasts almost half of the year here, and the trees appear dead. Many varieties of birds migrate south, and reptiles, squirrels, rabbits, and frogs hibernate under the frozen ground. Cows remain inside their stalls for at least four months.

Only after snowmelt around the beginning of May does hibernation finally come to an end. The vernal sun enlivens the earth. All of a sudden, the bushes and trees turn fresh and green, the frogs come out and within a week they start croaking, which is, in fact, their mating call.

In most parts of South Asia, including the Kathmandu Valley, creatures do not hibernate—they estivate. During the hot summer season, snakes, turtles, and frogs hide inside the ground.

Water buffaloes and elephants cover themselves with mud and spend plenty of time in the water. Frogs and other estivating creatures emerge from the ground immediately after the first monsoonal showers. In accordance with the ancient tendency to reverse cause and effect, it was believed that it rains when frogs start croaking.

A careful study of the hymns also taught me of the existence of two different agrarian lifestyles in the world. In the regions in which frogs hibernate, planting begins after the vernal sun melts the snow and ice. This explains the prevalence of solar deities in these regions.

In the regions in which the frogs estivate, agriculture begins after the monsoonal rains, which is why in the Subcontinent rain gods rather than the sun god play the most significant role in cultural history.

This observation helped me to identify some of the great gods of Vedic Aryans, who originally belonged to a hibernation culture but gradually became the gods of monsoonal rain. According to the Atharvaveda, for instance, when the great god Varuṇa pours water from heaven, the frogs start croaking.

I quickly realised that Śrāvaṇī, the full-moon day of the month of Śrāvaṇa, is significant for many reasons. According to the Newar calendars, this is the day when the Himalayan river Sihlu, like the Sarasvati River, descends from heaven as a rain river. 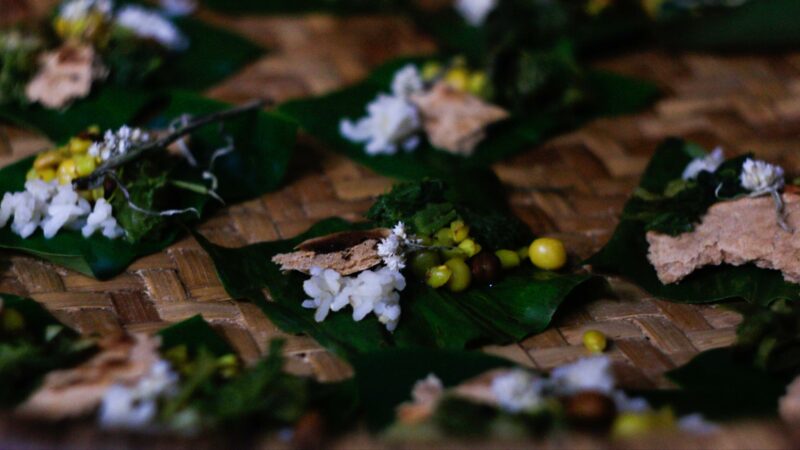 This is also the day when the Vedic academic session of the rainy season begins and disciples are invested with the sacred thread, upavīta, and thus become blessed with their second or spiritual birth and are qualified to learn the Vedas by heart.

On this day, all over South Asia, Brahmins, even now, ritually change their upavīta. On exactly the same day, the Newars of the Kathmandu Valley worship frogs.

Therefore, in Ramayana, the Sanskrit epic from ancient India, the following month, Proṣṭhapada, or Bhādrapada, was understood to be the first month of the rainy season.

Although I was familiar with all these traditional concepts when I wrote about the frog hymns, I was not sure about the origin of this system of reckoning time. It was only a few years ago that I became familiar with the Vedic ritual called vṛṣotsarga (release of bulls) a practical annual ritual related to the autumnal impregnation of cows with the expectation of the calves being born at the beginning of the monsoons when plenty of green vegetation becomes available for the mother cows and calves. 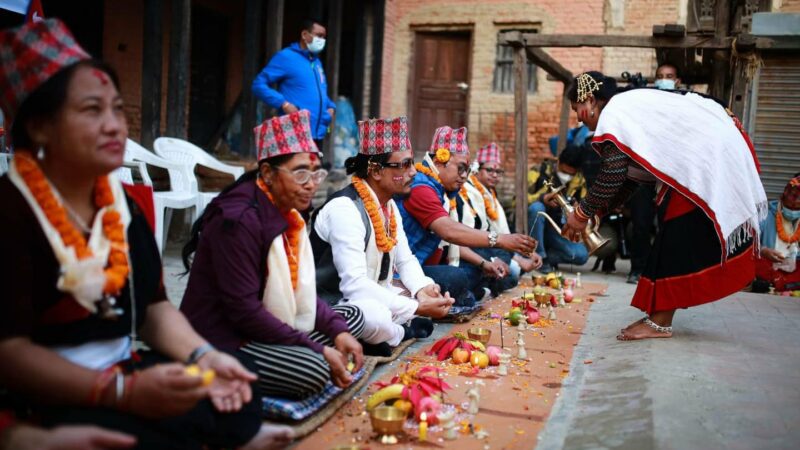 The Newar ritual of feeding frogs is immediately followed by the festive procession of the cow, which was actually the expected day for the monsoonal birth of the calves. Newar children participate in the cow procession by turning themselves into calves, wearing headgear decorated with the faces of cows. 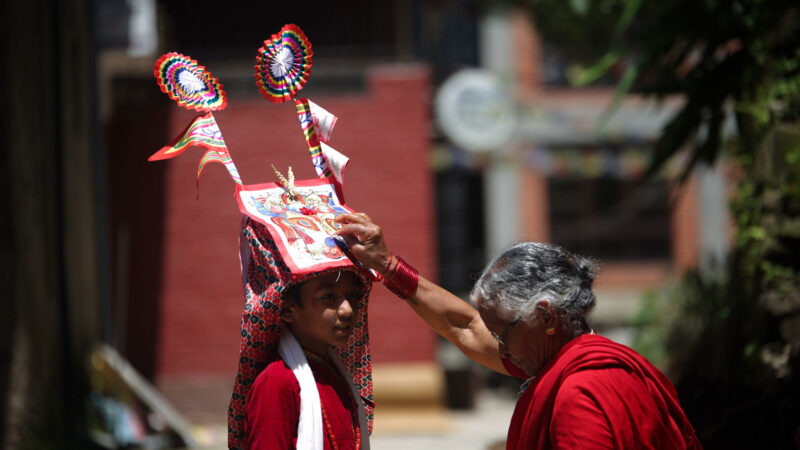 The eighth day of Krishna, or Kṛṣṇāṣṭamī, which is believed to be the birthday of Krishna, takes place exactly eight days after Śrāvaṇī, seven days after the monsoonal cow festival. This is because, in ancient South Asia, the birth of a baby was not celebrated on the exact day of the birth, but only when the chief dangers for a child and mother were past.

Thus, in Vedic literature cloud and rain symbolism of the drum also began to appear, alongside the solar cult. For instance, Jaiminīya Brāhmaṇa relates that the sound of the atmospheric drum causing the aerial waterspouts to overflow.

Vāsudeva’s epithet, Ānakadundubhi, may suggest that Vāsudeva received this name because originally, he was a divinity of the thunder cloud. His real name, Vāsudeva, the god of vasu, “agrarian prosperity,” resembles Vasudhārā, worshipped by Buddhists as the goddess of the rice paddy. The Vedic version of Vasudhārā is vasor dhārā, symbolically identified with a cow. Her milk is rain flowing from her udders as clouds. 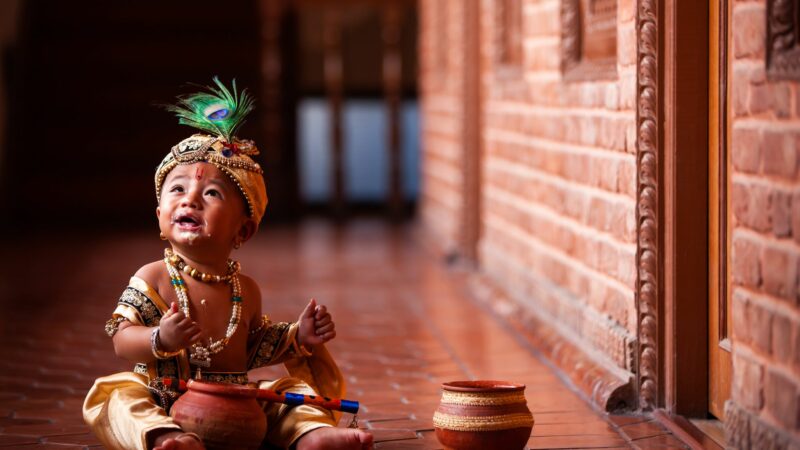 Agrarian wealth is also associated with frogs. According to the Rigvedic frog hymn 7.103.10, the greenish-yellow frogs which croak at the beginning of the monsoon are the givers of vasu. Thus, the celebration of the birthday of Krishna (the son of the thundercloud at the very beginning of monsoonal rains) clearly indicates that baby Krishna was a rain child.

In accordance with my recent investigation, the eighth day of the dark half of the month of Bhādra, which is considered the birthday of Krishna, was actually the Vedic Ekāṣṭakā, the eighth day after the full moon.

This is the reason that on the day of the cow procession of the Kathmandu Valley, baby Krishna participates in the festival together with real calves and children representing the calves. Baby Krishna was, indeed, an auspicious rain-child representing all newly born offspring of the year.