Out of darkness, hope: A New Year chat with Jamaican artist Richard Nattoo 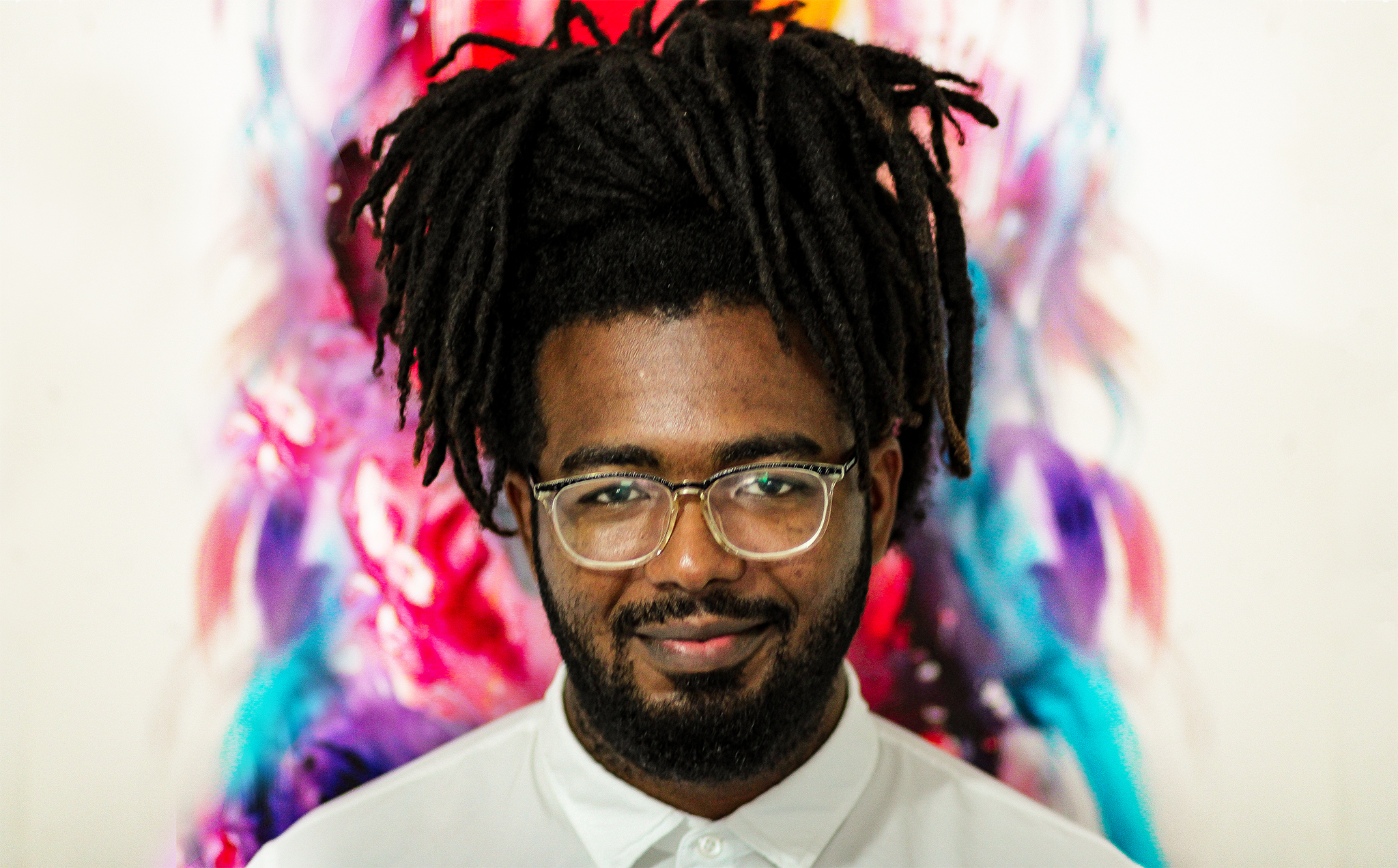 Jamaican artist Richard Nattoo is unapologetic about his need to keep exploring different genres and collecting new ideas and inspirations. He keeps moving, no matter where his subject matter takes him.

Born in 1993 in Spanish Town, where he still lives and operates from his light-filled, 140-square-foot studio, Nattoo was drawn to art while at high school and began exhibiting in 2012. He graduated from the Caribbean School of Architecture at the University of Technology in Kingston and in 2017 completed a residency at the Vermont Studio Centre in the United States. He has participated in several exhibitions at the National Gallery of Jamaica, including the 2014 Jamaica Biennial, as well as the 2016 Young Talent and Digital (2016) shows. Since then, he has continued to exhibit, including Lost in the Echo (2016), Sensory (2019), Fragility (2019) and Fragility II (2019). He is a recipient of the 2020 Prime Minister Youth Awards in the Category of Arts and Culture.

I sat down for a chai with Nattoo in a tea room at Kingston's Devon House, to find out more about how his work has evolved, even in the midst of a global pandemic. 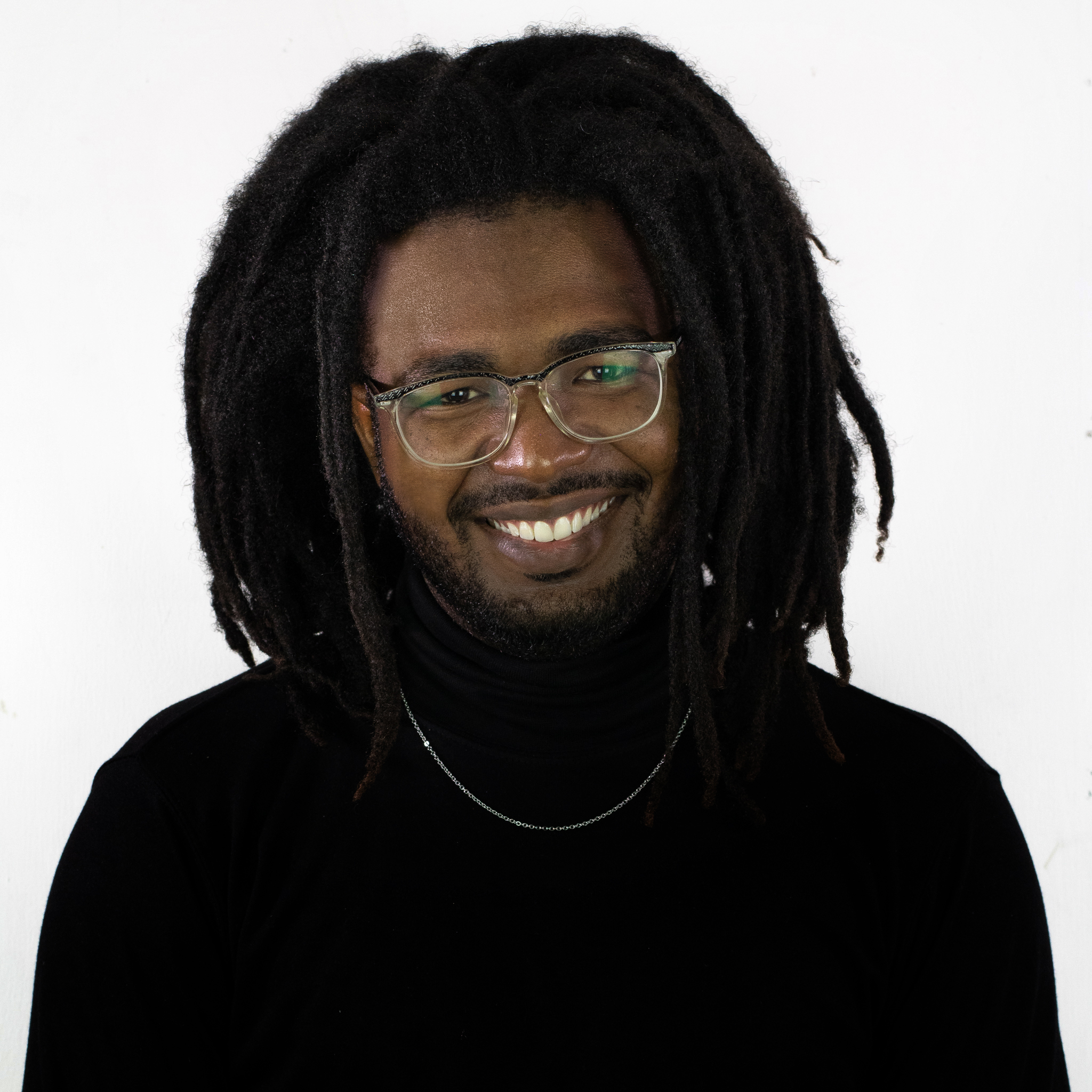 Emma Lewis (EL): Did you really get started as an artist by doing [mini]bus designs?

Richard Nattoo (RN): When I was at Ardenne High School in Kingston, a friend of mine was doing graffiti types of designs, with a T-square. He showed me how to do it, and I started cutting my own designs out of vinyl, the same material my friend was working with. These were stick-ons. I went to a car tint shop, [asked] for a job and went there for the summer. I did a lot of buses there, [including] small decals and stickers, and tried selling them to the bus owners. They liked what I was doing. 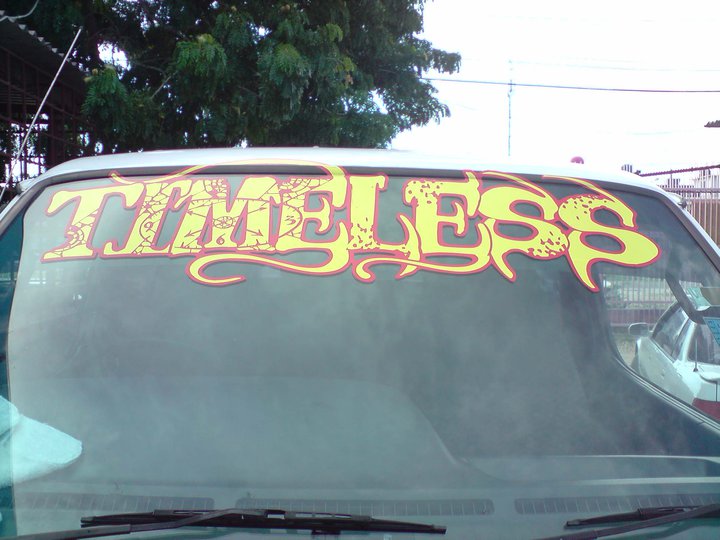 They said to me, ‘I want you to do a design for that bus.’ At the time, the big designs were ‘bashment’ [dancehall slang for a party] and ‘Bashment Granny’ [the name of a very popular ‘roots play,’ a farcical theatrical production typically dealing with socially relevant topics]. 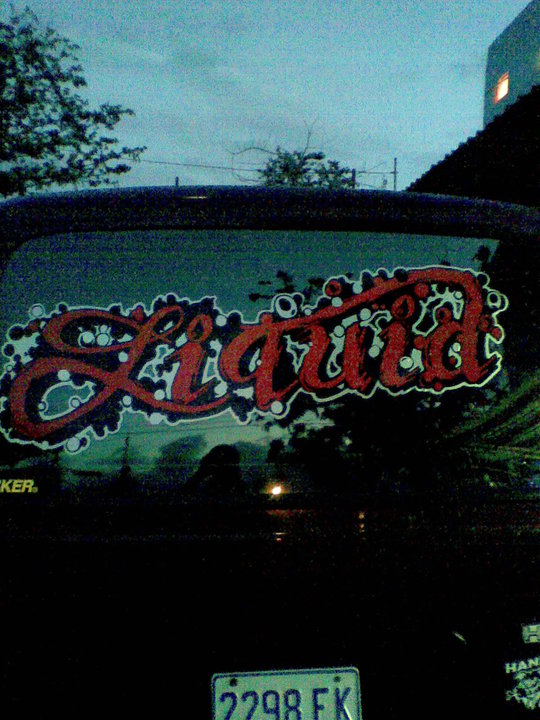 They were like a franchise really, with about five or six ‘Bashment Granny’ buses running. There was also a bus owner in Waterhouse who had his buses branded as ‘Liquid’. These were the ‘hype’ buses, where there was a lot of music and excitement, so passengers would wait for them.

It reached the point where I would get on the bus to go to school and the ‘ducta’ [conductor] would say to me, ‘I want you to do a sticker for this bus, can you do it for me by the end of the drive?’ So I would start doing a design while riding on the bus and finish it and they would pay me at the end of the ride and stick it on. These were on the body of the bus [and] were called ‘tattoos'—extravagant designs.

EL: What happened next?

RN: I had a rival, Michael Talbot. We’re best friends still—friendly rivals. We were invited to do a display of paintings at a creative event up at Hope Gardens in Kingston, organised by Antoinette Campbell of Speak Easy Jamaica. That was our first exhibition ever, in 2011. We were still at school, in sixth form.

RN: We did a lot of Tim Burton-esque paintings. A lot of my personal stories were in those paintings. I had a piece called ‘Pseudo Happy'—a man with a crooked smile, but inside was dark. I was going through different things in my life at the time. 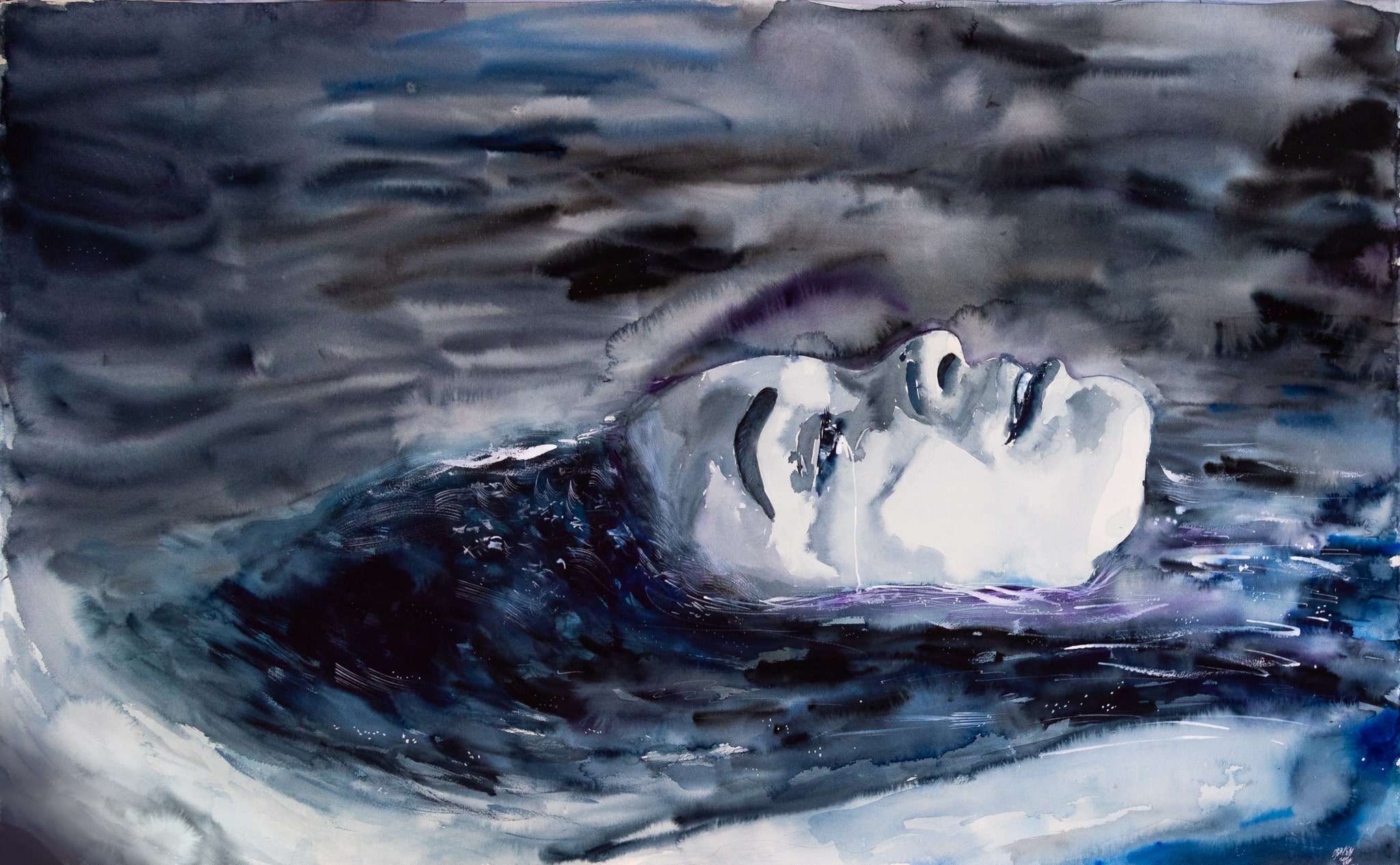 A Richard Nattoo painting entitled ‘Regret.’ Photo by the artist, used with permission.

My work has an element of fantasy. I wasn't as good at drawing as Michael, though. I looked for a different style that was ‘me’ so that we wouldn't be compared to each other. While I was an intern at the National Gallery preparing for the 2012 National Biennial, I got to see the work of Jasmine Thomas-Girvan up close. Ever since, she has been the greatest influence on my work. It is powerful stuff! I even did a painting or two with the red strings she used in ‘Dreaming Backwards,’ which won the Biennial. 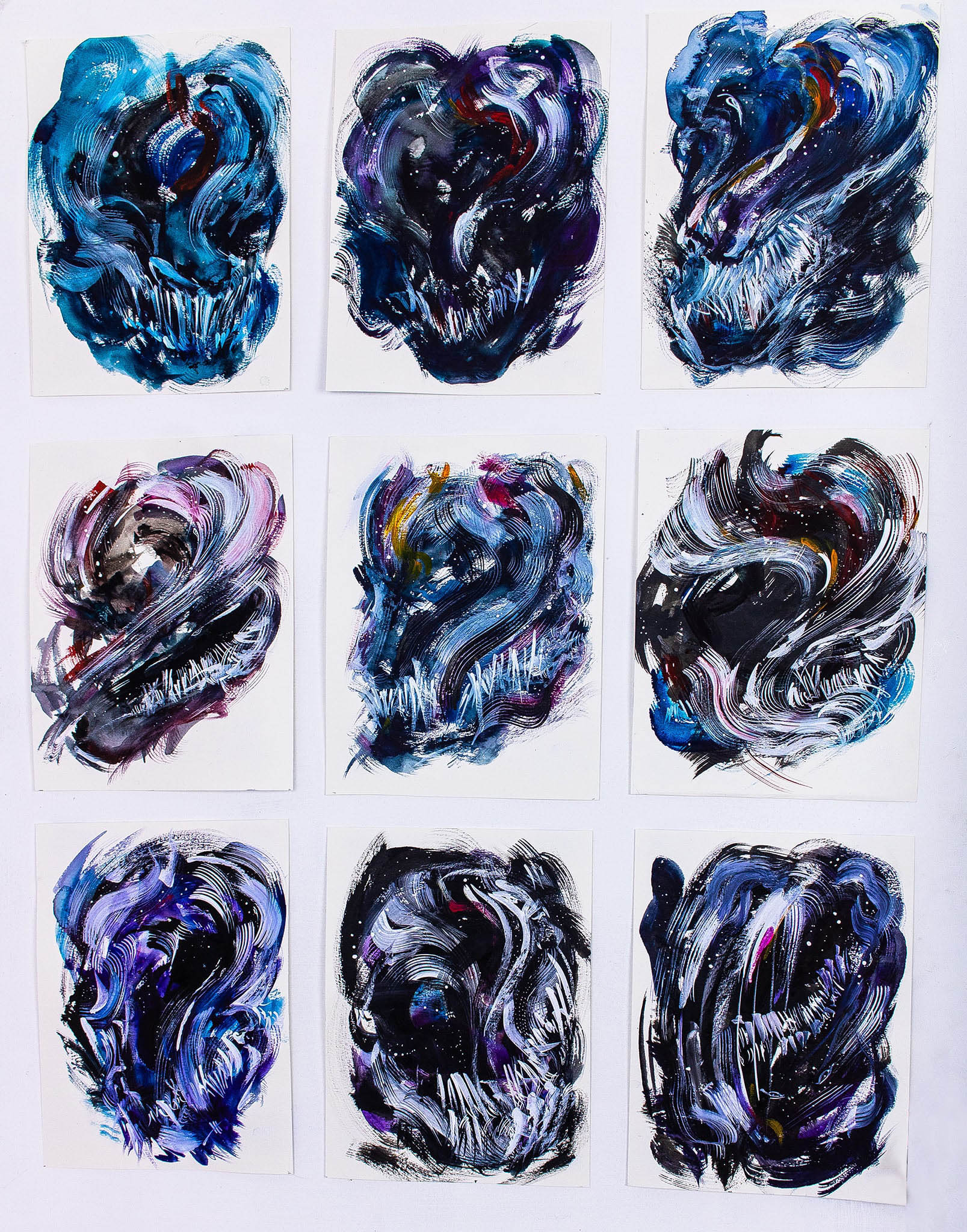 In my latest work, I have started looking at Francis Bacon. He has that darkness I first explored with Tim Burton’s work; I have taken it a bit further now. I've always been interested in exploring the human mind in my art. I have been reading Carl Jung: ‘The Human Shadow’ [and] started to wonder, ‘What does darkness look like?’ So in 2021, I did a virtual exhibition called ‘Teeth’—it was super-expressionist!—simultaneously with two other exhibitions, in September and October.

EL: Tell me about these three concurrent exhibitions.

RN: Recently, I have started painting figures. They have a melancholy feel. I tried to express that the darkness should not cloud your vision. It starts a conversation about fully accepting who you are.

So, I did a show about salvation, emerging from depression. It is a moving narrative, where you follow the figure and see where he is. The colours begin to get brighter as he reaches hope:

As I stepped further into the world I was engulfed by its messages. I paused to realize the depths I was under and it was then that a friend brought me the light. #silentecho #rabbit #cliff #art #pen #ink #illustration #darkness pic.twitter.com/7N27VabM6F

The last show was about my father taking us fishing [as children]. It was about the connection with water and nature.

EL: How did you get inspired by the animal world? Many of your earlier watercolours have depicted animals and birds.

RN: There is a simplicity about animals that I always enjoy. I still do paint them. A fox is just how a fox is—clean and pure. Peacocks are what peacocks are. It is about me trying to understand my own humanity, because humans are so emotionally complex. I have painted marine life in really swift strokes—I get the essence of them.

EL: In terms of humans, how do you see the current portrayal of Black people in art?

RN: There is so much of the Kerry James Marshall kind of imagery: people with very black skin—jet-black, not brown—it has been overdone. I want to do something different. 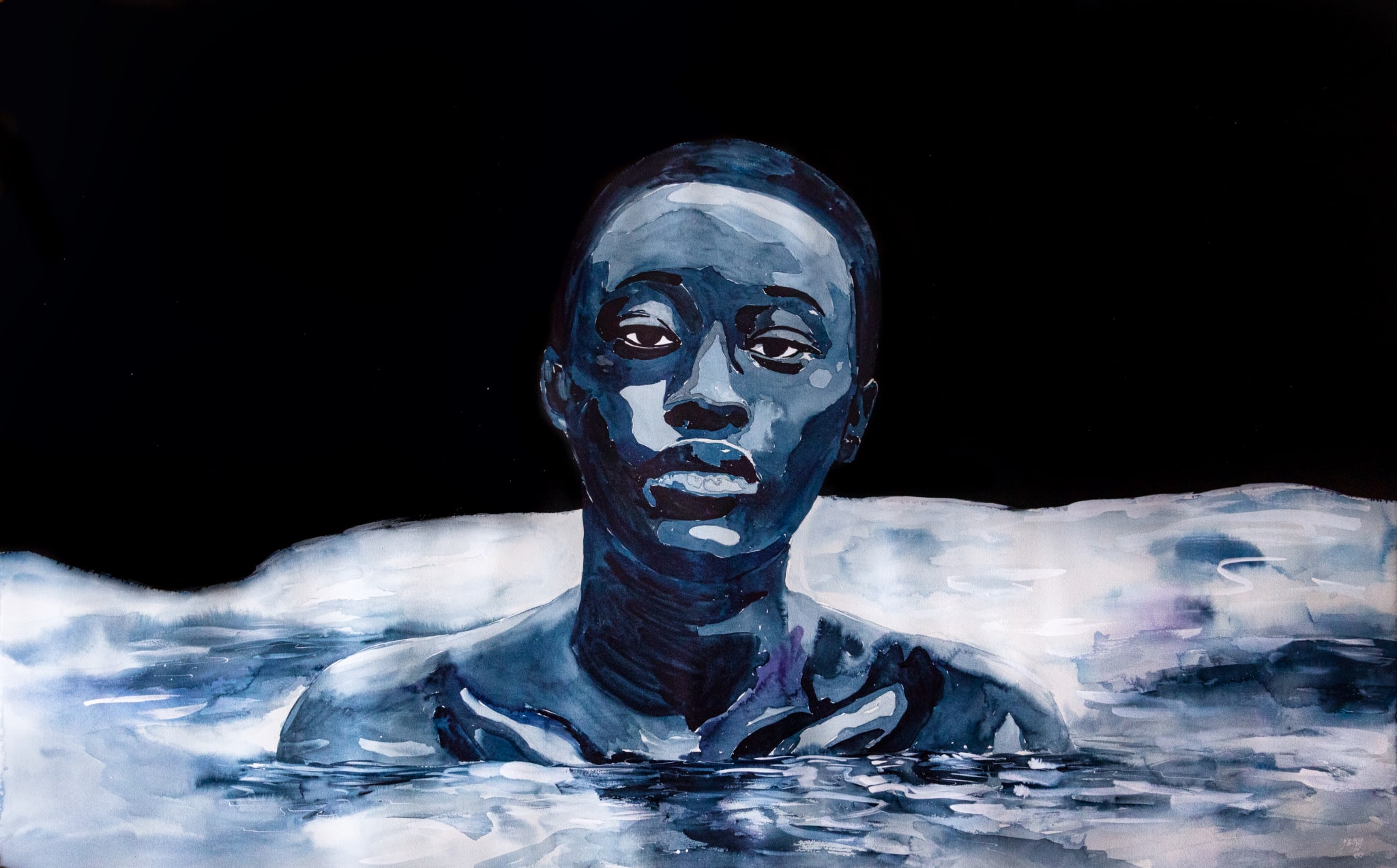 ‘Tread,’ a painting by Richard Nattoo. Photo courtesy the artist, used with permission.

I am scared to death of being stuck in that one phase. That’s why I started painting figures, because that was the hardest thing for me. I stepped over that hurdle. People, collectors for example, want you to go back and paint what you were doing before; but I like to keep moving on and working on new things. You have to keep painting what makes you happy as an artist. I am happy that I have found that spark—not just painting what I know would sell and what is ‘working’ in the art world.

It has to be true; if it’s not, people will see through it, and then you can’t talk about it properly. It has to be you.

EL: What are your plans for the next stage of your artistic journey?

RN: I have been working on children’s books [and other work] to pay the bills, and I will continue doing that. There’s a certain whimsical nature about them. They are simply fun. I am working on another book, writing and illustrating. 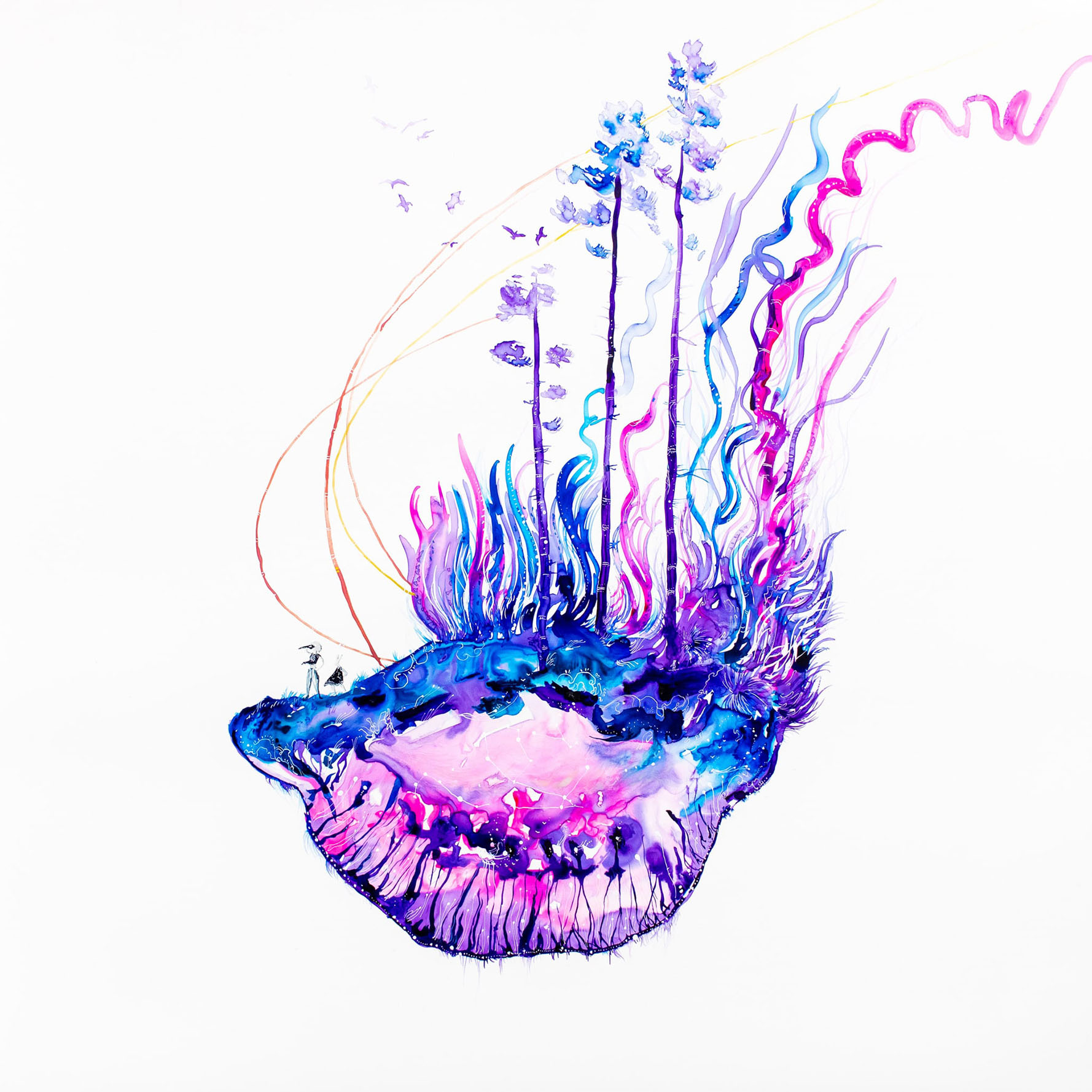 ‘Her Birth of an Echo,’ by Richard Nattoo. Photo courtesy the artist, used with permission.

I do quite a lot of digital work [like] logos and album covers. I separate that from what I do for exhibitions, which comes directly from my hand, with paint—magic stuff. I do watercolours—oil painting is scary stuff. I want to get some more work into international galleries and exhibitions. The art world is all about connections, so I keep working at it. With my art, I want to do things that others aren’t doing.

I have some more crazy ideas.